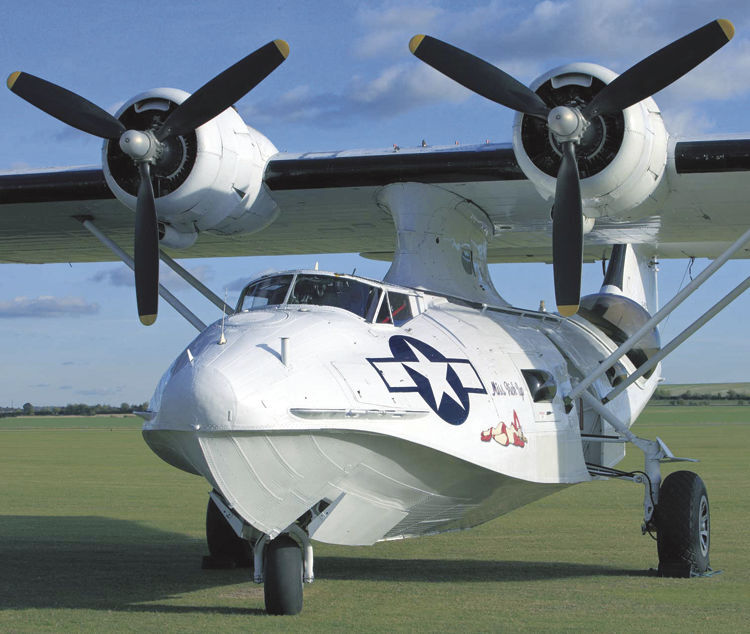 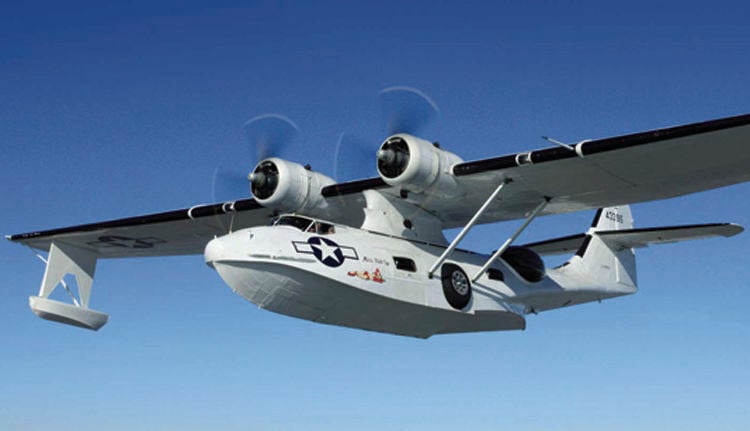 Miss Pick Up is a restored amphibious airplane from World War 2. It's based in England.

Miss Pick Up is a restored amphibious airplane from World War 2. It's based in England.

What is the link between the town of Grangeville in the north central part of Idaho, the famous Loch Ness in Scotland and the World War II flying boat known as the PBY or Catalina?

The answer is the world-renowned aero engine known as the Pratt & Whitney Twin Wasp.

The Twin Wasp, in this case the R-1830 version, was first produced in the 1930s and went on to be produced in huge quantities.

It powered many military aircraft before, during and after the Second World War and continues to fly in such venerable aircraft as the C-47 or DC-3 transport.

It is a radial engine with 14 cylinders in two rows of seven, one row placed behind the other, and it produces 1,200 horsepower.

Another aircraft powered by the Twin Wasp was the Catalina flying boat, better known in the U.S.A. as the PBY.

More PBYs were built than any other flying boat, and approximately 15 are still capable of flight worldwide. There is just one regularly flying in Europe.

Known as Miss Pick Up, she is painted to represent a particular United States Army Air Force Catalina based in Europe in 1945 that was lost whilst trying to rescue a downed pilot on the North Sea.

She flies at airshows all over Europe from her base at the Imperial War Museum airfield at Duxford in Cambridgeshire, England, and her amphibious capabilities make her equally at home on land and on water.

She is owned by a group of shareholders and operated by Plane Sailing Air Displays Ltd.

In October, Miss Pick Up was hired to carry out some filming on Loch Ness in Scotland for a United Kingdom TV program.

After two days of flying in the wonderful Scottish scenery along the Loch, the filming was completed and the crew prepared to leave the Loch to fly back to nearby Inverness Airport.

But just occasionally, old machinery can let you down. And on this occasion, the starboard engine failed to start, leaving the Catalina and its three-man crew stranded on the water at the mercy of the weather and with dusk rapidly approaching.

Eventually, the Loch Ness lifeboat crew came to the rescue and they achieved the difficult task of towing the heavy aircraft to a mooring buoy.

In due course, an open-air engine change was carried out by engineer Garry Short on a miniscule quay beside the Loch, and the Catalina is now safely back at her Duxford base.

So how does Grangeville, Idaho, fit into the picture? Well, despite the huge numbers of radial aircraft engines built, the skill set in stripping down and rebuilding them has gradually disappeared.

The result is that there are only a few engine shops around the globe that can be relied upon to carry out deep maintenance and fault rectification.

Garry Short has the ability to carry out day-to-day servicing and some fault rectification. But when it comes to major work, the plane owners have relied upon the Grangeville company Anderson Aeromotive Inc. to do it for them.

The plane owners trust the company, which has been based in Grangeville since 2002, with all the engine rebuilding requirements, and over the years they have developed a great relationship.

So in the very near future, the failed engine will be freighted to Grangeville where the problem will be analyzed and rectified by the specialist team there. It is currently en route.

And in due course, it will wing its way back to England and be flying again in the 77-year-old Miss Pick Up.

Find out more about Miss Pick Up at www.catalina.org.uk.

The author is a Catalina researcher and writer and flies in Miss Pick Up as Crew Chief.