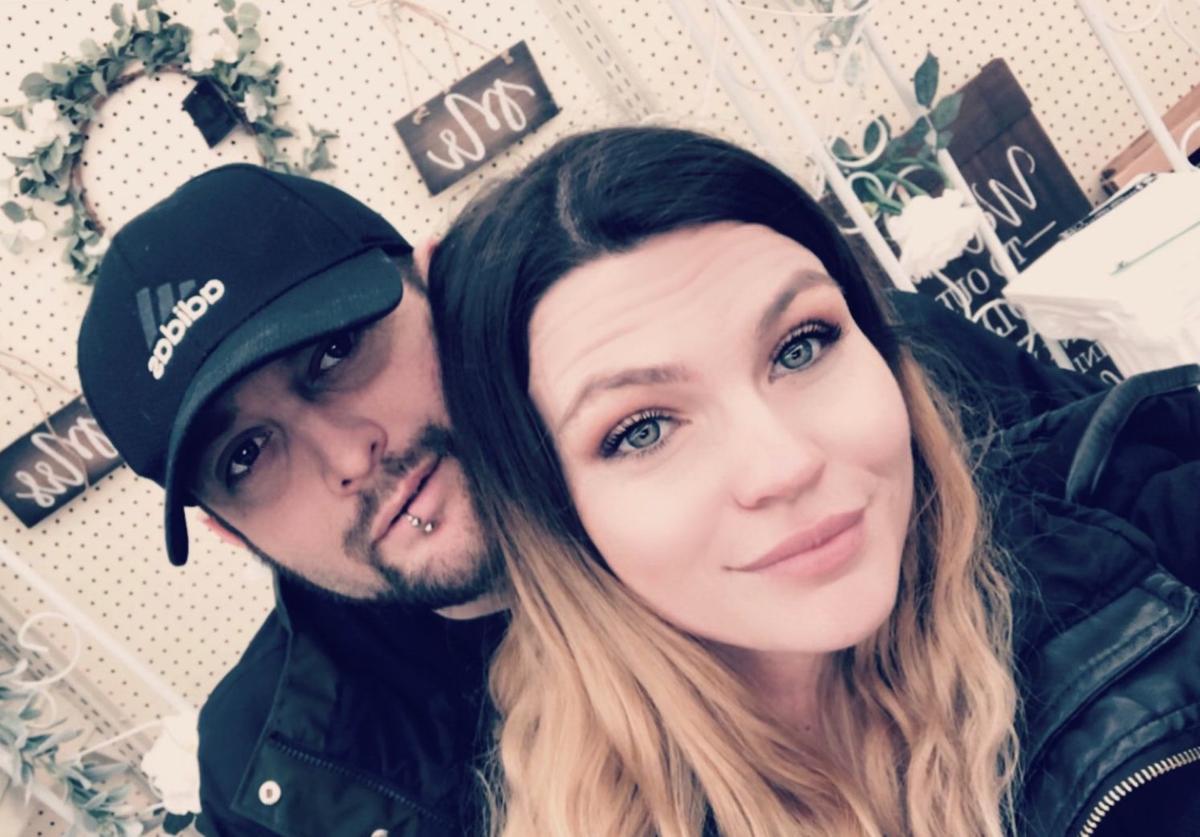 VyDelia Turner, left, poses for a photo with her fiance, Steven Hensley. Both Turner and Hensley were attacked by three pit bulls at a Pocatello home last week. 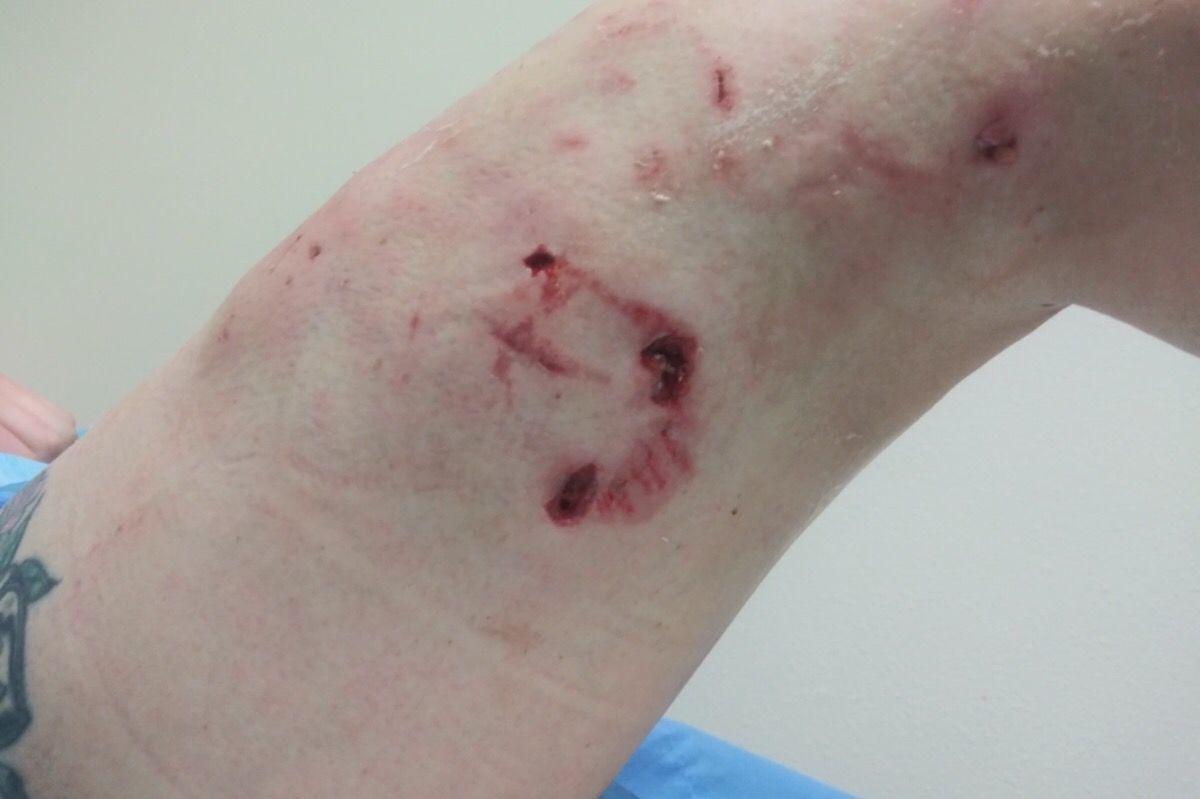 Puncture wounds to the leg of VyDelia Turner, who along with her fiance, Steven Hensley, was attacked by three pit bulls at a Pocatello home last week.

VyDelia Turner, left, poses for a photo with her fiance, Steven Hensley. Both Turner and Hensley were attacked by three pit bulls at a Pocatello home last week.

Puncture wounds to the leg of VyDelia Turner, who along with her fiance, Steven Hensley, was attacked by three pit bulls at a Pocatello home last week.

A local woman is recovering from serious injuries to most of her extremities after she says three pit bulls she knew suddenly attacked her inside a family friend’s Pocatello home last week.

VyDelia Turner, a 22-year-old resident of McCammon, says she sustained serious bite and puncture wounds to her hands, arms and legs when the large pit bulls violently attacked her last Thursday. She said she’s also relived the harrowing experience in her nightmares.

“This has definitely changed my views of large dog breeds,” Turner said. “I have experienced nightmares and flashbacks since the ordeal. I didn’t think I was going to make it out of the attack alive, and if I wasn’t by the front door I would not have made it out. Those dogs tried to kill me.”

The pit bull attack against Turner was the second recent incident in which the breed caused a significant disruption in the life of a Southeast Idaho resident.

On April 30, two escaped pit bulls in the area of North 12th Avenue in Pocatello allegedly mauled two cats to death, prompting the owner of the cats to pursue charges of owning a dangerous dog against the dog’s owner.

Turner said the incident began to unfold Thursday afternoon when she arrived at a family friend’s house in west Pocatello. Turner’s fiance, Steven Hensley, and her 16-month-old daughter had intended to come inside as well but remained in the car for Turner’s visit, which was meant to be very brief, she said.

After entering the gated yard and front door of the home, three pit bulls — of which the homeowner owned one of the dogs and was dog-sitting the other two — greeted Turner at the door with wagging tails and playful licks, she said.

“I had been around all of the dogs before, and one of them — the homeowner’s dog — I was quite familiar with,” Turner said. “But after our first conversation, the homeowner had laid back down on the couch and had her back to me. I took two steps toward the couch and that is when the first pit bull attacked.”

The homeowner’s pit bull was the first to attack Turner. The dog bit her on the left hand, locked its jaws and began yanking her away from the couch. At this juncture, one of the other pit bulls latched onto Turner’s calf and jerked her to the ground before biting down on her leg again. The third pit bull grabbed Turner’s upper right arm. All three dogs then began pulling in opposite directions with their jaws locked into Turner’s flesh, she said.

“During all of this, I somehow made it to the door while the homeowner was trying to get her dog off of my hand,” Turner said. “I made it to the door and was screaming loudly enough that my fiance heard me while sitting in the car with the windows up.”

Hensley came running into the house and proceeded to put the largest dog, the one attached to Turner’s arm, into a choke hold, eventually causing the canine to loosen its grip enough for Turner to wrestle free, he said.

“I was in the car and thought I heard screaming, so I rolled the windows down and heard more screaming,” Hensley said. “As I approached the house I could see the dogs were just throwing her around like a doll. I choked the biggest one out and one of the others bit me on the leg. VyDelia and I were able to get free and we ran out of the house, into the car and rushed ourselves to the hospital.”

Turner says that in addition to a finger broken in two places, she endured multiple severe puncture and bite wounds to her arms and legs. Currently, she has over 40 stitches holding her wounds loosely together to allow them to drain and is scheduled for additional sutures and a surgery to mend her broken finger later this week.

“The doctors want to make sure that there is no infection growing before closing everything up,” Turner said. “I also have puncture wounds down my arm and leg all the way down to my ankle. I was in the hospital for about four or five hours before I was released.”

Though a Pocatello Animal Services officer was dispatched to the home where the attack occurred and recommended Turner press charges against the homeowner, Turner declined. She said that she felt as if the dogs were responsible for the attack and not the person who was in charge of watching them and didn’t think it would be fair to punish the homeowner.

Photos of Turner’s graphic injuries are posted to an online fundraiser established to assist her with medical bills. Accessible by visiting tinyurl.com/help-vydelia, the gofundme.com fundraiser had raised $345 of its $5,000 goal as of Monday evening.

Despite the frightening ordeal, both Turner and Hensley say they don’t blame pit bulls as a breed for the attack, although both said they have now developed a “healthy fear” of large dog breeds.

“I want people to know that I don’t hate the breed and that they were acting as a pack, good or bad,” Turner said. “They were in their own home and they attacked me because I approached the homeowner while she was lying down in a vulnerable position. The one that came after my arm after I was on the ground is typically super sweet, has never been aggressive and is great around my kid.”

Turner added, “But this has changed my views on large dogs. We have two boxers in our home that we love and it was hard coming home knowing that I have big dogs in the home, but they’ve been a big help to make me realize not all dogs will behave like that.”

Hensley says he has always been somewhat afraid of pit bulls because they can be wild and unpredictable, even with the best training.

“When a pit bull loses it, they can just be unstoppable,” Hensley said. “Once it goes primal, there is just no stopping them; they are too strong and too powerful.”

Hensley continued, “I think something like this could happen with any dog, but a smaller dog sees the owner as the alpha and for dogs like pit bulls or bigger breeds, they will not listen to their owners if they feel like the alpha. I think that if you want to own a pit bull or other large dog like a Rottweiler, then you should have to own a special license that shows you can properly control them.”