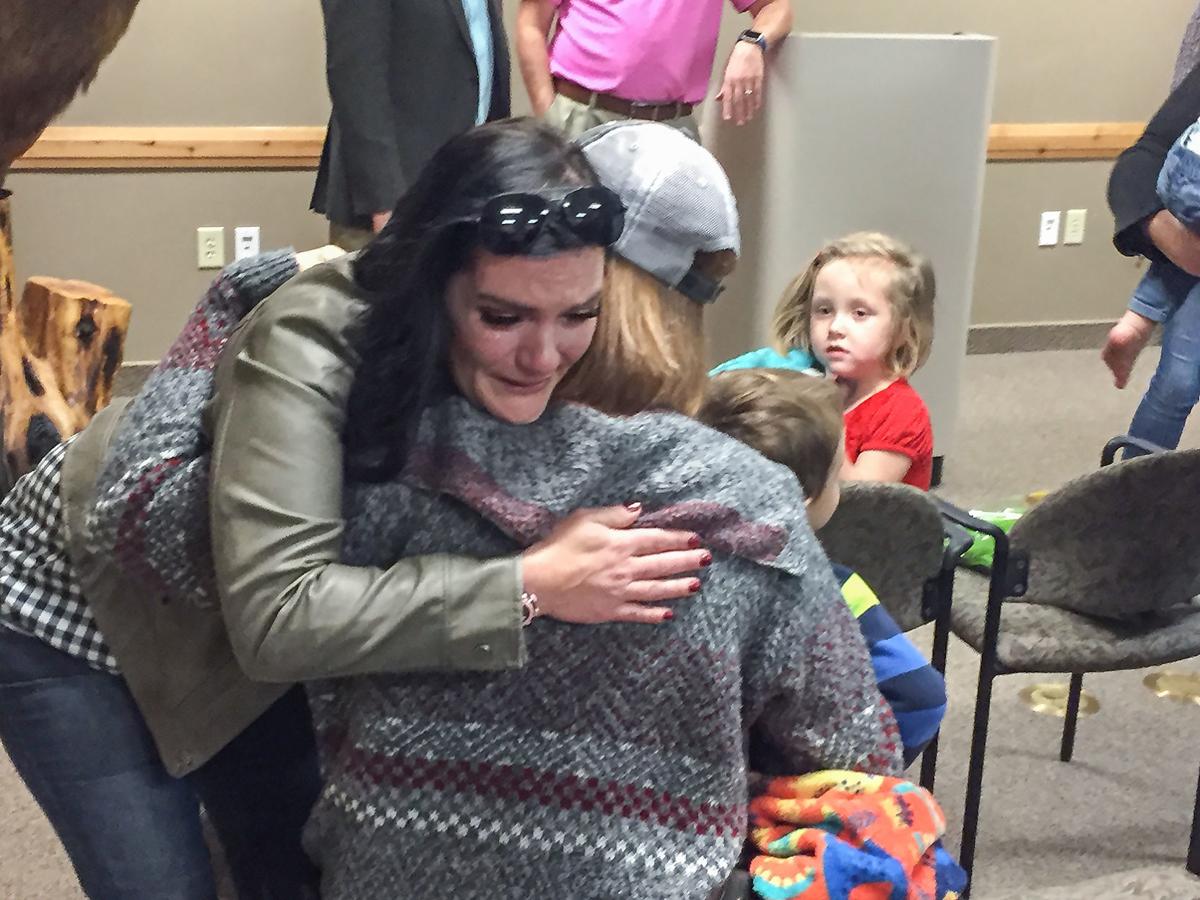 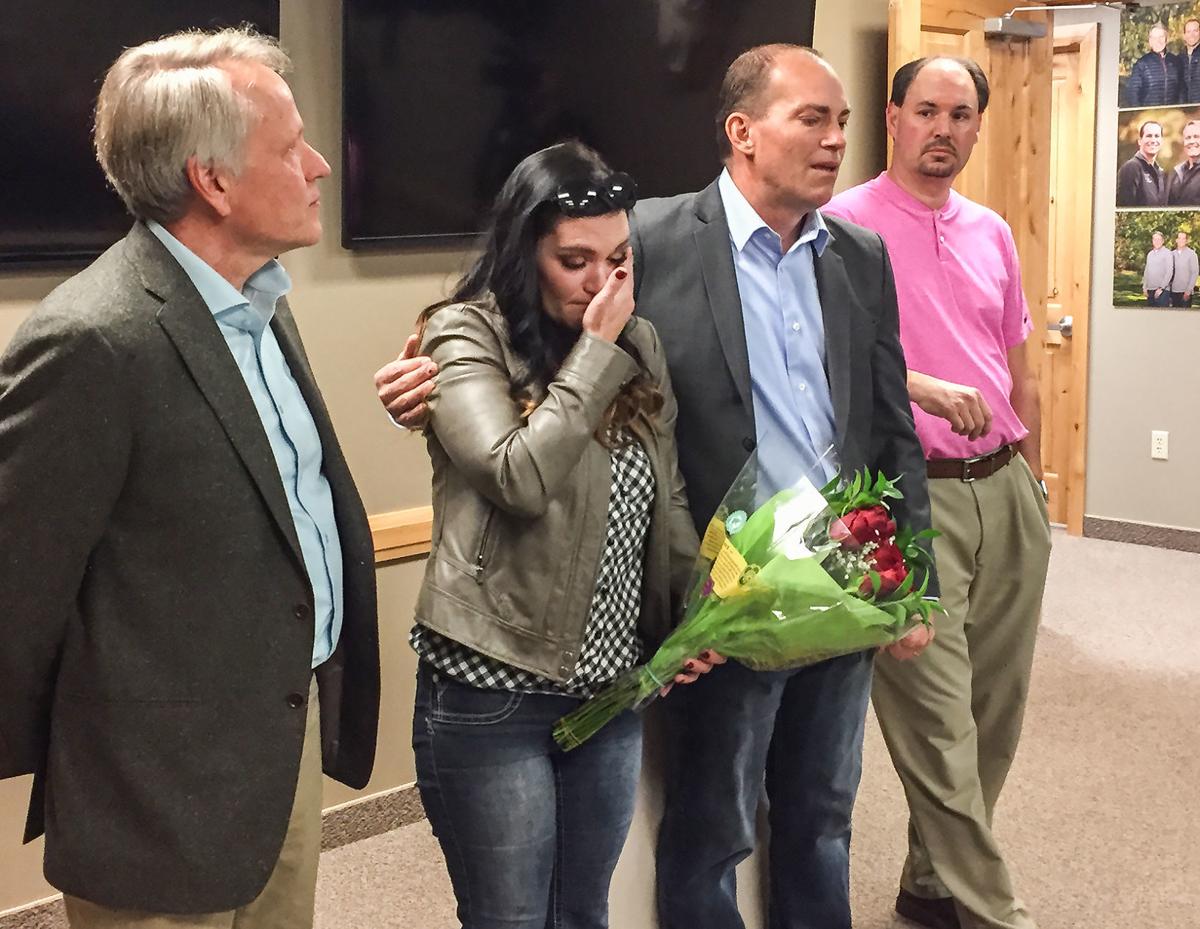 From left, Dr. Mark Baker, Hannah Lyngar, Dr. Shawn Jepsen and Dr. Kyle Sieman are pictured at the event announcing that Lyngar is the winner of their first Second Chance program and will receive a free set of teeth. The event took place at the Oral Surgery Specialists of Idaho office in Pocatello on Thursday.

From left, Dr. Mark Baker, Hannah Lyngar, Dr. Shawn Jepsen and Dr. Kyle Sieman are pictured at the event announcing that Lyngar is the winner of their first Second Chance program and will receive a free set of teeth. The event took place at the Oral Surgery Specialists of Idaho office in Pocatello on Thursday.

POCATELLO — Soon, the arrival of a low-pressure system won’t cause Hannah Lyngar excruciating tooth pain, and the 27-year-old mother of four won’t need to buy ibuprofen in bulk.

Thanks to a group of local business leaders in the dental field, the Georgetown woman looks forward to eating nuts — which, at the moment are too hard for her brittle teeth — and to chewing meat without pulverizing it first in a blender.

Through their new Second Chance program, they’ll donate the surgery for her full arch restoration treatment. Dr. Kyle Sieman, of Sage Dental, will contribute restorative dental services, Parkway Dental Lab will donate the laboratory work, and Biomet 3i will pitch in the parts and pieces for her dental implants. The combined work is valued at about $50,000.

“I’ll get to eat steak again!” Lyngar said, fighting back tears during a ceremony at the oral surgery center that included her friends, staff from the participating businesses and local dignitaries.

She was accompanied by her four young children. Her husband, Marcus, who works as a long-haul truck driver, witnessed the surprise announcement via Skype.

During her pregnancies, Lyngar suffered from a complication characterized by severe nausea, vomiting and weight loss, called hyperemesis gravidarum. The condition caused her teeth to deteriorate — to the point that she’s missing many teeth and others are broken.

“Babies already take a lot of calcium, and then you’re puking all day long, and there’s acid on your teeth,” Lyngar explained.

She broke her first tooth while chomping into the crust of a Hot Pocket about five years ago. For the past few years, she and her husband have tried to save money needed for the procedure, but more pressing expenses always seemed to surface that set the family back to square one.

To avoid embarrassment, she’s taken to speaking so that her lips hide her teeth.

“It means I can smile with my babies without them saying, ‘Eww, gross, Mom!’” Lyngar said.

Dr. Baker explained Lyngar will initially be given a set of temporary teeth, which will be replaced in about six months with a permanent set.

“She will leave with a beautiful smile,” Baker said.

Choosing a single recipient from so many worthy applicants was a difficult task, Baker explained.

“The stories were incredible,” Baker said. “We wanted to help everybody, and it was so difficult to take 450 and narrow it down to one person because every story was so heartwarming.”

Friends of Baker’s nominated one of the semifinalists who wasn’t ultimately chosen. The couple decided that rather than exchanging Christmas gifts this year, they’ll cover dental expenses for the person they nominated for the Second Chance program.

Baker said another semifinalist who wasn’t chosen was happy to simply be in consideration and was pleased to know that someone else would be helped by the gift.

“What a great attitude,” Baker said.

Dr. Jepsen added, “There is a great feeling that comes to us as we serve those we live with.”