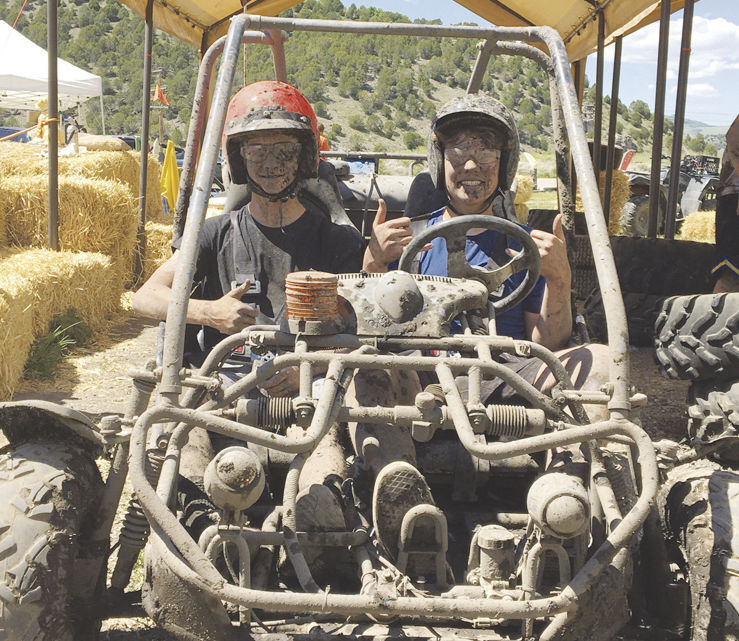 Pocatello teens Gavin Millward, left, and Jack Christensen give a thumbs up after blasting through the mud and dirt on the track recently at Lava Hot Go-Karts near Lava Hot Springs. 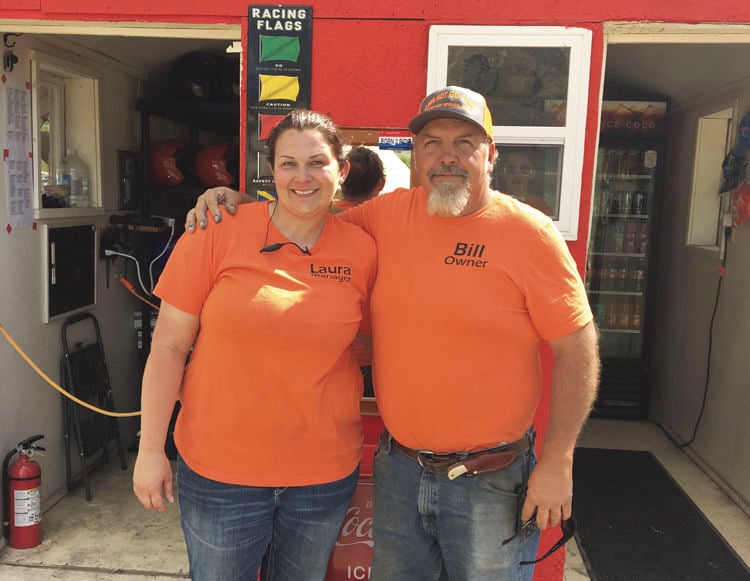 Pocatello teens Gavin Millward, left, and Jack Christensen give a thumbs up after blasting through the mud and dirt on the track recently at Lava Hot Go-Karts near Lava Hot Springs.

LAVA HOT SPRINGS — Anyone looking for a fun time near Lava Hot Springs can find it now thanks to a business there called Lava Hot Go-Karts.

They recently got the most from their trip around the longer of the site’s two tracks, which are about three-quarters of a mile long and just under a quarter mile long.

The wet portion of the track near the concessions area allowed turns that sprayed mud over drivers and those nearby.

So the two teens were covered in it.

And that’s the point, according to track owner Bill East of rural Lava Hot Springs.

It’s a common reaction since the business opened a year ago and drew over 3,000 people during its first season, he said.

“People love getting muddy — they love it,” East said. “If it weren’t for the mud, I don’t think it’d be as busy.”

In fact it was so busy last year that the 58-year-old East was overwhelmed and considered not doing it again this year.

But he got an offer from Laura Bearnson of McCammon to serve as the manager for the business. She wanted to help him offer the experience for area residents again this year.

And that sealed the deal.

“So we’re doing it again this year and we bought more karts,” East said.

And that’s good news for people of all ages who have already visited the track and drove in the karts — including at least one driver who was 80 and who want to go again.

The site will be open seven days a week through August and on the weekends in September.

And that’s a good schedule for the time being.

“I’m not wanting to get too busy yet because we’ve got all these employees I’m trying to train in June,” he said. “Because when July hits, oh my heck, it’s like crazy.”

Just to help run the operation he hired 13 people this year in addition to Bearnson.

“So we have kids anywhere from 14 to 19, plus a couple of my grandkids helping,” East said.

So that frees up East for other tasks, which include ensuring an adequate amount of mud at the turn of the track.

But despite the crush of people when it’s especially busy there’s plenty of room for customers to park their vehicles.

He says they can accommodate anywhere up to 100 people coming to ride the track.

And they recently made it even easier to find the site on Blaser Highway about 1.5 miles from Lava by putting up a large banner to mark the entrance to the track site.

But there are some rules to observe.

The track overall can accommodate kids ages 8 to 16 and there are smaller karts for younger drivers. But they have to wear helmets up to age 17.

Plus all adult participants need to sign a waiver for themselves and their kids, and watch a short safety video.

But East likes to point out that it’s affordable fun.

The hours are from noon to 10 p.m. Friday, Saturday and Sunday and from 3 to 9 p.m. Monday through Thursday.

Meanwhile, in addition to the go-karts, the business also features a hypoallergenic foam pit, which is a large tent that fills with white foam bubbles for kids and others to move around in.

That costs $5 per pit for a minimum of five people and $25 to turn on the foam, East said.

It’s a popular feature just made for photographs.

Plus, East plans more enhancements for the site in the form of automated cameras that will snap photos of people as they drive on the course.

Then they can buy the photos online afterward.

It’s all enough to keep East more than busy and looking for extra hands.

In fact, help from his brother and sister in law — Steve and Erica East — played a huge role in getting the track going last year, along with help from Bill’s wife, Sheron East, he said.

But what prompted the decision in the first place to open a go-kart track for people to enjoy?

“I worked in corrections for 30 years so I’ve seen all the bad and I wanted to see something fun,” East said.

He loves to watch people smiling and being happy.