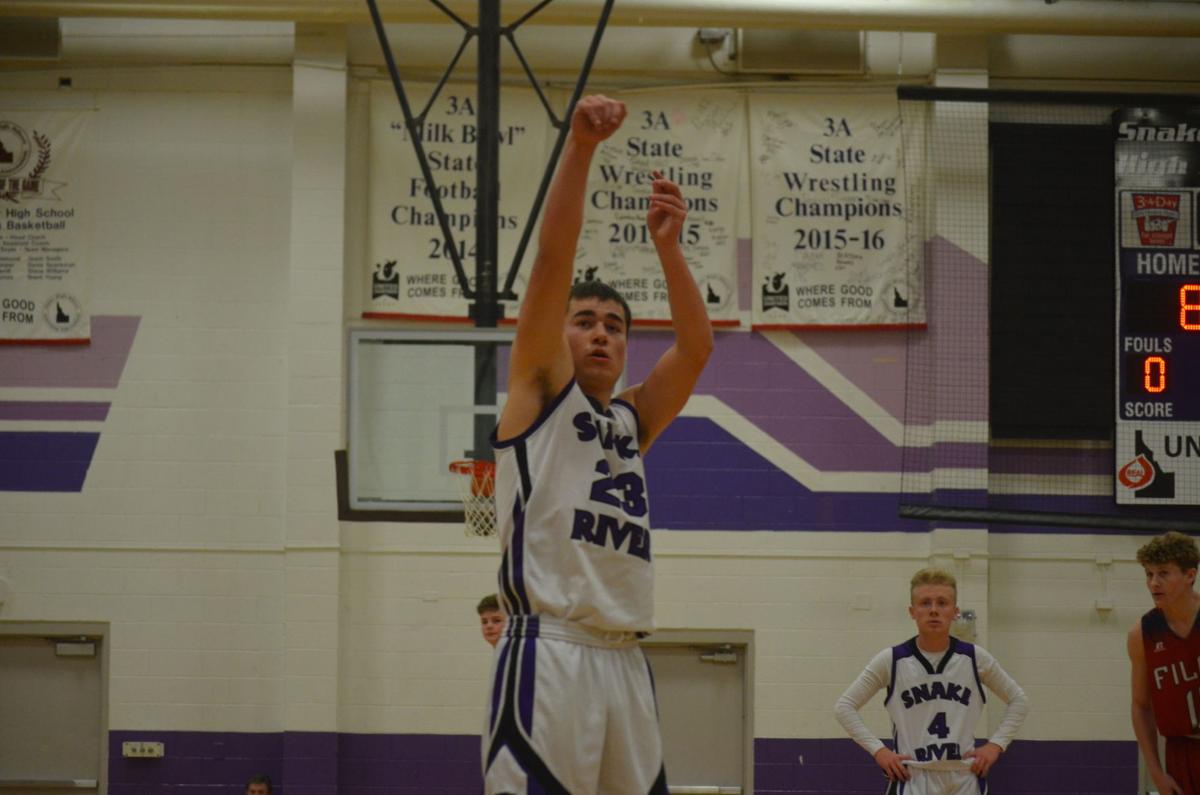 Snake River senior guard Chandler Coombs shoots a free throw during the first half of the Panthers' 57-27 win over Filer on Saturday. 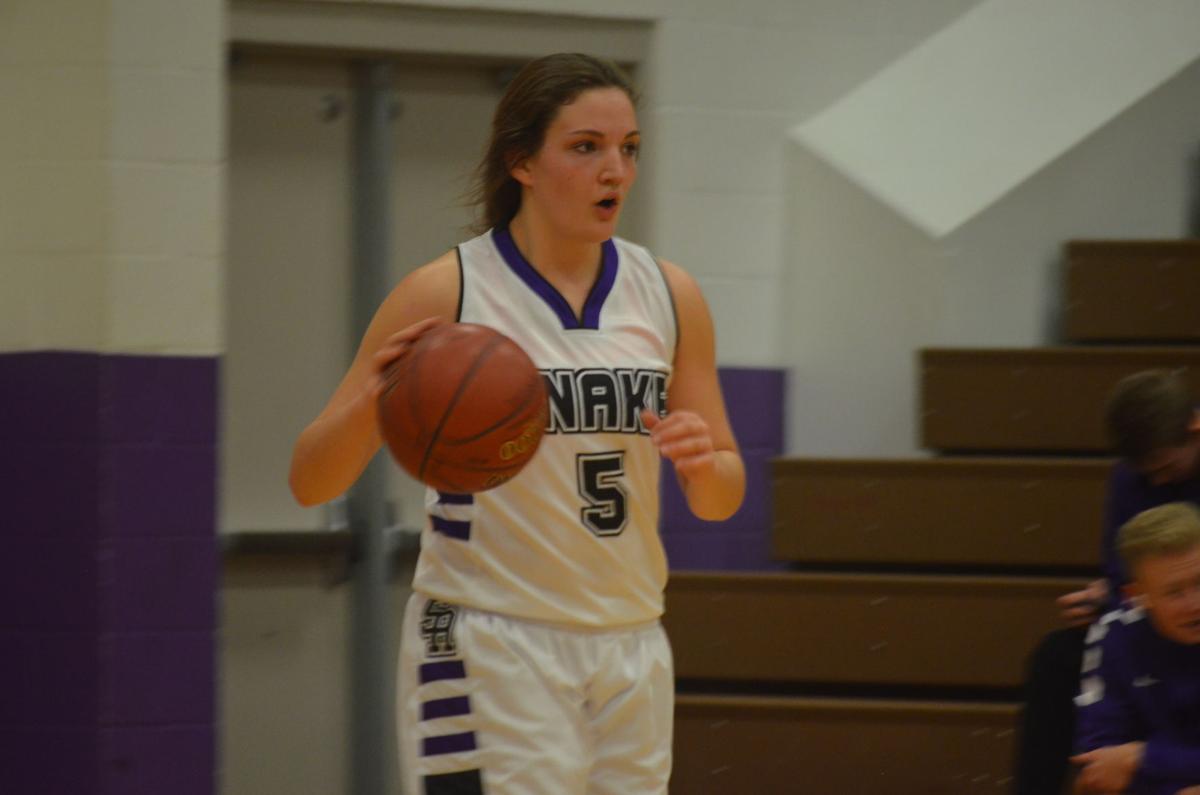 Snake River senior Josee Steadman dribbles up the ball in the second half in what would become a 61-48 victory over Filer on Saturday.

Snake River senior guard Chandler Coombs shoots a free throw during the first half of the Panthers' 57-27 win over Filer on Saturday.

Snake River senior Josee Steadman dribbles up the ball in the second half in what would become a 61-48 victory over Filer on Saturday.

SNAKE RIVER — With glasses hanging from his cream-colored sweater, Snake River coach Robert Coombs crossed his legs and leaned back into the cushioned chairs on the sideline. People at the movie theater sometimes don’t look as comfortable as Coombs did for most of Saturday.

That posture rarely shifted during the Panthers' 57-27 win over Filer, even as he and Filer coach Rob Anderson started yelling their gripes at the refs simultaneously during a break in action, like an aged couple going through a third party to air all their grievances.

“They’re pushing us,” a red-faced Anderson shouted as he stood five feet on the court. “They’re running us into the wall.”

“We’re not running anyone into walls,” Coombs said, unfazed.

Anderson had an argument. Filer (2-6) had 23 fouls compared to just a half-dozen that were whistled against Snake River, many of which were coming near the basket when bodies collided during layups and rebounds.

On one play, freshman guard Luke Higginson went up for a left-handed layup and was met by a trio of airborne Wildcats, who slapped Higginson’s arm and knocked him to the ground. A foul was quickly whistled.

"I thought there was a lot of pushing and shoving. That's not basketball," Coombs said. "If they're not going to call it, the kids are just going to beat the crap out of each other. And that's exactly what happened."

Earlier in the game, irked that more fouls weren't being called against the Wildcats, Coombs berated the refs for about two minutes, a few noticeable and loud moments out of his zen posture. A few comments turned to chirps then, early in the second half, he let the referees have it.

Snake River was up a dozen at that point.

A few seconds later, a referee ran down the court and chuckled as he said to a parent, “He needs to be a lawyer.”

On Saturday, his team made the argument easier. Chandler Coombs and Mitch Lindsay both scored a dozen as the Panthers turned Filer's offense into a stagnant, hesitant group.

Long Wildcat possessions often turned into fast break points for Snake River, and when the Panthers had to set something up in the half court, someone beyond the arc often came open.

"We always say, 'Open, in range, on balance.' That's our philosophy in game situations," Coombs said. "When they meet that criteria, they have the green light.

"I'm really happy where we're at, but we still have to get better."

SNAKE RIVER — One of the dozen parents sprinkled throughout Snake River’s gym hollered when just the rise of an octave would have carried to the court.

Freshman point guard Rylie Edlefsen stared up at a clock that read 5.4 seconds. She caught the inbounds pass and weaved up the court, trying to set up a solid look before the end of the half. Thing is, Josee Steadman doesn’t need solid looks. With a defender in her face 25 feet from the basket, Steadman caught Edlefsen’s dish and fired a rainbow.

“That’s kind of what we wanted,” Snake River coach Jeff Steadman said. “Over the last couple years, that’s happened more often than not.”

Snake River’s 11-point halftime lead was enough in the Panthers 61-48 victory over Filer (6-6) on Saturday.

“I think we got our feet under us and finished the game pretty good,” Jeff Steadman said.

Josee Steadman racked up a game-high 20 points while showing the ability to score in every fashion imaginable. And that’s really what makes her — and Snake River, as a whole — so tough to guard. Their versatility is too tough for opponents to match.

The Panthers have three girls standing at 6-feet tall — Josee Steadman, Jackie Steadman and Adia Goff, who scored 16 on Saturday. All three are proficient ball-handlers, able to run an offense and pass confidently from the backcourt.

When the advantage really shows is after they battle down low, grab a board and ignite the fast break on their own. On one play in the second half, Goff corralled a rebound near the left block and started sprinting. She got to about half court before she chucked a pass ahead for an easy layup.

For Snake River, the mismatches are endless.