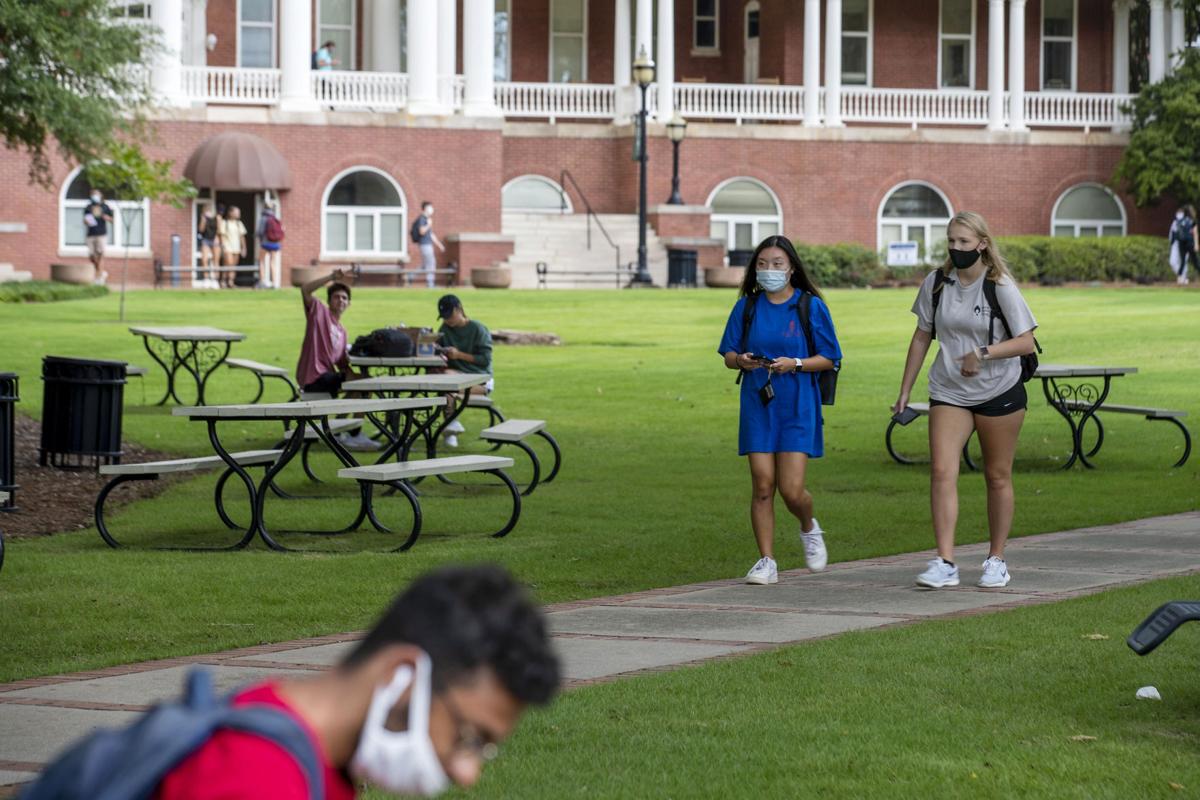 Georgia College and State University freshmen Ashlynn Anglin, right, and Meghan Murphy, second from right, wear face masks as they walk through the campus in Milledgeville, Georgia, on Aug. 21. As more and more schools and businesses around the country get the OK to reopen, some college towns are moving in the opposite direction because of too much partying, leading to COVID-19 outbreaks among students.

Georgia College and State University freshmen Ashlynn Anglin, right, and Meghan Murphy, second from right, wear face masks as they walk through the campus in Milledgeville, Georgia, on Aug. 21. As more and more schools and businesses around the country get the OK to reopen, some college towns are moving in the opposite direction because of too much partying, leading to COVID-19 outbreaks among students.

”The original sin was inviting the students back to campus.”

”What we didn’t model for is that people would choose to go to a party if they knew that they were positive.”

By one set of measures, the U.S. ranks 131st in the world in controlling the coronavirus. Researchers at endcoronavirus.org rank countries in three categories: those that have “beat the virus” (30, including New Zealand, Taiwan and Thailand); those that are “nearly there” (18, China, Australia and South Korea); and those that “need action,” where the U.S., Brazil, Sweden, and Israel join 81 other nations.

When Israel opened its schools in late May, they experienced a huge virus outbreak, which, as one news source reported, “forced hundreds of schools to close, and tens of thousands of students and teachers were quarantined.” Responding to 4,000 daily new coronavirus infections, Israel is now facing a second 14-day lockdown.

US virus cases up 17 percent; deaths up 5 percent

“Out of control” most aptly describes government mismanagement in the U.S., Brazil and India. A Donald Trump-inspired premature opening of American businesses and schools, primarily in the South, led to record number of cases and deaths in July. Memorial Day celebrations may have been a primary driver.

Trump’s fatuous claim that “we have turned the corner,” belies a Labor Day spike and the opening of schools, colleges and universities. Virus cases are up 17 percent two weeks after a holiday and deaths have increased 5 percent.

Many campus residences in quarantine

According to a recent analysis, Wisconsin is the only blue state among 11 red states that have the most cases per capita, and that is most likely because the University of Wisconsin-Madison has 1,100 cases and has suspended in-person instruction. Two dorms are now in quarantine, and the county commissioners are considering sending all dorm residents home.

Other authorities, including the White House’s Debra Birx, are warning that sending students home without testing them will only further spread the virus. At the University of Illinois, the administration has locked down its dormitories and allows students out only for classes and medical emergencies.

Faced with a tripling of cases, the University of Tennessee, Knoxville has run out of quarantine space and has told some uninfected students to move out of their dorms. At the University of Arizona, all students on campus and within a specified perimeter are being told to shelter in place for 14 days.

‘Beyond our wildest nightmares’

Other universities that have mandated a two-week quarantine include University of Colorado, North Carolina State, Michigan State, Notre Dame and Duke University. Gavin Yamey, a Duke professor of Global Health, exclaims: “It has been beyond our wildest nightmares. It has been a debacle and a national catastrophe. It was a self-inflicted national wound.”

An incomplete survey of 1,600 campuses done by the New York Times has identified more than 88,000 cases on 1,200 campuses with 64 deaths. Researchers from three institutions have done a more comprehensive study using cellphone and GPS data. They estimate that 3,200 extra cases per day appeared in college towns from mid-July to mid-September. This was the same method that produced the 267,000-death estimate for new cases stemming from the Sturgis Motorcycle Rally in South Dakota.

About 40 percent of college and university campuses were set to open for in-person classes, but only 25 percent have met that goal and the rest have gone to on-line teaching. Nine of 15 major public universities have switched to virtual instruction.

Tim White, former University of Idaho president and now chancellor of the 23-campus California State University (the largest in the nation), has moved his 484,300 students online.

Pittsburgh Regional Health released a survey of public health experts on how colleges should respond to virus outbreaks. One of the report’s conclusions was: “Close fraternity houses. Period.”

Officials at Indiana University-Bloomington requested that all Greek houses close for the semester, but negotiations led to suspending 40 and locking down the rest. After a party at the Acacia Fraternity house, 88 percent of its members tested positive. Purdue University has quarantined 23 fraternities, sororities and other student housing, and Boise State University has suspended three fraternities and 18 students for violating virus regulations.

Some administrators are the problem

The administration at the University of Alabama-Tuscaloosa warned faculty not to discuss the pandemic or have students report positive cases to them. University of Missouri president Mun Choi had blocked his Twitter account after receiving complaints about his COVID policies, but the backlash was so great that he unblocked it. A journalist was not able to identify whom bystanders said was a college president lining up unmasked for selfies at a Maryland bar.

UI said that it would update its athletic case numbers by Aug. 31, but it has yet to do so. (During the month of July, 9 had tested positive and two staff as well.) ESPN surveyed 65 athletic powerhouses and one-third did not provide coronavirus protocols nor did they release case numbers. This information is imperative because 15 percent of college athletes have been diagnosed with myocarditis, which is an inflammation of the heart muscle that can be fatal.

In August, Jamain Stephens, a promising football recruit at California University of Pennsylvania, came down with the virus and then suddenly died of a blood clot. Neither Stephens nor his team members were tested for the virus, no temperatures were taken, and there was no contact tracing.

Ed Orgeron, Louisiana State’s football coach, reported that “most of his players had contracted the virus.” After 27 tested positive, every athlete at Miami University in Ohio will have to isolate for two weeks. All athletic activity at the University of Maryland, College Park was halted after positive results rose sharply.

A local columnist in Moscow-Pullman tried to reassure his readers that, as there have been no local hospitalizations or deaths, we should not be worried. Since he wrote, there have been three virus admissions at Whitman County hospitals.

Dr. Natalie Lambert has conducted a COVID-19 “Long Hauler” survey, and she has found 98 long-lasting conditions due to the virus, many in young people. They people are experiencing cognitive dysfunction or memory loss; some have lung pain, hypoxia or profound fatigue; others have had strokes, blood clots, numbness, increased heart rate or cardiac dysfunction.

Over 500,000 children have now tested positive for the virus, and doctors say that some of them may suffer from post-COVID illnesses for the rest of their lives. They will, of course, need treatment much longer than older patients.

One doctor warned that “if someone in their teens and 20s suffers a stroke or embolism, it could impact their long-term life choices in profound ways.” CNN anchor and virus survivor Richard Quest has warned that “COVID is a tornado with a very long tail.”

Virus increases at UI and WSU

The first round of testing at UI found 34 cases, but after a Labor Day spike, the total is now 126 — 41 percent of the cases in Latah County. Washington State University now has over 900 cases, and Pullman made national headlines for college towns that have the highest per capita numbers. The total case numbers in Whitman County is currently 1,180.

From Sept. 6 to 12, the percentage of those who tested positive in Whitman County was an alarming 19 percent. UI positivity rate has now climbed to 4.7 percent, just under the 5 percent that the CDC recommends for safe activities.

Following national trends, the largest group of new infections for Whitman and Latah counties is people from 18 to 29 years old. The most recent reports from Latah County were all under 30 (except one in the 50s) and, sadly, two children under 4.

ISU has reported 80 cases, which is 8 percent of Bannock County’s 995. (No positivity rate was available.) With about double the number of students, Boise State University has 167 cases with an excellent 1.14 percent positivity rate. This shows that there has been enough testing to validate good progress on controlling the virus.

BSU-AFT President Tedd MacDonald emailed me that currently about half of the institution’s classes are now taught online, but the UI administration has not been so flexible. UI-AFT President Dale Graden reported that about 150 faculty have asked to teach online only, but their requests were declined.

BSU’s MacDonald was pleased that the administration was so inclusive in consulting faculty and staff. My research shows that this has generally been the case across the nation. One headline asked: “Will COVID Bring Power Back to the Faculty?”

The United University Professionals (AFT), the largest faculty union in the nation, represents faculty and professional staff at the 29-campus State University of New York. The union has just reached an agreement with its administration on a comprehensive virus testing program. The AFT’s detailed “Plan to Safely Reopen Schools and Communities” is being used in school districts nationwide. If the Trump administration had controlled the virus as other countries have, then our students, our workers and our economy would be in far better shape.