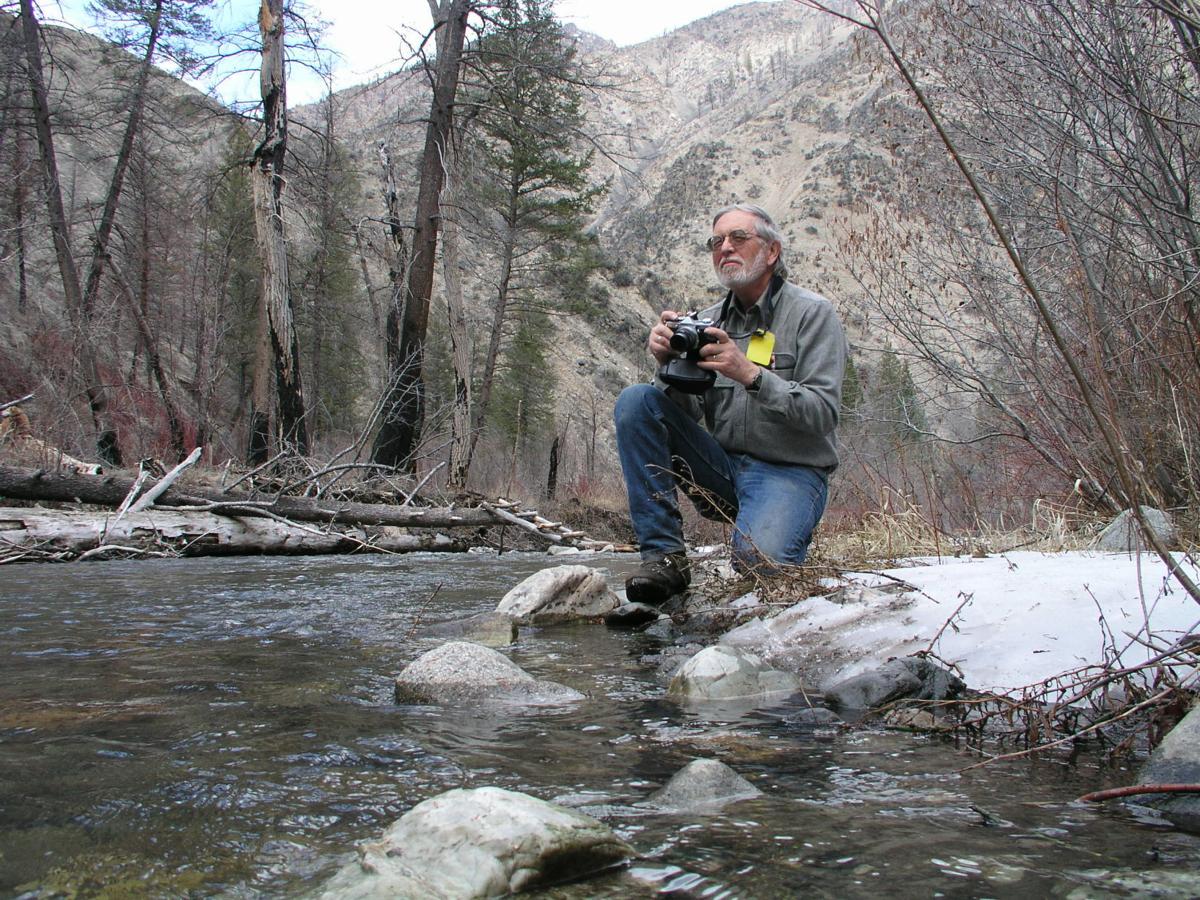 Wayne Minshall photographs the Big Creek drainage, which is a tributary of the Middle Fork Salmon River in the Frank Church River of No Return Wilderness where he and his students conducted decades of ecological research. The renowned stream ecologist died on Tuesday at 81 years old. 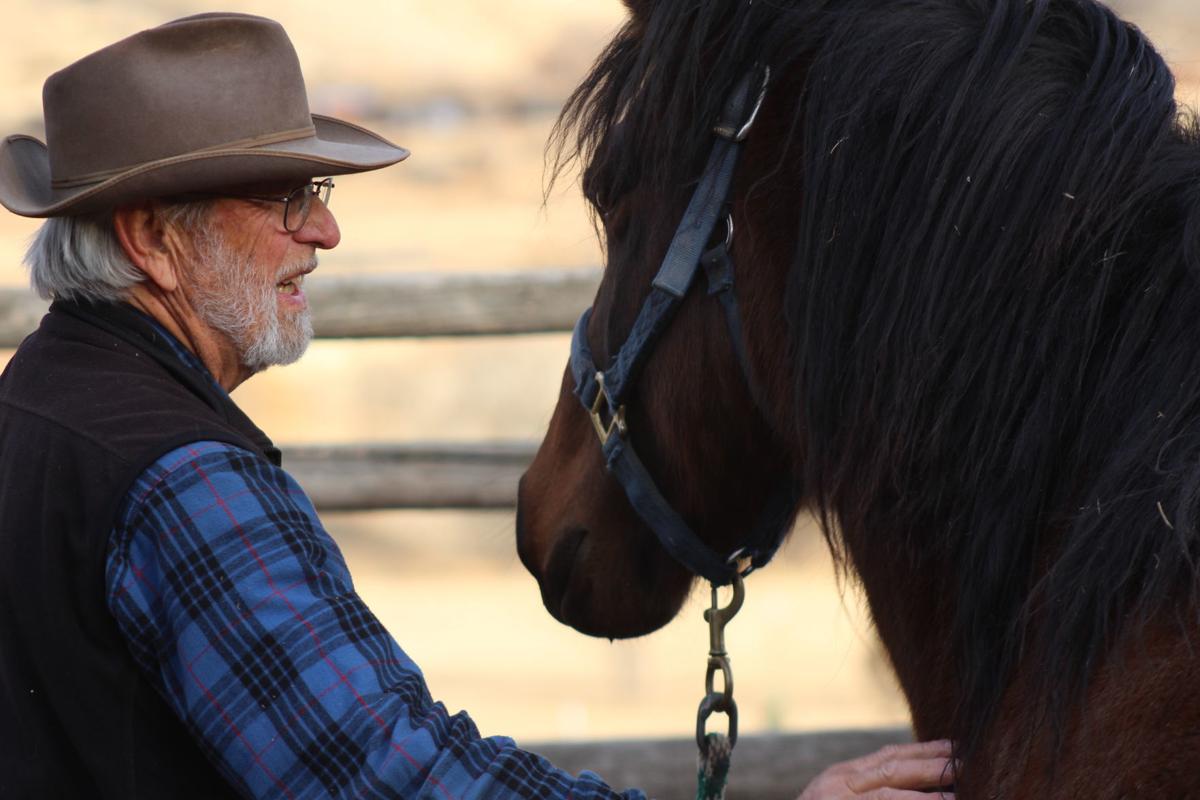 Wayne Minshall is pictured in November 2018 with a wild horse he adopted named Rascal. 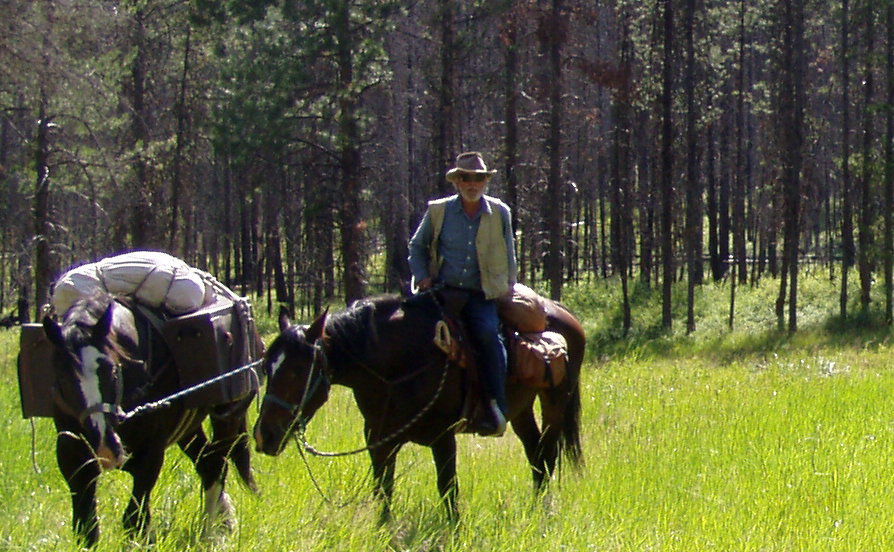 Wayne Minshall rides into the backcountry on horseback.

Wayne Minshall photographs the Big Creek drainage, which is a tributary of the Middle Fork Salmon River in the Frank Church River of No Return Wilderness where he and his students conducted decades of ecological research. The renowned stream ecologist died on Tuesday at 81 years old.

Wayne Minshall is pictured in November 2018 with a wild horse he adopted named Rascal.

Wayne Minshall rides into the backcountry on horseback.

Wayne Minshall revolutionized the field of stream ecology during his long career at Idaho State University, and throughout his retirement he continued inspiring students and publishing research.

Minshall, who lived on a hobby farm between Inkom and McCammon with his wife, Judy, died on Tuesday. He was 81 years old.

Minshall was a co-author of an often-cited paper that led stream ecologists to start viewing river systems more holistically, as part of a continuum. He continued to focus on the concept of rivers as a continuum throughout his career, said Colden Baxter, an ecology professor in ISU’s biological sciences department who was hired when Minshall retired in 2004.

Baxter described Minshall as a sage in the field whose work “provided a theoretical framework for organizing our thinking and lines of questioning about rivers.”

"It helped draw people’s attention to the way land and water were connected and how important the land was to feeding, creating and maintaining streams, organisms and ecosystems,” Baxter said of the continuum theory.

Minshall was also celebrated for the many breakthroughs he and his students made through their research on the Yellowstone National Park fires of 1988. That same year, ISU honored Minshall as its distinguished researcher.

"I don’t think there’s any doubt that he’s really the preeminent research scientist to ever come through Idaho State University,” Baxter said, adding that Minshall joined ISU as an assistant professor and worked his entire career at the Pocatello institution.

Baxter explained there had been few studies on the affect of wildfires on river ecosystems before Minshall’s research in Yellowstone. Baxter said most people previously believed natural processes such as wildfire and landslides had catastrophic impacts on native fish, bugs and other aquatic life.

Minshall’s analysis of the Yellowstone fires, however, proved that natural disturbances can actually help maintain habitat and stream health.

Minshall’s son, Jake, fondly remembers the frequent childhood trips he and his siblings would take to scenic places with their parents for the sake of gathering data.

"I recall so many places, especially Yellowstone, where we would drive into them right as they were burning — while all of the other cars were driving in the opposite direction —to get the sample right before or right after the fire,” Jake said.

Jake said the Yellowstone research also confirmed that it can be decades before impacts of wildfires are noticed within larger rivers.

Minshall, nicknamed Doc by his colleagues at ISU, was born in Billings, Montana, and met Judy while working on his Ph.D. in Kentucky. Judy also studied stream ecology and was integral in aiding him in his field work, as well as editing his papers. ISU eventually hired her as a research associate.

She also helped her husband teach an ISU class called practical homesteading, focused on skills needed for living off of the land. They often used their own hobby farm for demonstrations.

At its peak, the small farm had sheep, pigs, chickens, ducks, goats and horses. The family exposed students to skills such as milking goats and making cheese, and some of the neighboring farmers also helped with the class by teaching supplemental lessons.

Their children were active in 4H and were taught to appreciate nature. They were experienced backpackers by first grade, and photographing flowers was a common activity on their wilderness excursions.

The childhood farm, as well as their parents’ lessons about ecology, made a lasting impression. Jake, who resides in California but took an extended visit to Southeast Idaho to help care for his father, still keeps goats and water fowl. His sister Michele raises bison in Wyoming with her husband.

"Scavenging for parts to fix tractors, knowing how to fix a fence — all of those things are legacies of my dad. It’s a self-sufficient type of lifestyle, along with an appreciation for the natural world,” Michele said. “It’s about conservation of resources, not using too much of anything and being appreciative of the resources we have.”

Their sister Jennye, who is in her 40s and has Down Syndrome, is still tasked with caring for the animals on the family’s small farm.

Post retirement, Minshall remained active in research and educating students. In fact, Baxter is finalizing a new research manuscript that will list Minshall as a co-author.

"I have two graduate students who were both going to be drawing on long-term data (Minshall) started collecting in the 1980s,” Baxter said.

Minshall kept an office in Baxter’s lab and came in every week, which Baxter said created a “multigenerational experience for my students.”

"I owe a lot to him,” Baxter said. “He remained a mentor and a collaborator with me in his retirement, which is really remarkable.”

Minshall also joined in on occasional field trips with ISU research teams after his retirement. Judy enjoyed accompanying the groups and took a lead role in packing supplies.

Judy explained her husband designated several locations in remote areas of Yellowstone and the Frank Church Wilderness as “check points.” He’d keep a detailed log of their locations, and he or students would photograph them annually to record the changes in vegetation and sediment.

Minshall’s other great love was for history and story telling. He self published a series of three books on the history of early Idaho history, homesteading and riding horseback throughout central Idaho.

The family plans to host a small graveside burial for Minshall because of the COVID-19 crisis. They’re planning a larger public celebration of his life for when the crisis is over.