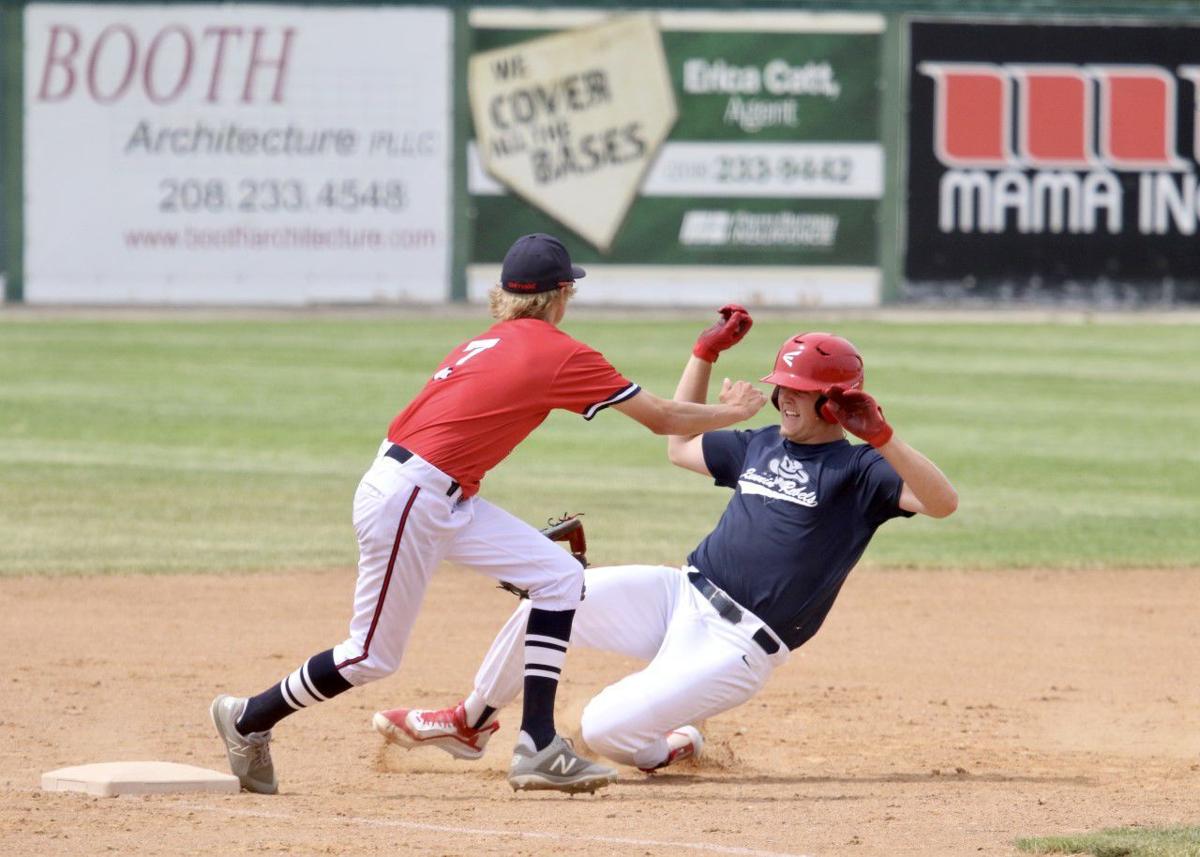 Pocatello Runnin’ Rebels pitcher Trei Hough (in blue) slides into third base ahead of the throw during a game against Cheyenne at Halliwell Park on June 12. 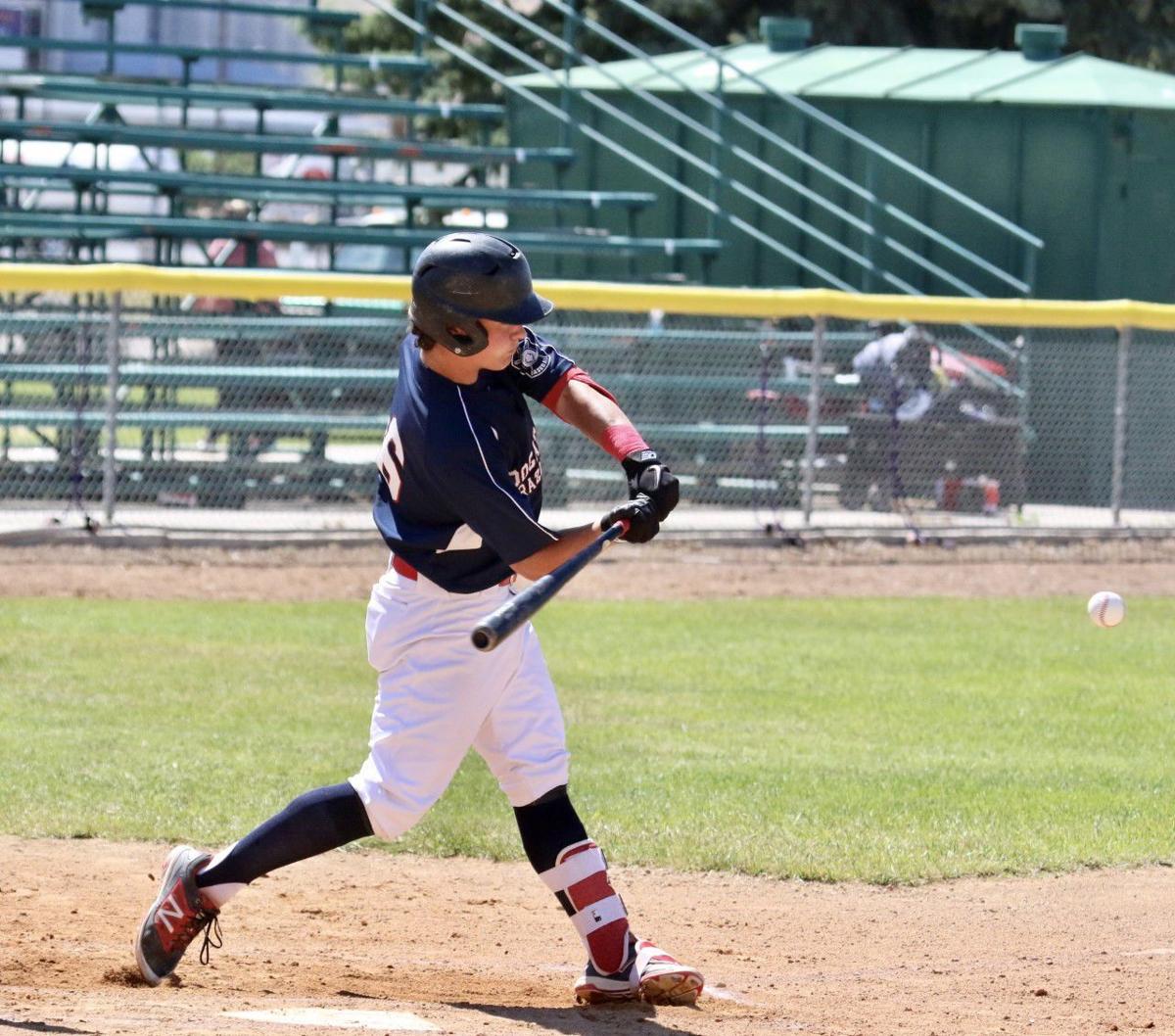 Aaron Kearns of the Pocatello Razorbacks swings at a pitch during a game against Skyline at Halliwell Park on June 18.

Pocatello Runnin’ Rebels pitcher Trei Hough (in blue) slides into third base ahead of the throw during a game against Cheyenne at Halliwell Park on June 12.

Aaron Kearns of the Pocatello Razorbacks swings at a pitch during a game against Skyline at Halliwell Park on June 18.

With a quality regular season, the Pocatello Runnin’ Rebels achieved their goal of a No. 1 seed at the Idaho American Legion baseball state tournament.

Now they just need to live up to it.

In a weird season, the Runnin’ Rebels (33-7) are likely the favorites to take the crown at the eight-team tournament, which starts Monday at Minico.

“We set ourselves up and put ourselves in a good position,” Runnin’ Rebels manager Nick Sorrell said. “That was our goal all year, to be that 1-seed and to be going into the state tournament that way.”

Because of the coronavirus pandemic, only teams from the eastern part of the state are competing, as Treasure Valley teams were never allowed to begin their seasons and teams in the north abandoned theirs after players tested positive.

Not only that, but the Idaho Falls Bandits, reigning national champions, elected not to play. The Bandits beat the Runnin’ Rebels in three of four matchups this year.

All of Pocatello’s other losses were to out-of state teams.

As befitting their record, the Runnin’ Rebels are deep, experienced and talented.

Infielders Payton Cleaves, Trei Hough and Seth Nate, outfielder Dalton Jones and catcher Dylan Jester are an experienced core that have been cemented at the top of the Runnin’ Rebels lineup all season, while Jaxon Christensen and Kyler Knowles have broken out recently.

”Jaxon Christensen, who usually hits in our No. 6 spot, has been really, really consistent for us driving in runs,” Sorrell said. “Kyler Knowles has also been one of those guys that, if he gets up with runners in scoring position, more often than not he’s going to come through as well. ... You look at 1 through 9, the guys that we roll out there, they can all swing it.”

In a short tournament, pitching depth is also important, and the Runnin’ Rebels have that with Jones, Hough and Nate, as well as others like Christensen, Riley Peck and Caden McCurdy.

”Our pitching staff is set up so that we’re deep, we can put a lot of pressure on teams because we are so deep pitching, and that’s one of the big advantages that we have,” Sorrell said. “When you go into a tournament and you have seven or eight pretty good starting pitchers, you can kind of maneuver things and fit the pitch (count) rules.”

Pocatello starts tournament play against South Fremont, the No. 4 seed from the East region, Monday at 7 p.m.

The other local team in the Double-A bracket is the Blackfoot Broncos, who finished 16-9 to clinch the No. 3 seed out of the West.

Manager Zachary Reay said Blackfoot “hit the ground running” to start off the year, but the Broncos have been better recently, with a six-game winning streak in mid-July the team’s longest of the season.

”I’m feeling confident,” Reay said. “I feel as though the boys are playing good baseball right at the right time. Like I’ve told the boys all year, as long as we take care of the baseball on defense and have quality (at bats), I think we’ll do just fine.”

Blackfoot starts the tournament Monday against the Idaho Falls Tigers at 1 p.m.

It could be a battle royale between three local teams at Halliwell Park to decide the Single-A state championship this year, as Marsh Valley, Malad and the Pocatello Razorbacks all have eyes on the prize.

”That’s three of the best teams in the state,” Razorbacks manager Duane Rawlings said a few weeks when the trio were battling it out for seeding purposes, and nothing that’s happened since then has changed that assessment.

Marsh Valley took the No. 1 seed in the Central region, with Malad No. 2 and the Razorbacks No. 3, but all three teams are powerhouses.

Pocatello, the worst of the trio by seeding, still finished 32-7, with three of those seven losses coming against either Marsh Valley or Malad.

The trio brings a lot of talent to the field as well.

The Razorbacks, typically made up of younger players still coming up at the city schools, don’t have any holdovers from the All-Area team, but don’t lack for talent.

Scott Baker, Jett Anderson and Luke Davis have hit at the top of the lineup all year for Pocatello, while McCadden Evans and Brody Burch lead a deep pitching staff.

”I think we’re positioned really well, because we’re deep at pitcher,” Rawlings said. “We got a lot of guys innings throughout the year, so we’re poised to make a good run if we need to. ... I’m excited, and I think we’re in a good spot.”

All three teams play Monday at Halliwell Park, with Pocatello opening the day at 9:30 a.m. against Shelley, Malad playing Buhl at 4:30 p.m., and Marsh Valley wrapping things up against the Idaho Falls Tigers at 7:30 p.m.