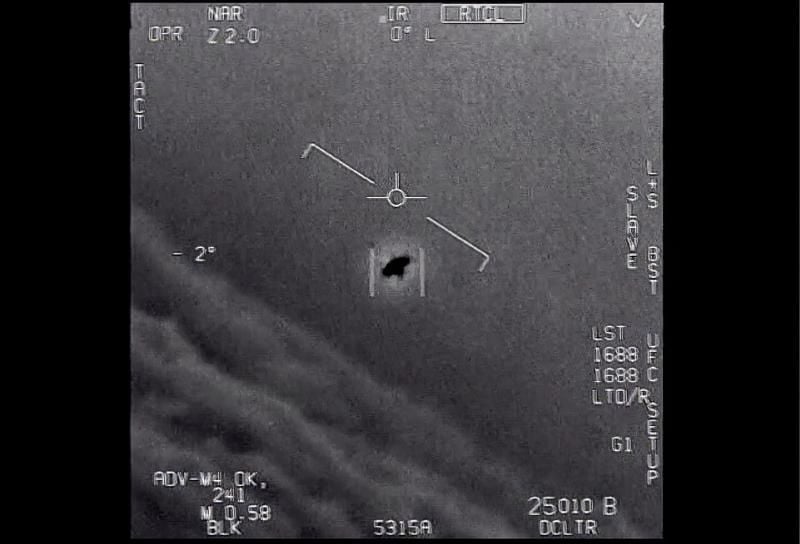 The image from video provided by the Department of Defense labeled Gimbal, from 2015, an unexplained object is seen at center as it is tracked as it soars high along the clouds, traveling against the wind. “There’s a whole fleet of them,” one naval aviator tells another, though only one indistinct object is shown. “It’s rotating.” The U.S. government has been taking a hard look at unidentified flying objects, under orders from Congress, and a report summarizing what officials know is expected to come out in June 2021. 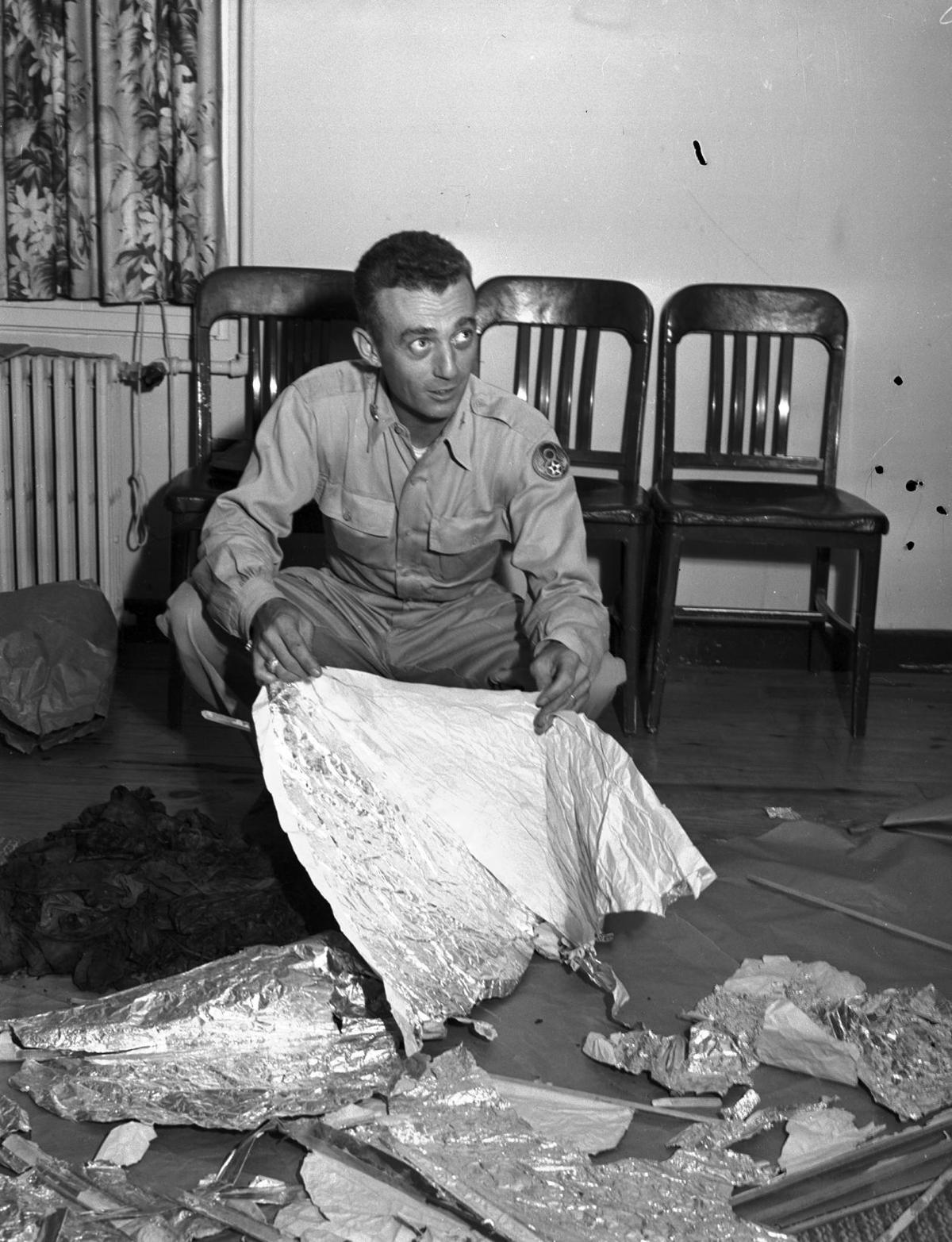 The Pentagon admitted that the military has observed flying objects that cannot be identified with its release of a preliminary report on the subject.

Some UFO researchers in Idaho — a state that has been a part of UFO history since they first began being sighted in the 1940s — feel there is more to come.

Forty three percent of Americans are more interested in UFOs than they were before as a result of the buildup in advance of the UFO report, Newsweek reported.

The Office of the Director of National Intelligence released the congressionally mandated unclassified report about unidentified aerial phenomena, commonly referred to as UFOs, on June 25.

The Pentagon had a secret program that studied UFOs during the early 2000s, which was not revealed until 2017, The New York Times reported. Since 2017, several military videos of UFOs have emerged, which the Pentagon verified. As a result, public interest has grown about the topic of UFOs and how much the government may know.

The report exists thanks to the Senate Intelligence Committee, which added a provision to one of President Donald Trump’s COVID-19 relief packages that directed ODNI to release the report after the growing public interest in UFOs during the last few years, The Washington Post reported.

The nine-page report titled “Preliminary Assessment: Unidentified Aerial Phenomena” did not mention extraterrestrials, but it did not rule out that some UFOs could possibly be caused by extraterrestrials.

In addition to stating that ODNI believes UFOs are real a phenomenon, the report said that ODNI believes more research may be able to identify the cause of UFO incidents as one of five different categories: “airborne clutter,” “natural atmospheric phenomena,” secret United States technology, secret foreign technology or, lastly, a category simply called “other.”

The question on many people’s minds is whether some UFOs could truly be in the “other” category and what exactly that means.

Fifty one percent of people in the U.S. say “that UFOs reported by people in the military are likely evidence of intelligent life outside Earth,” according to the results of a Pew Research Center survey, which was conducted just days before the UFO report was released.

Idaho has had many UFO sightings

Idahoans report sightings of UFOs so often that Idaho ranked No. 1 per capita for UFO sightings reported to the National UFO Reporting Center for at least the first three months of 2020, the Idaho State Journal reported in June 2020.

NUFORC was founded in 1974, according to information on NUFORC.org, and is recognized by at least one U.S. federal agency.

Idaho also has a connection to one of the most famous UFO sightings of the 1900s. The words “flying saucer” entered the American conversation when several newspapers reported the sensational 1947 UFO sighting by a Boise-area pilot named Kenneth Arnold who was flying his small plane in Washington state when he saw nine “saucer-like” UFOs flying in “formation,” according to an AP News article from 2017.

A wave of UFO sightings occurred during the summer of 1947; Arnold’s report was not the first, but it was the first to receive a lot of attention from newspapers, according to the book “Report on the UFO Wave of 1947” by UFO researcher Ted Bloecher.

“As most people familiar with the history of the UFO phenomenon are aware, the events of 1947 seemed to begin on June 24th, the date of the sighting made by Kenneth Arnold,” “Report on the UFO Wave of 1947” stated.

Arnold’s UFO sighting happened less than a month before the events that made Roswell, New Mexico, famous when rumors spread that the U.S. military had recovered a crashed UFO from a nearby ranch.

Because of the buzz about “flying saucers” that started with Arnold, many newspapers excitedly reported the story when the U.S. Army said it was in possession of a “flying disc.”

The Roswell Army Air Field released a statement on July 8, 1947, that said, “The many rumors regarding the flying disc became a reality yesterday when the intelligence office of the 509th Bomb group of the Eighth Air Force, Roswell Army Air Field, was fortunate enough to gain possession of a disc through the cooperation of one of the local ranchers and the sheriff’s office of Chaves County,” according to an article in the July 8, 1947, edition of The Sacramento Bee.

The next day, a brigadier general told the Roswell Daily Record that the wreckage was from a balloon. The military no longer spoke of “flying discs.” The military still maintains that the wreckage was from some type of balloon, according to “The Roswell Report: Fact versus Fiction in the New Mexico Desert,” which the U.S. Air Force published in 1995.

“The July 9 edition of the paper noted that Brigadier General Roger Ramey, Commander of the Eighth Air Force at Fort Worth, Texas, stated that upon examination the debris recovered by Marcel was determined to be a weather balloon,” “The Roswell Report” stated.

Since that time, many people still believe that the U.S. government collected wreckage from a crashed UFO.

Although polling information about the Roswell incident is hard to find, a CNN poll of 1,024 U.S. adults from 1997 found that “nearly two-thirds of the respondents to the poll said they believed that a UFO crash-landed in a field outside the New Mexico town,” according to a CNN article from 1997.

“My initial reaction to the report was no surprise,” said Jim Millard, MUFON state director for Idaho. “I expected the content that was in there. I was a little disappointed, though, that the United States government spent six months researching this subject and came up with a whole nine pages. That in itself tells me that they’re not very serious about it.”

Millard said he does not believe UFOs are a threat to “planetary security.”

Millard also said that he doesn’t think that the authors of the report know more than they are revealing.

Millard went on to give the opinion of MUFON.

“MUFON believes that the UFOs are real, they have been here for a very long time and they’re apparently no threat to us,” he said. “Other than a possible threat to aviation safety, since some of them have gotten a little uncomfortably close, shall we say, to aircraft. Other than that, they don’t appear to be interested in anything more than just observing us.”

Millard said he is retired and has had several jobs in the IT industry.

He said he has a military background and was a “crypto technician” for the Air Force and served for eight years with six months in Vietnam and retired as a staff sergeant. He lives in Caldwell.

Millard became interested in UFOs because of his personal experiences with them.

“I saw one when I was 5 years old. Everyone tried to tell me that it was a balloon or something. But, no, it didn’t look like a balloon,” Millard said. “Granted, I was only 5 years old, but this thing was just slowly moving through the sky, and it was definitely not a balloon. There wasn’t anything hanging from it, it didn’t have the shape of a balloon or anything else. It was just a saucer.”

He said he has seen other things he could not identify since then.

As a result, Millard was interested in UFOs his whole life and then eventually took the course to become a MUFON field investigator about six years ago and became the state director three or four years ago after the rest of the investigators quit, Millard said.

“So far, I’m still the only investigator in Idaho. So if anyone reads your article, who lives in Idaho and is interested in UFOs, please consider becoming a field investigator,” Millard said. “I could use some help. It’s not that difficult. We only get about four or five a month.”

To volunteer to be a MUFON investigator, sign up at mufon.com/volunteer.

Since 2016, Kelly Klaas has been an administrator for the Facebook group “MUFON of Southern Idaho,” which held in person meetings in Twin Falls before the pandemic, according to information from the group.

Klass said he believes that the U.S. government intentionally revealed very little about UFOs in the report.

“Well, I was never really that excited about (the report) when they announced it because I knew that … the government is never going to show any of their cards. They’re just not going to do that,” Klaas said. “I didn’t expect anything and even after reading the report several times, all I have gotten is that they tell us, ‘Yeah, something’s there, we still don’t know what it is.’ … I would like to see the report that they gave to Congress, but I doubt that it’s even much more enlightening than the one they gave the general public.”

Klaas described himself as a “UFO enthusiast” and said that UFOs are just a hobby for him. He became interested in UFOs as a kid and read library books about them and later saw a UFO in the late 1990s, Klaas said.

Klaas has not attended the MUFON of Southern Idaho meetings regularly but created the Facebook group after attending a meeting once and being asked to help create the group and has acted as the group administrator ever since, Klaas said.

Klaas lives outside of Twin Falls and is retired and used to work in the radio industry on air and as the chief engineer for a group of stations, he said.

Although Klaas did not feel the report said much, he thinks it may have the result of making more people, including some scientists, more interested in UFOs.

“I think if anything, it may make the scientific community take (UFOs) a little more seriously,” Klaas said.

Ruth Pierce is another administrator for the “MUFON of Southern Idaho” Facebook page.

“There was sure a lot of hype building up toward (the report). So I’ve kind of followed the UFO community for a long, long time. … I’ve seen the bantering about what (people in the UFO community) were expecting and it seems kind of like a let down,” Pierce said. “It could have been better.”

Pierce described her interest in UFOs as a “side hobby” and said she has never seen a UFO herself. She is a practicing certified public accountant.

The Idaho State Journal reached out to other individuals and UFO groups in Idaho to request an interview for this article but did not receive a response.

Whether or not the whole truth was in the ODNI UFO report, investigators like Millard and hobbyists like Klaas and Pierce will continue seeking information for themselves.