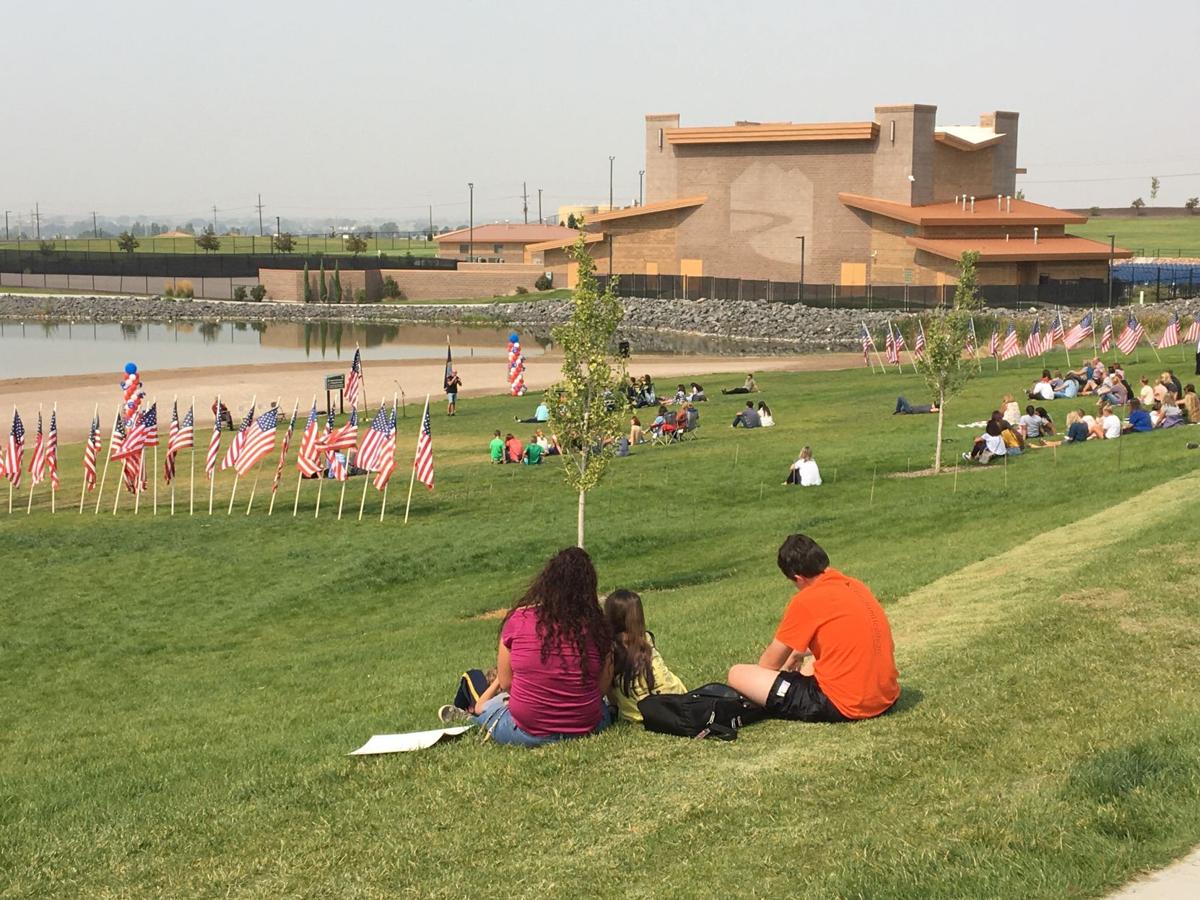 This was the scene on Wednesday at the Portneuf Wellness Complex in Pocatello during a rally to return to five-day-a-week in-person instruction for upper grades in School District 25. 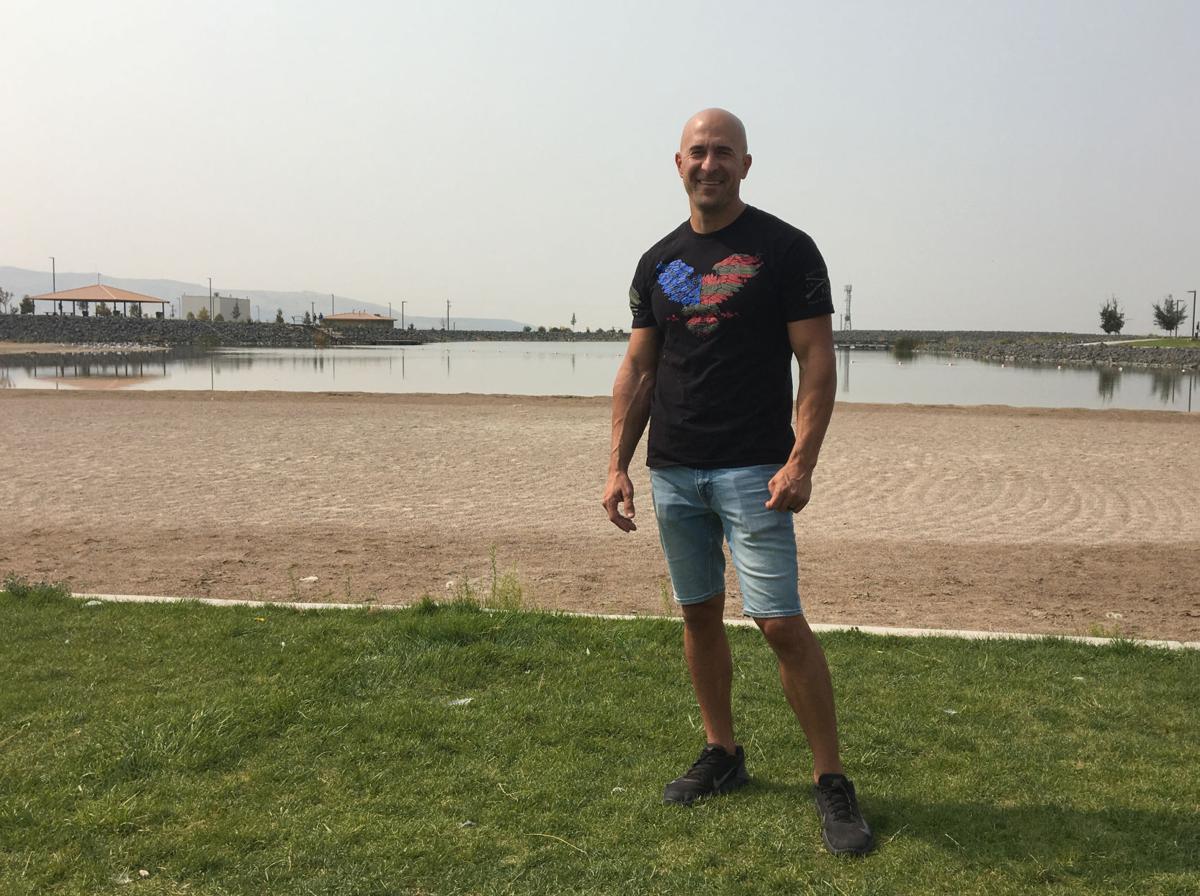 Eric Moutsos stands at the Portneuf Wellness Complex in Pocatello on Wednesday where he gave a speech during a rally to resume in-person five-day-a-week instruction for upper grades in School District 25.

This was the scene on Wednesday at the Portneuf Wellness Complex in Pocatello during a rally to return to five-day-a-week in-person instruction for upper grades in School District 25.

Eric Moutsos stands at the Portneuf Wellness Complex in Pocatello on Wednesday where he gave a speech during a rally to resume in-person five-day-a-week instruction for upper grades in School District 25.

POCATELLO — Well over 150 people attended a rally on Wednesday at the Portneuf Wellness Complex in Pocatello to promote local schools returning to in-person instruction five days a week for upper grades.

Melissa and Jonny Fisher of Chubbuck chose to organize the event ahead of School District 25’s coming school board vote on Friday on whether to return to five day in-person instruction. That would be instead of the current upper grades hybrid of three days of remote learning and two days of in-person instruction.

“We kind of thought, well ahead of the next vote, let’s kind of have a coming together of people of like minds,” Melissa Fisher said about the rally.

She said it was challenging to pull the event together, including bringing in a speaker from St. George, Utah, on short notice.

Melissa added, “I thought it was a real inspiring event.”

She says she bumped into District 25 Superintendent Doug Howell earlier in the day on his way to Chubbuck schools during a tour for Idaho Gov. Brad Little.

Howell couldn’t get to the rally.

She said Wednesday was a good day to hold the rally since District 25 students weren’t busy with school work.

“We knew that the students were out of school,” she said.

She says there’s no learning happening on Wednesday. And there are no added Zoom calls or extra things going on that day, she said.

“So we thought come on out, parents bring your kids that we know are sitting home,” she said. “You know, two days before the vote.”

But Courtney Fisher, who handles communications and community relations for the school district, said that Wednesday is a remote learning day for all grades in 6-12 and an in-person day for elementary learners in grades K-5. So most school district staff and learners would have been engaged in their educational responsibilities during the time frame for the rally.

Melissa and Jonny Fisher, who have a daughter in ninth grade at Highland High School, said they just realized that nothing’s going to change and that students are at low risk from the pandemic. So in-person instruction is the better option.

“And we just want the opportunity to make that choice and they’re not giving us the choice,” Melissa said.

Meanwhile, students who need to stay home can stay home and use online instruction.

“And let those that want to go back to the full five days go back to five full days,” Melissa said.

But Courtney Fisher says that in the few short weeks the school system has been back in session the teachers have made a commendable effort to maintain rigorous instruction for all District 25 learners. And that’s whether they attend face-to-face or remotely.

“We respect that families want what they deem best for their own children and we weigh that feedback with several other factors involved in making these tough decisions,” Courtney Fisher said.

Meanwhile, Melissa was pleased that former Salt Lake City policeman, motivational speaker and entrepreneur Eric Moutsos, 39, could serve as headline speaker at the rally. He created a group called the Utah Business Revival on Facebook that currently has 25,000 members, he said.

“I saw him put together some rallies in Utah and I was inspired by him standing up and saying you know the government works for us, we don’t work for them and we want our voices heard,” Melissa said. “And I just loved his message and I think he’s a really awesome positive guy in the rally arena, and thought he’d be a great one to come speak.”

And Moutsos was willing to appear.

Moutsos says members of the Utah Business Revival have been going around Utah and doing business events in protest form. They also have speakers and performers. For instance, they had country singer Collin Raye perform before 5,500 people.

And they had Tim Ballard of Operation Underground Railroad, which saves trafficked children, speak at one of the group’s events before over 6,000 people.

“So we’ve been trying to promote freedom and liberty while still staying as safe as we can,” Moutsos said.

But he notes that people have rights.

“I understand that those rights upset some people,” he said. “Because if we choose not to wear a mask they think that it’s somehow infringing on them. But what they don’t realize is that it’s infringing on us when we don’t want to wear it.”

Especially given the current pandemic numbers in the area, he said.

“And so I respect those who want to wear a mask. OK. Respect me for not,” he said.

Moutsos says that what he’s seen in Idaho is just gross government overreach and the state doesn’t don’t know its role.

Moutsos says there should never have been a forced lockdown. That exceeds the state’s authority.

“They can say, ‘Hey, it’s law,’” but Moutsos says it’s not lawful to shut down people’s businesses, force them into their homes and tell them to stay away from each other and wear masks.

The Friday District 25 School Board meeting will be held at 9 a.m. in the board room at the Education Service Center, 3115 Pole Line Road in Pocatello.