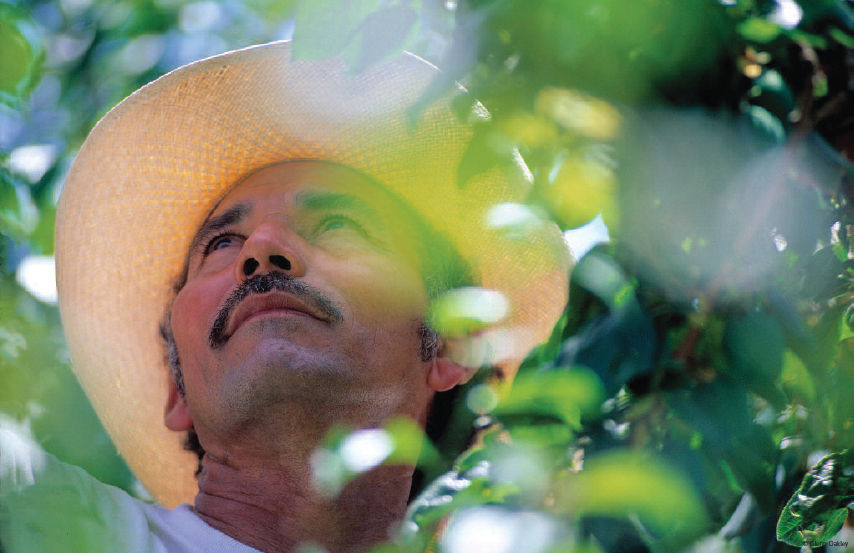 A worker picks crops at Robinson Orchards in Sunnyslope, Idaho. 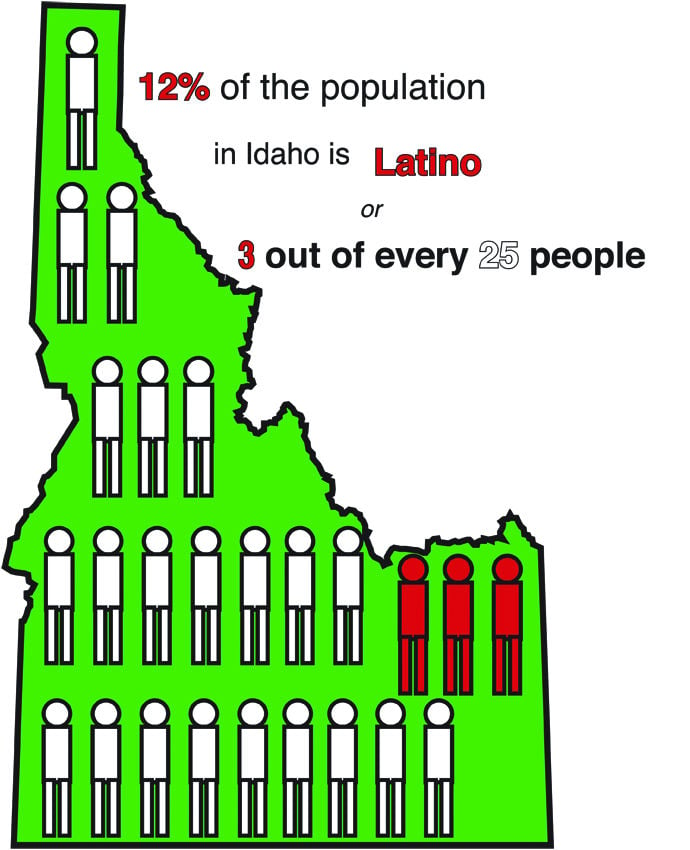 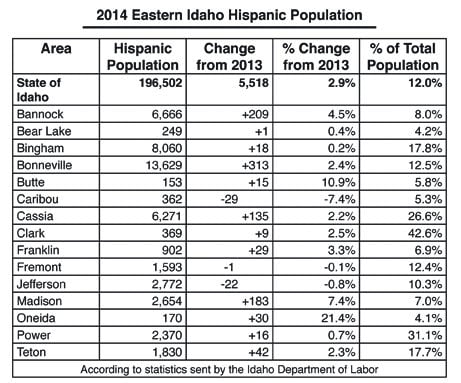 A worker picks crops at Robinson Orchards in Sunnyslope, Idaho.

Hispanics have been woven into the fabric of Idaho ever since it was granted statehood in 1890.

They came as trappers and traders then, and as the state’s agricultural industries grew, they worked in fields and on railroads. The labor they provided helped build the Gem State into what it is today.

Today Latinos have the fastest rate of growth of any racial group statewide — more than double the growth percentage of the white population.

However, Latinos are mostly still working the same types of jobs they did in the state’s early decades, and low wages, health problems and a lack of education are still issues for the Latino community across Idaho.

Contrary to stereotypes, Idaho’s Hispanic population is predominantly born in the United States. It’s also a young population — most Gem State Latinos are under the age of 30.

Between mid-2013 and mid-2014, the Hispanic population of the state increased by 2.9 percent, the fastest rate of growth for this demographic since 2011, according to the Idaho Department of Labor.

the state’s total. This number is a best estimate based on a variety of statistics and accounts for both undocumented and naturalized Latinos in the Gem State, the Department of Labor said.

In the eight counties that make up Southeast Idaho — Bannock, Bingham, Bear Lake, Bonneville, Caribou, Franklin, Oneida and Power counties — the Hispanic or Latino population accounts for about 9 percent of the total, slightly below that state average.

According to the most recent Pew Research poll, 85 percent of Idaho’s Hispanics are Mexican or of Mexican descent, which prompted the opening of a Mexican Consulate in Boise in 2008.

Mexican-Americans and Mexican immigrants have lived and worked in Idaho since the late 1800s, according to “Voces Hispanas,” a book by University of Washington professor Erasmo Gamboa, which includes excerpts from the Idaho Hispanic Oral History Project.

Idaho’s initial Latino population was mostly men, coming to the untouched western states to trap and trade. While many Hispanics worked in Idaho during the late 1800s, very few settled here.

Idaho’s Latino population didn’t experience any significant growth until the 1900s when a combination of political strife in Mexico and a booming American economy kickstarted immigration across the southern border, according to Gamboa.

In the 1920s, Congress restricted immigration from Asia and Europe causing U.S. businesses to turn to Mexican immigrants as a cheap labor source to work on railroads and in fields, according to the Idaho Human Rights Education Center.

During World War II, the Bracero program brought Mexican citizens into the U.S. to fill a need for labor, especially on farms in the western states. In 1948 the program was shut down in Idaho because of discrimination, poor housing and harsh work environments. However, as was the case in all the states where Braceros were employed, the Mexican laborers stayed in Idaho and continued to work.

Immigration to the U.S. from Mexico continued to grow in the 1980s through the first decade of the 2000s thanks to a strong U.S. economy and a demand for cheap labor in industries like construction and agriculture.

In recent years the net immigration between the U.S. and Mexico has dropped to zero, according to the Pew Research Center, because of a poor U.S. job market caused by the recession and a growing Mexican economy. Now the majority of our country’s Hispanic population is made up of U.S. citizens, either through naturalization or birthright citizenship.

However, between 2009 and 2012 Idaho was one of only seven states that saw a notable increase in its unauthorized immigrant population, an increase of about 10,000 undocumented immigrants.

“We see a lot of people from southern states like Arizona coming up here during harvest season to work,” said Adriana Flores, a nurse at the Aberdeen Health West Clinic. “We do have issues with people being uninsured because they are undocumented or they don’t qualify.”

In the U.S., Latinos are the fastest growing minority group and tend to grow at a much faster rate than the population as a whole.

“This Hispanic population is growing at a much faster clip than the population as a whole. In towns like Aberdeen you have about a 50/50 split of white and Hispanic births,” said Dan Cravens, a regional economist at the Idaho Department of Labor. “In Bingham County, 1 in 5 residents are Hispanic and that’s a major change.”

According to Idaho Department of Labor statistics released last month, Canyon County near Boise has the largest total Hispanic population in the state, with over 50,000 Hispanics, about 24 percent of the county’s total population. In eastern Idaho’s rural Clark County, a state-high 42 percent of the population is Hispanic, but Clark County only has 867 residents, 362 of which are Hispanic.

Last year, only eight of Idaho’s 44 counties saw any decrease in their Hispanic populations and four of those saw losses of less than 1 percent. Southeast Idaho’s Caribou County saw the largest percentage decrease statewide in its Hispanic population, but the 7.4 percent drop only amounted to an overall decrease of 29 Latinos in Caribou’s census.

“But I wouldn’t bet on it,” said Cravens, “There are a lot of things that can change that.”

However, there are still some major inequities between the growing Hispanic population and the white population, which still accounts for over 90 percent of the state’s total population.

In Idaho schools, Latino children trail behind their white counterparts on both math and reading tests, have higher high school dropout rates and achieve lower college graduation rates. In 2012 over 23 percent of Idaho’s K-12 students were Hispanic but Hispanics made up less than 7 percent of the state’s college students, according to the U.S. Census Bureau.

“There is a tradition of low-wage field jobs in these communities,” said Rudy Peña, a former educator and counselor who was born, raised and still lives in Aberdeen. “The way to survive is to have everybody work, so kids would miss school to go to work. If (Hispanic) students didn’t feel comfortable in school they didn’t go. They know they can always work.”

The Center for Community and Justice in Boise recently filed a civil rights complaint against the Idaho State Department of Education, the Idaho Charter School Commission and Idaho’s 48 charter schools after statistics showed inequities in the opportunities and representation of Latino students, students with limited English, students from low-income families and students with disabilities in the state’s charter schools.

This gap in educational achievement helps perpetuate the earnings gap between Hispanics and the rest of the population. According to the Pew Research Center, in 2011 the median personal income of Hispanics in Idaho was $17,000 per year, $8,000 less than the median income of the white population, and the percentage of Hispanics living below the poverty line in Idaho was more than double the percentage of whites.

With higher rates of poverty come higher rates of obesity, diabetes, teen pregnancy and heart disease. According to the Centers for Disease Control, cancer, heart disease, accidental injuries, stroke and diabetes were the top causes of death for Idaho Latinos in 2010, and according to a 2012 study done by the University of Idaho 50 percent of Idaho’s Hispanic population lacked health insurance.

“In these communities they’re dealing with their immediate needs, making it hard to plan for the future,” said Peña. “It’s the ‘now’ things they have to take care of. But we have to get out of the mindset that any job will do.”

Have a story idea?

Contact Journal reporter Cydney McFarland if you have a story you’d like us to pursue as part of our series. Cydney can be reached at 208-239-3523 or cmcfarland@journalnet.com.