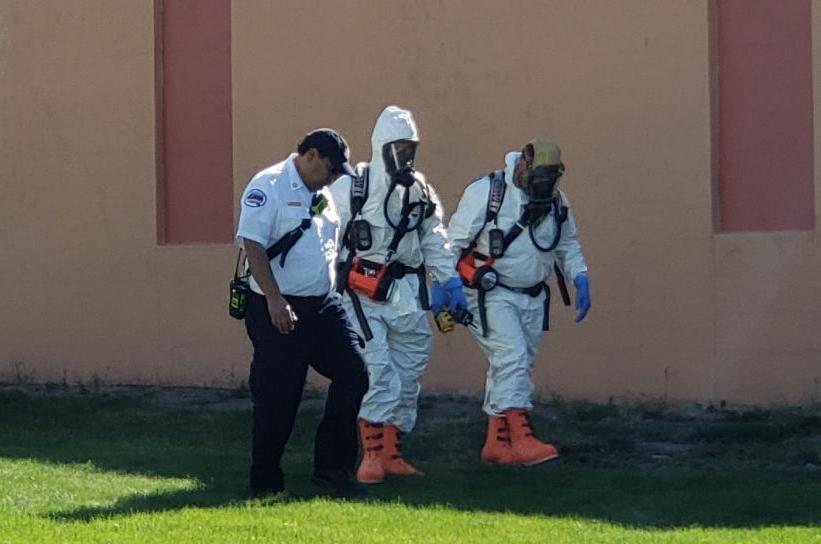 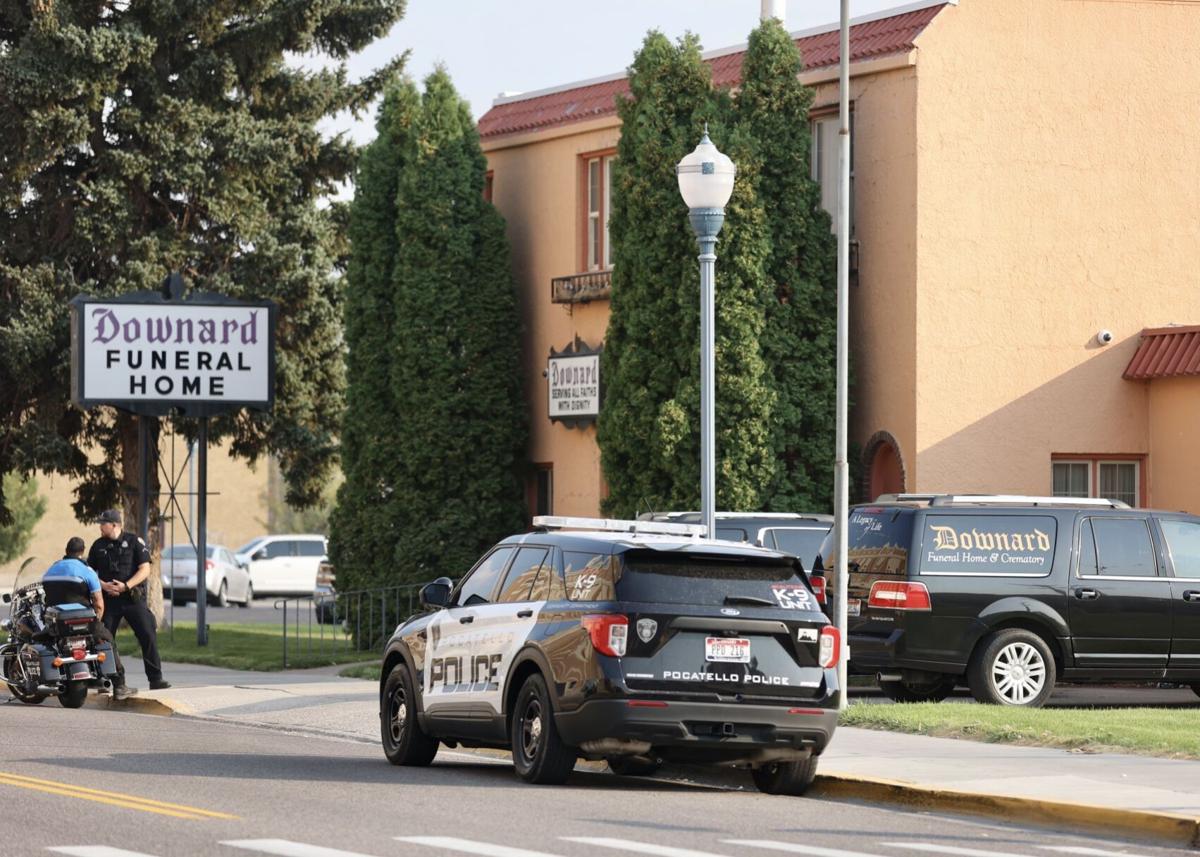 Police executed a search warrant on Downard Funeral Home in the 200 block of North Garfield Avenue on Friday morning and officers remained on the scene until Friday night removing bodies from the building.

As of Friday night, no charges had been filed and no one was in police custody in connection to what police are calling “suspicious circumstances” at Downard, authorities said.

Police said that one of the bodies recovered from the funeral home was badly decomposed and some of the others were also decomposing because they had not been refrigerated.

Police said they turned over the bodies that could be identified to other local funeral homes who are attempting to contact next of kin. The bodies that could not be identified were placed in a mass casualty refrigeration trailer provided by the Ada County Coroner’s Office and will be kept in the trailer as police continue to investigate what was going on at Downard Funeral Home.

Police said they are unsure why several bodies and several fetuses were being kept at the funeral home but Pocatello Police Chief Roger Schei said Saturday afternoon that authorities are aggressively investigating the case.

"We know there are a lot of unanswered questions about the case," Schei stated in a Pocatello police press release. "Our department has those same questions. I want to assure the families involved and the public that the men and women of the Pocatello Police Department will be working hard to provide the answers."

Police would not provide the exact numbers of bodies and fetuses recovered from the funeral home.

The bodies that have not yet been identified and the fetuses will remain in the possession of law enforcement for the time being as part of the investigation.

Authorities said that Lance Peck, who co-owns the funeral home and attached crematory with his wife, voluntarily surrendered his licenses to operate the business to the Idaho Division of Occupational and Professional Licenses on Wednesday.

“On Sept. 1, 2021, Idaho Division of Occupational and Professional Licenses investigators visited Downard Funeral Home and the connected Portneuf Valley Crematory for an annual inspection and in response to information received from the Pocatello Police Department,” said Anne Lawler, the bureau chief for the Idaho Division of Occupational and Professional Licenses. “Our investigators found conditions that were in violation of the Idaho Board of Morticians laws and rules. Lance Peck voluntarily surrendered his licenses to practice as a mortician in Idaho and to operate Downard Funeral Home and Portneuf Valley Crematory. Pocatello police are now leading the investigation with the Idaho Division of Occupational and Professional Licenses providing support as necessary. We are unable to provide additional information at this time related to Pocatello police’s ongoing investigation.”

The Idaho State Journal this week obtained a copy of previous disciplinary actions against Peck from the Idaho Division of Occupational and Professional Licenses as well as troubling details related to missing bodies that were supposed to be donated from Downard to Idaho State University’s anatomical donation program. The matter escalated to the point that ISU relayed its concerns to the Bannock County Prosecutor’s Office and Pocatello police for review.

Downard Funeral Home was founded in 1931. Peck purchased the well-respected Pocatello business in September 2007 after having worked with the previous owners since 1996. Peck has not returned several requests for comment regarding the police investigation of his funeral home.

The investigation into the circumstances surrounding the funeral home, which also contains Peck’s Portneuf Valley Crematory in the same building, continued Friday with Pocatello police obtaining and executing a search warrant of the building after a badly decomposed body was found there earlier in the week, police said.

A foul smell could be detected outside of the funeral home on Thursday and Friday and police said the odor was coming from dead bodies inside the building.

The Ada County Coroner’s Office delivered its mass casualty refrigeration trailer to Pocatello on Friday morning to store the bodies found in the funeral home as part of the ongoing investigation, Pocatello police said.

Police cars and other emergency vehicles as well as gurneys and tarps were used to block the removal of the bodies at the funeral home from public view on Friday.

The bodies were taken by police and Bannock County Coroner’s Office staff from the rear of the funeral home to the refrigeration trailer starting on Friday morning. The last body was removed on Friday night.

Police temporarily shut down some of the streets around the funeral home during the removal of the bodies and urged the public to stay away.

Police and the other emergency responders finally left the scene late Friday night after being at the funeral home for more than 24 hours.

At least some of the investigation into Downard Funeral Home began in the fall of 2020 when ISU uncovered alarming information related to its anatomical donation program. For more than two decades Downard was the only local funeral home supplying bodies donated to science to ISU.

Responding to questions from the Idaho State Journal sent via email, ISU spokesperson Stuart Summers confirmed that ISU had a longstanding and exclusive relationship with Downard Funeral Home that continued when Peck and his wife became owners in September 2007. Records related to ISU receiving anatomical donations from Downard Funeral Home date back as far as 1996. In May 2020, ISU formally ended its working relationship with Downard, Summers said via email.

“Because Downard failed to provide donations during multi-year periods (2011-2014 and 2017-2020), ISU entered into a relationship with the University of Utah to obtain (anatomical body donations),” Summers said via email.

Summers also said ISU did not press the issue with Downard because needs were being met through the University of Utah, though it had received multiple intent-to-donate forms from living prospective donors in the Pocatello area.

“Due to the lack of donations, ISU formally notified Downard that we would no longer work with their funeral home as of May 27, 2020,” Summers said. “ISU then established a formal process with Wilks Funeral Home, which has already resulted in 16 local donors between July 2020 and March 2021.”

According to ISU’s policy regarding anatomical donations, depending on the timing of the donation and the condition of the body, ISU will retain the donated body for up to four years before it’s returned to the funeral home so the person’s family can have the deceased buried or cremated.

When asked if ISU is currently missing any bodies that should have been received through the anatomical donation program, Summers said, “When (ISU) began working with Wilks Funeral Home, the university notified individuals who had filed an intent-to-donate form of the change. In the process, the university learned some families believed the remains of their deceased loved ones had already been donated to Idaho State University through Downard Funeral Home, but the university had no records of these donations.”

Summers on Friday said ISU returned the final five anatomical donations from Downard back to the funeral home in April 2017. Approximately four years later, one of those families contacted the university to report that they had never received their loved one’s remains, Summers said.

Additionally, two other families who had filed intent-to-donate forms with ISU called the school after they were informed of the funeral home switch and reported they had already been told by Downard that their loved ones were anatomically donated to the university, said Summers, but ISU had no such records of ever receiving the bodies from Downard.

“After learning of these irregularities, Idaho State’s legal office immediately requested a comprehensive internal audit of the University’s records and dealings with Downard in the fall of 2020,” Summers said via email. “The audit indicated multiple causes for concern regarding Downard Funeral Home. As a result of the audit, ISU filed formal complaints with the Bannock County Prosecuting Attorney’s Office, the Pocatello Police Department, and the Idaho Division of Occupational and Professional Licenses in spring of 2021.”

That investigation is still ongoing, according to Bannock County Prosecutor Steve Herzog.

PROBATION, FINES AND OPERATING WITHOUT LICENSE

The most recent concerns are not the first between ISU and Peck’s funeral home.

In 2015, Peck was placed on a six-month probationary period by the Idaho Division of Occupational and Professional Licenses and ordered to pay $8,000 in fines, investigative costs and attorney fees stemming from three violations, authorities said. In addition to operating the funeral home without a license from July to October 2013, Peck failed to properly handle the remains of a person who had died in 2012 and had wanted to be anatomically donated to ISU. Ultimately, the body was not donated to ISU and Peck told Idaho Division of Occupational and Professional Licenses investigators that he cremated the body, though Peck kept no records of the cremation, authorities said.

Then in 2018, Peck had a six-month suspension of his license shelved and was placed on a two-year probationary period again after he told the family of someone who died that their loved one’s remains would be donated to a forensic canine program but never completed the donation, according to the Idaho Division of Occupational and Professional Licenses. The interactions between the family of the person who died and Peck lasted for over a year, involved Peck threatening legal action if one of the family members didn’t stop contacting him, and, despite the assurances from Peck that the cremated remains were donated to the forensic canine program, ended with Peck locating the person’s remains in his crematory in November 2017, the Idaho Division of Occupational and Professional Licenses said.

Peck completed his most recent probationary period in September 2020.

The Idaho Division of Occupational and Professional Licenses has not released the names of any of the families who’ve filed formal complaints against Peck.