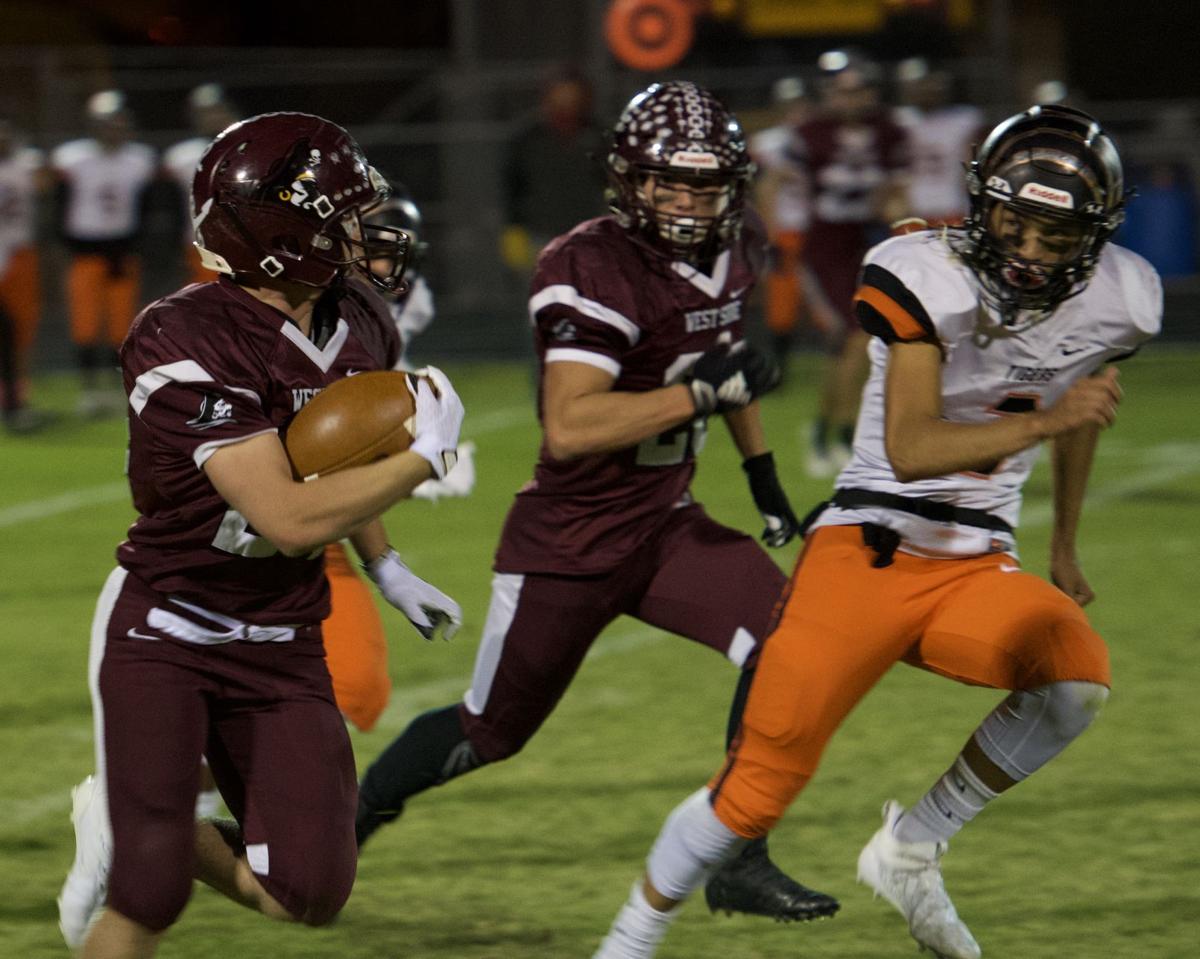 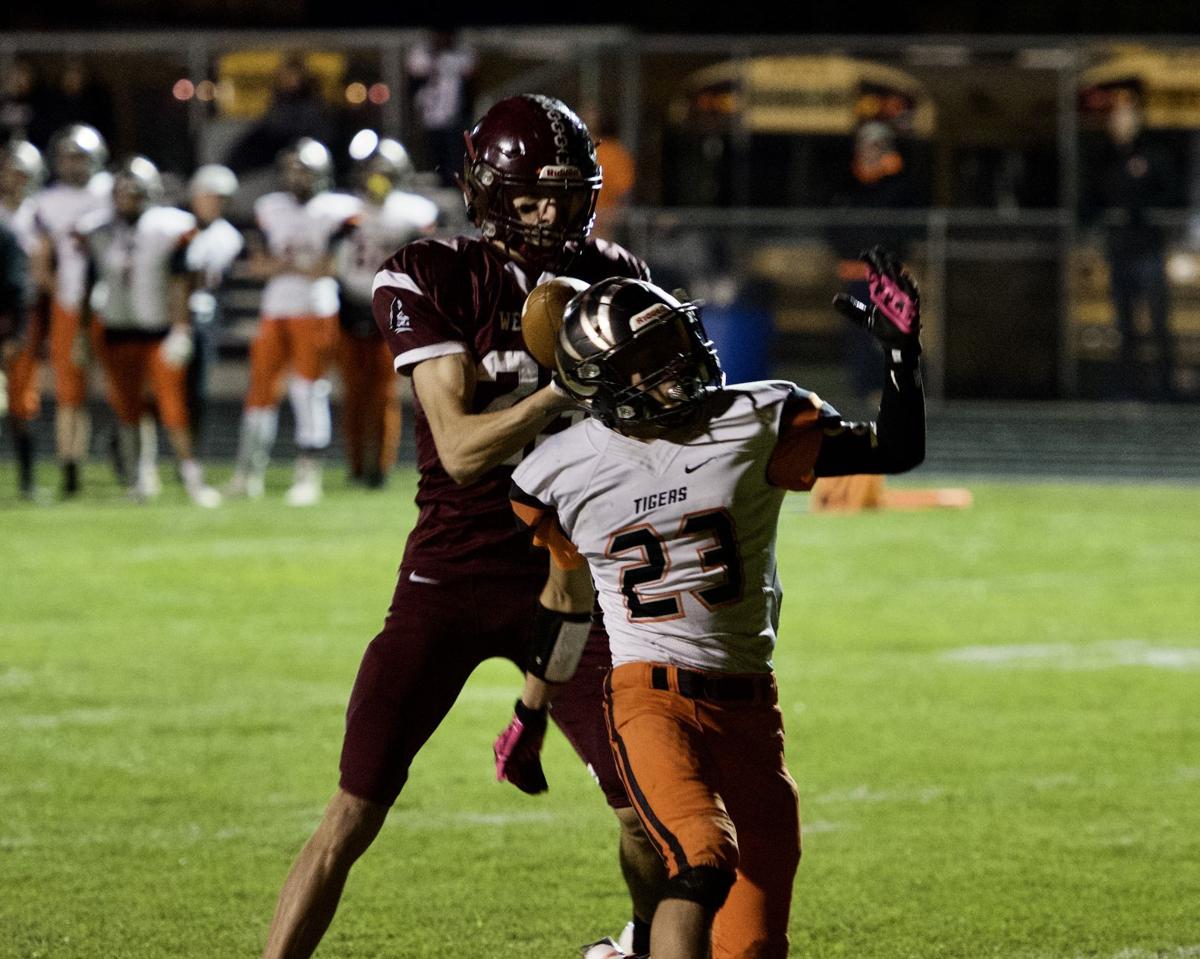 DAYTON — There was no doubt West Side showed up ready to play Friday night at Lyle S. Henderson Field.

The Pirates scored touchdowns on their first six possessions, recovered three fumbles and held visiting Aberdeen to just 143 yards of total offense. It all added up to another convincing district win, 42-0.

“The kids were really in tune,” West Side head coach Tyson Moser said. “They had a great week of practice. Hopefully, they will learn from that. When we prepare right and come out firing on all cylinders, we can do a lot of good things.”

It was the fourth shutout this season by West Side (7-0 overall, 3-0 district).

“It was amazing tonight,” Pirates’ center Zeth Groll said. “Once we get going, we are hard to stop. ... I really think we can be good, but we need to keep our heads on and not look forward. We need to go a week at a time.”

The Pirates certainly were efficient in the running game, as well as the few passes they attempted. West Side rushed for 293 yards on 28 carries, which equates to more than 10 yards per carry.

“We have a goal every game to have a lot of rushing yards,” Groll said. “We make that a priority.”

“That’s what we do, run the ball,” Moser said. “That is our style of football. I thought the offensive line did a good job and opened up some holes. They had a great night. The first half they were blocking extremely well and hard and going to the whistle.”

Six Pirates had carries in the game. Parker Henderson led the way with 125 yards on just four carries and scored a TD. Cristian Plancarte gained 65 yards on five rushes and also found the end zone. Cage Brokens had the most carries with eight, gaining 47 yards and scoring twice.

Brown started the scoring with an 8-yard TD toss to Taze Stegelmeier on the first offensive play of the game for the hosts. The short field came courtesy of Bryler Shurtliff, who returned a punt 36 yards after the Tigers (4-3, 1-1) started the game by going three-and-out.

The second possession was a bit more challenging as West Side began on its own 39. Three plays later, Plancarte busted free for a 49-yard TD run with some big blocks by linemen downfield.

The Tigers lost their first fumble of the game on the ensuing play, and Easton Henderson came up with it on the Aberdeen 17. Brokens picked up three yards on a fourth-and-two play, then scored from four yards out as the Pirates took a 21-0 lead into the second quarter.

Parker Henderson helped set up the fourth TD of the night when he blasted through a big hole by the offensive line for a 45-yard gain. Brokens powered in from two yards out.

“We work our butts off at practice, and that starts with our coaches,” Groll said. “I think the O-line was getting overlooked early in the season. We took that personal and wanted to make sure everybody in the state knew we had a good line.”

After setting up the fourth TD of the game, Parker Henderson got in on the action as he ripped off a 75-yard score, stiff-arming his way free downfield.

West Side made it 42-0 with 4:39 still left in the first half. The Tigers had turned the ball over on downs, giving the Pirates a short field to work with. Brown zipped in a 7-yard TD strike to Shurtliff.

The Pirates did get the ball back just before the break when Aaron Millburn recovered a fumble near midfield. Millburn had four tackles for loss in the game.

West Side’s offense only got the ball three times in the second half, punting twice and running out the clock on the final possession of the game.

“It’s disappointing because you want to come out and keep firing like you were in the first half,” Moser said. “You try and tell them to stay intense, but they are 16, 17 and 18-year-old kids, and they don’t listen. I was happy with our defense. They were on the field a lot and kept them out of the end zone.”

As the clock rolled in the fourth quarter, the only question left to answer was whether the Tigers would score. They ate up most of the final period with a 21-play drive that covered 87 yards. Aberdeen converted three fourth-down and two third-down plays during the march. However, it ended on the Pirate 5-yard line when the ball fell on the ground.

For the third time on the night, the West Side defense came up with the loose pigskin. Jacob Stokes recovered the final fumble.

Stegelmeier led the Pirates with 15 tackles, including a sack.

“Aberdeen has a great team, and they are well coached,” Moser said. “It kind of snowballed on them. Our defense does a great job, and our defensive coaches do a great job. The kids believe in the scheme and execute it.”