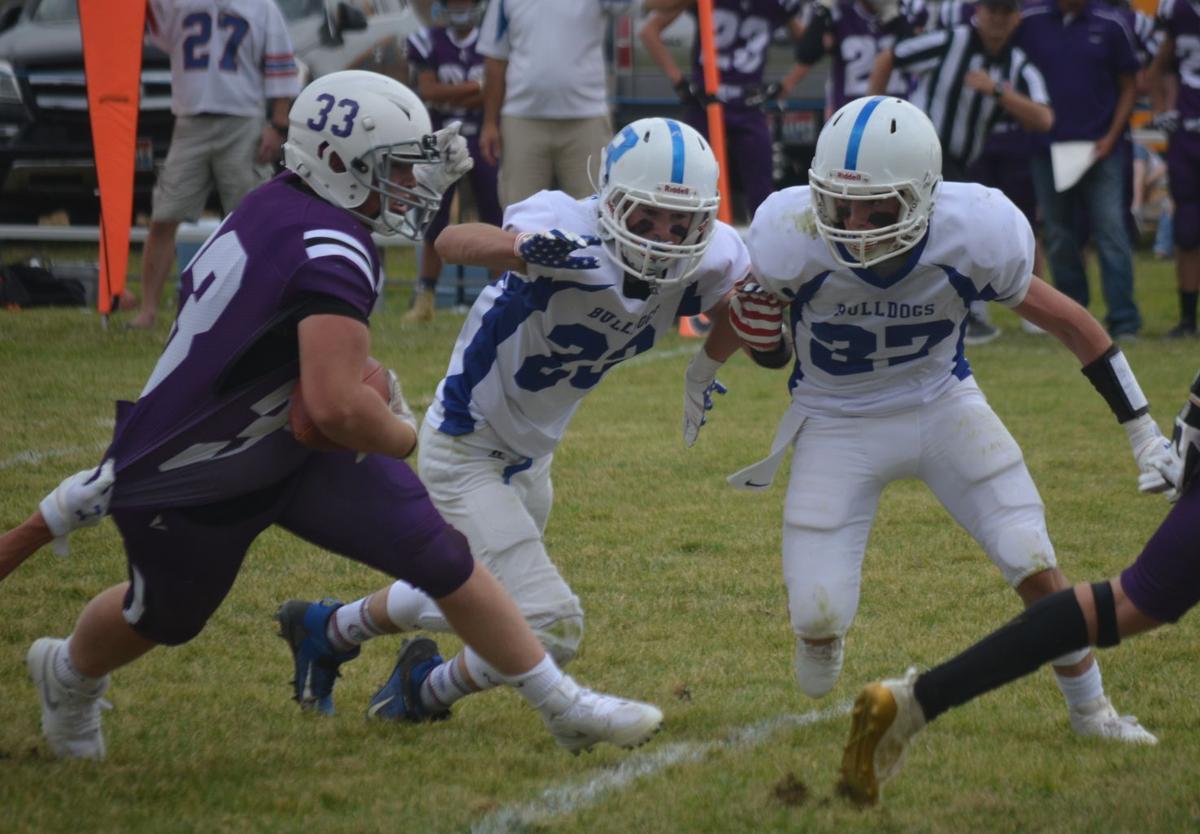 North Gem fullback Brett Yost (33) fights for yardage as two Rockland defenders close in during a game at Rockland on Friday. 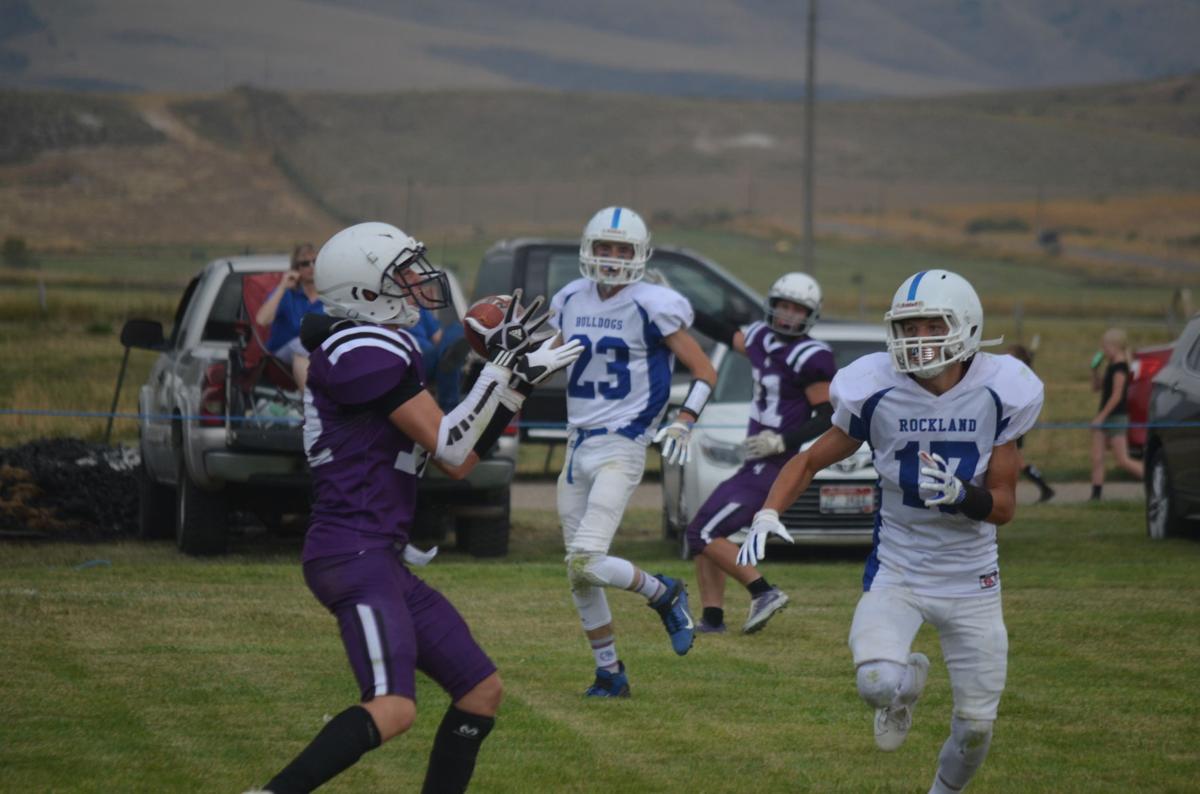 North Gem's Logan Corta (in purple) hauls in a fourth-quarter touchdown as Rockland's Brigham Permann defends during a game at Rockland on Friday.

North Gem fullback Brett Yost (33) fights for yardage as two Rockland defenders close in during a game at Rockland on Friday.

North Gem's Logan Corta (in purple) hauls in a fourth-quarter touchdown as Rockland's Brigham Permann defends during a game at Rockland on Friday.

ROCKLAND — With Sho-Ban not fielding a team this year, the only two 1A DII District 5 teams playing in 2020 faced off Friday, and the result was a study in contrasts.

At Rockland’s homecoming, the North Gem Cowboys used their heavy-run option game and an opportunistic defense to dominate possession and stifle the Bulldogs’ previously high-flying, wide-open passing game in a 33-22 win.

“We had prepped all week for this game,” North Gem coach Corry Hatch said. “I don’t know if I’ve ever put more hours into prep, not only on the scouting front, but also on the field. We had some long practices. It was tough on the guys physically and mentally during the week, but they see the rewards of it now.”

Rockland came into the game at 3-0 and ranked No. 3 in the classification, with a 44-24 win over Camas County to start the season the Bulldogs’ lowest-scoring outing.

North Gem entered at 0-3, scoring a total of 32 points in those three losses.

But Hatch figured that his team was due for a turnaround. Two of North Gem’s losses were to 1A DI teams, and the other was a two-point setback against Camas County.

Throughout the losing streak, Hatch bemoaned the little things that had gone against his team — turnovers, penalties and bad clock management chief among them.

The shoe was on the other foot Friday.

North Gem forced Rockland quarterback Braden Permann, who accounted for eight touchdowns a week ago against Murtaugh, into three turnovers.

Permann still finished with 260 total yards — 152 passing, 108 rushing — but his usual ruthless efficiency wasn’t there, as he completed just 13 of 23 passes.

After the game, Hatch showed off his notebook, packed with notes on every offensive play from Rockland’s first three games.

“I have every defensive alignment, every down-and-distance,” Hatch said. “In certain formations, we knew where they wanted to go with the ball. I could have been wrong, but the tendencies through the first three games (showed) there were certain guys they wanted to go to, and our thing was to take them away.”

The Cowboys, whose failure to score inside the 10 at the end of the first half potentially cost them close games against Grace and Camas County, punched in a touchdown in the final minute of the first half to take a 21-6 lead to the break.

Fullback dives to Brett Yost opened up the middle first, forcing Rockland’s ends to pinch in, before the Cowboys started attacking the edges with speed options and sweeps keyed by quarterback Bridger Hatch.

“This thing starts and stops with the dive,” Corry Hatch said. “All week, we prepped both triple option and zone option, and that gives two different looks for (Yost) to get the dive. He played a heck of a game.”

Outside of a quick three-play drive that gave them an 8-0 lead to start the game, Rockland’s offense just couldn’t match North Gem’s attack.

Used to big plays, the Bulldogs weren’t able to grind things out, and North Gem’s slow pace made it hard to rev up their previously potent offense.

“We’re a fast-paced team and we need the ball to score,” Rockland coach Gerry Hunter said. “Time of possession was a big deal. ... When they go on a 70-yard drive and take seven minutes off the clock, you don’t get a lot of chances. That’s a recipe for disaster.”

Two second-half turnovers also hurt Rockland, as Braden Permann fumbled on a wild double-reverse pass and threw an interception over the middle to his opposite number, Bridger Hatch.

The Bulldogs closed to within 21-16 going into the fourth quarter and had a chance to get the ball back down one score, but on fourth-and-goal from the 6, Bridger Hatch floated a play-action pass to Logan Corta in the back of the end zone for the clinching touchdown.

North Gem added another touchdown after that before Braden Permann got one back, scrambling for a scintillating 35-yard score with under two minutes to go.

It was the first look at the sparkling, highlight-reel Rockland offense that had carried the Bulldogs to 3-0 — and it was the only glimpse that North Gem let the home fans have.

“I knew, man for man, we matched up really well,” Corry Hatch said. “Defensively, we had to put in the work. We knew they had put up big numbers, we had seen the film. But I knew that we could get these guys ready.”