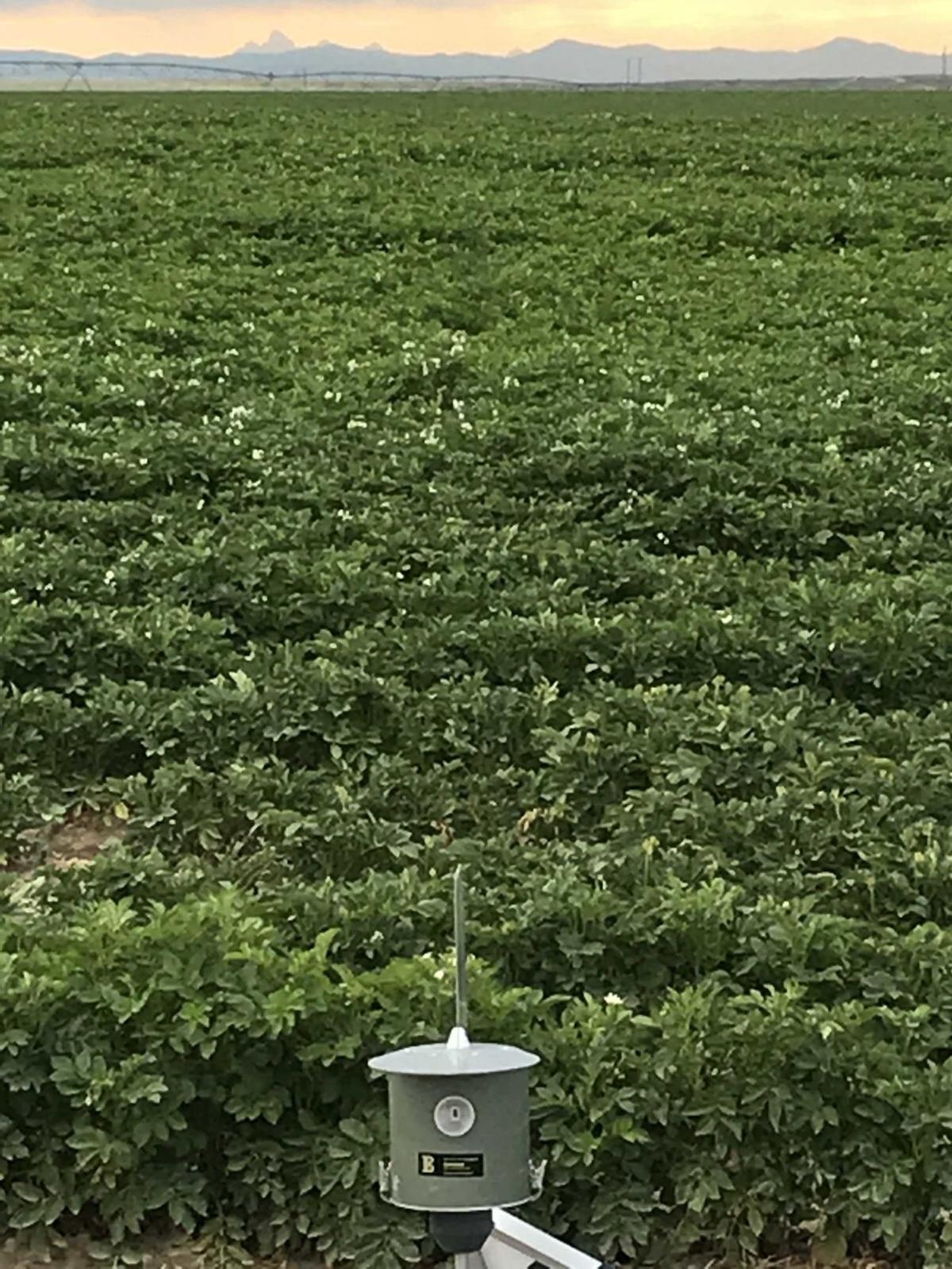 Spore trappers like this one have helped University of Idaho keep tabs on the arrival of fungal pathogens statewide. 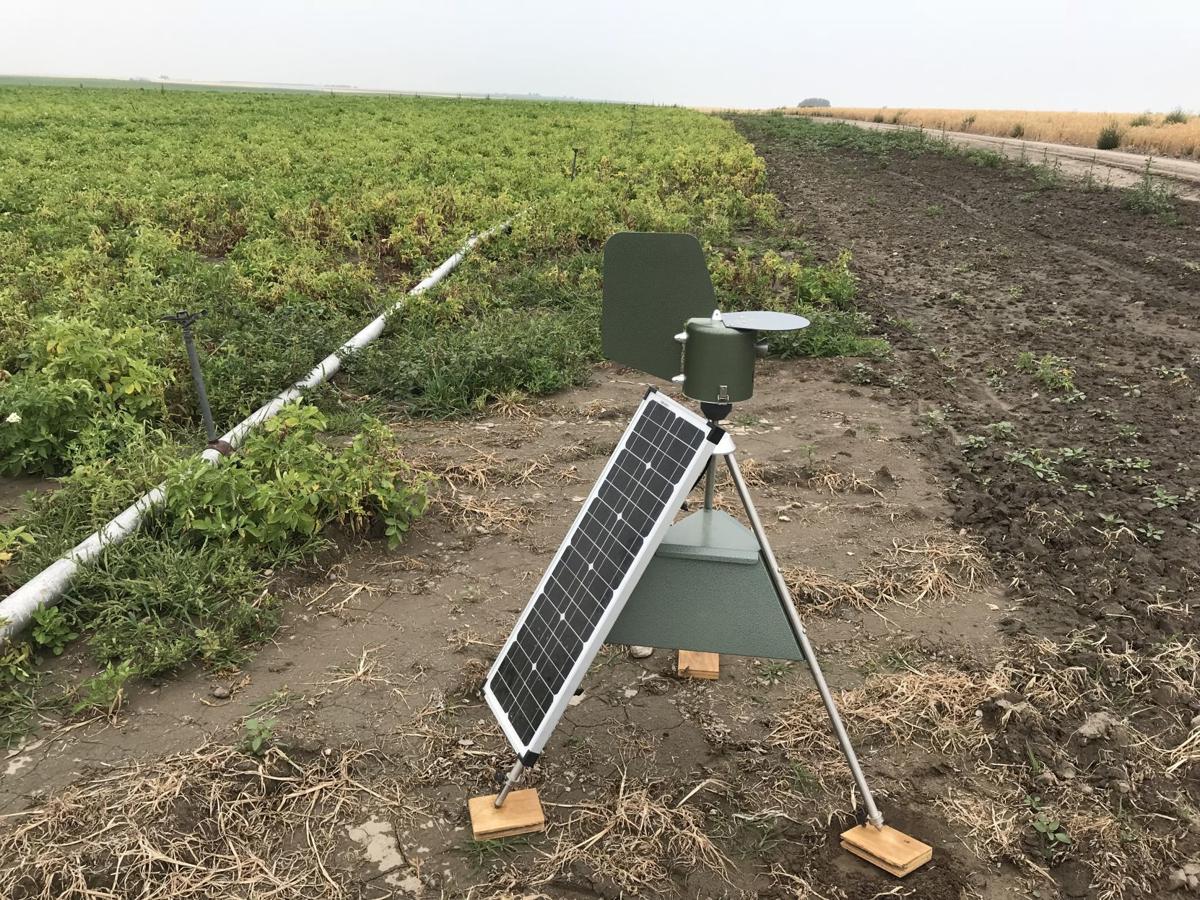 A spore trapper is positioned next to a potato field as part of the University of Idaho Extension network, which uses 15 spore trappers to give farmers throughout Idaho and in parts of Washington and Oregon advanced warning of the arrival of fungal pathogens. 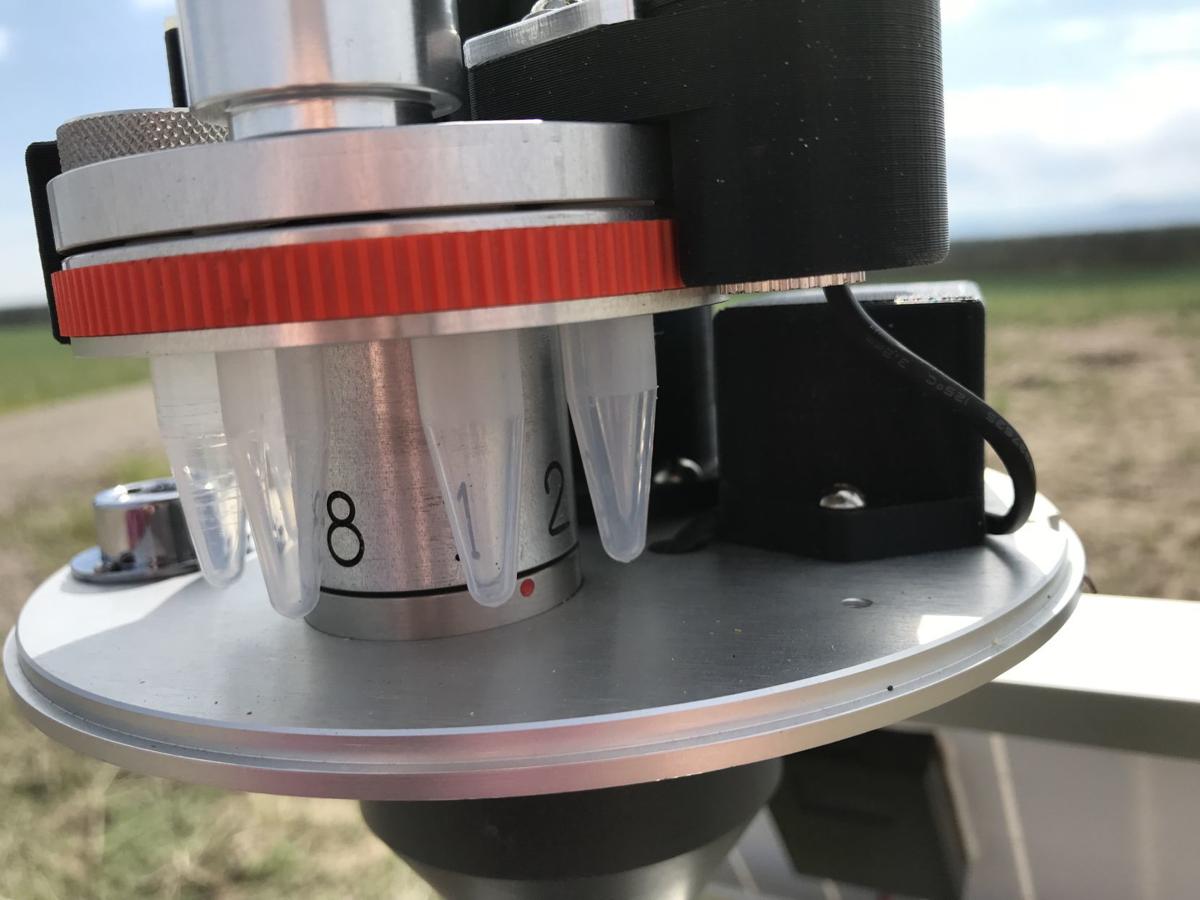 University of Idaho's spore trappers collect samples of spores in separate vials for each day, and samples are collected on a weekly basis for laboratory testing.

Spore trappers like this one have helped University of Idaho keep tabs on the arrival of fungal pathogens statewide.

A spore trapper is positioned next to a potato field as part of the University of Idaho Extension network, which uses 15 spore trappers to give farmers throughout Idaho and in parts of Washington and Oregon advanced warning of the arrival of fungal pathogens.

University of Idaho's spore trappers collect samples of spores in separate vials for each day, and samples are collected on a weekly basis for laboratory testing.

The Paul-area late blight outbreak wasn’t much of a story among the state’s potato farmers in 2019.

University of Idaho Extension researchers say that fact may be due largely to their new network of 15 spore trappers, strategically placed near Idaho farm fields from Parma through Tetonia.

The network — intended to provide growers early warning when important fungal pathogens arrive in the area — was launched in 2017, in participation with industry partners and commodity organizations.

“We are starting to get known around the world as one of the leaders in doing spore trapping,” said the project’s lead researcher, James Woodhall, a UI assistant professor of plant pathology stationed at the Parma Research & Extension Center. “We’re doing it on a scale that perhaps they’re not doing anywhere else in the world.”

The area’s wet and cool weather at the time was ideal for the disease to take hold. Sure enough, late blight infection was soon confirmed in spud fields in nearby Paul.

Growers who were at risk were promptly notified by UI and sprayed fungicides. The Paul outbreak was quashed, and researchers got their first glimpse of how the UI spore trapping network stands to save Idaho farmers big bucks for years to come.

“This could have blown up into a much bigger problem,” said Kasia Duellmann, a UI Extension seed potato specialist who is participating in potato research involving the spore trapping network. “(Spore trapping) alerted the people in that region to be vigilant and look for it.”

In most other states, late blight spores are ubiquitous, and farmers can anticipate the disease will surface when whether conditions are optimal for it. In Idaho, Duellmann explained, spores may not be present when favorable weather for late blight surfaces. She said predictive models for Idaho need both spore data and weather data — which is a reason why UI is trying to locate its spore trappers near AgriMet weather stations, or its own weather stations.

“There’s no reason to spray if the pathogen isn’t there, and also if the weather isn’t going to spread it,” Duellmann said.

In the Paul area, for example, the spore trapper at Miller Research also detected late blight spores during the 2018 growing season, but the disease was never found in the field, as weather conditions weren’t optimal.

Woodhall believes one of the greatest benefits of the network in 2019 was that it provided a tool to map where spores were present during the Paul late blight outbreak, which helped avoid panic among growers outside of that area.

“We downgraded the risk,” Woodhall said. “We were able to show the infection was highly localized in several close fields.”

Woodhall would like to add a few additional spore trappers in the Paul area, as it seems to be a relative hot spot for late blight activity.

“We’ve been finding with spore traps we get a two- to three-week notice of detection ahead of symptoms of powdery mildew,” Woodhall said.

The network tests for diseases such as late blight, white mold and early blight in potatoes; powdery mildew and Cercospora in sugar beets; white mold in beans; and stripe rust in grain.

Juliet Marshall, a UI Extension cereals pathologist, hopes to use spore traps in conjunction with weather stations to help develop recommendations for when barley and wheat growers should spray to protect their crops from stripe rust. She’s pleased that the university has added five new weather stations to supplement the AgriMet network, including three stations funded by the Idaho Wheat Commission.

“We have a lot of groundwork in order to determine if there’s a good correlation between (stripe rust) spore incidence, spore numbers and disease development,” Marshall said.

Woodhall explained he originally sought a grant for the network from the Northwest Potato Research Consortium — which awards research grants on behalf of the potato commissions of Idaho, Washington and Oregon.

“They encouraged us to think bigger,” Woodhall said.

The network started with four spore trappers purchased with UI departmental and program funds pooled by Woodhall, Duellman and Marshall. The Snake River Sugarbeet Research and Seed Alliance, and the barley, bean, potato, onion and wheat commissions all contributed either for machines or research involving them.

McCain, J.R. Simplot, Basic American Foods and Lamb Weston have also pitched in to buy spore trappers and have aided with providing locations and operating the network.