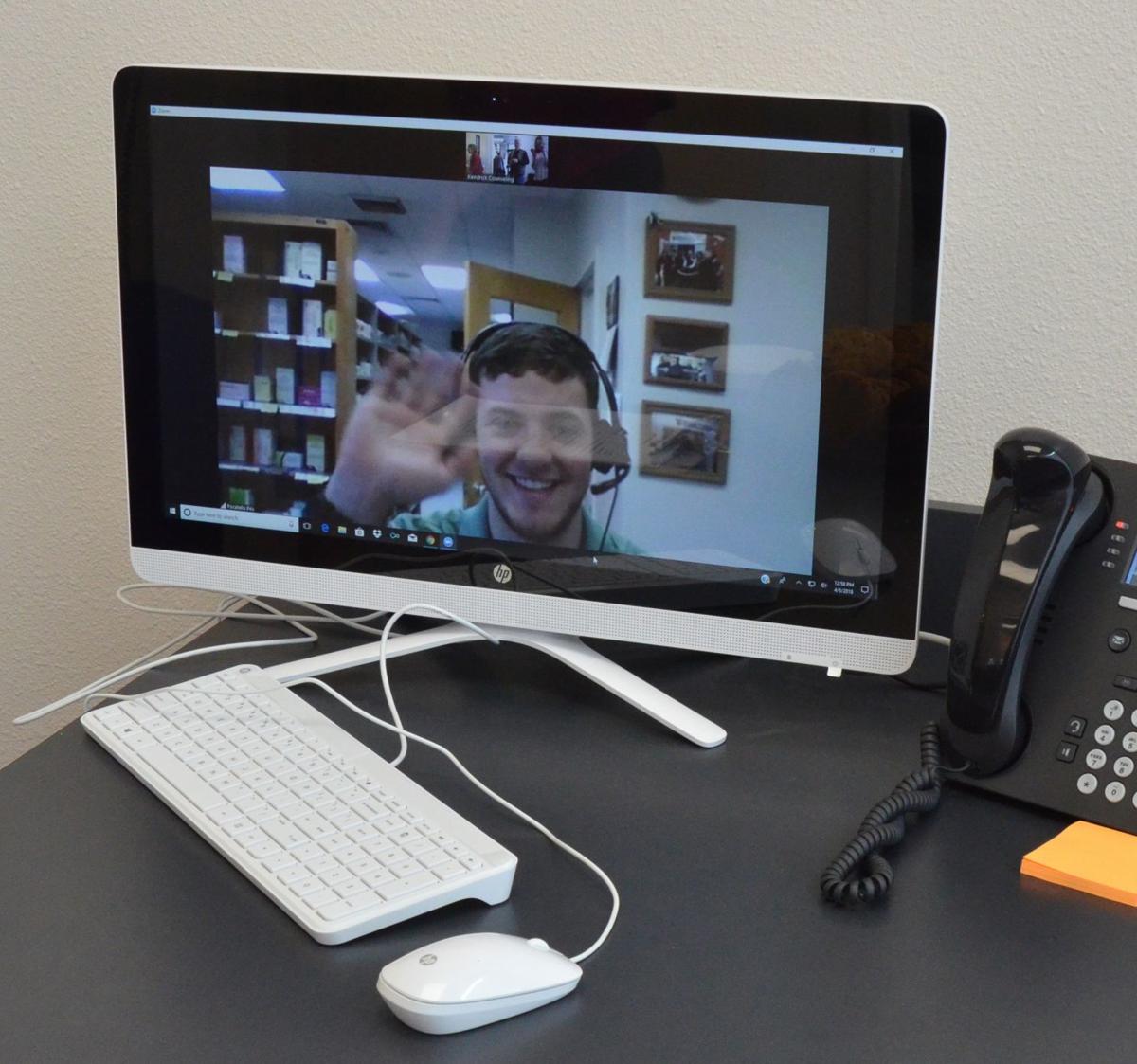 A pharmacist in Pocatello waves to the patient counseling room in Kendrick via the Bengal Pharmacy, a telepharmacy program from the Idaho State University College of Pharmacy. 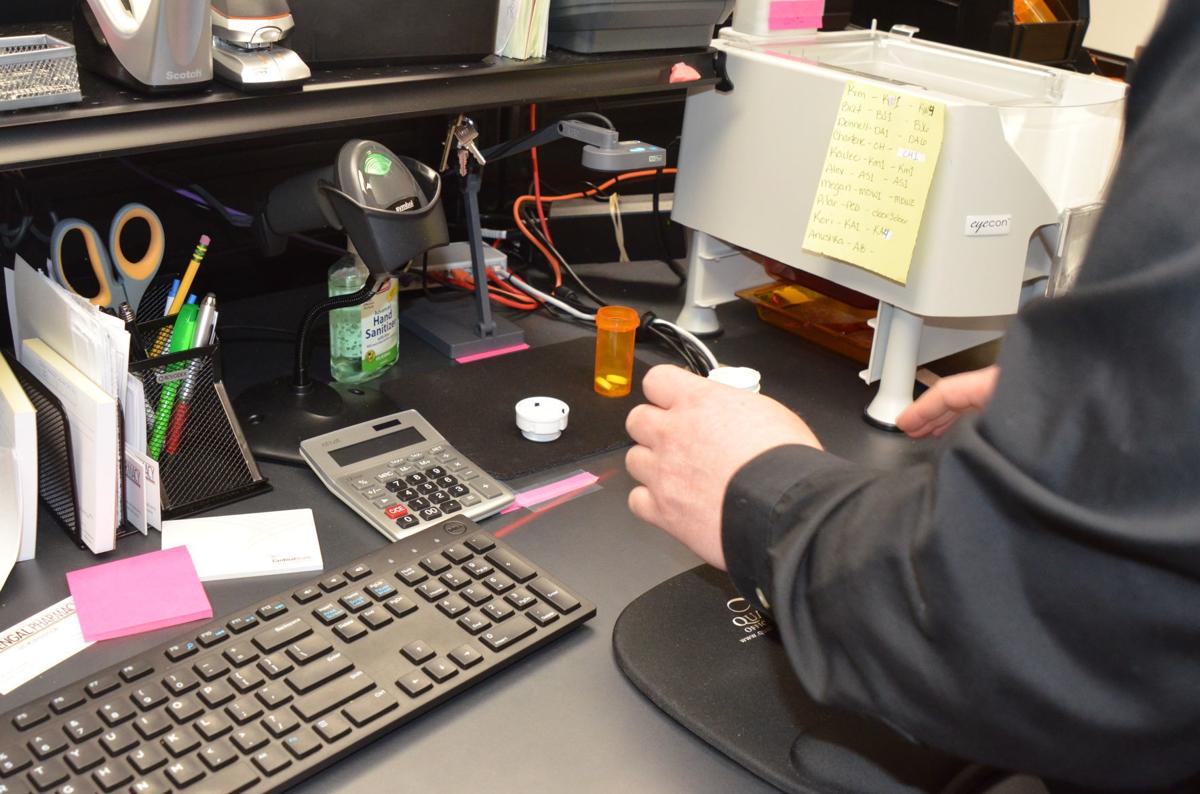 A pharmacist in Pocatello waves to the patient counseling room in Kendrick via the Bengal Pharmacy, a telepharmacy program from the Idaho State University College of Pharmacy.

When William Thompson entered pharmacy school at Idaho State University, he had an idea of where he wanted to work following graduation — right here in East Idaho.

The Blackfoot native, who is entering his third year at the College of Pharmacy, has aspirations of using the skills he gained through ISU to help provide better care and coverage in areas of Idaho that are often overlooked.

And thanks to a number of programs offered through ISU’s College of Pharmacy, students such as Thompson have a number of options to help bring quality pharmacy services to some of the state’s most rural areas.

Throughout the week, Thompson will sit at a desk in Pocatello at Bengal Pharmacy. From there, he has access to technicians staffed at pharmacies in Arco, Challis in eastern Idaho and Kendrick in northern Idaho, providing pharmacy services to those in the small rural towns.

The Bengal Pharmacy is an innovation known as telepharmacy. Through the power of online connection, pharmacy students and staff pharmacists work with pharmacy technicians at each location to meet with patients. Through this, Thompson and his fellow students can connect with patients to discuss their health care options via phone or through a video chat.

“When you do telepharmacy, you have a couple pharmacies per pharmacists so you can provide health care services to the patient, which is really exciting, because the role of pharmacists is expanding,” Thompson said.

Rex Force, vice president for health sciences at Idaho State University, has been at the university for 25 years. In his time, Force said he hasn’t seen an opportunity quite like telepharmacy come up that could help connect rural areas with quality health care while also providing learning opportunities for pharmacy students.

“Arco and Challis, those are communities of around 800 to 900 people,” he said. “Both of those communities, telepharmacy is the only pharmacy in the county. If you think about it, that area is bigger than some states on the East Coast. It’s nearly the size of New Jersey. Obviously it’s low population density, but people have to travel long distances, in most cases about 60 miles one way to the next nearest pharmacy.”

Force believes the advent of telepharmacy also brings a significant economic impact to these rural towns.

“It creates a connection to the community,” he said. “The patrons of the pharmacy are likely to stay in the community and do their other shopping and get their health care there, rather than driving to Salmon, Blackfoot or Idaho Falls.”

The telepharmacy concept has yet to spread nationwide, however. Currently, only 23 states have laws and regulations permitting the practice, with most being allowed in rural states such as Idaho, Wyoming and Montana and some Midwestern states.

According to Berk Fraser , deputy executive director for the Idaho Board of Pharmacy, there are 14 licensed telepharmacy locations in the state. These locations, which are overseen by the Board of Pharmacy, provide a benefit to those in rural areas.

“They can pop up anywhere,” Fraser said. “They can even have one in Boise if they want. They’re rather expensive with the visual requirements. That technology is fairly expensive. But they’re sites that normally could not afford a pharmacy because they can’t support the staffing of a full-time pharmacist and staff there. So this is an avenue to provide pharmacy service to those locations.”

The Board of Pharmacy regulates the technology and training required to open a telepharmacy location.

Rural areas aren’t served by major pharmacy retailers and many small-town pharmacies have fallen to the wayside in recent years due to lack of sales volume and pharmacist retirements.

“There’s a considerable amount of technology that goes into this,” Force said. “But the way to make it work financially is to cut your labor costs and watch your inventory very carefully. So in these rural settings you’re paying a technician and not a full-fledged pharmacist for 100 percent of their time in these rural communities. That makes things more affordable, and the business model is much more doable.”

Still, the ultimate purpose of promoting these telepharmacy locations for ISU is education and service within these rural areas.

“It’s not a huge money-maker,” Force said. “The university is not making a lot of money off this. We’re covering most of our expenses. And really, the telepharmacies were experimental in the first place, and from the university’s perspective we wanted it to be a service for the community, but also a learning and research laboratory.”

Beyond telepharmacy, ISU encourages its pharmacy students to experience working in a rural setting.

“Many of our students get their practical experience in critical access hospitals or in rural pharmacies,” Force said. “We’ve sent students, and regularly send students, out to Fort Hall … we send many students to Bingham, which might not seem that rural, but it is a critical access hospital and has a unique role between Pocatello and Idaho Falls. We also send them to much smaller hospitals than Bingham.”

Force said the College of Pharmacy strives to provide students a rural care experience prior to their graduation. But sometimes, it is a difficult process.

“We look at a class size between our Pocatello and Meridian campuses of about 70 students, and it’s tough to place all of those students in a rural experience,” he said. “But we do work hard at that. Certainly it’s a lot easier to do that in southeast Idaho than it is in Treasure Valley. Those rural areas are relatively close.”

Thompson has noticed the emphasis on rural health care education in his time at ISU and believes it is beneficial given the in-state job market for recent pharmacy school graduates.

“I don’t know if they’re necessarily pushing it, but they’re definitely encouraging people to basically stay in Idaho,” he said. “A lot of the jobs in Idaho that are left are rural jobs, with the market being pretty saturated. But the expanding areas that more rural definitely need more pharmacy access.”

Nationally, the Bureau of Labor Statistics projects employment of pharmacists to grow 6 percent — adding about 17,400 jobs — from 2016 to 2026, noting that increased demand for prescription medications will lead to more demand for pharmaceutical services.

Force said around 70 percent of each graduating class remains in Idaho.

The College of Pharmacy is introducing a new program in the coming year to continue its rural outreach. Thanks to a federal grant obtained through the National Area Health Education Center, the school is establishing an area health education center to assist in bringing quality care to rural areas.

“The idea is to get not only students into the health professions from rural areas, but to get our health profession students out into these rural areas and do it in an interdisciplinary way,” Force said. “So you might have a medical student, pharmacy student and nursing student spending time together in a rural setting.”

The Health Education Center grant provides $370,000 over five years, which Force said will be used to pay for infrastructure and rural health programs.

Programs such as this and telepharmacy are the key components of keeping recent graduates in state, and promoting health care throughout rural areas. And it is something Force hopes the university will continue to promote for years to come.

“The need will never go away,” Force said.