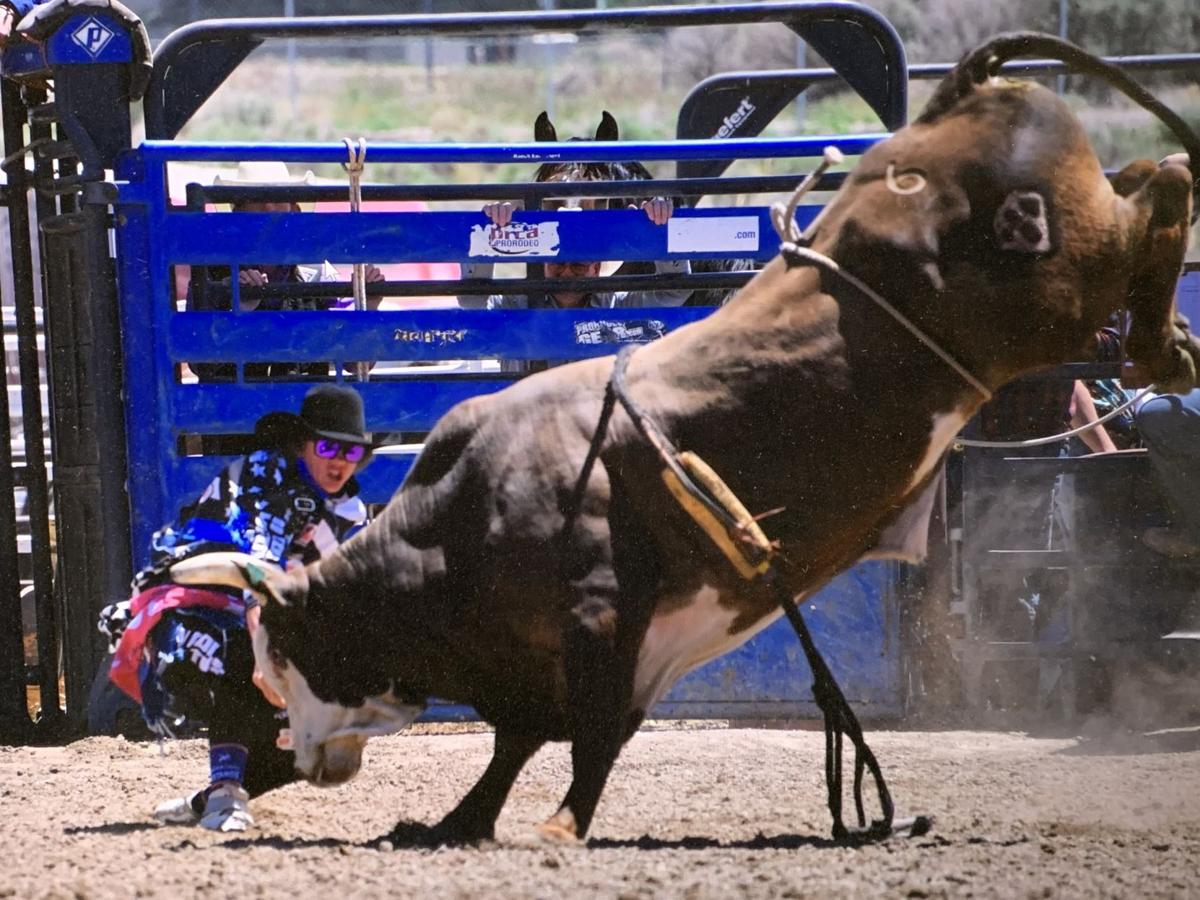 Brock Hansen distracts a bull from a fallen cowboy during the Idaho High School Rodeo Association State Finals, hosted from June 5 to 12 in Pocatello. 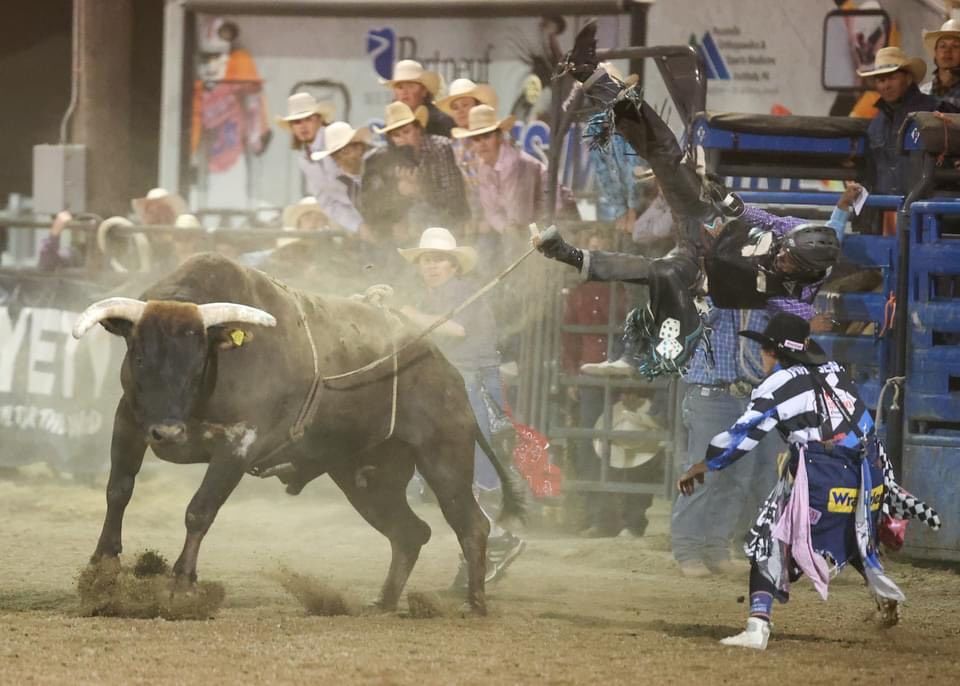 Brock Hansen, wearing the white and blue stripes, watches as a bull rider is tossed during the Idaho High School Rodeo Association State Finals, hosted in Pocatello from June 5 to 12.

Brock Hansen distracts a bull from a fallen cowboy during the Idaho High School Rodeo Association State Finals, hosted from June 5 to 12 in Pocatello.

Brock Hansen, wearing the white and blue stripes, watches as a bull rider is tossed during the Idaho High School Rodeo Association State Finals, hosted in Pocatello from June 5 to 12.

POCATELLO — The crowd instantly hushed after the hind legs of a rampaging bull named Microbrew stomped with full force square on 17-year-old Brock Hansen’s back.

The bull was dragging a bull rider at the Idaho High School Rodeo Association State Finals on Saturday afternoon. Brock, of Hyrum, Utah, was hired as a cowboy protector for the event — tasked with grabbing bulls by the head and directing them to run straight away from any fallen cowboy.

But Brock — a rising high school senior who is among the nation’s top freestyle bullfighters in his age group and has aspirations of going pro — lost his footing on some loose dirt while grappling with Microbrew and couldn’t roll away in time.

Known for being selfless, when Brock regained consciousness from the ferocious hit, his first words to his father, Ron, were, “Is that cowboy OK?”

Ron explained his son takes a knee and prays before he enters an arena with a bull — something Brock has done about 2,000 times. Ron believes divine intervention was at play on Saturday in Pocatello, where the state rodeo finals were hosted from June 5 to 12.

“This hit he took, God was looking over him,” Ron said. “You don’t take hits like that and walk away from them.”

The bull broke the wing of Brock’s No. 3 vertebrae in his lower back. Fortunately, Brock is in such good shape that his back muscles held the piece of his spine in place, and doctors expect it to fully heal. Brock also sustained a concussion, but he’s been released from the hospital and he and his family anticipate he’ll be back in the arena with the sport’s rowdiest bulls within six months of leaving the state finals on a gurney.

“While we were at the hospital, I probably received 25 text messages and I don’t know how many calls,” Ron said, adding the crowd at the finals also received a condition update on Brock after he was taken to the hospital. “It’s kind of a big family. When one gets hurt, it affects everything.”

The incident with Microbrew occurred at about 2 p.m., and it wasn’t Brock’s first run-in with that particular bull. During an earlier event, the same bull struck Brock and sent him flying about 8 feet into one of the chutes.

“People always say, ‘Are you scared of him being hurt?’ No, I’m not because it’s part of what he does. He is good at his job,” Ron said. “... Every (bull rider) knows Brock and they know if he’s in that arena they haven’t got to worry because he’s got their back. That’s a big deal to a bull rider.”

Brock was born in Pocatello and his family remains close with Pocatello resident Janet Face.

“He is all in it and all about making sure every cowboy is safe,” Face said.

Freestyle bullfighting involves a cowboy facing off against a bull and circling in close proximity. It’s scored based on how close a cowboy can get to a bull and how many passes he can make. Brock is following in the footsteps of his father, who was a professional rodeo cowboy for 18 years with the Wrangler Bullfighting series. Brock’s goal is to become the youngest bullfighter with the National Finals Rodeo, a feat he hopes to accomplish by age 19.

Brock aims to pay his way through college with funds from his own business, called BH Livestock. He has his own herd of Wagyu beef cattle and sells cows and vials of bull semen. He also has five bucking bulls, providing both his animals and his expertise to rodeo contractors.

Brock hopes to one day have his own ranch and rodeo company.