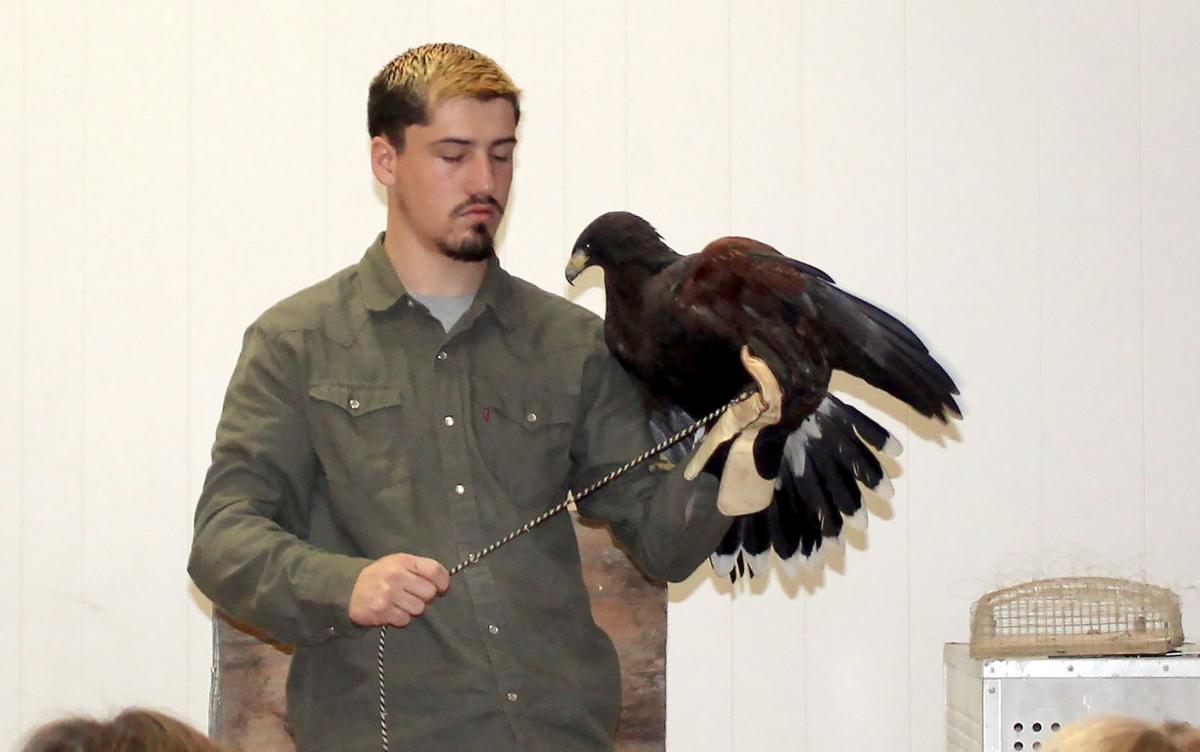 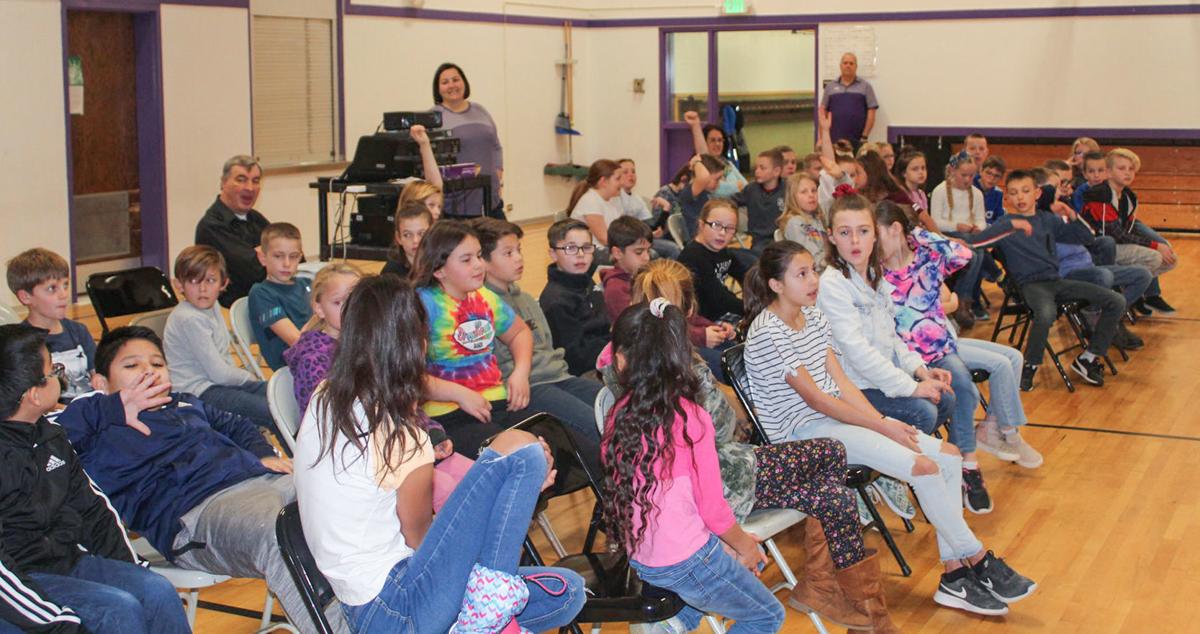 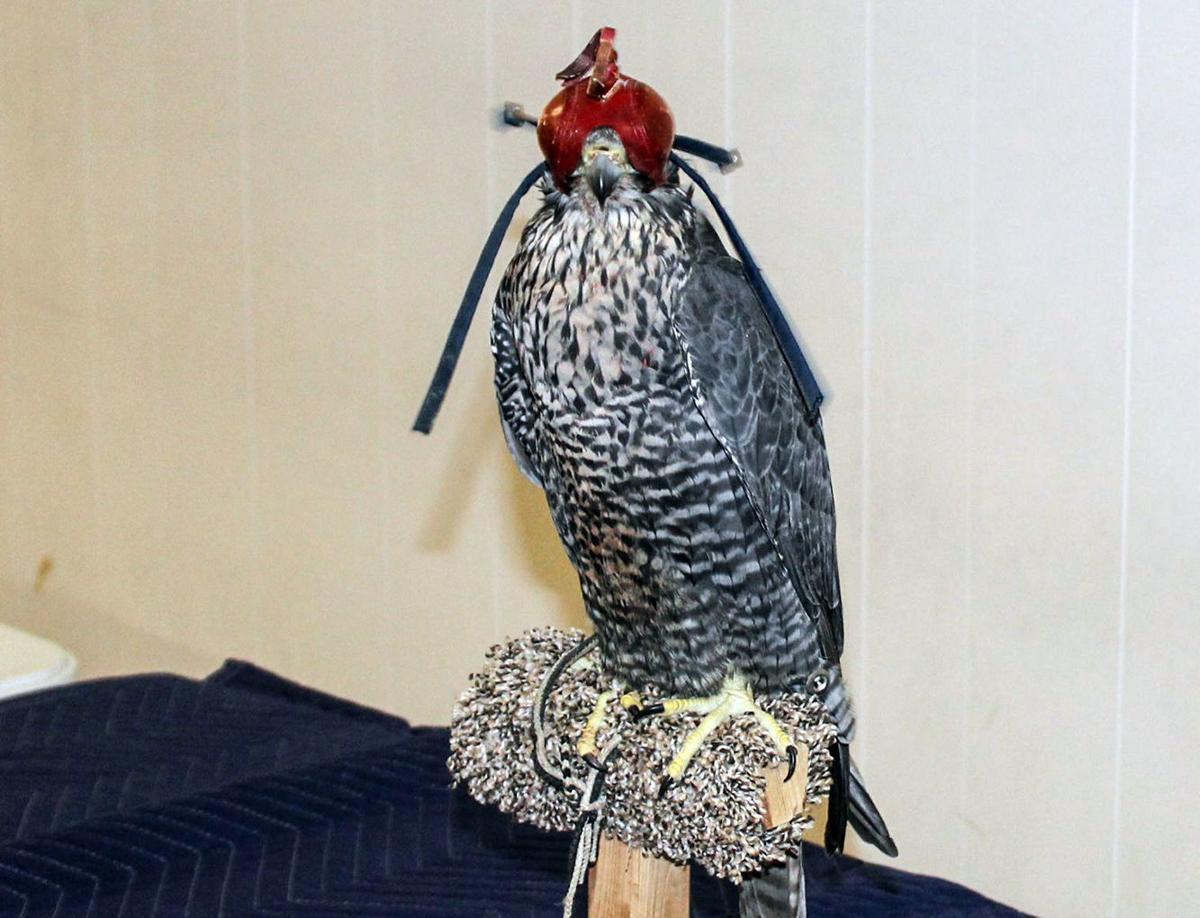 ROCKFORD — There are a lot of people who know the name Treyton Young as the fleet-footed running back for the Snake River High School Panthers football team, an all-state honoree a couple of years ago.

What people may not know is that Young is also a licensed falconer and has been for nearly five years. The word is getting out about the multi-talented senior who will be graduating this spring from Snake River.

On a recent morning, as part of his senior project at Snake River, Young was giving presentations to classes at Rockford Elementary School on falconry and the many different responsibilities there are when a person decides to become a falconer. Not only do you have to study and serve an apprenticeship in order to eventually take a test that allows you to be licensed, you must learn how to care for the birds and treat them properly because many of them are protected and some are even on the endangered species list.

That also is part of the responsibility of raising these birds and keeping them in captivity, you must become a guardian for the birds and even release them back into the wild.

This whole adventure of becoming a falconer began just over five years ago for Young and started with him capturing pigeons for a neighbor. He would go into the barn and when the pigeons were closed in and it was dark, it made them easy to catch. He would sell the pigeons to the neighbor and one day he was asked to accompany the neighbor when he went hunting with his falcon. It so excited Young at that age that he began to inquire about becoming a falconer himself.

That early venture has led Young to own over 60 pigeons himself, most of them homing pigeons. He also has a Harris Hawk, a parrot named Jake and a finch. He cares for all of them himself, a chore that can take up a lot of his spare time and that is something many young people have in short supply.

“This isn’t just a sometimes hobby,” Young said. “This takes you every day, morning and night, afternoons and days off. The birds’ homes have to be taken care of and cleaned and the birds need to be fed and you have to work to get the feed and the hawks and falcons have to be taken out so that they can hunt.”

All the while Young was talking and walking around his stage, he was addressing two classes of students from Rockford Elementary School and the 45 or so youngsters had their eyes glued to Young and the bird perched on his left hand and arm. This passing of information and knowledge to the young audience was the main part of the senior project, but it was also part of the youngsters’ studies of birds in their own classrooms as well. That process has been going for the better part of a couple of weeks and they were gaining information all the while.

Questions and answers were flowing between Young and his audience as they discussed the food of the pigeons, mainly grains of different types and need for them to also ingest small pebbles and stones which aids in the grinding up of the grains as part of the digestive process.

Along with fellow falconer and friend Kelly Smoot, there were four live hunters on display for the kids to see.

Smoot had brought a Prairie Falcon, a Goshawk and a Gry-Peregrin Falcon hybrid while Young had on display a Harris Hawk, one of the larger hawks in this area. All four of the birds had been trapped in the area and put into captivity when they were very young.

“One of the things about being a falconer is that you have to come up with a bird and the only way to get one is to buy them or to catch or trap them,” Young explained. “There are several types of traps to use and some of them you can even make yourself.”

Young held up a squarish board with some four or five inches of wire forming a box of sorts with some wild looking wires on the top. He explained that you could put your live bait inside the trap, either mice or pigeon, and as you drove around looking for a falcon or hawk to catch, toss it out into the field and the bird of prey would descend onto the trap, get tangled in the wires on top of the trap and you would then go and capture them.

“When you capture your first bird is when the work really begins,” Young said. “You have to build trust between the bird and yourself. You have to teach them how to hunt if they are really young and you have to trust them in turn to become your friend and yet keep some of their natural hunting instincts intact so that you can release them back into the wild if you choose to.”

Young also demonstrated several types of traps and other items that are tools of the trade, including where the birds are housed, and the various tethers, hoods and gloves used by the handlers to provide protection when handling the larger birds.

“All of this equipment helps the falconer in multiple ways,” Young said. “One of the things it does is create a job that creates cash flow to help the falconer with the cost of having a hobby like this. Gloves have to be made as do the braided tethers and leashes and the hoods. One of the best glove makers around is Mrs. Smoot, hers are the best you can buy.”

Mews were described as being the home for the birds of prey and it was pointed out that the windows had vertical bars because the birds could see them better and wouldn’t be trying to perch on them like they would a horizontal bar. Everything about the birds is done with a purpose to promote their life and protect them at all costs.

“These birds are very expensive and carry a lot of value to them,” Young said. “If you wanted to buy a Harris Hawk or peregrine falcon for instance, it might cost you as much as $1,500 and that doesn’t include any of the tools or housing for the bird. That is why so many are trapped and done so very carefully in order to not injure or harm the bird.”

There is also a big movement among falconers to help with the preservation of the birds of prey.

“When the numbers of peregrine falcons got very low, the falconers in Idaho got together and they helped to build the big display and venue in Boise to display the birds to the public,” Kelly Smoot said. “Since that was all put together a number of years ago, the birds of prey in Idaho have rebounded and the number released in the Boise area has gotten the birds taken off of the national endangered species list.”

It was also asked about keeping eagles, particularly bald eagles, in captivity.

“You can get a special license to capture eagles, but it usually is only granted if the bird is injured or in danger,” Young said. “You would also have to release the bird back into the wild when it had recovered sufficiently enough to fend for itself. It is very difficult to keep an eagle in captivity because of their size and the amount of food that they consume. These birds of prey eat their own weight in food every couple of days and it is hard to keep them hunting every day just for their own food.”

It was pointed out that in the wild, if a bird doesn’t make a kill on Monday, he goes hungry until Tuesday and if weather or conditions keep him from hunting, it puts them that much closer to starvation. The birds of prey have a very high metabolism that keeps them needing vast amounts of food to stay alive.

The last portion of the presentation talked about the dangers of feeding the birds the wrong kind of food. Everything is dangerous in the wild.

When a mouse is poisoned, for instance, and the bird of prey eats the mouse after it dies, it can also kill the bird of prey. Vast numbers of birds of prey were killed a number of years ago when an insecticide called DDT was widely used by farmers to kill off bugs and harmful insects. As those small insects died and were eaten by small animals and birds, it in turn killed them and as they were eaten by birds of prey, it killed them.

It is much better to use organic types of insecticides or traps to eliminate insects and rodents that can be harmful to the crops grown and be able to protect the birds of prey.