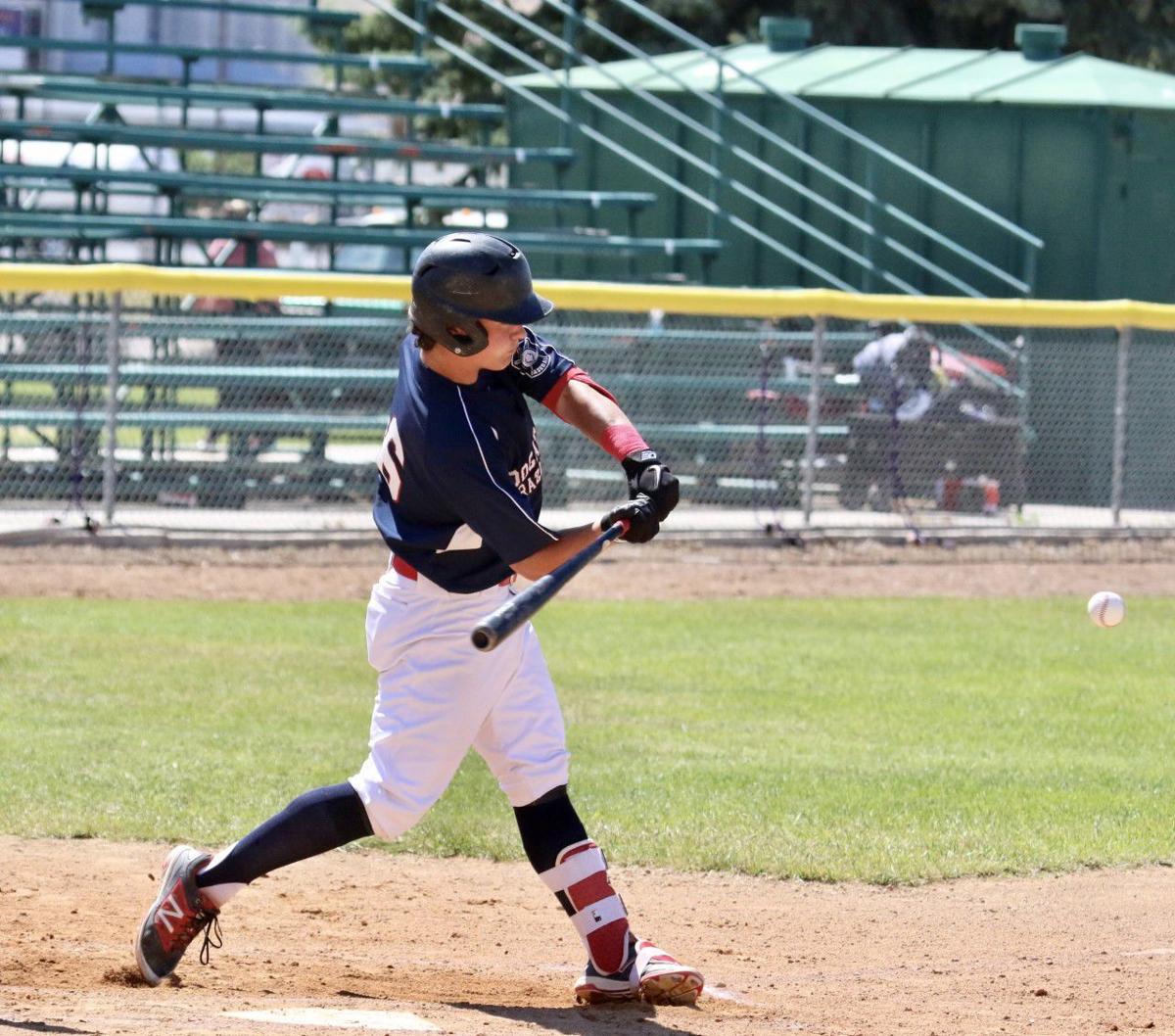 Aaron Kearns of the Pocatello Razorbacks swings at a pitch during a game against Skyline at Halliwell Park on Thursday. 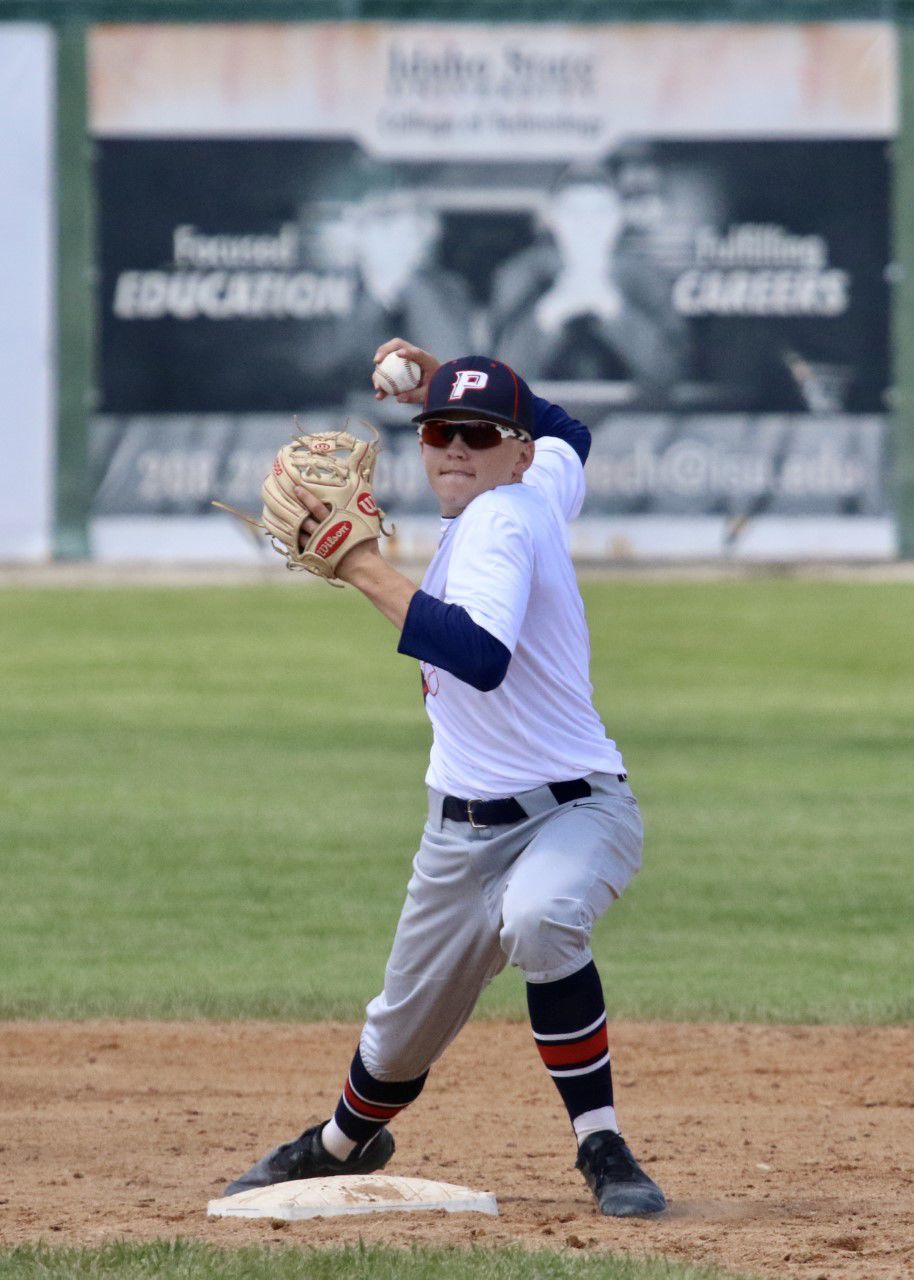 Pocatello Rebels second baseman Austin Hansen tries to turn a double play during a game against Shelley at Halliwell Park on Thursday.

Aaron Kearns of the Pocatello Razorbacks swings at a pitch during a game against Skyline at Halliwell Park on Thursday.

Pocatello Rebels second baseman Austin Hansen tries to turn a double play during a game against Shelley at Halliwell Park on Thursday.

Despite being delayed a day due to weather, the opening day of the Wood Bat Classic in Pocatello was a successful one for the Pocatello Rebels, whose live bats and efficient pitching helped them pick up wins over the Idaho Falls Tigers and Shelley in Legion baseball play.

The Pocatello Razorbacks also got off to a good start at the tournament, beating Skyline in their first game.

Austin Hansen tripled in the top of the second, driving in Tolman and knotting the game up at 1. The following inning, Ian Hershey reached on an error, then stole second and third bases during Kaden Knowles’ at bat. Knowles rewarded Hershey’s effort with a line-drive single to put the Rebels up 2-1.

Both offenses were quiet until the top of the fifth, when the Rebels exploded for five runs to go up 7-1. Knowles and Ethan Ellis each drove in a run, Foltz hit a two-run single, and another runner came home on a bases-loaded walk. The Rebels tacked on two more runs in the sixth to seal a 9-3 win.

In the Rebels’ second game of the day, against Shelley at Halliwell Park, there was still plenty of offense to be had, but Rebels coach Chris Seckel was especially impressed with his squad’s pitching and defense in their 7-0 shutout win.

“Alex Winn threw a seven-inning shutout with a great defense behind him,” Seckel said. “I have a young team this year, but they are playing good ball together so far.”

Hershey and Knowles each had two hits against Shelley, with Knowles and Hansen driving in two runs apiece.

The Razorbacks (4-1) also found success on Day 1 of the tournament, pouncing on the Skyline Grizzlies for eight runs in the second inning and cruising to a 13-4 win in five innings at Halliwell Park. Kobe Holt pitched three hitless innings to start the game, and six different Razorbacks drove in runs in the victory.

Scott Baker led the team with three RBIs, while Jett Anderson, Mason Fullmer and Colton Sneddon each had two. Luke Davis drove in a run and tacked on two stolen bases in the victory.

Razorbacks skipper Jason Jones was happy with his team’s performance, especially considering the challenges that come with hosting a tournament.

“These tournaments are tough when you host them,” Jones said. “We were here until midnight pumping water off the field, and were back here at 6:00 this morning.”

Skyline pushed across three runs in the fifth to make it 13-4, but Gunnar Trulson picked a runner off second with the bases loaded to end it.

Jones praised his team’s camaraderie and synergy early in the season which, like seemingly everything else in life, was considerably affected by the COVID-19 pandemic.

“We didn’t have any spring baseball,” Jones said. “Especially considering that, we had some pretty good team chemistry for it being this early in the season.”

As of press time, the Razorbacks were just kicking off their second game of the day against Declo. The Razorbacks will be back in action Friday morning at 10:30 against Sugar Salem, before playing again at 8:30 p.m. against Burley at Halliwell Field. The Rebels will compete in back-to-back affairs tomorrow at Halliwell Field, first tackling Thunder Ridge at 3:30 p.m., then taking on Soda Springs at 6:00 p.m.