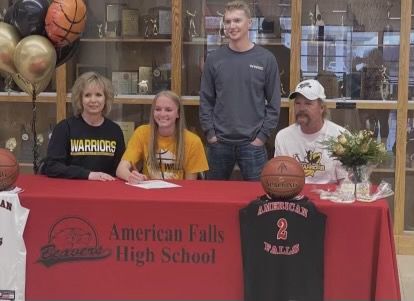 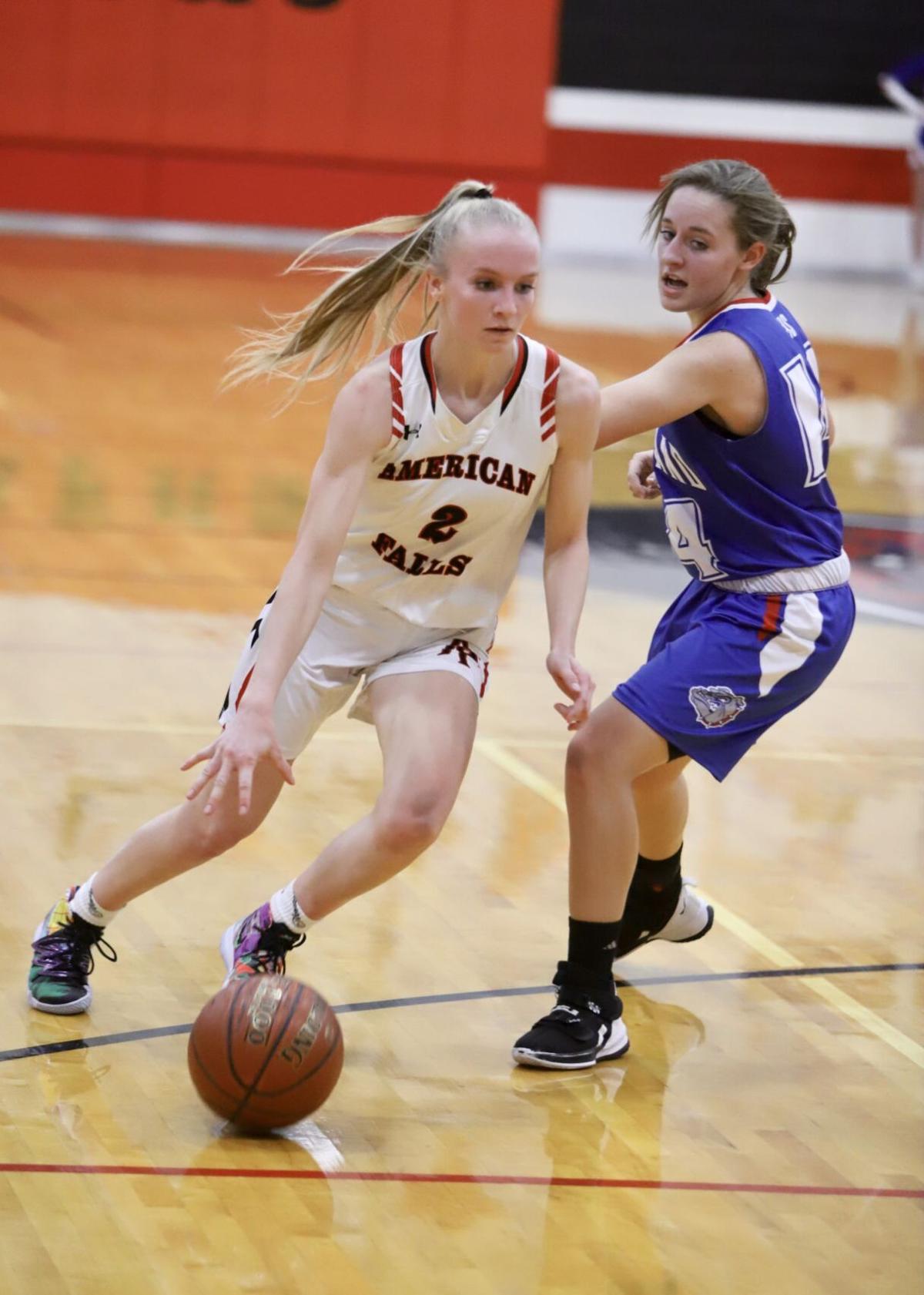 Playing against Rockland in February, McKenzie Long drives to the hoop. 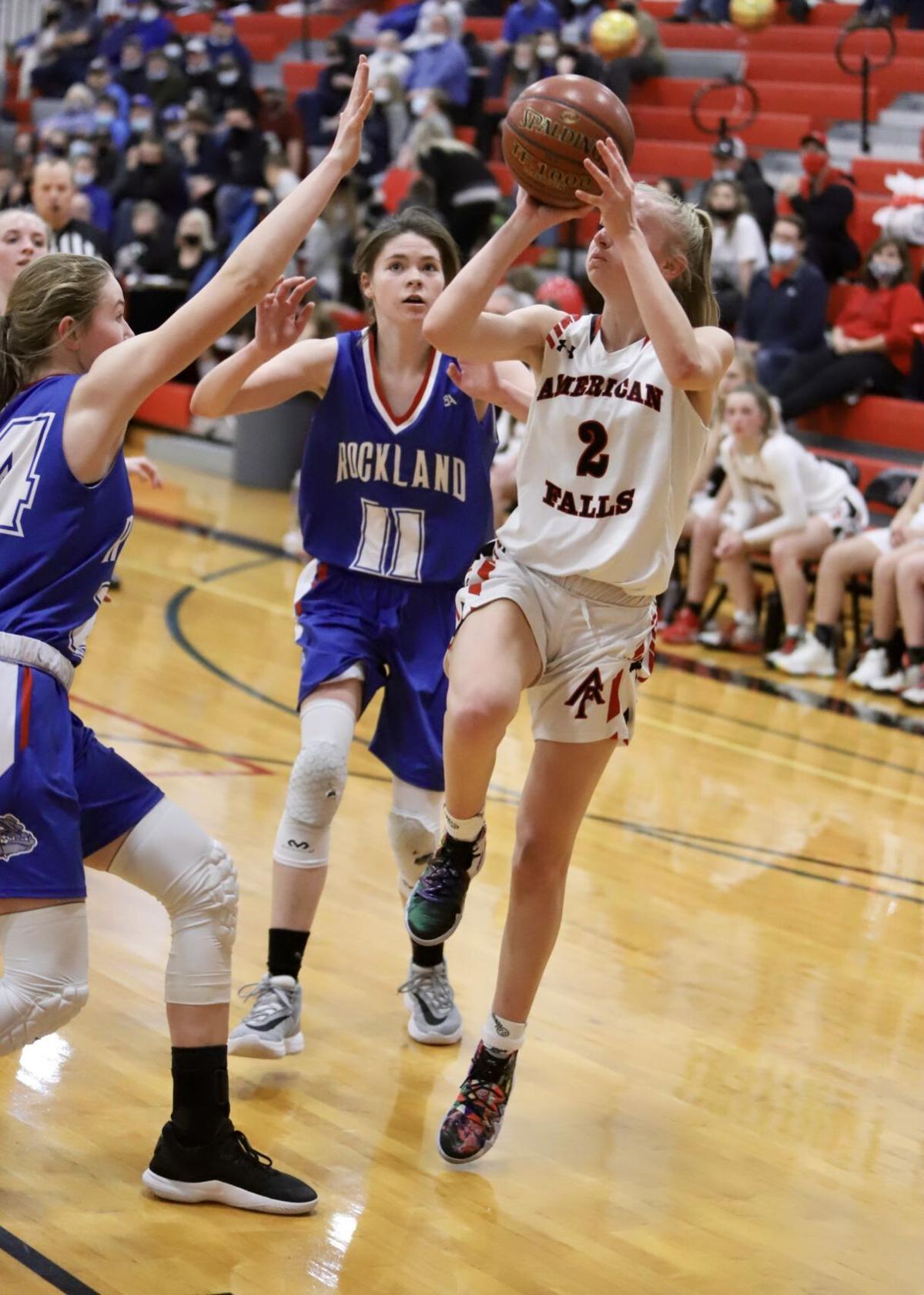 American Falls senior McKenzie Long throws up a floater against Rockland in February.

Playing against Rockland in February, McKenzie Long drives to the hoop.

American Falls senior McKenzie Long throws up a floater against Rockland in February.

Before McKenzie Long signed the papers, before she made it official she was headed to Walla Walla Community College to play basketball, before her childhood dream came true, the American Falls senior looked around the room to her supporters and thanked them.

Well, she tried to get out what she could before the tears started flowing.

“It’s just kind of a big moment for me because it’s something that I’ve wanted forever,” Long said. “That it actually came true was a little overwhelming and I started crying.”

The rush of emotion came during a point of reflection. Long signed her papers and thought of those little moments that propelled her to a college scholarship. All the long days in the gym. The days shooting alone. The early mornings when everyone else was sleeping.

And she also thought back to the first game of her sophomore year. American Falls was playing West Side and Long drove into traffic for a layup attempt. She collided with another body and felt her knee give out. About a week later, she learned it was a torn ACL. Her season was over.

“It was really tough for me because I wanted to be out there and help my team and just get better,” Long said. “It just helped me realize what I had and not take it for granted. You never know when it can be taken from you, so just work hard at it every practice.”

Two years later, the effects of the injury are minimized. She finished out a strong high school career and notched a college scholarship in the process. But the torn ACL added perspective to one of the greatest days of her life, which is why she cried during a celebration when most kids only smile.

“It’s like, ‘Wow. I did that. I came back from an injury.’ It’s awesome to feel that. I tore my ACL. I went through physical therapy,” Long said. “And I’m still doing pretty good when I play.”

Still, American Falls’ coach Stephen Grigg used to grow frustrated with his star guard. For all the talent Long had, for all her athletic ability and silky shooting stroke, Grigg hounded the senior about one big thing.

In the me-first era of basketball when isolation ball and 30-dribble possessions are the norm, Long was too humble, too willing to pass the ball. In an effort to ensure she wasn’t the ball-hogging shooter, Long almost became passive — opting for a dime instead of two points.

“We need you taking more shots,” Grigg told her. “I’ve seen you in the gym and I’ve worked with you throughout the summer, so I know you can shoot the ball. We want you taking those shots.”

Long eventually began pulling the trigger, shots started dropping and American Falls started winning. Though the Beavers went two-and-out in the district tournament, they won 14 regular-season games and finished with the same 2-2 district record as both Snake River and Marsh Valley.

If that doesn’t jump off the page, here’s how many wins the Beavers had managed in the six years before this season: One, zero, zero, one, two and 10 in 2019-20.

The credit for that turnaround can largely be given to Long, who scored almost 16 points per game on 43% shooting in her senior year while averaging 3.7 rebounds and 3.5 assists.

“She had all the intangibles. Good teammate, good rebounder, good rebounder,” Grigg said of Long. “She put in a lot of work. Total gym rat. Always taking the coaches’ keys to get extra work on a shooting machine.”

Added Grace coach Kyle Christensen: “We put out best defender on her and said, ‘Force her to her left.’ Four or five minutes later, our defender was like, ’She can go as strong left as she can right.’ She’s solid. Great shooter. Great all-around player.”

Walla Walla agreed. Long visited the southeastern Washington campus in early January and showcased her skills in a workout ran by the Warriors’ coaches. She ran through drills on Monday morning and was offered a scholarship Monday night.

Before she tore her ACL during that sophomore-season opener, Long had spent the summer nearly spending more time in the gym than her house. It was her way of showing how badly she wanted to play college basketball, that she was willing to make short-term sacrifices for, hopefully, long-term payoff.

On Monday, she got her reward.

“It’s so awesome to have everything come together, even after all of that,” Long said.