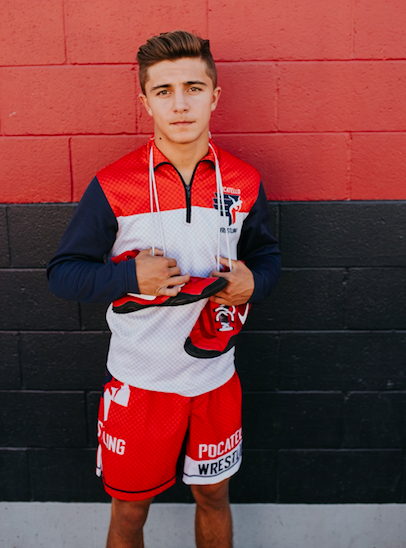 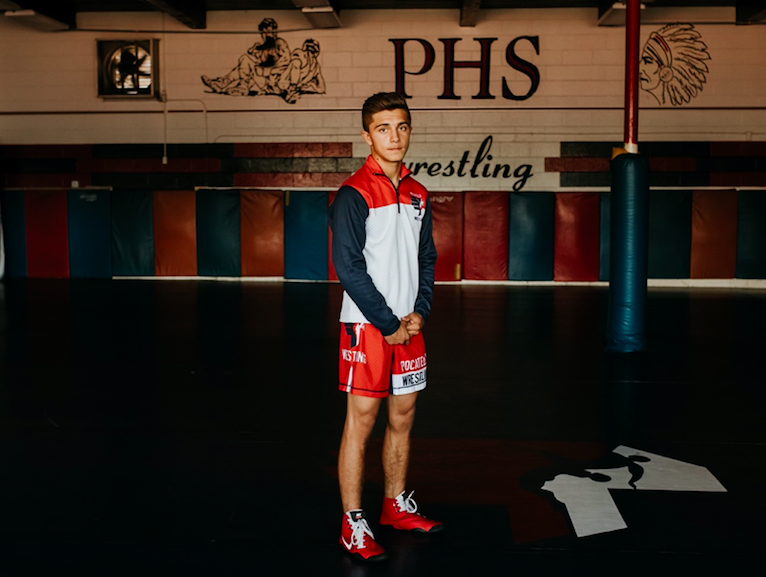 Pocatello senior Gabe Blessinger finished fourth at state in 2021 despite wrestling with a torn ACL. 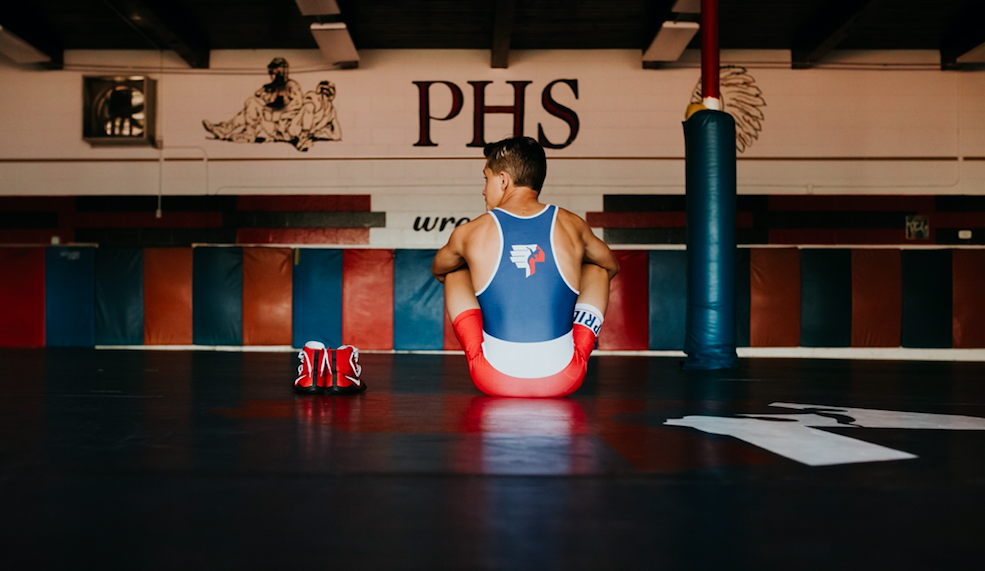 Gabe Blessinger will walk-on to the North Idaho College wrestling team after a four-year career at Pocatello.

Pocatello senior Gabe Blessinger finished fourth at state in 2021 despite wrestling with a torn ACL.

Gabe Blessinger will walk-on to the North Idaho College wrestling team after a four-year career at Pocatello.

Showing Gabe Blessinger a bracket only incites worry. It’s like playing a montage of plane crashes just after a first-time flyer pulls that polyester seatbelt across their lap. Wrestlers are supposed to be like sprinters, supposed to be these cocky specimens who could be paired against Superman and think they’re kryptonite. But Blessinger, a Poky wrestler, obsessively mapped out tournament brackets with a sort of inductive reasoning that rarely ended with him on top.

That made things challenging for Poky coach JB Plato. If the Pocatello wrestling coach could have blindfolded Blessinger until he stepped on the mat, Plato probably would have superglued a bandana over his senior's eyes. Since that’s not an option, he refrained from sharing tournament brackets with Blessinger – which worked for maybe a few hours or a day. Then Blessinger would track it down and fire off a text to his coach — something about how his seed was too low or how the guy he may face in the semis is a former state champ or how the guy he could face in the finals beat him before.

“Gabe is still a head case. Gabe is always comparing himself,” said Blessinger’s mom, Stephanie Webb. “In his head, before he went out there, he already had the match lost. But if he went out there and didn’t even look at the bracket or who the kid was, he’d be a completely different wrestler.”

Perhaps, but confidence is a tricky thing to nail down. It can stem from one’s mind or one’s results. You could be the most positive wrestler on planet Earth, but if each match ended with you on your back, at some point the confidence would be silly. Conversely, kids mowing through tournaments and still fielding self-doubt about their ability creates a whole new unrealistic view.

But Blessinger’s situation is different.

“Let’s start with freshman year,” he said, pausing for a second before he unloaded a mouthful.

Blessinger, who just announced he will walk on to the wrestling team at North Idaho College, suffered two concussions his freshman year, but still finished as the runner-up in his district tournament and earned a sixth-place medal in the 4A 113-pound state championships. He had a clean bill of health his sophomore season, but the bump up to 120 pounds placed him fifth at districta and off the state podium. That summer, an opponent tossed Blessinger and, instead of planting his leg and steadying himself, he helplessly fell to the mat with a torn ACL.

The 9- to 12-month recovery may as well have been a suggestion for Blessinger. He returned to competition seven months later, just before the district championships. He earned silver there and later placed fifth at the 4A 120-pound state championships.

His senior year was supposed to be the grand culmination of a turbulent career. Blessinger dreamed about rolling through the season, winning state and gleefully sharing his tales of agony like a man who fought a bear and lived. But that’s a fairytale, and Blessinger’s journey was absent of much pixie dust.

Instead, he again tore his ACL at a tournament during the fall of his senior season — which, given the timetable of ACL recovery, should have ended his final season. Blessinger’s new goal should have been to walk across the stage pain-free at his graduation in the spring, but that would have been too simple. Blessinger opted against surgery and decided he’d wrestle for a few months on a torn ACL.

A comparison for the pain of that situation is a tough one – maybe it would be like driving a car with your left foot while someone pounds your right knee with a mallet.

“It’s unbelievably hard,” Plato said. “It’s almost unimaginable for me, and I’ve been wrestling for 34 years.”

When healthy, Blessinger could force a collar tie to a shrug takedown, or hand fight, or go over and under his opponent for a lateral drop, all of which is wrestling mumbo-jumbo that means Blessinger had myriad ways to win matches. But those moves aren’t as easy on one leg, so this season Blessinger had to shoot from further away, attack his opponent’s legs and turn a hand-fighting duel to a battle on the mat.

That wasn’t the only battle for Blessinger, who also struggled with his resolve. Sometimes, one can only go through so many injuries before their spirit fades into the wind.

Plato remembers having a heart-to-heart with Blessinger back in January, after the diagnosis came down and physical therapy began. The Poky wrestling coach laid out a road map of recovery, creating an open dialogue of what Blessinger could and couldn’t do, what he could push through and what could make the injury worse.

Mondays are the toughest conditioning day in the Pocatello wrestling room, but since Blessinger couldn’t run sprints, he’d venture to the side and crank out 500 pullups and 1,000 crunches. He could still participate in some of the technique work but opted out of some moves, like a leg ride, that were only going to cause harm.

All of this may seem insane — and, in a way, it is. But wrestling is a crazy sport that draws crazy people like a magnet.

The Blessingers have been taking Gabe to wrestling tournaments for years now, so many that Webb lists a few off then stops.

“It all mushes together now,” she said.

Gabe’s younger sister is adamant that Gabe keeps wrestling, not because she enjoys the ambiance of a bunch of sweaty wrestlers in a gym but, rather, because it’s the only time the family has a ‘vacation.’ The five-person family will pack up and tug behind their fifth wheel, parking it in the lot of some random high school or gym. For the dozen hours the tournament takes, the camper is the Blessinger headquarters – a sort of refuge out of the gym and away from the screaming.

Webb knew nothing when her son started the sport at age 5. Over the last 13 years, other wrestling moms have taken her under their wing, infused her vocabulary with odd wrestling terms and an understanding for the wrestling landscape in the Northwest. The sport, for the Blessingers, has become a lifestyle to the point that if Blessinger is cutting weight, Webb refuses to eat, as well.

In this environment, wrestling with a torn ACL becomes slightly more realistic and slightly less of a pipe dream.

But still, working out the kinks of wrestling with a hammered ACL requires time on the mat, and more injuries kept coming. In Blessinger’s first practice back, his partner elbowed him in the eye, causing a gash of blood and a concussion. Two weeks later, another hit to the head resulted in another concussion. Blessinger entered the 4A District 5 Tournament having wrestled just seven matches. Luckily, the field was slim. Blessinger pinned Preston’s Dustin Pearce in under 20 seconds, then did the same to Tavin Rigby of Preston in 1:40 to earn a bid to state.

Then came state, and the release of the state bracket.

Plato didn’t tell his 120-pound senior the draw had been announced but, now a veteran, Blessinger was on the state’s website immediately. Again, the texts fluttered into his coach. Only this go-round, he seemed to shed all his self-doubt.