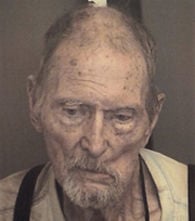 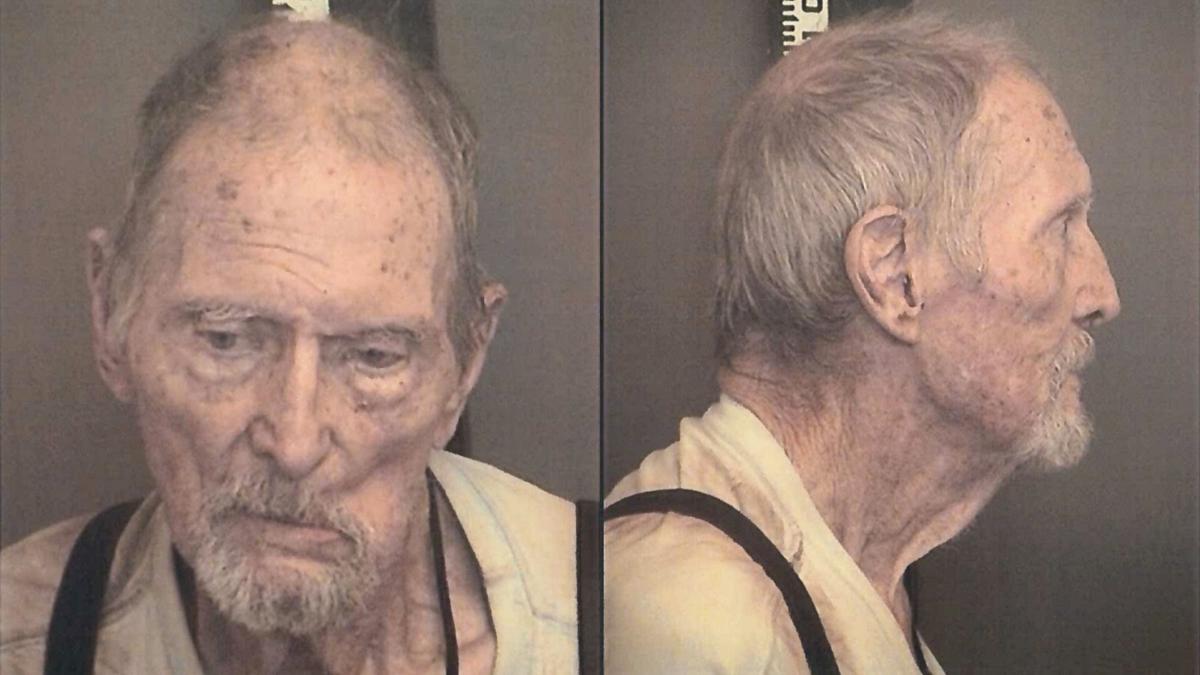 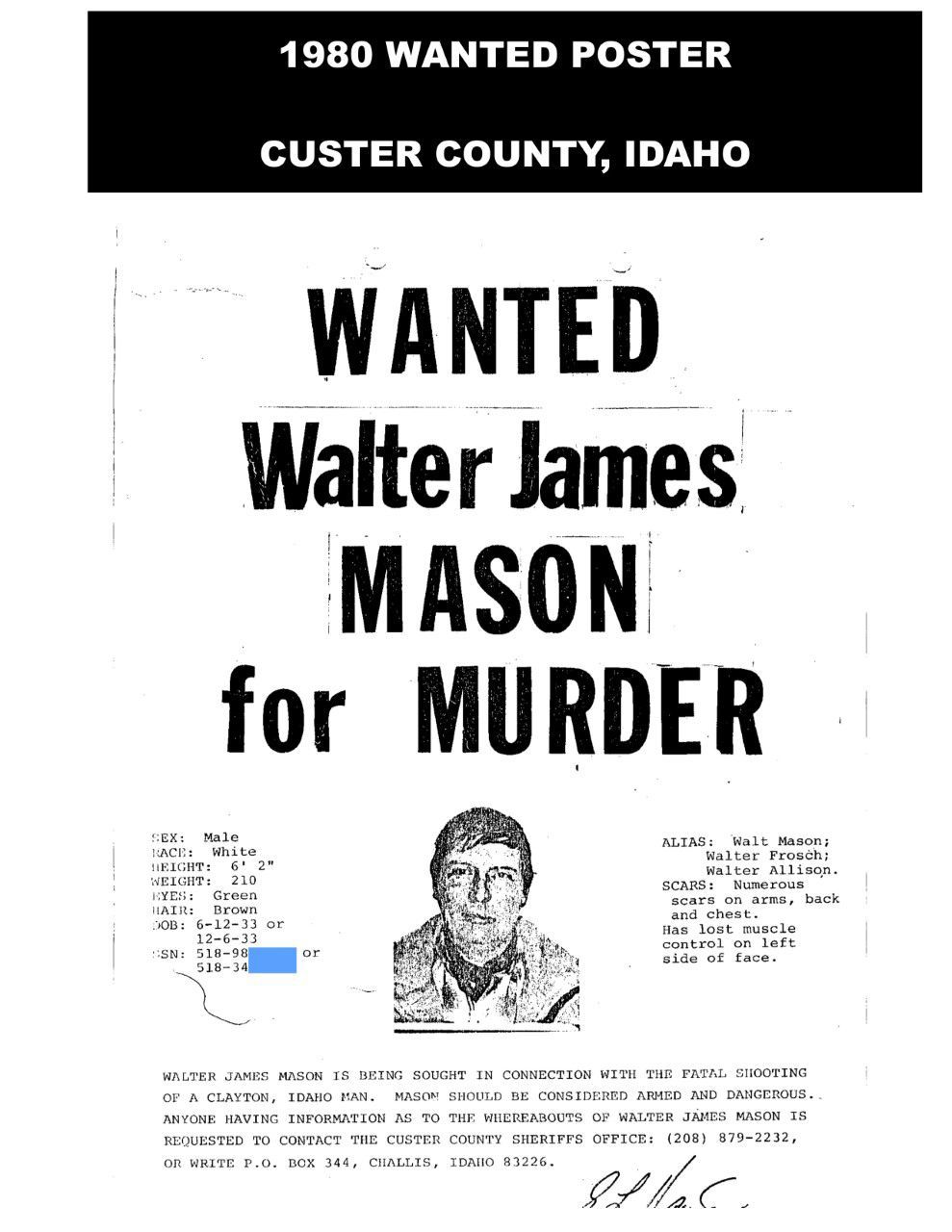 A 1980 wanted poster for Walter James Mason who was wanted in connection with the Sept. 22, 1980, shooting death of Clayton resident Daniel Woolley. Mason has been arrested.

An 86-year-old man wanted in connection with a murder that occurred nearly four decades ago in the sleepy mining town of Clayton was finally arrested this month, according to a Monday Custer County Sheriff’s Office news release.

Mason, a former resident of Clayton, located in central Idaho near Challis, was wanted on a first-degree murder charge in connection with the Sept. 22, 1980, shooting death of Clayton rancher, Daniel Mason Woolley, 52.

The family of Woolley told the Journal on Monday that they are in the process of preparing a statement regarding Mason’s arrest but declined to comment at this time.

Almost 40 years ago, Woolley, who grew up in the tiny, two-gas station, two-bar town of Clayton — a town with a population of seven as of the last census, and is nestled between the rocky mountains and Salmon River — was shot in the head with a .22-caliber pistol following a brawl outside the Sports Club bar, the bar owner who witnessed the incident, identified as Maggie in the December 1980 newspaper story, told the Post Register.

The incident began to unfold around 10 p.m. on Sept. 22, 1980, when a man, later identified as Mason, was observed verbally and then physically assaulting a woman believed to be his wife, the Post Register reported in December 1980.

Woolley, along with two other men from Kalispell, Montana — Robert Sweeney and his son, who was not named in the story — escorted Mason out of the bar and a four-man fracas ensued, the Post Register reported.

At one point during the altercation, Mason allegedly walked across the street and retrieved two pistols, a .22-caliber and .222-caliber, from his pickup truck, according to the Post Register story.

While outside on the steps leading into the bar, Mason allegedly shot Woolley once on the right side of his head, just above the ear, with the .22-caliber pistol, the Custer County Coroner’s Office told the Post Register in 1980. Mason then entered the bar and allegedly fired off five to six more rounds, striking Robert Sweeney once on his left shoulder, the Post Register reported.

Sweeney and his son then went after Mason and were able to subdue him long enough to take his guns away, which they threw behind the counter inside the bar, Maggie told the Post Register in 1980.

Somehow Mason was able to get away from Sweeney and his son. He then walked across the street and made a phone call at the Silver Bar, the Post Register reported. Prior to this month, Mason hadn’t been seen in Idaho for more than 40 years.

A 1980 wanted poster for Mason provided to the Idaho State Journal via Crystal Douglas of East Idaho Cold Cases Inc., described Mason as an armed and dangerous suspect with scars on his chest and arms. The wanted poster also said Mason went by the aliases Walter Frosch and Walter Allison and that he had lost muscle control to the left side of his face.

According to the 1980 Post Register story, Mason was a local rancher and hunting guide on the East Fork of the Salmon River. Authorities believed Mason fled the area on foot after the shooting, retreating into the back country area he was familiar with, the Post Register reported.

Authorities have not released how they learned Mason was living in Texas, nor why he was arrested. Mason’s identity was confirmed via fingerprints at the time of his arrest in Texas, the Custer County Sheriff’s Office said in its Monday press release.

Mason is currently incarcerated in the Madison County Jail in Rexburg with a $250,000 bond. He had his initial court appearance on Oct. 18, made via a video feed from jail, before 7th District Judge James Howard Barrett Jr.

The Custer County Sheriff’s Office said Mason has pleaded not guilty to the charge and has been appointed public defense attorney Dave Cannon to represent him.

If he’s convicted of the first-degree murder charge, Mason faces the death penalty.

”I have been anticipating an arrest in this case for quite some time and I am very glad for the victim’s family,” Douglas said. “I look forward to the justice process in Custer County as this case continues to unfold.”