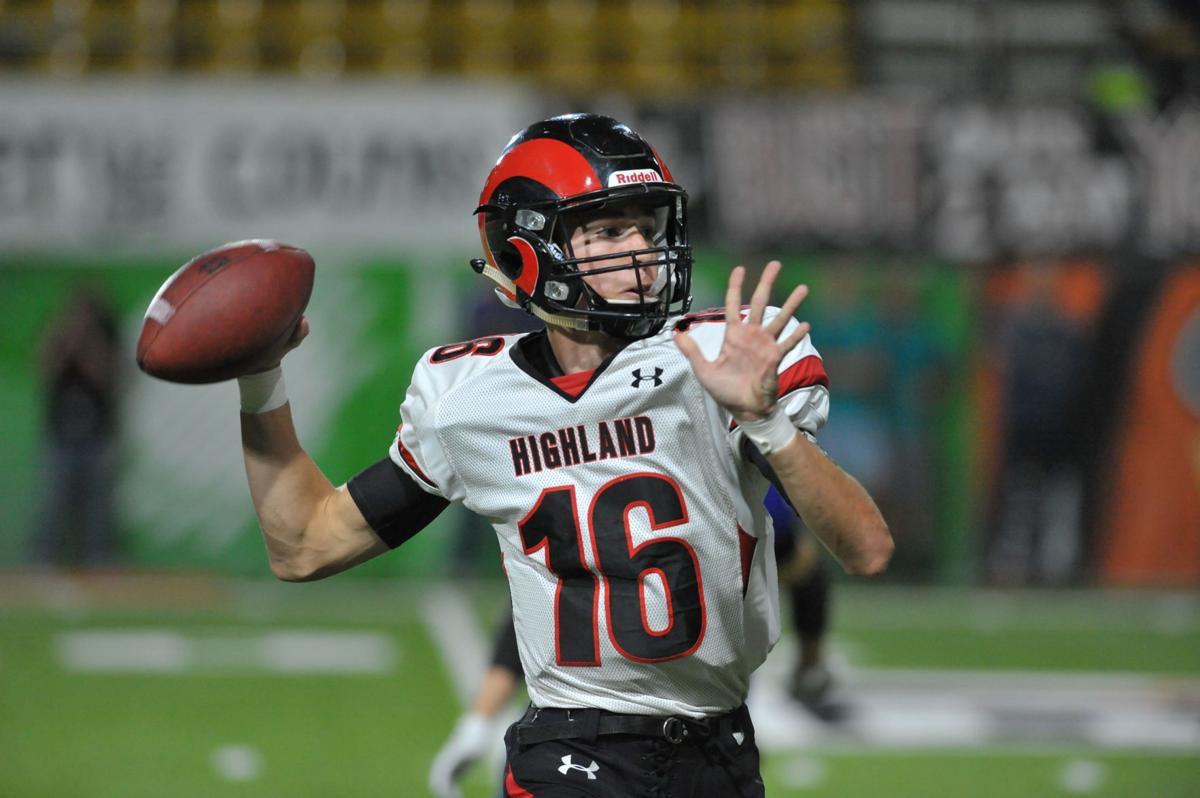 Highland’s Kobe Tracy attempts a pass against Century during the 2018 season. 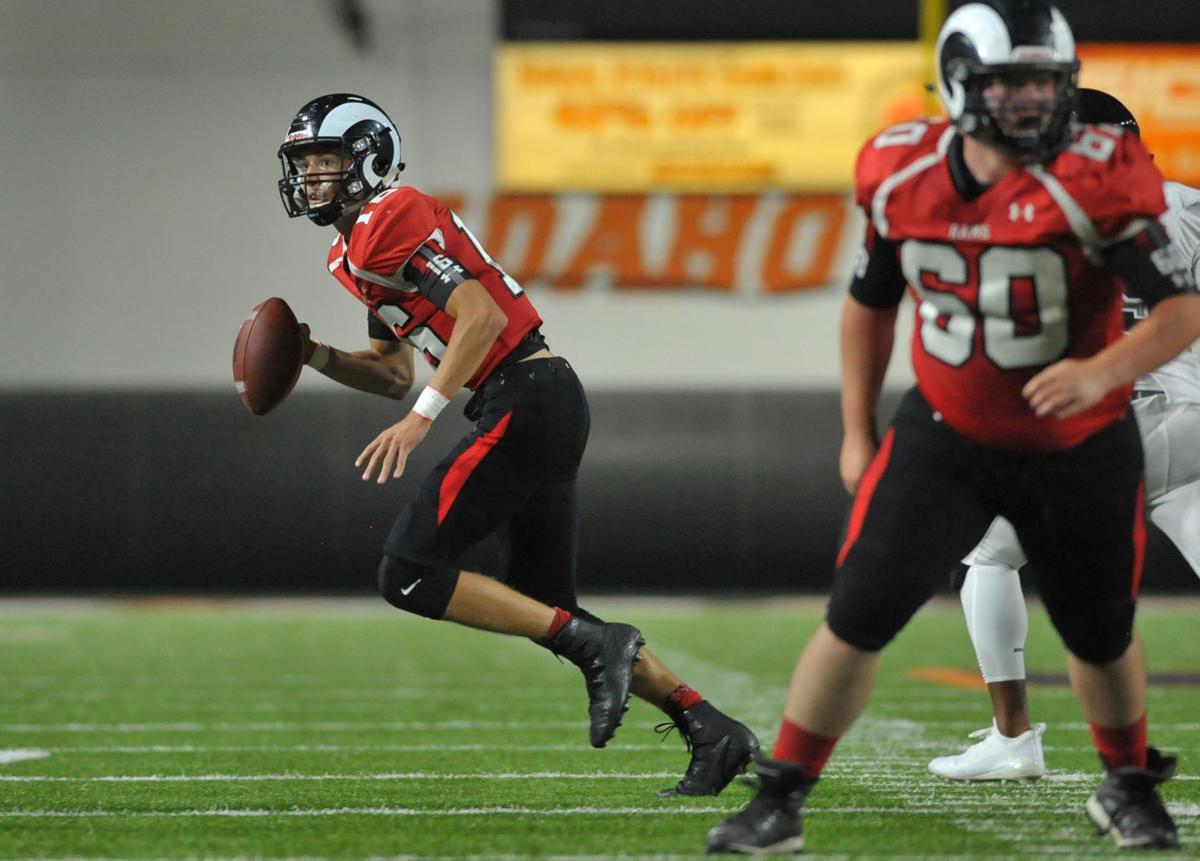 Highland's Kobe Tracy rolls out of the pocket during a game against Shadow Ridge (Nevada) at Holt Arena in 2018.

Highland's Kobe Tracy rolls out of the pocket during a game against Shadow Ridge (Nevada) at Holt Arena in 2018.

POCATELLO — Before the start of every practice, Kobe Tracy worked on screen passes.

The play was an integral part of the Rams’ offense, and the team devoted time this season to mastering the play. Working on the intricacies of Highland’s screen package was a priority for coach Gino Mariani and his starting quarterback.

The extra repetitions this season paid off as Tracy and the Rams weaponized the screen pass on the way to a 10-2 record and second-place finish at the 5A state playoffs. The screen started with Tracy, the team’s senior quarterback and 2018 Idaho State Journal All-Area Football Player of the Year.

The foundation of Tracy’s success this season started with the screen pass, but just how much of an asset was the screen game for the Rams? The Journal watched all 354 of Tracy’ passes this season, charting each throw and mapping out a clear picture of Tracy’s record-breaking season.

Here is a breakdown of how the screen, plus hitch, seam, out, in and crossing routes contributed to Tracy’s successful 2018 campaign.

Landon Demuzio was the linchpin of Highland’s screen game.

The senior running back dominated in open space, using his speed and quickness to leave defenders behind. Tracy took full advantage of his star running back’s abilities, throwing Demuzio 33 screen passes this season. The RB caught a team-high 29 screens for a team-high 242 yards and three scores.

Demuzio averaged 7.3 yards receiving per screen attempt this season, including 10 screen receptions of 10 yards or more. On average, Demuzio started 2.6 yards behind the line of scrimmage on his 29 screen receptions but still managed to accumulate positive yards. The senior had four screens notch negative yards and screens were 47 percent of Demuzio’s 61 receptions this season.

Demuzio contributed to Tracy completing 96 of 110 passes for 763 yards, five touchdowns and one interception on screens this season.

“When you get a kid like that with speed and quickness in space, he knew how to hit seams,” Mariani said. “The screen pass was awesome for him.”

Wide receiver Andrew VanSickle stepped into a leading role this season, and the screen package helped VanSickle finish the season with 71 receptions for 820 yards and nine touchdowns.

VanSickle, who is third in Rams’ history for single-season receptions, was option No. 2, generating 25 catches for 192 yards and one score on screen passes.

The Rams said VanSickle was the team’s sure-handed option at WR, and his numbers back that up. The senior was targeted 27 times on screen passes, averaging 7.1 yards per attempt on his 25 receptions. Two of his 25 catches went for negative yards.

“There is a lot of confidence to know that your check-down isn’t going to get blown up,” Tracy said of VanSickle. “He always gets yards.”

Running back Jesus Garcia was the third-best contributor to the screen this season, catching 18 of 19 attempts for 211 yards and one 32-yard touchdown. In 2018, six different Rams caught at least five screen passes from Tracy and 10 different Rams were targeted on screens by Tracy.

The Rams were surgical as a screen team because of Tracy’s patience, the Rams’ talented skill players and athletic offensive line. Without the O-line setting the play up, there is no success. The Rams’ top weapon on the offensive line in the screen game was senior left tackle Tanner Drury, the package’s unsung hero.

“We are determined to be a good screen team,” Mariani said. “Hitting that throw should be second-nature.”

VanSickle came into the season knowing what his role would be.

The 5-foot-9 receiver caught 12 passes for 87 yards in 2017 as a backup and spent the summer running routes and perfecting his hands, ready to be the Rams’ intermediate receiver. His vision came to fruition as VanSickle was Tracy’s go-to receiver on intermediate routes this season. The senior caught 17 out, nine hitch, six crossing, and five in routes, leading to 433 combined yards and five combined touchdowns.

“A lot of teams blitzed, so those quick routes were there,” VanSickle said. “Kobe trusted me for sure. We had a good relationship. He knew I’d catch it if he threw me the ball.”

VanSickle was Highland’s most successful first-down generator. The senior helped Highland secure a fresh set of downs on nine of his 17 receptions on out routes, five of his nine hitch routes, three of his six crossing routes and two of his five in routes.

VanSickle, who led the Rams with 87 targets this season, earned that role because of his reliability. The senior dropped four passes in 2018.

“His ability to get open and read defenses, run the correct choice route, was awesome,” Mariani said. “If you stuck it near him, he caught it. He was so dependable.”

The out was Tracy’s third-most productive route this season, tallying 467 yards, seven touchdowns and an interception percentage of .02. Only the screen and seam routes produced more yards and only the seam route tallied more touchdowns.

“Kobe had great ball placement,” Demuzio said. “He’d put the ball in the right spot, so we can turn away from the defense and get yards.”

Drake Hill’s production also came on the intermediate routes. The senior tight end caught 19 combined passes on in, out, hitch and crossing routes for 254 combined yards and two combined TDs.

Hill’s open-field ability on intermediate routes shined against Coeur d’Alene, when he caught a 5-yard hitch from Tracy and ran 75 yards to the end zone. The 80-yard score is the ninth-longest touchdown pass in Highland history.

“If he could catch and turn the corner, he’d get a lot of yards,” Mariani said. “He so fast as a straight-line runner.”

Tracy’s deep ball was a back-breaker for defenses in 2018.

The senior quarterback relied on the intermediate routes and the screen game to move the chains, but the seam/go route flipped the field.

Tracy threw 62 seams this season, connecting on 29 of them for 697 yards, 10 touchdowns, and two interceptions. Tracy averaged 18.2 air yards per attempt on his 29 completions, while his his 33 incompletions averaged 26.6 air yards per attempt. Air yards measure for the distance a pass travels in the air from the time it crosses the line of scrimmage until it is caught.

The seam route wasn’t the team’s most effective route combination, but it produced highlight-reel plays that changed games.

When the Rams were trailing Madison 14-7 in the third quarter of a crucial game for the 5A District 5-6 standings, Tracy uncorked a 41-yard touchdown to VanSickle on a seam route, with the help of a fake screen to Alex Orr. The ball traveled 37 yards in the air, leading VanSickle right into the end zone. The play tied the game and flipped the script, helping the Rams win and stay alive in the district title race.

Tracy’s success on the deep ball continued in the Rams’ conference title-clinching win against Rigby. Tracy threw four touchdowns, including a 32-yard score to Austin Richards and a 33-yard score to Demuzio. Richards caught his touchdown 5 yards deep in the end zone after Tracy rolled to the right side of the field to avoid pressure.

On Demuzio’s 33-yard score, Tracy stood in a clean pocket and hurled a pass 29 yards into the air toward his senior running back, who beat his defender down the right sideline.

Tracy’s pass was placed so that neither the trailing defender or the safety coming over to help had a play on the ball.

“He threw some great deep balls,” Mariani said. “There were some in the latter half where he hit some perfect throws.”

The big-play ability presented by the seam route helped the Rams highlight their speed and precision. Richards, one of the top route-runners on the team, was targeted 12 times on go routes, the second-most on the squad.

Richards was a deep-threat receiver for the Rams, catching four seam passes for 69 yards and two scores. Orr was another deep threat, catching two of his seven targets on go routes for 100 yards and one touchdown.

“Both have above-average speed,” Mariani said of the receivers. “I knew going in that if they ran crisp routes, they would get open. They could use their bodies to protect the ball. It was natural for them.”

Tracy blossomed into a record-setting quarterback for the Rams. His final season was a contrast from his first season as a starter in 2017, when he was a game manager who relied on his overwhelming defense. In 2018, Tracy was the playmaker, leading to a first-team All-Idaho selection and a district MVP nod.

Tracy’s winning pedigree is established, and now he’s preparing to move onto the next step: college football. Tracy has offers from Division II Southwest Minnesota State and NAIA’s Carroll College. Wherever he goes, Tracy will bring his hyper-efficient playstyle with him.

“He is so confident,” VanSickle said. “He was a totally different player this year. I’m proud of him.”

Gino Mariani led Highland back to the state’s biggest stage in 2018.