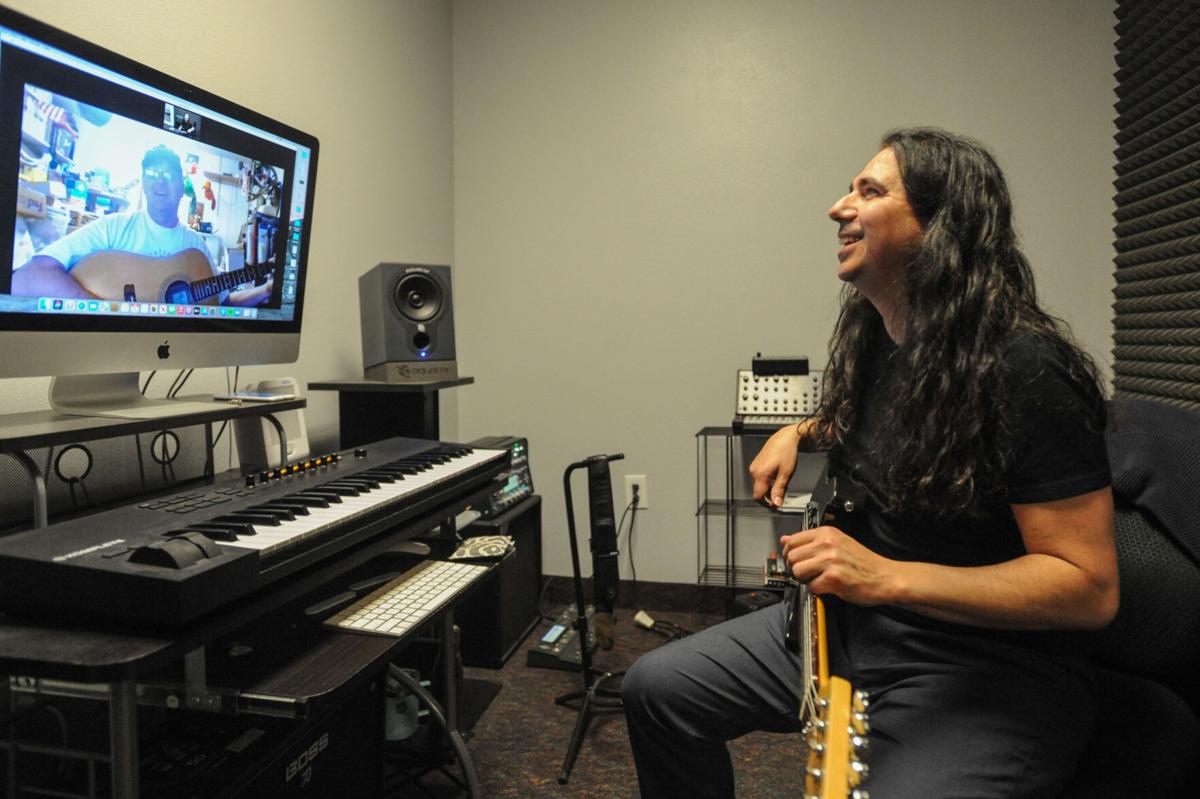 Darryl Davidson, shown on the monitor, takes an online guitar class with Craig Green at Chesbro Music on Friday, April 16, 2021. 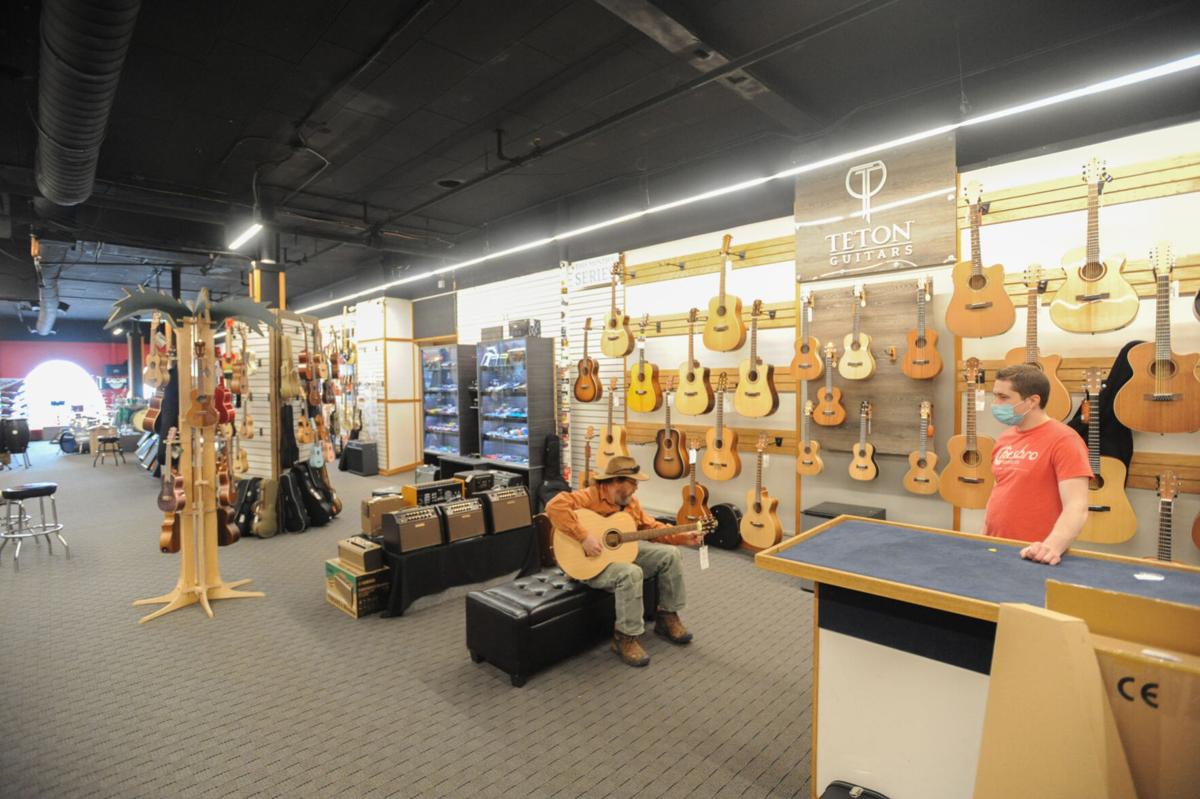 Matthew Hosley checks out a guitar at Chesbro Music on Friday, April 16, 2021. 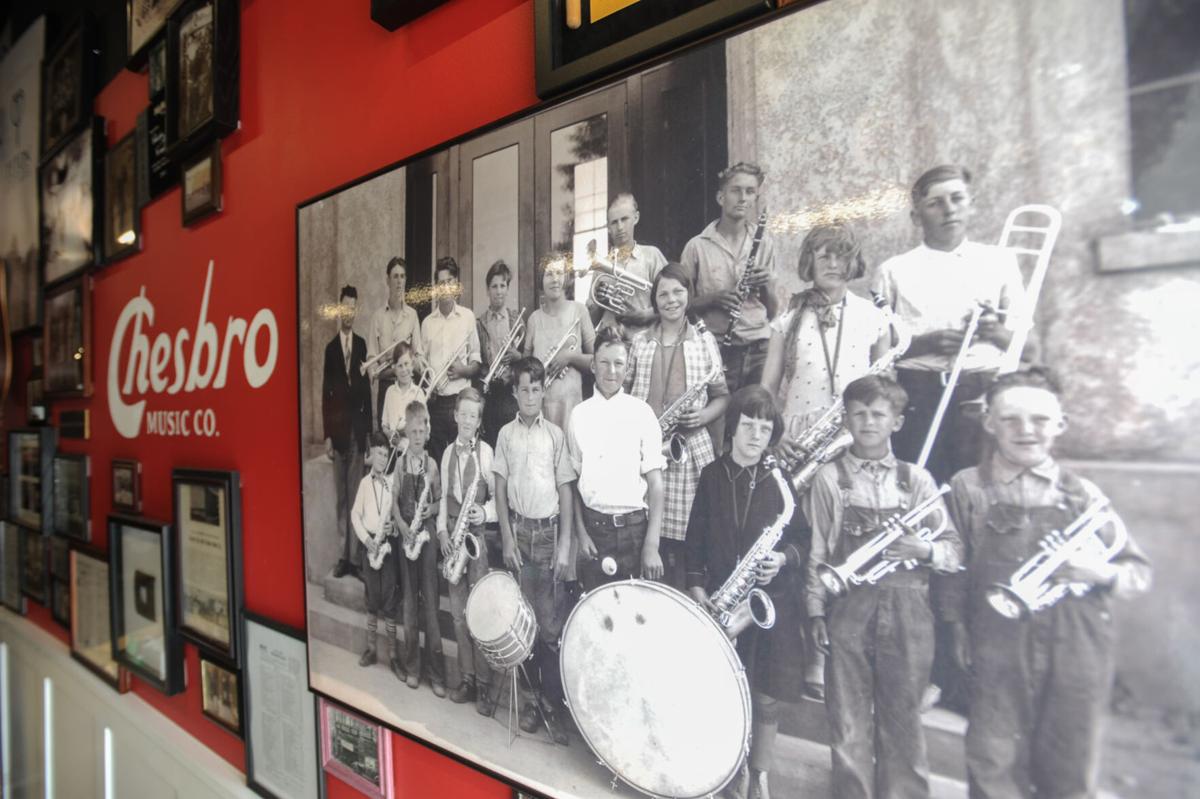 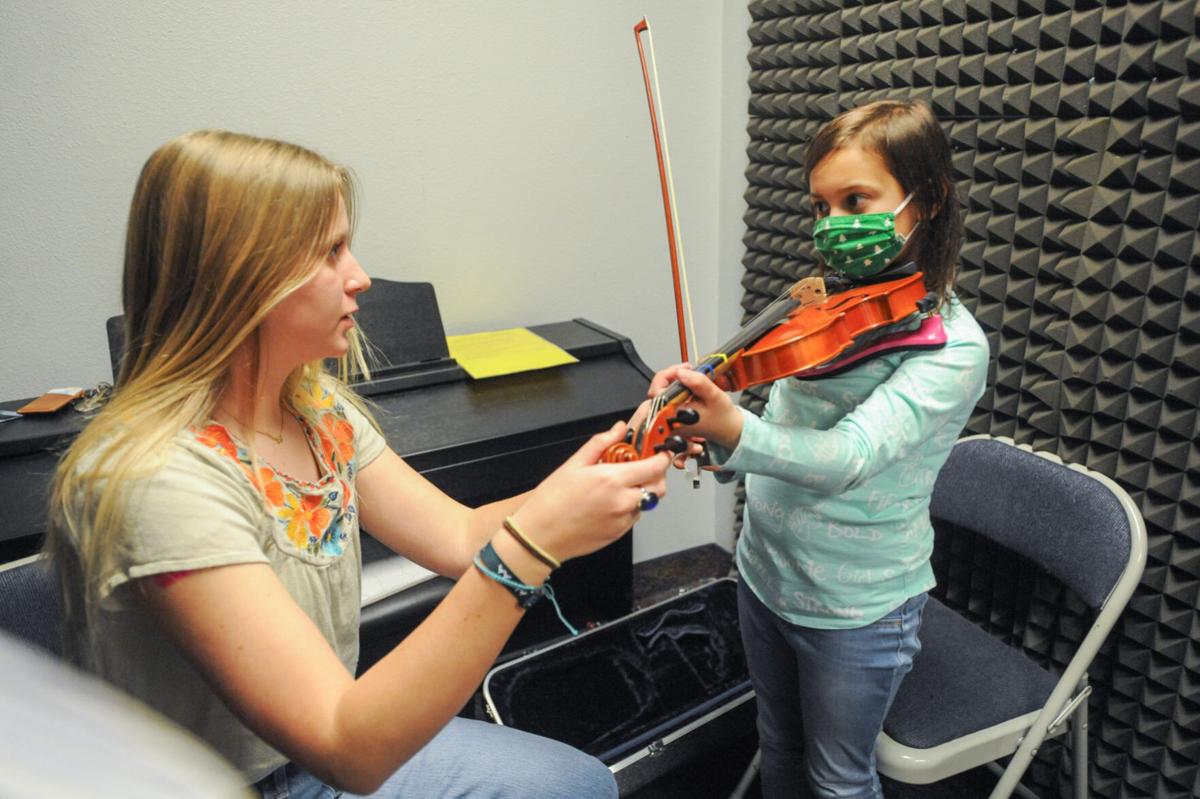 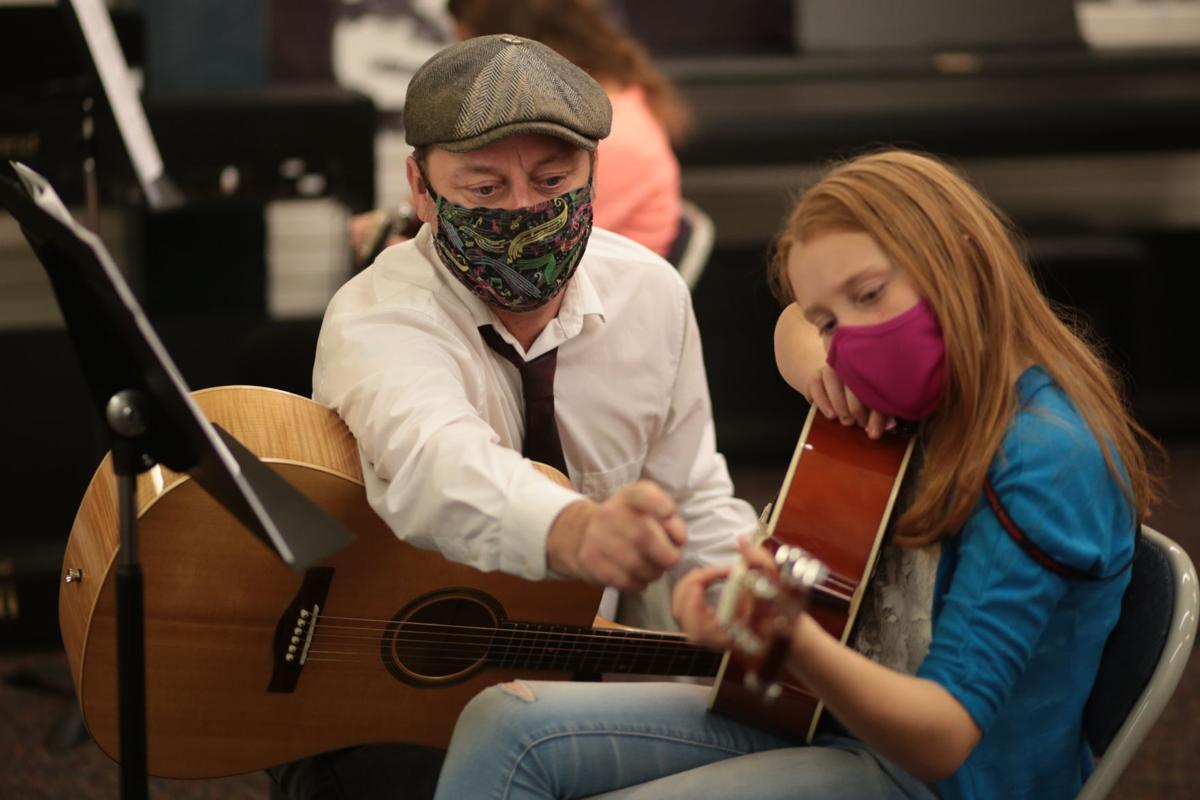 Freddy Gildersleeve helps a student with her chords at Chesbro Music Company on Tuesday, Oct. 21, 2020. 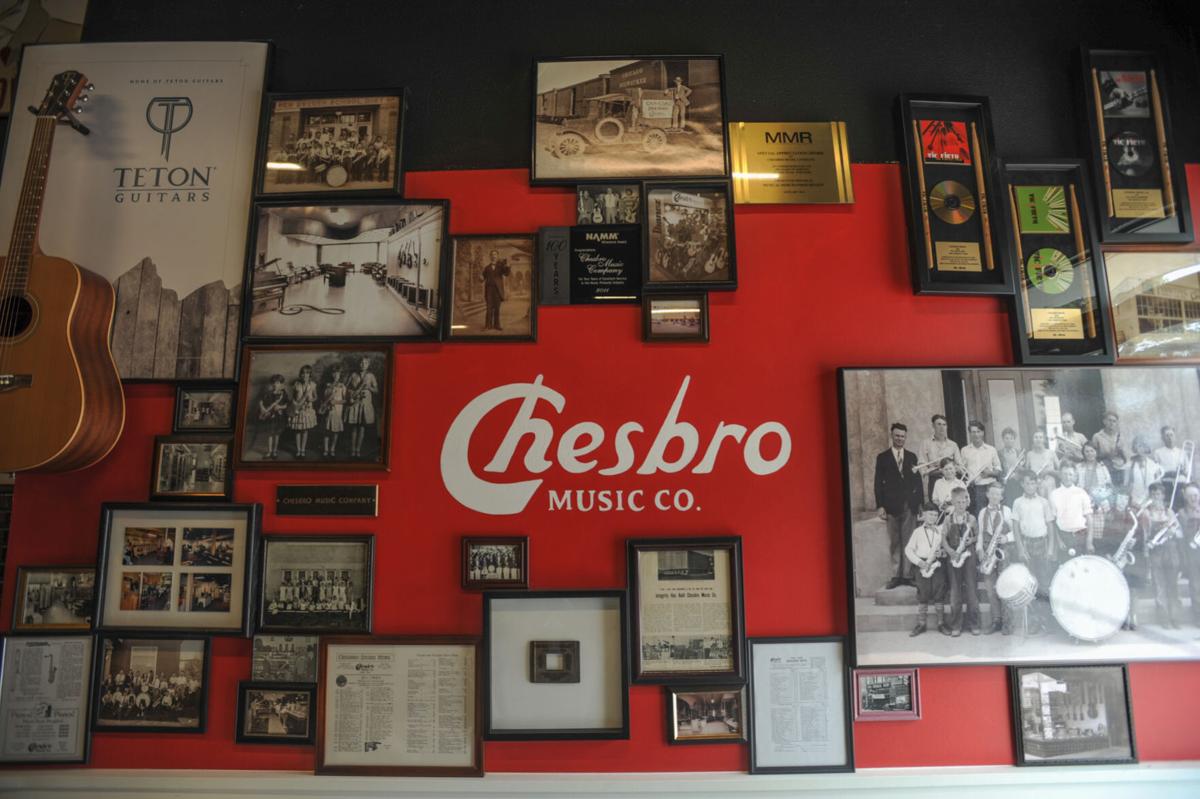 Darryl Davidson, shown on the monitor, takes an online guitar class with Craig Green at Chesbro Music on Friday, April 16, 2021.

Matthew Hosley checks out a guitar at Chesbro Music on Friday, April 16, 2021.

IDAHO FALLS — In the 110 years of business that the Idaho Falls-based Chesbro Music Company has navigated, 2020 proved to be not only the most challenging but, in the end, arguably the most fruitful for family-focused business.

Stahn, the great-granddaughter of founder Horace Chesbro, said the COVID-19 pandemic “was unbelievable.”

“We wanted to take care of our students, our staff, our customers,” Stahn said, adding that the spread of the coronavirus started impacting its manufacturers in Asia as early as January 2020. “We were making so many decisions — big decisions that were affecting a lot of people connected with our company.”

Stahn supported the state’s response to the pandemic but acknowledged that Chesbro, like so many other local businesses, worried about what it meant to close their business's doors for weeks at a time.

But, like all businesses that survive and even thrive for decades on end, Chesbro has weathered hardships throughout its history. Horace Chesbro founded the business in 1911 after leaving Seattle for the Rocky Mountains. The family and the business have endured world wars, the Great Depression and two pandemics. It has also dealt with personal tragedies, including a plane crash that killed Stahn’s grandfather, Henry Chesbro, who had taken the reins of the business after Horace’s death just three years prior.

Stahn’s mother, Joan Chesbro, was left to run the business as a young woman in the early 1950s. The June 1953 plane crash in California that killed Henry Chesbro also took the lives Joan's mother, Mary Jane Chesbro, and Joan's only brother, Paul Chesbro. Joan Chesbro left her management training position with Wells Fargo bank — which she had taken just after her graduation from Stanford University at age 21 — to come back to Idaho Falls to run the business alongside her grandmother, Ella, who was in her 70s at that time.

“The industry gave her six months to fail,” said Stahn, who started helping at Chesbro at the tender age of 8.

Stahn eventually would run the company with her sister Vanetta Griggs Wilson until Wilson’s death in 2013.

As the world started slowly coming up for air after COVID-19 shutdowns last year, Chesbro peered out over the landscape wondering, like many, how would this pandemic play out?

“We discovered that while people were home, they were discovering or rediscovering music,” Stahn said.

And it was here in that moment that Chesbro shifted with the times, like it always had in the face of adversity.

“The best part of the pandemic has been learning how to do things in different ways,” Stahn said.

Music is a universal language and Chesbro embodies that axiom.

Susan Christensen, who has taught music in public schools for almost 30 years and was named the 2018 Chesbro Music Teacher of the Year as a teacher at Teton Middle School in Driggs, credited the company for making music accessible to generations of students.

“Earlier on in my career, there were some stores who were not willing to rent to folks who didn’t have papers,” Christensen said.

She continued, “Gary Christensen (no relation) was the manager of the Chesbro store in Rexburg back in the day. He always said if a student was willing to pay to rent an instrument, then they would get an instrument. Chesbro refused the racist narrative that you needed papers to make music and the legacy of that access is found in the generations of families that still share their instruments handed down from sibling to sibling, classmate to classmate.

“This valley is full of music and Chesbro owns so much of that credit.”

Christensen said students would come to school with sandwich baggies full of all the coins they could find so they could rent an instrument, and Chesbro would work with everyone to make sure they could access musical instruments.

The same standard was applied when the pandemic reached East Idaho. Chris Kasper is the retail sales manager for Chesbro. When schools were not able to offer music lessons in COVID-safe environments, Kasper hired music educators to teach free lessons to any student who wanted them and hosted these lessons at the Idaho Falls store, which has a large space that can safely accommodate teachers and students.

“I put the word out about the free lessons and it went crazy,” Kasper said. “And we didn’t limit the lessons to just band and orchestra. We had kids signing up for guitar, ukulele, drums, bass and piano. The teachers were having a ball and the kids were having a blast.”

Kasper is averaging 85 students who show up for 35- to 45-minute classes twice a week. He said this is just one example of why the company remains successful.

“Tana’s ability to trust employees to be creative on behalf of the greater good of the business is unique,” he said.

“To hear these kids outside of my office is just wonderful,” Stahn said of the lessons. “Our bottom line has always been to support music education. We were Facetiming with families for recitals and giving grandparents an opportunity to watch their grandchildren perform in a new way that was safe during the pandemic. It’s those new ideas that I hope will continue.”

The company continues to carry on the family tradition with Stahn’s daughter JennieLee, a fifth-generation family member, currently working as her mother’s assistant.

Stahn’s brother Scott Griggs serves as a board member and her husband, Dan, retired in 2011 after working for Chesbro for 27 years. Dan Stahn died from COVID-19 in December 2020.

In recent years, Chesbro has worked to expand its wholesale distribution trademarks to include their own Teton Guitars, Tanara Guitars, CMC Percussion and Future Primitive (musical jewelry replicas).

In 2019, Chesbro purchased trademarks from an Indiana-based company that broadened its nationwide reach to include banjos, ukuleles and audio and technical trademarks. Chesbro also opened a sales office at the Indiana site, acquiring the employees of the former company as well.

“The diversity of instruments and using various distribution channels of what we do has not changed in over 100 years,” Stahn said. “It’s held us well.”

The Chesbro website says that when Horace Chesbro and his wife, Ella, moved to the Idaho Falls area in 1911, "he brought with him these ideals: Hold yourself accountable. Foster music in others. Give back to the community."

Generations later, his descendants continue to uphold those ideals.

“I have amazing employees around me that care about customers, students and music and who care about carrying on the traditions,” Stahn said. “When I look back on the changes, my grandfather and great-grandfather would be amazed.”