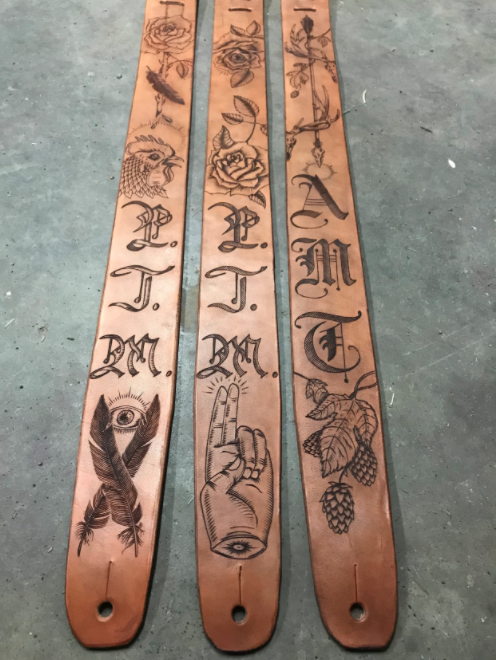 Pictured are some of the belts Ryder Evan Robison makes as part of his custom leather business, RER STUDIO. 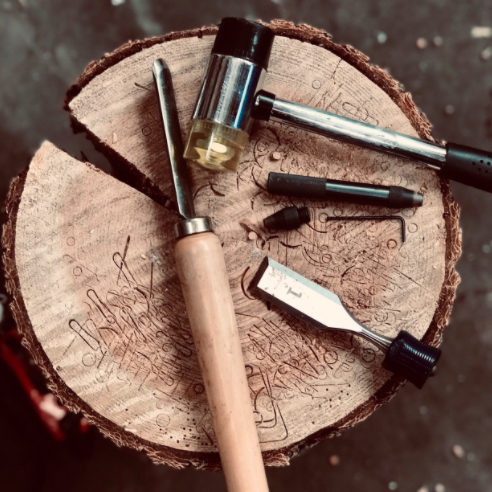 Pictured are some of the tools Ryder Evan Robison uses in his custom leather business, RER STUDIO.

Pictured are some of the belts Ryder Evan Robison makes as part of his custom leather business, RER STUDIO.

Pictured are some of the tools Ryder Evan Robison uses in his custom leather business, RER STUDIO.

A St. Anthony man who grew up drawing and later earned an art degree is working as a handcrafted leather goods artist.

But starving artist he is not, said Ryder Evan Robison, who created his RER STUDIO that specializes in leather goods.

“I’m a very blue-collar artist. I work with my hands,” he said.

At his studio, Robison makes everything from guitar straps to belts to rifle slings.

“I work with clients and fully customize for them,” he said.

Robison comes up with a drawing that clients can consider.

“My tagline is ‘handmade to tell your story,’” he said. “That way it’s something that is really unique and is just yours. It’s made just for you. The craftsmanship behind the leather goods is priority, so eventually you can hand that down to your kid. I still have my grandfather’s belt.”

The leather isn’t just something pretty to hang on a wall but is instead something Robison’s clients can use every day, he said.

“It’s utilitarian,"Robison said. "I just finished a rifle sling that has a muskox and the Wu-Tang Clan hip-hop group out of New York on it. (The client) lives in Alaska. He hunts muskox and wanted those things together.”

Robison lived in New York before moving to Idaho. Once here, a good friend of Robison’s who worked for Abercrombie & Fitch kept in touch with Robison. The company reached out to Robison as it was going through a rebrand of reconnecting with its heritage.

“They started as a hunting goods outfitter back in 1812. Now they make more fashionable clothing," he said. "They took my artwork paintings that were fluid acrylic paintings on watercolor paper and put them on T-shirts and sweatshirts. Some of the line work from the illustrations we turned into leather wallets and leather journal covers."

“It was great," he said. "They did a limited run of everything. Everything sold out pretty quick."

At one time, Robison did illustrative work and sold paintings throughout New York and Europe. He found gallery work not to his liking and instead switched to occasionally creating paintings for individual clients.

“I’m actually working on one right now for a client in California,” he said.

A Navy brat, Robison was born in Oslo, Norway, and spent the majority of his childhood sketching as his family moved around.

“Ever since I could hold a pencil or crayon, I’ve been drawing things," he said. "My mom still has the first painting I did when I was 5 years old."

Robison’s family eventually moved to Denver where he attended Rocky Mountain College of Art and Design. He later enrolled at the University of Colorado Boulder where he earned a Bachelor of Fine Arts degree with an emphasis in painting and photography.

From Denver, Robison moved to New York where he lived for 10 years. There he worked as a musician but left the band VAUX to do his leatherwork full time. The 2008 recession put an end to that after he lost all of his clients. Robison paid the bills by working full time as a bartender.

About seven years ago, he and his wife, Ainsley McWha, a photographer and writer, visited St. Anthony. The couple opted to stay.

Robison's mother was from St. Anthony, and he had visited frequently while growing up.

Robison supplements his family’s income by working full time at the South Fremont Fire Protection District. He also volunteers there as a firefighter.

“My grandfather was on the fire department that I’m on as well. That’s pretty awesome actually,” he said.

Robison never aspired to be a firefighter, but after getting to know those at the fire department, he opted to join as well.

“I get to help our community quite a bit," he said. "We get all sorts of calls from extricating victims out of vehicle accidents to house fires and brush fires and gas leaks and all sorts of stuff. I like being able to serve the community. It’s a way I can give back. It’s a lot of fun. I have a really good crew that I get to work with. I’m pretty lucky."

Robison is also lucky that he works one week on and one week off, thus allowing him the time to focus on his leather artwork business. It feels wonderful whenever anyone buys from him.

“It’s a huge compliment when other people believe in you and what you do,” he said.

For anyone interested in starting their own business, Robison encourages them to do something they’re passionate about.

“Find something you really, truly enjoy making or doing," he said. "Don’t quit your day job just yet. There’s plenty of time. If you’re passionate about something, you’ll make time to do it."

Eventually, if your full-time work is causing your business to lose money, it may be time to start doing that full time instead, Robison said.

“If your day job is getting in the way, and you’re losing money, that would be a good indication that maybe it’s time," he said. "I have bigger hopes and ambitions on what my company will do. I’m planning and trying to be as strategic as I can."