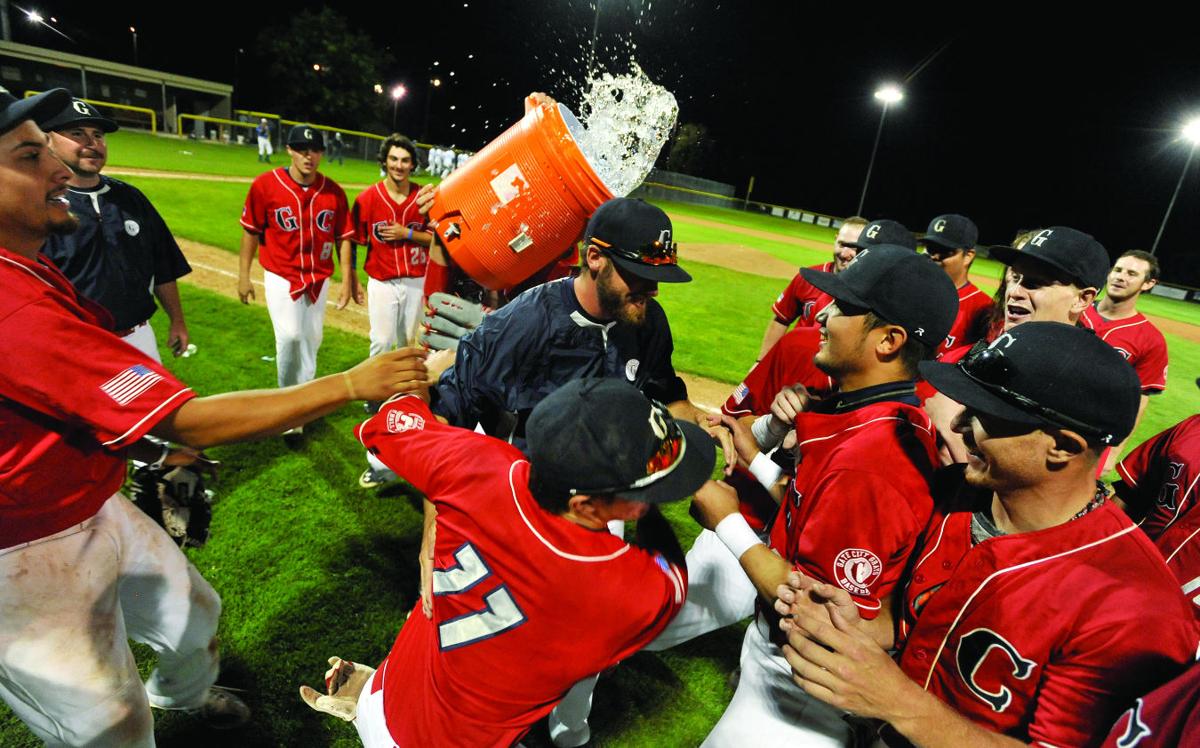 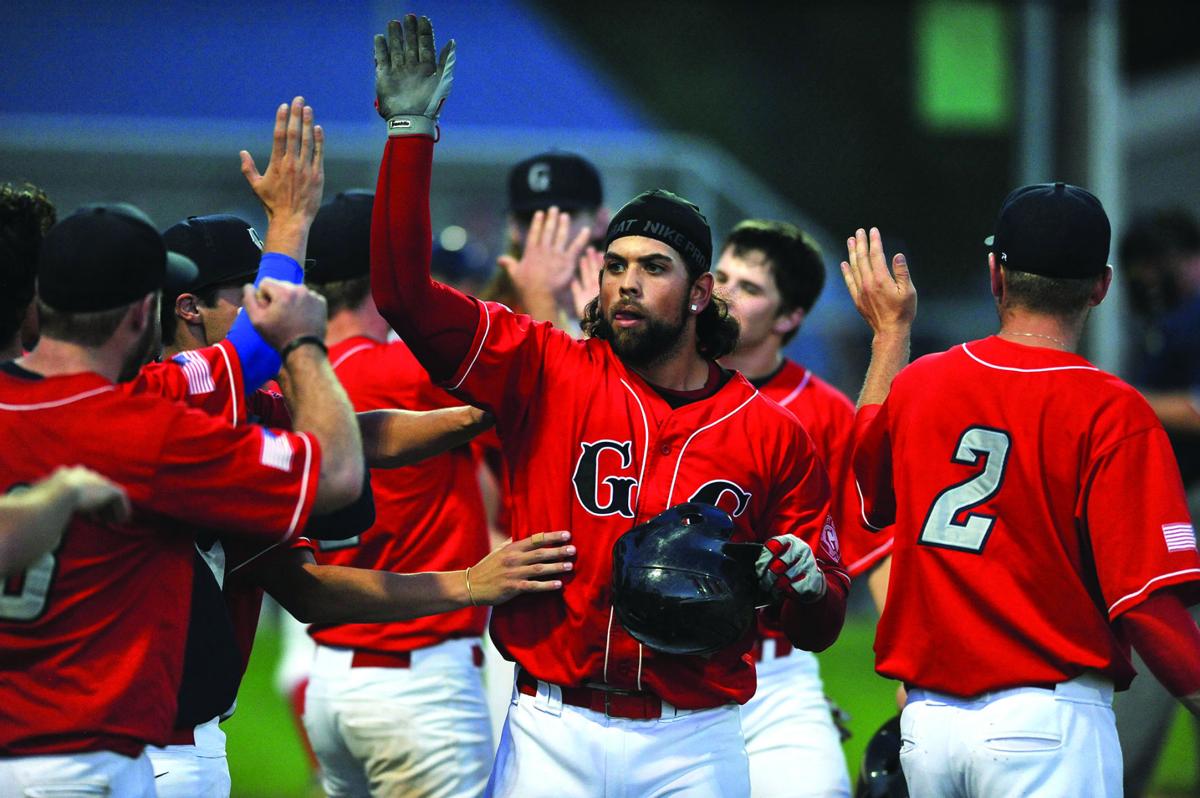 The Grays' Diego Robles is congratulated by teammates after hitting a three-run home run against Smithfield during their game in the Northern Utah League playoffs Monday, Aug. 10, 2015, in Smithfield, Utah. 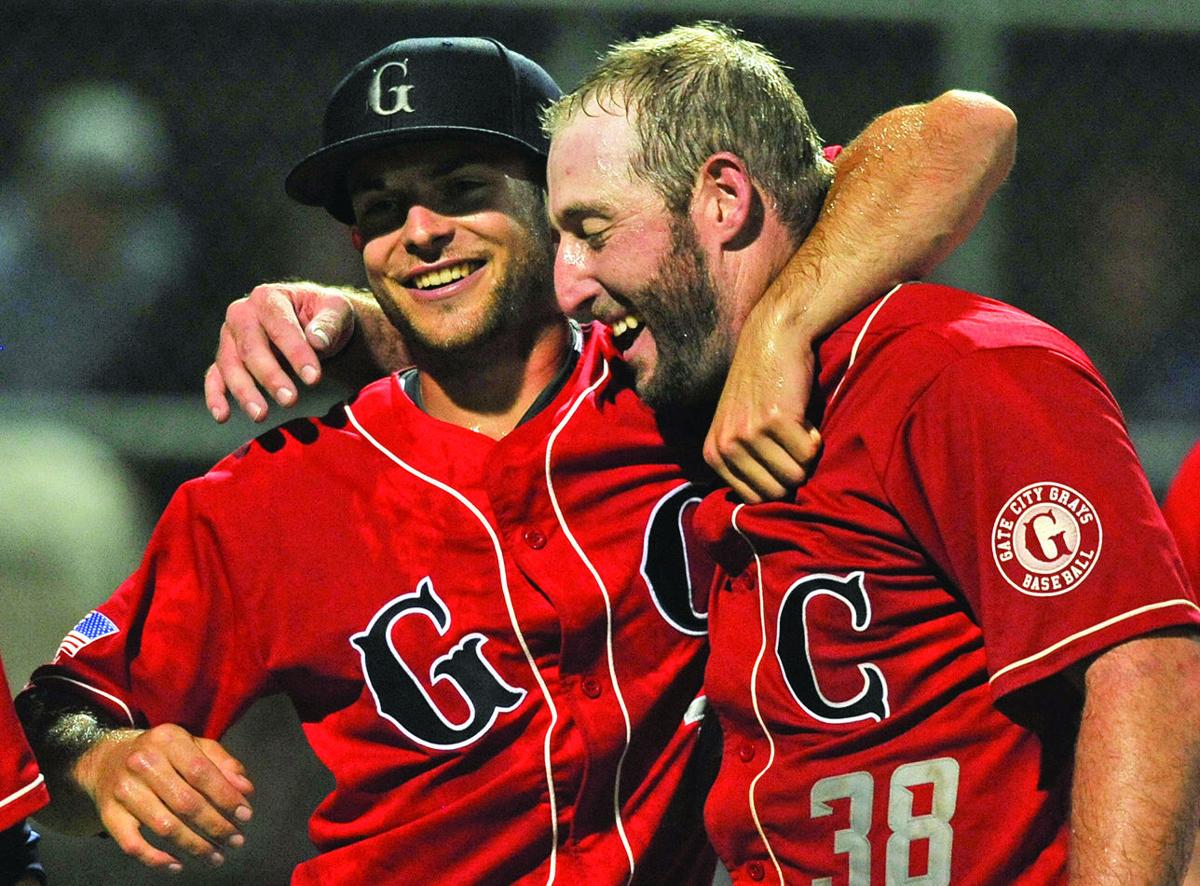 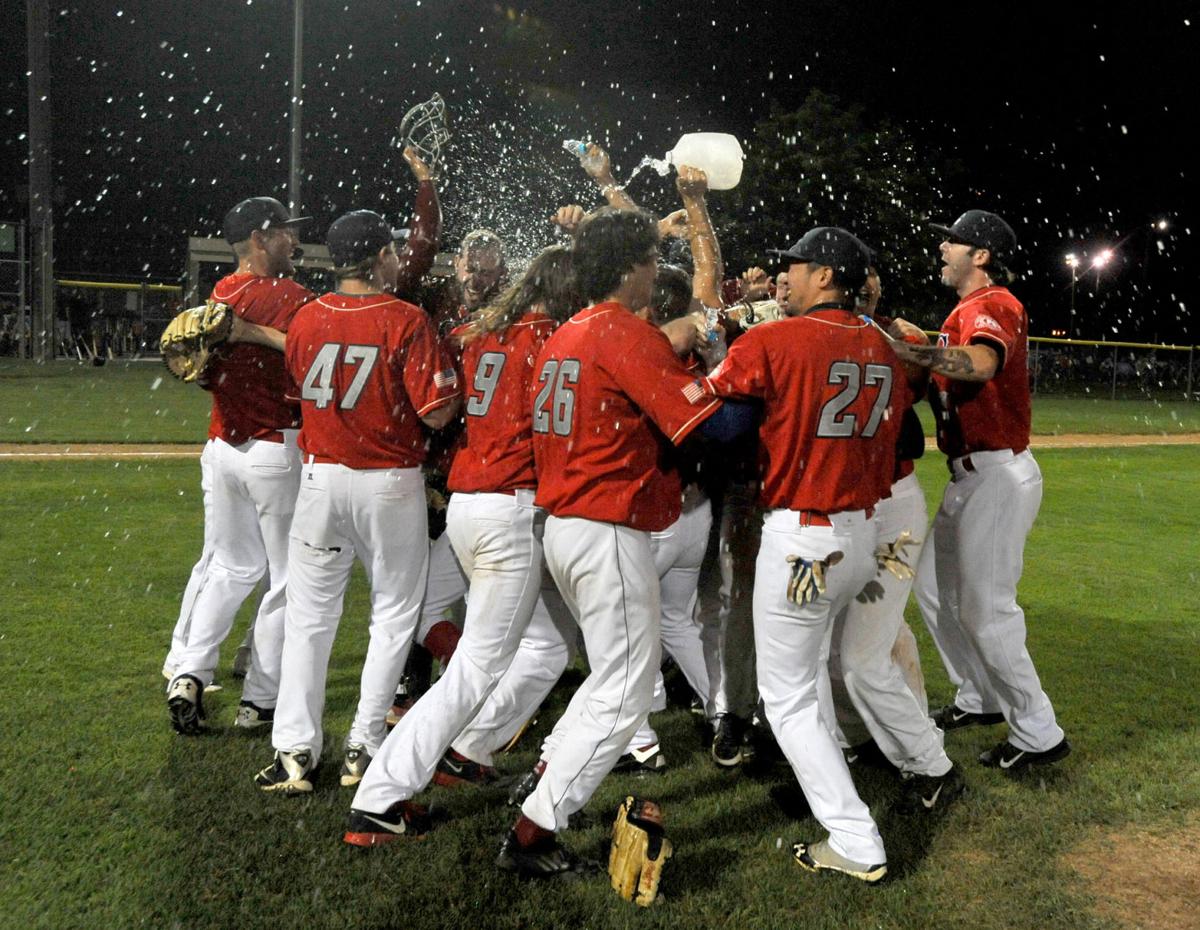 The Grays' Diego Robles is congratulated by teammates after hitting a three-run home run against Smithfield during their game in the Northern Utah League playoffs Monday, Aug. 10, 2015, in Smithfield, Utah.

SMITHFIELD, Utah — Carson Taysom stood on the field in a championship T-shirt, soaked in sweat, and hugged his crying mother and sister.

Taysom had just thrown seven innings of baseball, helping lead the Gate City Grays to a 7-4 win over the Smithfield Blue Sox on Monday in the Northern Utah League championship game.

In the Grays’ second year of existence, they’re champions.

“You dream of winning the championship as a kid,” Taysom said. “I’m just thankful to have a team like this and for us to come together.”

A graduate of Century High School, Taysom seemed to soak the moment in as he embraced his mom (Mary) and sister (Amber). It’s been a few long months for Taysom and his teammates. The Grays had their ups and downs battling rain and unexpected losses. But in the postseason tournament, everything fell in Gate City’s favor.

It started with arms like Taysom. The lefty ace struck out six, walked three and gave up four runs off seven hits against the Blue Sox.

It wasn’t a dominant performance for Taysom. Smithfield blasted two home runs in the opening inning and led 3-0 before Gate City (21-13) could record a second out. But Taysom shook off the rough start, refocused and held the Blue Sox to a run and a hit the final six innings.

Gate City manager Trent Seamons could have pulled Taysom to start the sixth or seventh inning. The Grays were clinging to a three-run lead, and had a set of healthy, eager pitchers stirring in the bullpen ready to close it out.

But Seamons left Taysom on the mound. He stuck with the man who has played for the Grays since the very start.

“Carson has been telling me all year that this is it for him,” Seamons said. “That is yet to be seen, but, yeah, I was going to ride him out. Because he earned it — all year. The last two years, everything he’s done on and off the field for us.”

Seamons put his faith in Taysom and the left-hander responded with a strikeout to end the season.

“Last year, we hit the postseason and didn’t do so well,” Taysom said. “This year was just the opposite. We fought all season long and we came together at the right time. Top of the world right now.”

Taysom did his part for Gate City defensively, and the Grays’ offense did theirs to make sure an early three-run deficit wasn’t their undoing.

The Grays needed four innings to rally. Tory Hansen scored in the first inning off a Diego Robles’ RBI-groundout. And Gate City tacked on two runs in the third.

That set up the dramatics in the fourth frame. Robles strolled to the plate with the Grays trailing 4-3. There were two outs and two runners on for the right-handed slugger. It’s exactly where Robles wanted to be.

“It was just a fun situation. I just like hitting with two outs with runners in scoring position,” Robles said. “That’s just something I’ve always done well all through college. I was just sitting for my pitch, and he finally hung me a pitch I liked.”

It was a fastball, up and in. Robles ripped the pitch to left-center field, just over the fence. The three-run home run pushed the Grays to a 6-4 lead, an advantage Smithfield never threatened.

Robles finished with four RBIs and scored two runs. Hansen went 3 for 4 and added two runs, and Greg Casper went 2 for 3 and had an RBI.

Taysom, Robles, Seamons and the rest of the Grays celebrated the championship on the field with Gate City fans who flooded Richard V Hansen Baseball Park. The NUL championship game was 90 minutes from Halliwell Park, but nobody could tell with how many Grays fans showed up.

It was fitting, really, that the Grays took over Smithfield’s home ball park. Gate City fans have supported Pocatello’s semi-pro team from the very beginning. They weren’t going to miss the biggest game the Grays have ever played in.

“Those last two innings, these fans just fueled me,” Taysom said. “You look up there and you just see Grays plastered everywhere. It was like I was at home. There was nothing better.”

Gonna guess it's been a while since Smithfield has had a crowd like this https://t.co/3dJQd9OZnE

RBI blooper by Greg Casper and the Grays lead the Sox 7-4 headed to the 6th https://t.co/hp3hDIRHUh

The Grays beat Smithfield 7-4, claim their first NUL title in the second year of their existence pic.twitter.com/zdMQdesom0

Smithfield had two homers in T1 to take 3-0 lead v. Gate City, including one by Hansen. https://t.co/UptJk6m3Mo

Gate City's Taysom sends it to B2 on strikeout. Grays down 3-1. https://t.co/ogQETld1f9

Gregg Simonds had an RBI double in a two run third by Grays, who are down 4-3. https://t.co/RodXl5flqq

Key stat: Smithfield stranded eight runners on base and didn’t score a run after the third inning.

Key moment: When Gate City’s best hitter responded in the biggest way. Diego Robles gave the Grays a 6-4 lead in the fourth inning after hitting a three-run home run.

Quotable: “Obviously, we wanted this last year. The fans are so great. The fans are basically the reason why I came back again. I had an opportunity to go somewhere else and play. But I just liked the loyalty and all the fans we draw. The guys on the team are just so great. The atmosphere is so awesome.” — Gate City catcher Diego Robles