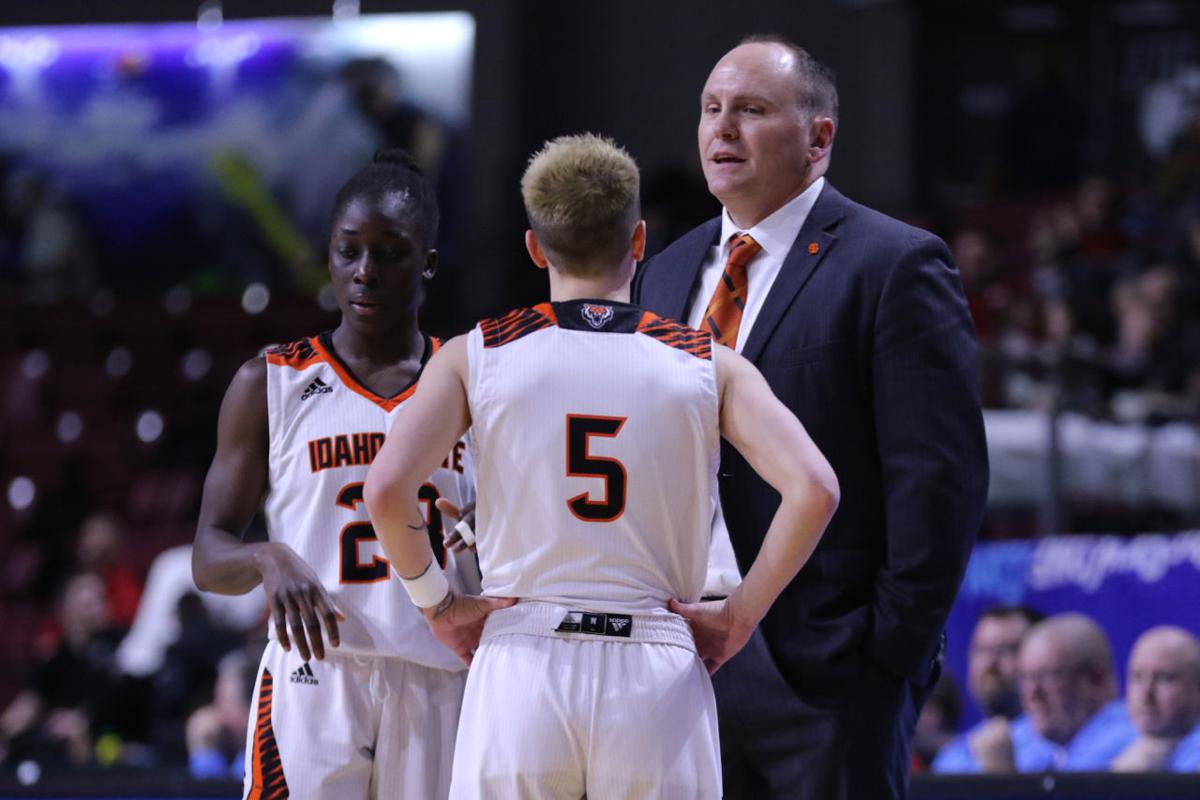 Idaho State's Callie Bourne (in white) fires a pass during a Big Sky Conference tournament game against Southern Utah on March 10 at CenturyLink Arena in Boise. 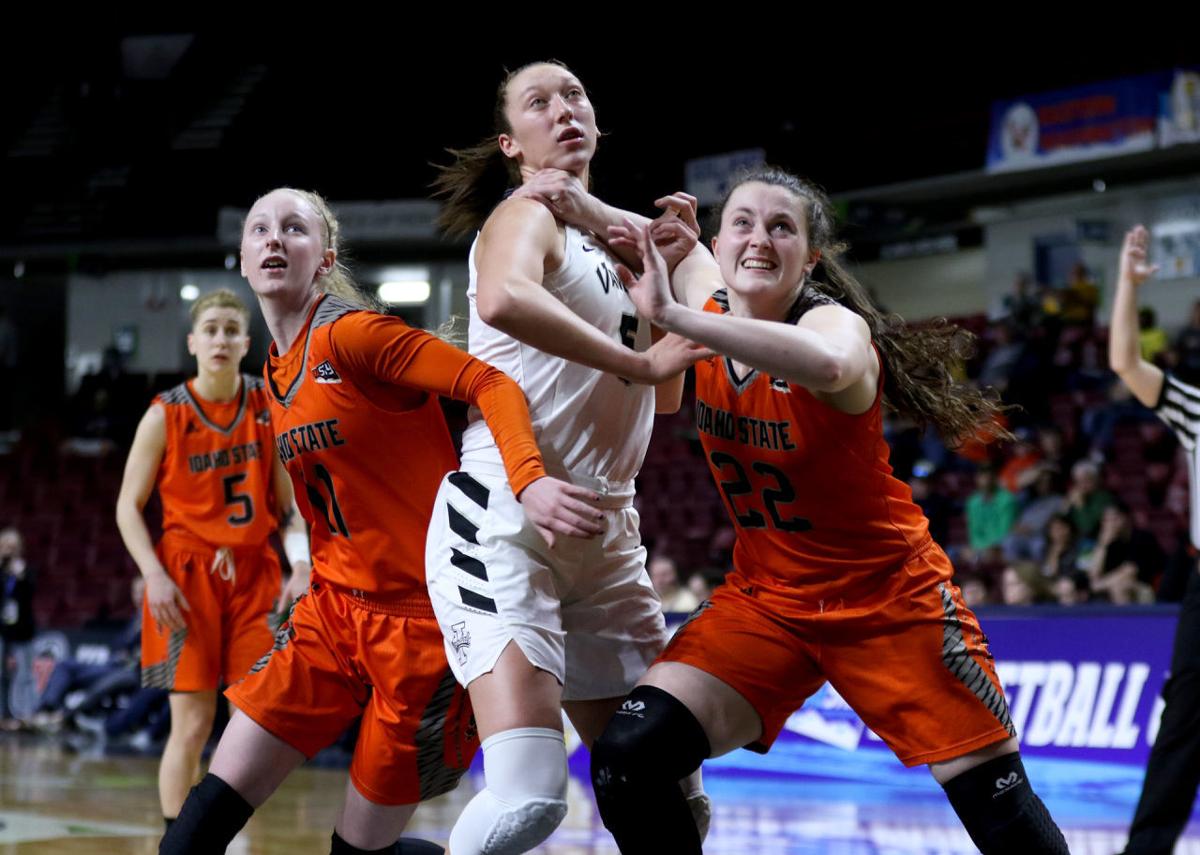 Idaho State’s Carsyn Boswell (11) and Delaney Moore (22) battle for a rebound with Idaho’s Beyonce Bea during a Big Sky Conference tournament game on March 11 at CenturyLink Arena in Boise.

On Jan. 23, the Idaho State women’s basketball team had lost three of four games, was sitting at 3-4 in Big Sky Conference play and hadn’t won more than two games in a row all season.

The Bengals lost their only senior, preseason all-conference pick Estefania Ors, to a season-ending knee injury against Arizona State on Dec. 8, and by the end of January, were starting a junior, two sophomores and two freshmen.

On the night of the 23rd, they were starting the toughest road trip in the league, a two-game swing at Montana, where ISU hadn’t won since 2012, and Montana State, the best team in the Big Sky — and facing a further fall into mediocrity.

But instead, Idaho State won at Montana, beating the Lady Griz 67-53 for ISU’s fourth-ever win in Missoula, stayed competitive in an eight-point loss at Montana State, and then went on to win nine of its next 10 games, shooting up the Big Sky standings and eventually clinching the program’s second-straight top-three finish in the conference.

“This has been one of the most surprising years I’ve ever had here,” ISU head coach Seton Sobolewski said. “It was mostly just the players surprising me and stepping up and doing more.”

In a way, though, the surprising year was par for the course for Sobolewski, who’s built a reputation around the Big Sky for engineering Idaho State teams that win despite injuries and peak at the end of the season.

In the quintessential Sobolewski season, it’s appropriate that the 2019-20 Bengals clinched the program record for most wins in a five-year span, with their 18-13 record pushing the total to 96 victories in five seasons.

“It is absolutely incredible that this program has had the success that it has had,” longtime ISU broadcaster Mark Liptak said. “Other programs lose players and fall apart. ISU loses players and keeps having successful seasons.”

Ors’ injury was the inflection point for the 2019-20 season, affecting everything that came after it.

The senior from Altura, Spain — a former Big Sky Freshman and Reserve of the Year — was leading the team in scoring and assists and was second in rebounding when she suffered a torn PCL in the final minutes of a 74-69 overtime loss to Arizona State in the seventh game of the season.

The Bengals struggled in the immediate aftermath, losing their next three — including blowing fourth-quarter leads against both Cal Baptist and Utah State and dropping their Big Sky opener by six points at Idaho.

The stretch epitomized the other inescapable theme of the early season for Idaho State — an inability to win close games, exacerbated by youth and inexperience.

At one point early in the conference schedule, five of the Bengals’ eight losses were by eight points or fewer, while the closest of their six wins was an 18-point stomping of Sacramento State.

ISU finally broke through against Weber State on the road on Jan. 16, going down early in the fourth quarter but recovering to win by 11.

“Delaney (Moore), specifically, will bring it up. That was the very first game we won that was a close game ... and that was kind of like a marquee game for our team,” Sobolewski said. “That was like the turning point. We had an OK lead, and then we actually got down at the beginning of the fourth, and then came back and won. That’s the game where we got over the hump with that.”

A week later, the Bengals got their win at Montana and were off to the races.

In Ors’ absence, the late-season run was driven by development from just about every player in the rotation. Improvements didn’t come from one or two big spots — all of ISU’s players exceeded expectations.

Junior guard Dora Goles, coming off an ACL tear that cost her the entire 2018-19 season, came back as one of the best shooters in the conference and nearly doubled her scoring average from 6.6 points per game to 12.7. By the end of the year, she was one of the toughest covers in the Big Sky, scoring in double figures in 11 of ISU’s final 12 games — including a 36-point outburst in the rematch against Montana that was the highest-scoring performance by any player in the conference during the season.

Sophomore guard Callie Bourne had an even steeper jump, going from 4.1 ppg as a freshman to 12.0. Bourne kept the Bengals afloat after Ors’ injury, scoring in double figures in 16 straight games in the middle of the season, while her physicality helped her lead ISU in rebounding at 6.6 per game and allow Sobolewski to get away with playing four guards because she could switch across positions and guard the post on defense.

Both Goles and Bourne were named second-team all-conference, but the improvements didn’t stop there.

Sophomore post player Ellie Smith, a reserve who averaged 1.8 points and 1.0 rebounds a year ago, started every game, improved to 5.6 ppg on 52.6% shooting and finished fourth in the conference with 1.7 blocks per game.

Freshman guards Diaba Konate and Tomekia Whitman burst onto the scene, with Konate averaging 9.8 ppg and Whitman 8.5 before her season ended due to a stress fracture in her foot in early February.

Sophomore shooter Montana Oltrogge went from 3.8 ppg to 8.0 and, despite seemingly finding her niche as a bench scorer early in the season, filled Whitman’s spot in the starting lineup capably after the freshman’s injury.

“Usually just a couple (players step up like that), one or two a year,” Sobolewski said. “Usually it’s a really talented freshman that then steps up their sophomore year, or a junior that’s going into their senior year, everyone seems to step up and do more in their senior year. That’s when you kind of see it. But to have Dora and Callie and Ellie and even Montana was a big one this year, they just made huge, huge strides.”

Was this partially related to the secondary effects of Ors’ injury? Sobolewski thinks so.

“I think it kind of opened the door, it’s like, hey, what we used to get out of this position, we’re not getting now,” Sobolewski said. “There’s a lot less pressure now. You kind of have this expectation of doing something with this great leader on the floor and then they’re gone. You just kind of get to a mindset where you go for it. You don’t think too much about it.”

Either way, the Bengals late in the season hit on something that worked, producing a great run and some glorious basketball.

It wasn’t enough to break into the clear top tier of the conference — ISU lost all five games against Montana State and Idaho, including a 66-51 loss to the Vandals in the conference tournament semifinals — but it was a success even without taking into account the injuries to Ors and Whitman, given the Bengals were picked fourth in both preseason polls.

Now, with everybody back — Ors is expected to receive a medical hardship waiver and regain a year of eligibility — they just have to do it again.

“Even though we did have a pretty good year under the circumstances this year, it kind of all starts over again,” Sobolewski said. “That’s why I’m really hoping that things clear up enough that we get some really good summer access with our team. We’ll start building again, building a new identity.”