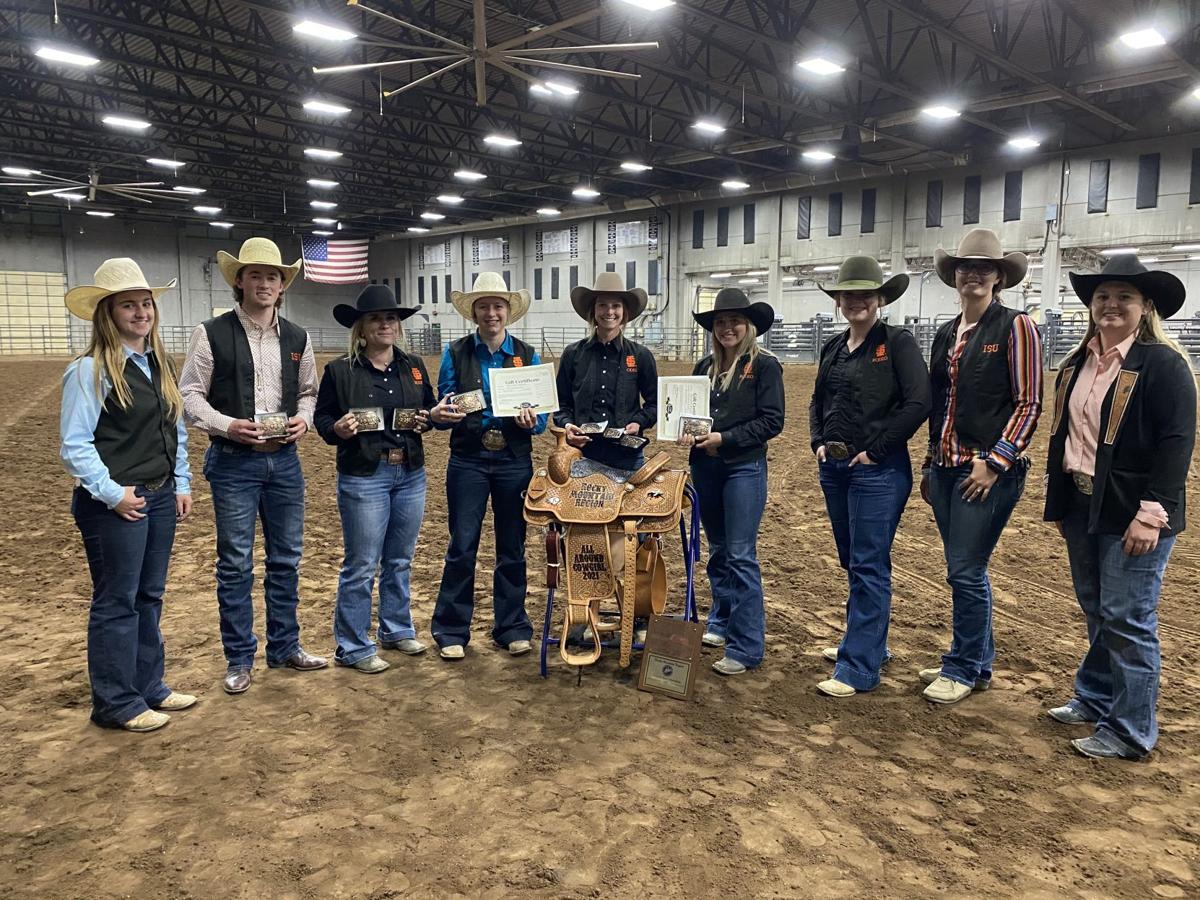 Members of the Idaho State rodeo team pose for a picture. 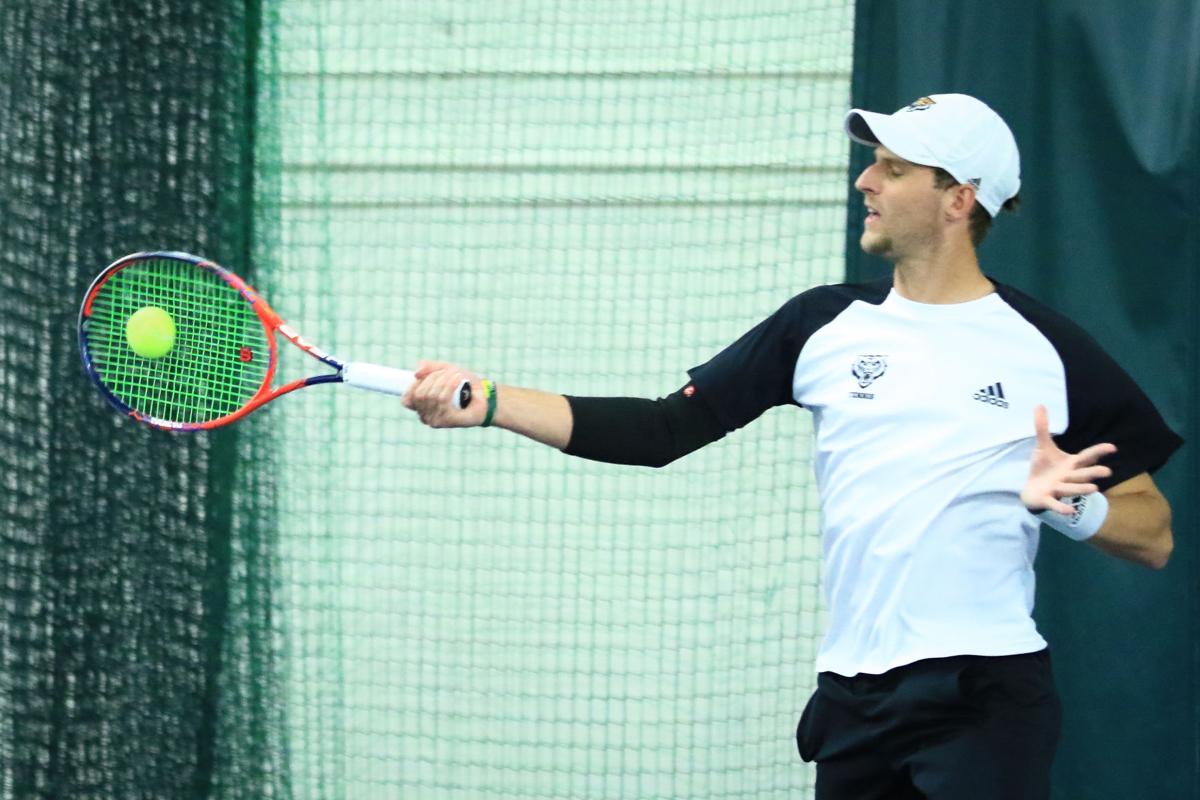 Idaho State senior Gary Rendek hits a forehand during a match against Sacramento State on Friday at Reed Gym.

Members of the Idaho State rodeo team pose for a picture.

Idaho State senior Gary Rendek hits a forehand during a match against Sacramento State on Friday at Reed Gym.

The Idaho State women’s rodeo team is ranked first in the country heading to the College National Finals Rodeo, which will be held starting June 12 in Casper, Wyoming.

With 4,774.82 total points, the Bengals lead second-place Montana State University by over 300 points.

ISU’s Haven Jones is leading the women’s all-around standings, both nationally and in the Rocky Mountain Region. Jones finished the regular season ranked second in the region in barrel racing and goat tying, and third in breakaway roping.

Mylee Mickelsen is first in the region in goat tying and fourth in all-around, and Zoie Bedke is first in breakaway roping.

Jimi Lloyd, who went to Bear Lake High School, is in seventh place in the region all-around standings. Every member of the team is from Idaho.

ISU’s men’s team is ninth in the region standings. Brock Udy, from Malad, is second in bull riding.

ISU’s regular season, which started back in September, ended last weekend with a rodeo at Utah Valley.

The clinching match against Sac State came at No. 4 singles, where Hiroki Fujita beat Liam Liles 7-5, 6-1.

The Bengals also earned the doubles point thanks to wins by Patrik Trhac and Aleksander Petrovic at No. 1 doubles and Gary Rendek and Jaime Castillo-Lopez at No. 3 doubles. Both won by a score of 6-4.

With the win, Idaho State finished second in the Big Sky’s Southern Division behind Northern Arizona. The top two teams from each division advance to the conference championships.

The Idaho State women’s tennis team defeated Sacramento State, 6-1 on Saturday afternoon in Reed Gym. The win was the first over the Hornets in program history.

“It feels great,” Idaho State coach Gretchen Maloney said. “To be able to beat Sac State for the first time and to do it the way they did it today is just awesome for our kids and it was really fun.”

The win was the final home match for seniors Angela Walker and Hristina Cvetkovic.

The Bengals won the doubles point to start the day thanks to a 6-3 victory by Walker and Hana Cho at No. 2 doubles. Sol and Lola O’Lideadha won 6-1 at No. 3 doubles.

“We just played smart,” Maloney said. “They were willing to work the point and wait for the right opportunity to attack. They kept it really clean on serve and return. They got points started and kept the ball deep well.”

“I think I will always remember this match,” Walker said. “Going out with a win and remembering my senior day, everyone being there for me and all the support I had means a lot to me.”

The Idaho State softball team dropped two hard-fought contests against the University of Montana Saturday afternoon in Pocatello that saw 49 runs scored between both teams over the two games played. Game one ended with a UM 19-15 victory and game two saw the Bengals lose a heartbreaker 8-7.

Game one started drastically for the Montana Lady Griz. After two innings, UM held an 11-2 lead against the Bengals. Rather than give up and accept a run-rule loss the Bengals turned on the gas.

In the third, the Bengals closed the gap to six after Amber Arreola singled down the right field line, bringing home Isabel Cargill and Shea Perkins.

Montana tacked on some more runs in the top of the fifth but the Bengals weren’t done. Cargill brought home Perkins off a double and Arreola followed that up with a two-run home run.

The Bengals would pull to within two in the sixth after Angelica Cano hit a two-RBI double and Arreola brought in one more run.

The game started with a strong Bengal attack in the bottom of the first. Mailee Newman brought in Cargill with a single to right and Perkins hit a double down the left line to bring in Newman and give the Bengals a 2-0 lead.

After a scoreless second inning, storm clouds moved in over red hill and the cloudy sky soon turned into a deluge. For one of the first times this season the rain also brought lightning an the teams entered a weather delay.

After delaying for a little over an hour, the two teams got back to it.

In the third, UM tied the game at 2-2 then tacked on two more runs in the fourth to take a 4-2 lead.

In the bottom of the fourth, Emma Bordenkecher hit a double to left center and brought in two Bengal runners to tie the game at 4-4.

Montana took a 5-4 lead in the top of the fifth.

The Bengals responded, in the bottom of the inning Cano hit a three-run bomb over the left field wall to give the Bengals a 7-5 lead.

UM was able to chip away at the Bengal lead before taking a game-winning 8-7 lead in the top of the seventh.