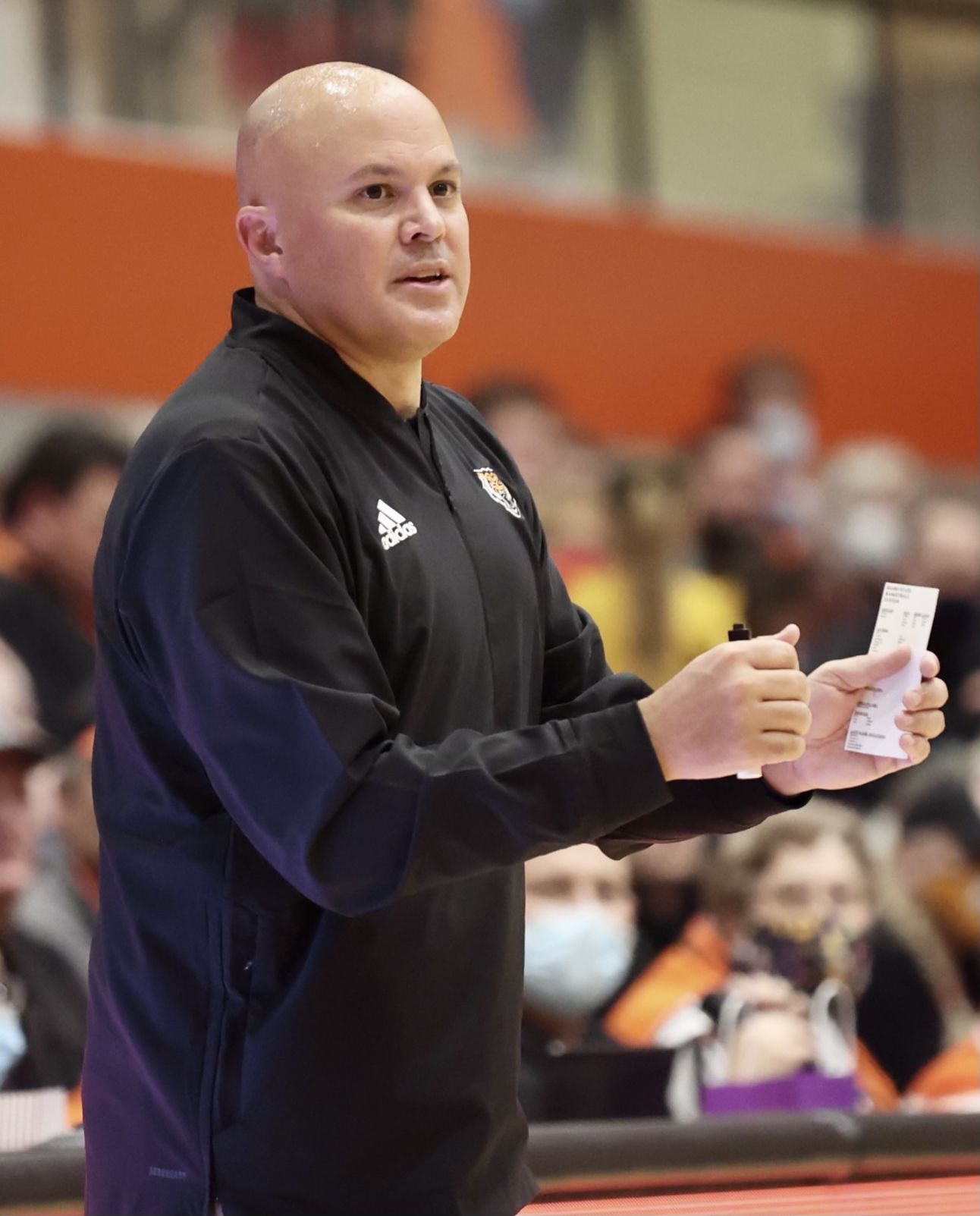 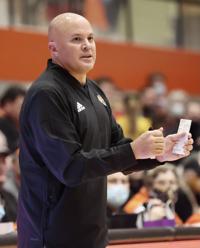 Idaho State coach Ryan Looney stands on the sideline during an exhibition against Multnomah. 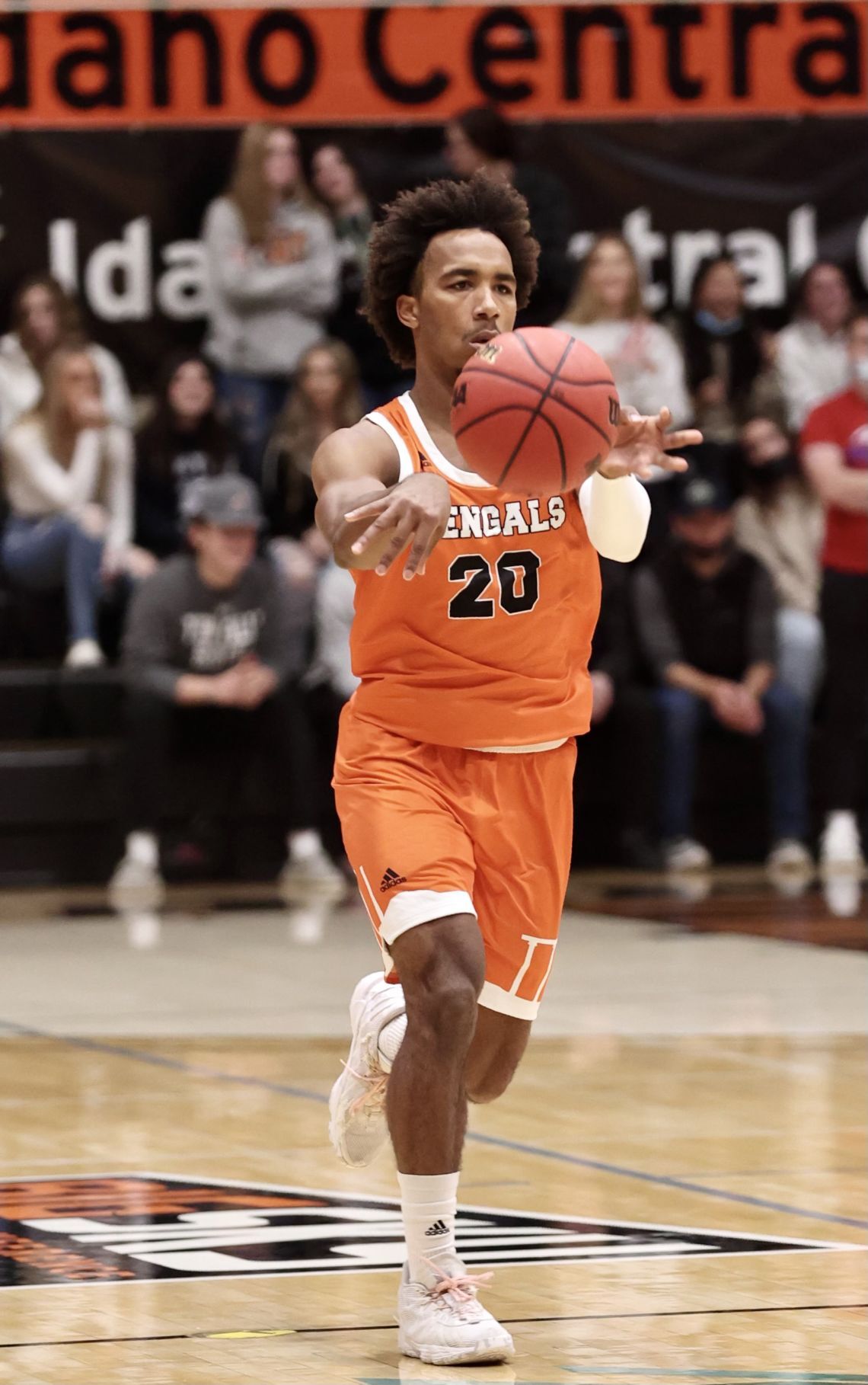 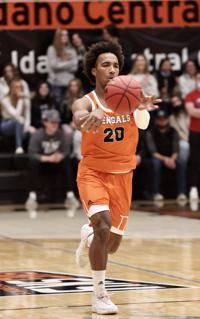 Idaho State coach Ryan Looney stands on the sideline during an exhibition against Multnomah.

The YouTube clip lasts just over two minutes and has never made the game of basketball look more complicated. Ryan Looney is mic’d up, directing his Seattle Pacific players like Spielberg.

Titled “Introduction to Swing Offense,” the video is effectively a tease to buy a bigger collection of films. The company Championship Productions, which produces educational videos by coaches for coaches, contacted Looney back in 2013 to make a series of three tutorials on the swing offense. Looney’s teams at Seattle Pacific used the scheme make back-to-back Division II Sweet 16 appearances and even notch a exhibition victory over the University of Arizona.

The three videos total 186 minutes and the 3-pack is listed as a “Best Seller” on the Championship Productions website. Perhaps because the two-minute teaser leaves the viewer with an unreal amount of questions. The video feels more like choreography than basketball, more art than leisure. In other words, basketball has never felt more complex, never looked more beautiful.

“We’re not just rolling the ball out and playing basketball,” Looney said. “We’re running a specific system and expecting all of our players to make all the right reads within it.”

Looney sometimes enters a game with 40 play calls to beat whatever opponents throw at him, which makes operation of the swing sound similar to how a quarterback dissects a defense.

In the simplest terms the offense’s goal is to get the ball into the paint, which should free up shots on the perimeter. That is not necessarily a far-out concept. But it is unique because of how players interchange roles. Cuts and screens come away from the ball and players “swing” from high-to-low and low-to-high, which benefits lengthy rosters.

The swing offense is the basketball equivalent of a Rube Goldberg Machine. So much is happening. The ball is over here. Now it’s over there. Pieces are moving. They’re working off each other. There is a grand goal to be obtained. The ball is supposed to end up somewhere. But you watch and watch and you’re mesmerized by all these singular parts creating chain reaction after chain reaction. So you watch for the little stuff. The dominos falling. The screens being set. And the ball eventually goes where it’s supposed to and part of you is in awe and part of you is stupefied why it took so much to do something so small.

When executed to its peak, the swing offense can be basketball nirvana. Looney has been trying to reach that state ever since he first saw the offense in the late-90s.

Fresh out of college, Looney was a graduate assistant at Wisconsin-La Crosse, which happened to play in the same conference as the best Division III school of the decade, UW-Platteville – winners of four national championships in the 90s. At the helm was Bo Ryan, the future college basketball hall of famer who led Wisconsin to four Big Ten titles and a pair of Final Fours.

Back then, though, he was dominating the lower levels of the sport with his unique swing offense.

“I watched it first hand from the bench (and thought), ‘That is awesome. We have no chance at beating them,’” Looney said. “From that moment, during the five years I was an assistant, I tried to learn as much as I possibly could about it. So then, when I got my first head coaching job at Eastern Oregon (in 2004), that’s what we put in.”

Consider this: Wisconsin-La Crosse didn’t run the swing offense. That means Looney learned the intricacies of a little-used offense in his spare time, developing a deep knowledge of the swing as, essentially, a side project. The whole thing sounds like the concoction of a grand plan. He spent years toiling off the clock to master a niche concept so, if and when he became a head coach, he’d be prepared to run the swing.

“I liked the areas on the floor where they were getting shots. I think it’s pretty simple. Post-up for two-point shots and open 3s,” Looney said. “I thought, all the way back then, the swing was something that would allow you to do both of those things at a high rate … And then, I think the big part of it for me is I want a team that’s balanced and unselfish and willing to play together. I think the swing promoted that as well.”

Yet, lovers of the swing offense remain like a small cult. As of 2021, there are just two Division I teams that run it: Idaho State … and Wisconsin.

Andrew Van Handel grew up in Green Bay, Wisc. in the 90s and had never heard of Bo Ryan or UW-Platteville or the swing offense. Unsurprisingly, when Ryan took the Badgers’ head coaching gig in 2001, his name and scheme became a popular fixture in gyms across America’s Dairyland – so much so that Van Handel’s high school began to run the swing offense in the early 2000s.

Trying to implement the scheme his freshman year, the team plopped in an old VHS with corny music. And there was Ryan, in a blue polo and khakis, directing his UW-Platteville squad and demonstrating how to run the swing.

Helping Ryan in that blurry video was Greg Gard, who played under Ryan in the late 90s then joined his staff at Platteville in 1993 and stayed on Ryan’s bench for the next 22 years. In the middle of the 2015 season, Ryan retired and Gard took over for his mentor.

“Coach Gard is a lifelong learner,” Van Handel said. “He is not above looking at, ‘OK, yeah, I came from a staff that made this offense famous, but that doesn’t mean there’s not somebody out there doing something that can help us.’”

The current Idaho State coach had spoken with Ryan in the past, asking him questions on recruiting trips and coaching conventions – very particular inquiries on things such as “if somebody defends you this way, what are you looking for,” Looney said. As such, Looney and Gard have spoken in the past and the pair had used each other’s programs as learning tools.

Last summer, Looney had his Idaho State centers watch clips of how Wisconsin’s big men got shots while still keeping the flow of the offense. Conversely, three years ago, Gard gave his video coordinator a homework assignment to watch Looney’s swing tutorial.

“I really admired some of the things they were doing,” Van Handel said.

Recently, Van Handel hopped on a Zoom call with Idaho State’s assistant coaches as sort of an open space, bouncing ideas off each other and learning from what the other school is doing.

The Bengals’ coaches impressed Van Handel with how they discussed running the offense with tempo and pace. The swing is not an offense predicated on speed – Idaho State and Wisconsin were two of the slowest teams in the country last year – but Idaho State gets into some of its actions faster than the Badgers. But Van Handel said he tried to harp on the fact that there are times you can be a little methodical to get the defense where you want it.

“From my perspective, it was helpful to hear kind of a different perspective on what they do on the challenges currently (have),” Van Handel said, “and how much they shared or disagreed on those sentiments when it comes to high school players not knowing how to move without the basketball.”

Van Handel could talk about the swing for hours and hours. There may be no one in the country who is a bigger proponent for the scheme than him. The Wisconsin staff knows their video coordinator is a swing lifer. They can give him a dozen offenses to do a film study on and know he’ll come back telling them why the swing is better than all of them.

“I just like the concept of how can I beat a guy without having it be one-on-one play all the time,” Van Handel said. “I just think the swing gives some great opportunities with the angles that, hey, no matter what you do defensively against me, I’m going to have a counter.”

In some ways, Idaho State and Wisconsin are sister programs. Neither are competing directly against each other. Idaho State isn’t recruiting any kids away from Madison or competing for a Big Ten championship. They are, instead, bound by this complicated offense that their two head coaches have committed to run.

The key word there is committed. Van Handel and Looney rave about this offense the same way people talk about using a computer over a typewriter – which leads to the question: If the swing is so good, why aren’t more teams using it?

“It takes a lot of patience, not just from the players but from the coaching staff,” Looney said. “I’ve had hundreds, if not thousands of high school coaches over the course of the years want to learn how to do it. It’s about being able to have the discipline as a coach to stick to your plan, understanding that it’s going to look sloppy for a little while before everyone gets on the same page.”

Those early growing pains don’t just require a plan, they require a coach selling that plan. To their players. To their fans. And to their boss.

Before she hired Looney in the summer of 2019, ISU Athletic Director Pauline Thiros watched myriad offenses from a handful of coaching candidates. Looney’s swing stood out. It “ran like a top,” she said. But, in noting that, Thiros wasn’t naive to how much time it took to get to that point.

“While I believe it is a great system that creates space and a high volume of different scoring opportunities, I also know it is complex and takes patience to develop,” Thiros said. “Doing so requires a strong culture, discipline, and tremendous trust from your team as the system develops to where it is truly effective.”

If history is an indicator, that comes at about year three for Looney-coached teams. At both Eastern Oregon and Point Loma Nazarene, Looney’s teams struggled out of the gate, were better by his second year and conference contenders by his third.

That’s the goal in Pocatello, where Looney has brought hope to the ISU men’s program. The Bengals 8-22 in Looney’s first season but finished 13-11 last season, the program’s second year above .500 in almost two decades.

Even if year three doesn’t end with some type of trophy, Looney has a plan. Idaho State has a trajectory. And that should make Bengals’ fans thankful.