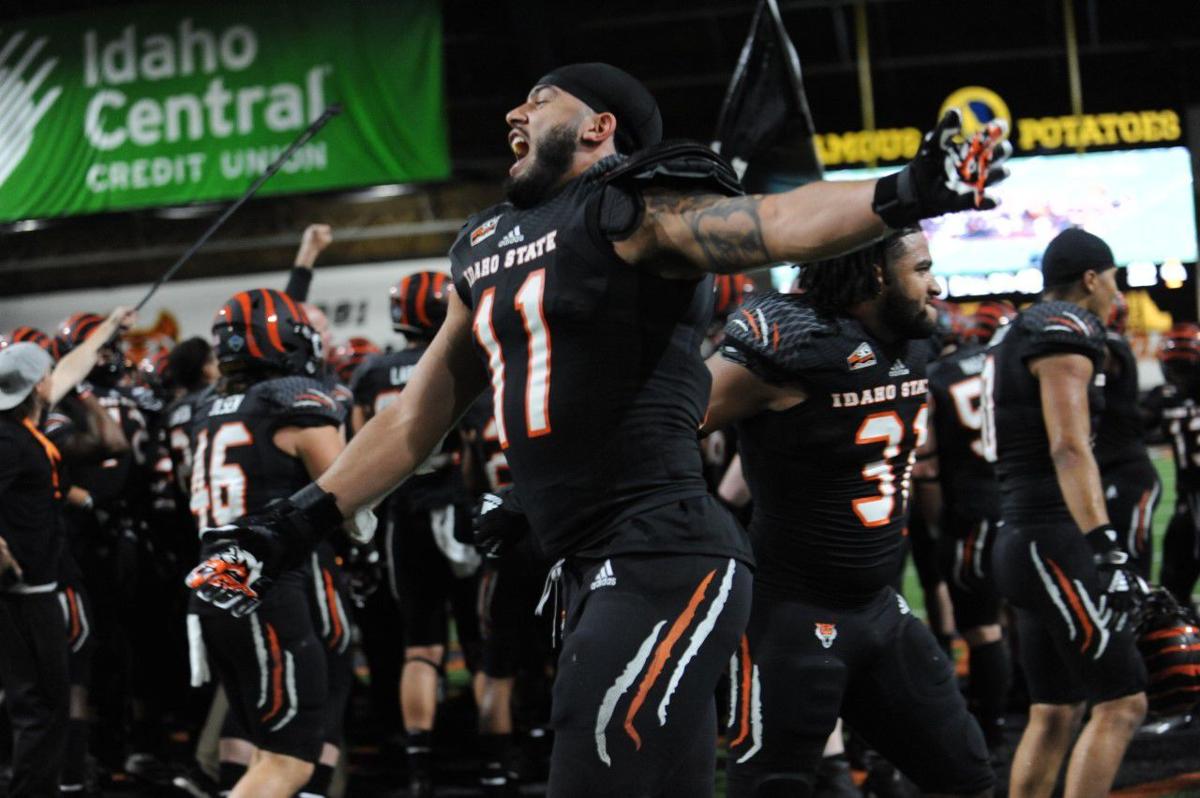 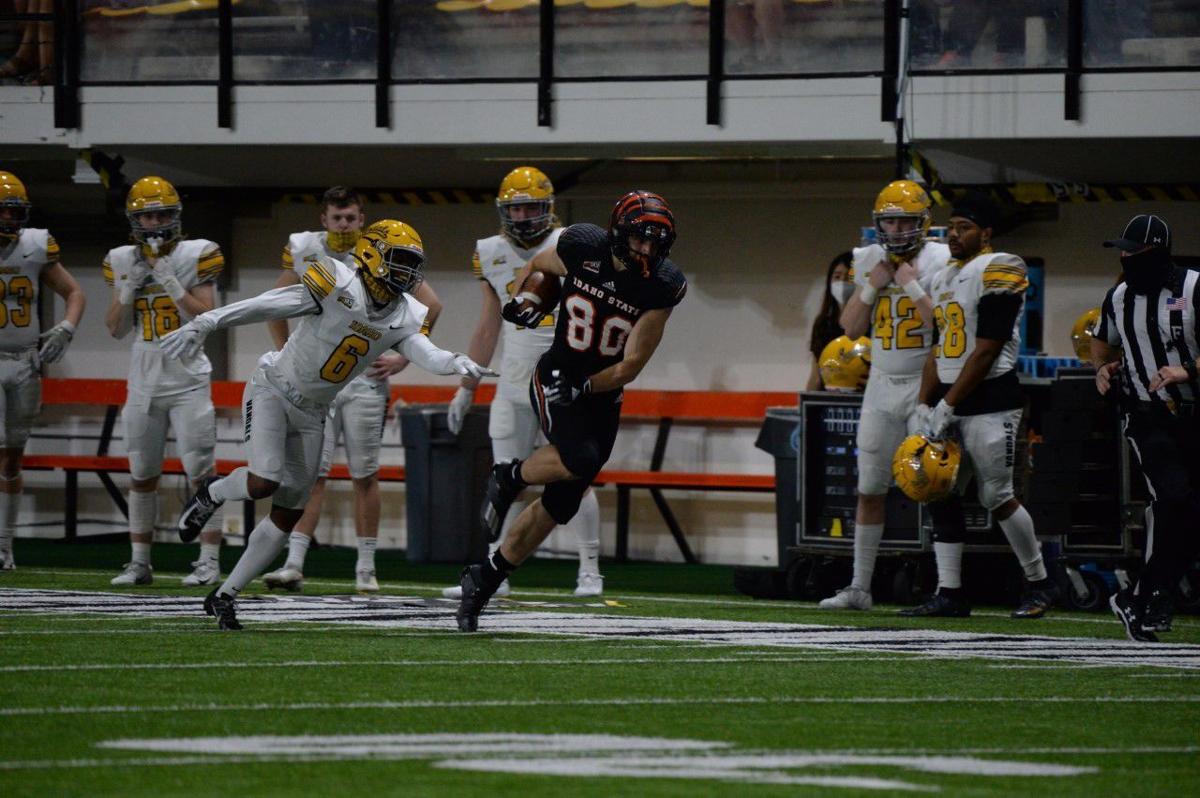 Idaho State wide receiver Tanner Conner (80) runs up the sideline during the Bengals’ 24-22 win over Idaho on Saturday at Holt Arena.

Idaho State wide receiver Tanner Conner (80) runs up the sideline during the Bengals’ 24-22 win over Idaho on Saturday at Holt Arena.

POCATELLO — As Idaho State prepared to kneel down to end the game, Oshea Trujillo stood well behind the quarterback, waving his arms to one side of Holt Arena, then the other as he encouraged the nearly 3,000 Bengals fans in attendance to get loud.

Trujillo's fellow linebacker Rasheed Williams was out there too, and wide receiver Tanner Conner. It wasn't the typical players you'd expect to find in a victory formation, but they'd earned it.

Trujillo, Williams and Conner, all seniors, remembered the last time Idaho State played Idaho – a 45-21 loss in 2019 that was probably the lowest point of a season that had plenty of low points.

On Saturday, they were big parts of a team effort that took the Bengals to a 24-22 win over their in-state rivals.

"I've never been a part of the victory formation before, so that was awesome for me," Conner said. "We had Oshea and Rasheed out there. It was fun to go out as seniors and actually end the game on our terms. To have that feeling and do it against our rivals, it couldn't have been any better."

Jayden Dawson's pass breakup on fourth down with under a minute to play sealed the victory for Idaho State, which went up 14-0 early, trailed 15-14 after three quarters and turned around nearly two quarters worth of offensive ineptitude with 10 points in the fourth, just enough to hold off the Vandals.

It was the kind of win that will wipe away plenty of bad memories for Idaho State — of 2019's rivalry game, which saw Idaho score three defensive touchdowns and kicked off a six-game losing streak for the Bengals, and of their close-game shortcomings in 2020.

In each of their prior two games going into Saturday – against Eastern Washington and and UC Davis –Idaho State had a lead late. In each of those two games, the ISU defense allowed a last-minute scoring drive. Just like that, two potential wins against ranked teams slipped through the Bengals' fingers.

But not against Idaho.

The Vandals, ranked 24th in the nation coming into the game, scored with two minutes, 48 seconds to go, cutting the ISU lead to 24-22, and got the ball back not even a minute later when Idaho State went three-and-out.

Against Eastern Washington, the Bengals had the exact same situation — up two scores with time running out and the defense gave up a score, then the offense failed to put the game away, then the defense failed again.

Now, they were closing in on hitting that unwanted trifecta again. And, again, it was in the defense's hands.

An offensive pass interference penalty on first down put Idaho behind the sticks, and on fourth and 10, Dawson was all over a pass to the flat that wouldn't have been close to the first down even if it had been caught.

For the game, Idaho State's defense held Idaho to 341 yards on 82 plays, an average of 4.2 yards a play. Vandals quarterbacks — Nikhil Nayar replaced Mike Beaudry early in the game — were a combined 16 for 43. And two of Idaho's four scoring drives came on short fields after a Tyler Vander Waal interception and an disastrous shanked punt at the end of the first half.

"As a defense, we said, we put those last two games, Eastern and UC Davis, on our shoulders," Trujillo said. "In the last minute, they won those games. We went out there, we had an opportunity, we got off the field on fourth down. That's huge. We've got a lot of young guys, so just seeing that it's coming together, we're going to be doing something here real soon."

Connor Wills led the ISU defense with 10 tackles. Trujillo had nine and a sack, Kainoa Fuiava nine and Williams eight.

On offense, it was all about the roommate connection of Vander Waal and Conner for the Bengals.

The senior receiver finished with nine catches for 208 yards, fifth-most in a game in ISU history and over half of the Bengals' total of 398 passing yards on Saturday.

Idaho State's offense looked to be in trouble over the second and third quarters, scoring no points as Idaho started getting more pressure to Vander Waal. No problem. Two possessions after Idaho took its only lead at 15-14, the Bengals sent Conner deep on one of the final plays of the third quarter.

Vander Waal got just enough time to hit the track star for a 54-yard gain, the ultimate antidote to a sluggish offense.

"I texted Tanner yesterday, I was just messing with him, I said, 'Run deep, I'll throw it deeper,'" Vander Waal said. "To have Tanner as a deep threat, it's unreal, just knowing that he's going to run by his guy, he's going to go up, he's going to make a play for me."

That drive ended with a 21-yard Kevin Ryan field goal to put ISU back in the lead.

And against Idaho, the party in the locker room was all that much sweeter.

"We sang the fight song, which we always do, and we just said to one another that's what should have been happening this whole time," Phenicie said. "We knew we could do it. You don't really need to say much in there, the best part is singing the fight song with the guys."