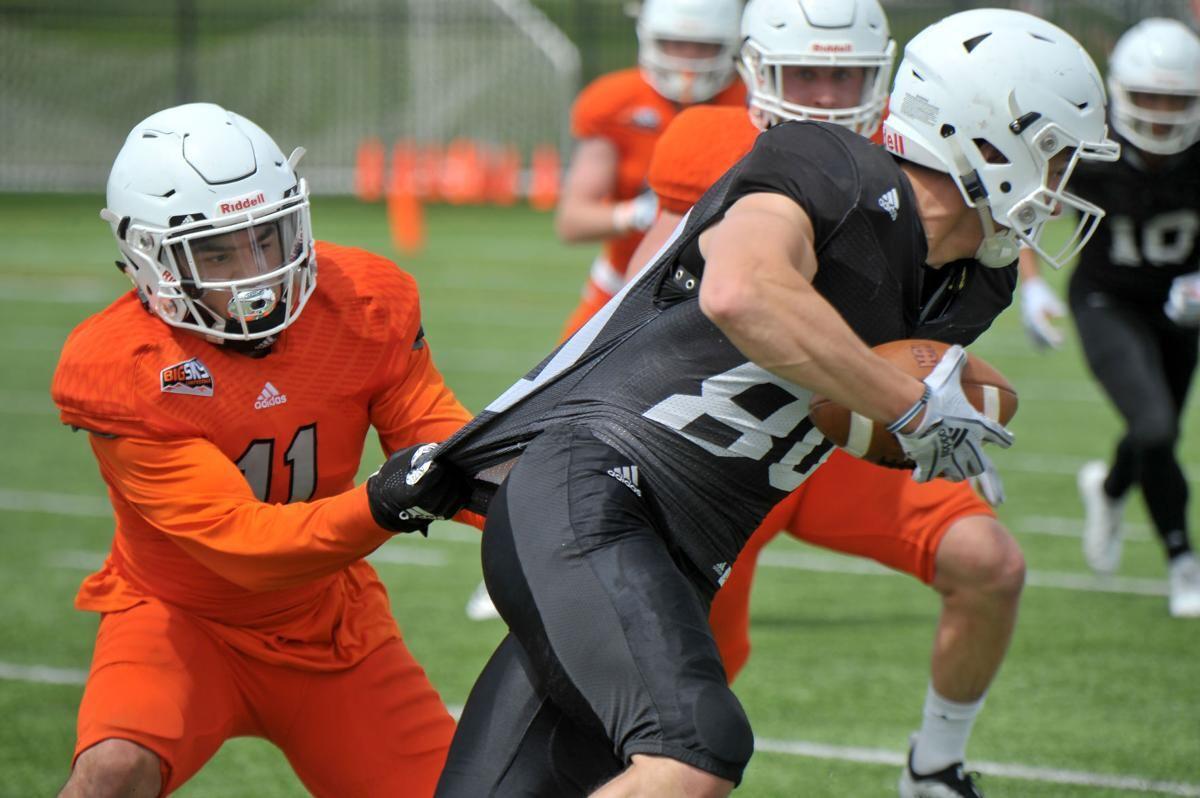 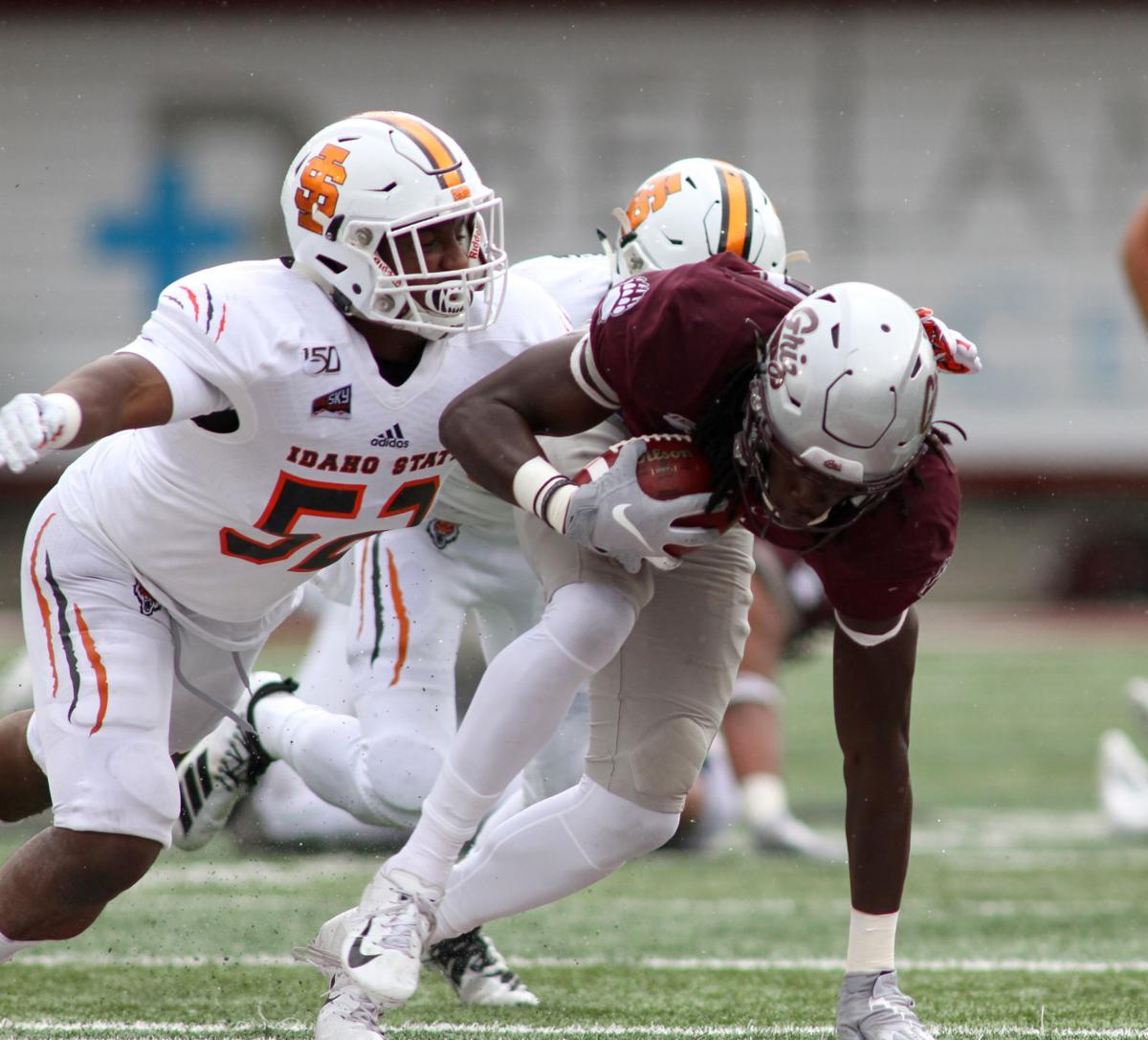 Writing a preview about Idaho State’s linebackers can be more difficult than at some other positions on the team. Instead of similar players filling similar roles, defensive coordinator and linebackers coach Roger Cooper recruits his guys to fill one of four distinct positions on the Bengals’ 3-4 defense.

Here’s the cast of characters.

The Rush: Whether he lines up with his hand in the dirt or standing up, the rush linebacker’s main job is simple — get after the quarterback.

With Idaho State’s three-man defensive line focusing on filling gaps and stopping the run, the rush, or boundary, linebacker is the Bengals’ main source of pressure and, generally, best passrusher.

Think long and lanky, with the strength and hands to keep offensive linemen off him, the speed to blow past them and the agility to bend back to the quarterback.

“The rush is our unicorn,” Cooper said. “He’s our long, lengthy guy that can pass rush but also play in space. He has to hold up in a four-down as well, as a defensive end.”

Luke Holloway, playing here in 2019, led ISU with 6 1/2 sacks. Only defensive end Kainoa Fuiava, with four, got to half of Holloway’s total.

Rasheed Williams, who came up as a defensive end with a 4 1/2-sack season as a freshman in 2015 and has since battled injuries, is expected to start here.

Now a graduate student going into his sixth year, Williams has played in 22 games in the last three years, but recorded just one sack in that time.

With his injury history and his experience, Williams is being held out of some practices — a “pitch count,” Cooper called it — but all indications are that he’s looking better than he ever has.

“Rasheed’s resilient,” senior outside linebacker Oshea Trujillo said. “He’s been here longer than me, but he just stays keeping his head down and going to work. You’re going to see that we’ve been missing Rasheed Williams a lot.”

The Will: Moving inside from the rush, the Will linebacker has multiple roles depending on what the rush is doing on a given play. If he’s playing up on the defensive line, the Will becomes more of a traditional 4-3 outside linebacker, playing in space and often being asked to cover.

But when the rush linebacker drops back more is when the Will really shines, playing downhill and stopping the run, fulfilling the duties of a middle linebacker.

“He’s kind of the hybrid of the Sam and the Mike, he’s your most natural football player,” Cooper said. “He’s the guy that’s just going to run to the ball.”

Senior Kennon Smith and junior Darian Green are still battling for the No. 1 job at Will as spring camp progresses. Both have plenty of experience. Green played in nine games but finished sixth on the team — and second among returning players — in tackles with 58.

Regardless of who starts, they’ll play a big role in ISU’s run defense, where the Will and Mike linebackers eat up most of the tackles as the defensive line occupies blockers. ISU’s 2,036 rushing yards allowed last season was the team’s fewest in a season since 2010.

“That’s a good mix of the down guys eating up gaps, and then the backers understanding where they fit in the defense, flowing and tackling,” Cooper said. “That’s one of the bonuses of the front we run, is being able to gap everything up and play fast.”

Cooper also mentioned junior walk-on D.J. Hagler, from Middleton, and freshman Tyevin Ford, a converted running back from California, as guys who could play roles at both the Will and the Mike.

The Mike: The man in the middle (hence the name), the Mike linebacker has to be immovable against the run game and know ISU’s playbook in and out.

“He’s basically the brains of the operation, he has to make a ton of calls, move the front when we need to,” Cooper said. “We ask him to do a bunch of things, so he’s the smarter, bigger, stouter guy.”

BYU transfer Connor Wills is projected to be the opening-day starter for the Bengals. Like Smith and Green, Wills got plenty of part-time experience in 2019, stepping in for a while when Kody Graves got hurt and finishing right behind Green with 52 tackles in 12 games.

Over the year-plus since then, he’s only solidified his claim on the job.

“He won the job by being really clean in his assignments,” Cooper said. “His attention to detail is great, and he can line the whole defense up. It’s going to be a pleasure to have him.”

Ford and Hagler could also play here, and although Cooper didn’t mention him, it’s the best fit for transfer Charles Ike, who’s listed at 6-feet, 240 pounds and is coming off setting the school record for tackles in a season at California’s College of the Canyons.

The Sam: And now we’ve reached the other side of the formation. Unlike the rush and Will, who play on the boundary side of the field — that is, the one closest to the sideline given where the offensive lines up — the Sam plays on the...well, field side of the field.

That means he’s playing in much more space, and that means he’s got to be fast. This is the ‘backer most often found in coverage, but he has to be strong enough to play on the line of scrimmage as well.

Cooper thinks he has a player who can do all that in Trujillo, who’s played in every game the last three seasons for ISU and steadily upped his tackle count each year, from 34 to 47 to 64 in 2019, a mark that makes him the leading returning tackler on the team.

“He’s one of the best athletes I’ve seen,” Cooper said. “He’s undersized, but even for his size, he has such pop. He can hold up on the line of scrimmage just because he’s so strong. He knows how to use his body and he’s a phenomenal athlete.”

As one of the most experienced players on the entire team, Trujillo is expecting big things from himself as well in 2021. Because of all the things the Sam linebacker is asked to do, his impact won’t be measured mostly in tackles, like the Will and Mike, or in sacks, like the rush. Instead, if he plays up to his potential, Trujillo’s statline will be packed with both of those things, plus interceptions, passes defended, forced fumbles — you name it.

As if to drive home one final time the differences between his linebackers, Cooper mentioned Alec Flanagan as a player to watch behind Trujillo at Sam. Flanagan, listed at just 192 pounds, is moving up from safety, where he’s still listed on ISU’s roster.

Compare that to the rush linebacker, where Williams (listed at 275 pounds) is moving down from defensive end. It’s like two different species.

But regardless of where they’re lining up, ISU’s linebackers are thinking big this year.