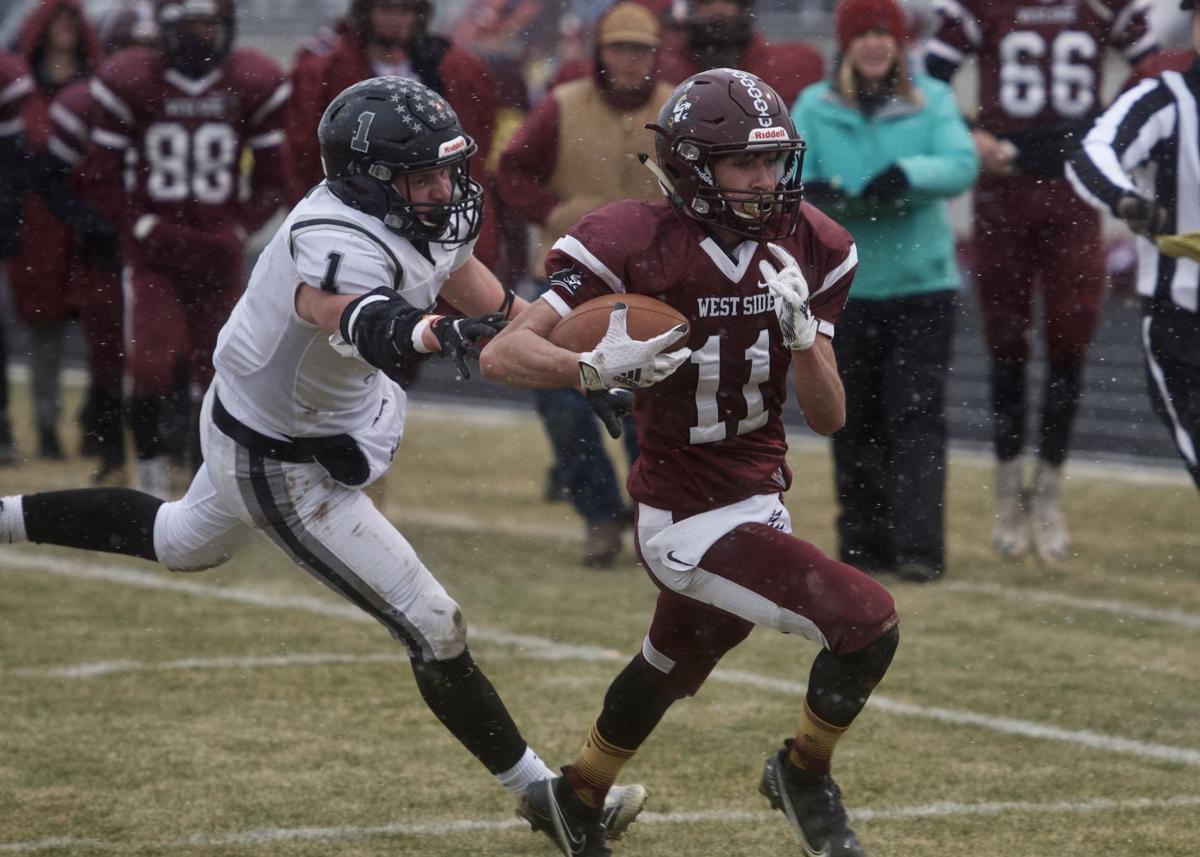 West Side’s Josh Reeder (11) sprints downfield during the Pirates’ 2A state semifinal game against Declo on Friday in Dayton. 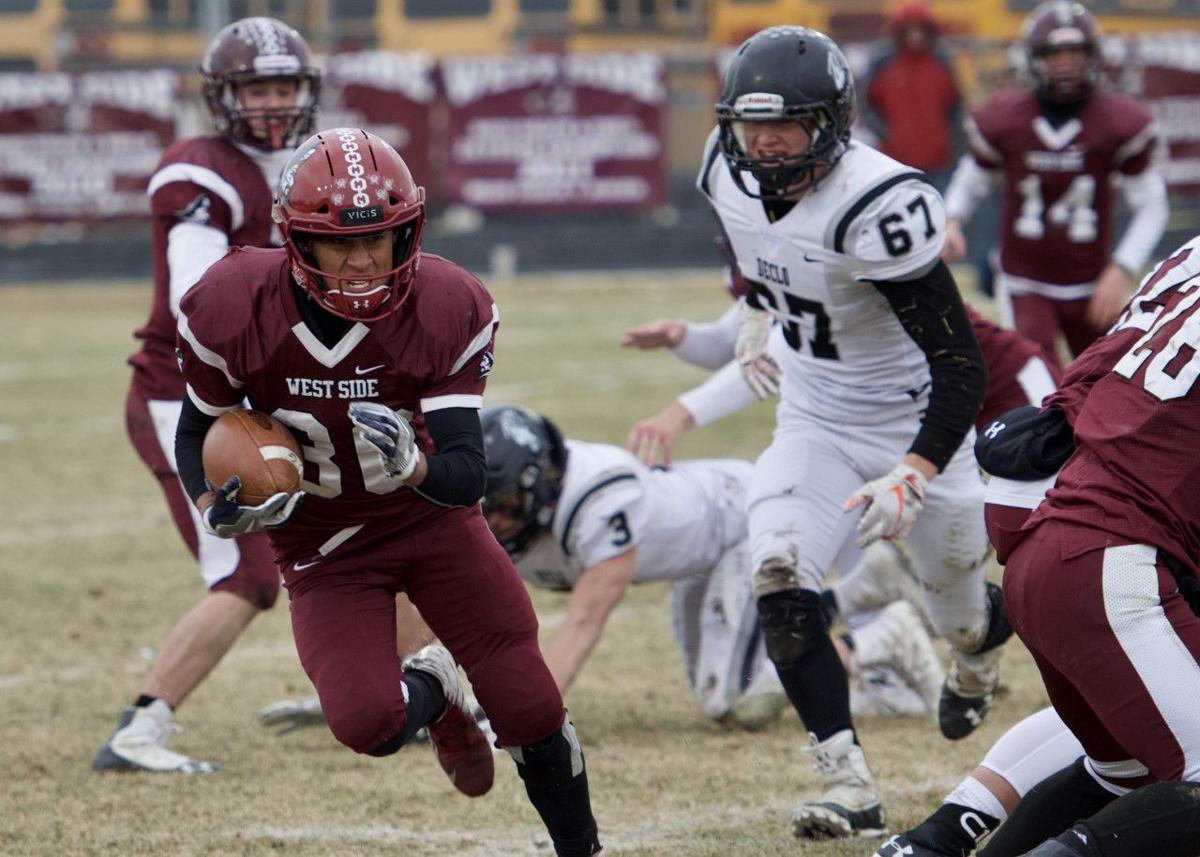 West Side's Cristian Plancarte (30) looks for running room during a 2A state semifinal game against Declo at West Side on Friday. 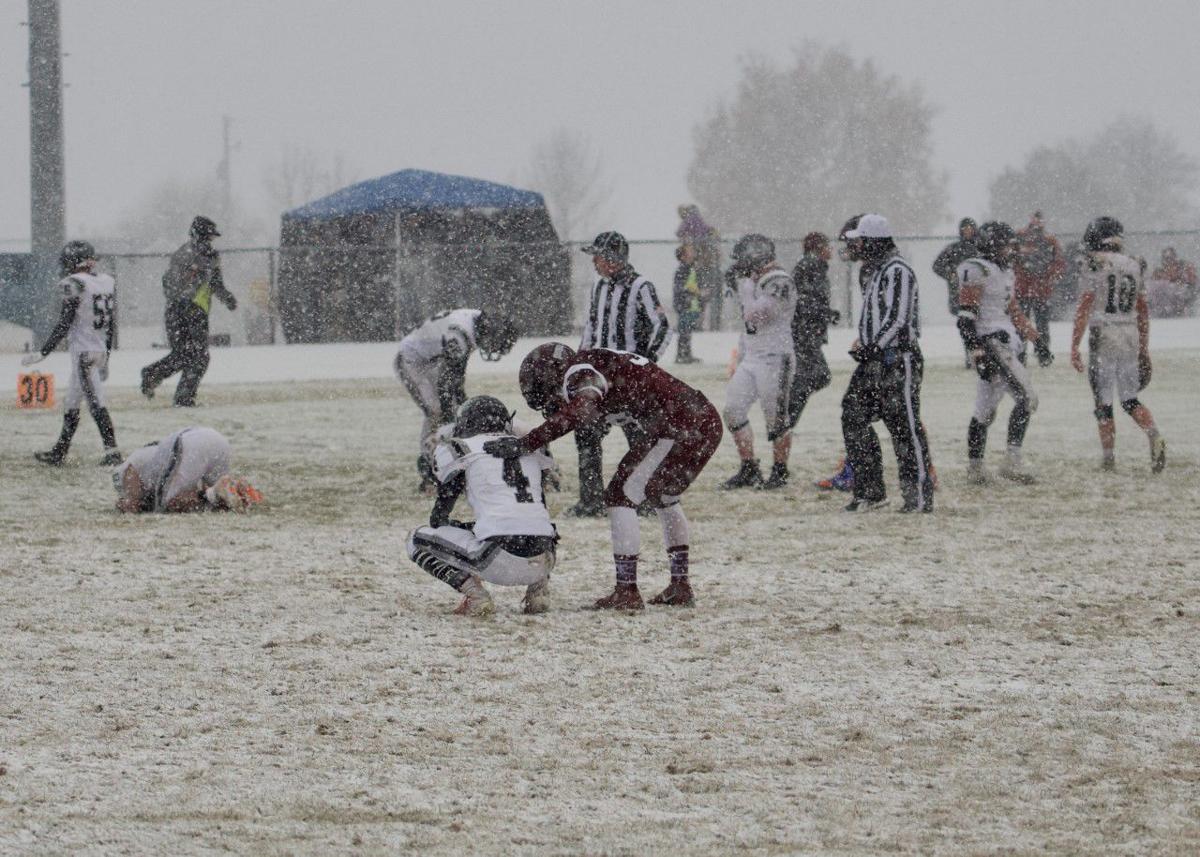 A West Side player consoles Declo’s Kayden Ramsey (4) after the Pirates’ 7-0 in the 2A state semifinals at West Side on Friday.

West Side’s Josh Reeder (11) sprints downfield during the Pirates’ 2A state semifinal game against Declo on Friday in Dayton.

West Side's Cristian Plancarte (30) looks for running room during a 2A state semifinal game against Declo at West Side on Friday.

A West Side player consoles Declo’s Kayden Ramsey (4) after the Pirates’ 7-0 in the 2A state semifinals at West Side on Friday.

DAYTON — After playing each other in the state semifinals twice in the last three years, West Side and Declo capped their trilogy Friday with a finale that would make Hollywood jealous.

There was drama — both on the field, where neither team ever had more than a one-score lead, and off, with West Side trying to to get past the team that had knocked the Pirates out in both 2017 and 2018.

There was a surprising twist — a November snowstorm that blew in during the second half, threatening to stall both offenses.

And there were special effects — fireworks that were touched off behind the goalposts at the end of the game as the Pirates, in true movie narrative form, got their revenge in a flurry of snow and a blast of gunpowder.

Blaize Brown’s 45-yard touchdown run in the first quarter was the only score of the game, giving West Side a 7-0 win and snapping the Pirates’ five-game losing streak against Declo (8-3), a run that included those back-to-back semifinal losses, as well as a state-title game loss in 2013.

Highlights: Declo at West Side football

“It means everything,” senior West Side offensive lineman Jaxon England said. “The goal this week, it was just to beat Declo. We wanted to break that streak. Just thinking about the two years that we got beat by them a couple of years back ... we couldn’t let them do it three times in a row.”

West Side (10-0) will play Firth, which upset North Fremont 7-6 in the other semifinal on a late fumble return, in the 2A state title game next week at Madison. A win would give the Pirates their second state championship in a row and fourth since 2010.

Friday’s game started bitterly cold and windy, with dark clouds hovering over the mountains heralding the snow that was to come.

With the wind at their backs in the first quarter, the Pirates dominated field position through the first couple possessions, eventually turning that into points when Brown, the quarterback, stepped up in the pocket, burst through the middle and broke down the right sideline for a 45-yard score.

“The field position was huge, and we definitely wanted to defer (possession after the coin toss) because they definitely wanted to be able to pick which way we were kicking,” West Side coach Tyson Moser said. “And so, yeah, that field position was huge, and it just felt like we were right there that whole half, pretty much right there on their half (of the field).”

Brown’s score came the possession after a Declo wide receiver fumbled, a constant problem throughout the game for the Hornets, who lost the ball multiple times on fumbles and were also pushed back several times by wild or mishandled snaps.

With the lead, all West Side had to do was not let Declo get on the board, and the Pirates’ defense obliged.

A 26-yard pass from Gabe Matthews to Derek Matthews on a fourth-and-7 — Declo’s longest play of the game — got the Hornets down to the West Side 24 early in the fourth, but they went nowhere on four plays after that, turning the ball over on downs.

Also helping was the snowfall that started just as the teams were taking the field for the third quarter, although snowfall is a bit of a misnomer given the flakes were mostly blowing sideways.

“Well, I’ll tell you (during) this week of practice, it was freezing cold,” England said. “Like, I couldn’t feel my toes, my fingers were frozen. This game, it was nice actually. I could feel all of the limbs on my body. It felt amazing to play in the snow. It was really satisfying to get that win, too.”

West Side’s best chance to get some insurance was in the third quarter, but an 18-yard Josh Reeder touchdown run was called back for a hold and the Pirates eventually turned the ball over on downs.

Declo had one last chance after a late West Side interception, but on the play after the turnover, another snap got past the Hornets’ quarterback and, after a bit of a Yakety-Sax, weaving-while-running-backwards routine, the Hornets ended up with second-and-46 from their own 2-yard line with under four minutes to go, all but ending the game.

The teams combined for 229 total yards of offense, with West Side gaining 118 and the Declo 111. The Hornets ran for just 59 yards on 42 carries.

“Last week I think (Declo had) five touchdowns in 11 plays, so for us to give them no big plays, that’s big, and our defense did a great job,” Moser said. “We threw a little different look at them. You know, I give our defensive coaches credit for that ... but the kids were the ones that had to go out there and execute the plan, and they did it.”

Wesley Millburn had 12 tackles for West Side, with a whopping six for loss. Taze Stegelmeier led the Pirates with 16 tackles, with three going for a loss.

With the win, West Side also ran its winning streak to a school-record 20 games. The Pirates had multiple streaks of 19 games in the past, but had never gotten past that mark.

A time has not yet been set for next week’s state championship game, although it will be on either Friday or Saturday.