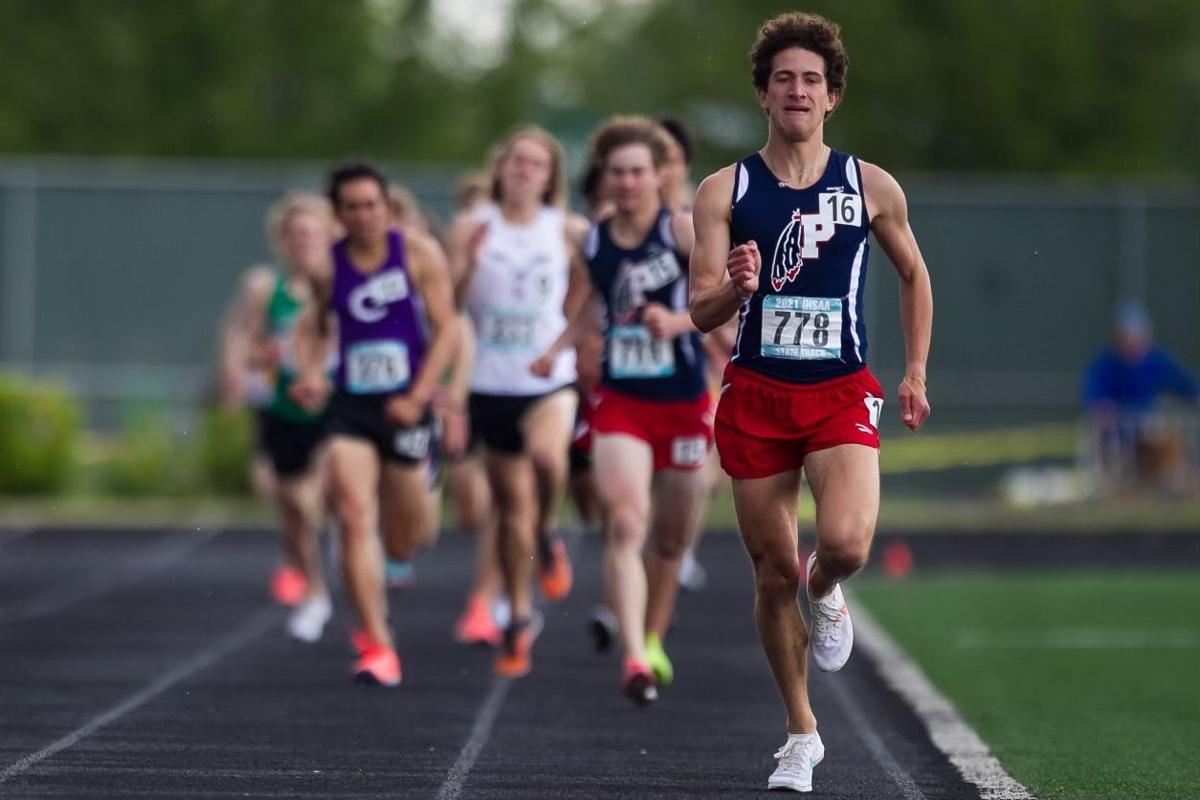 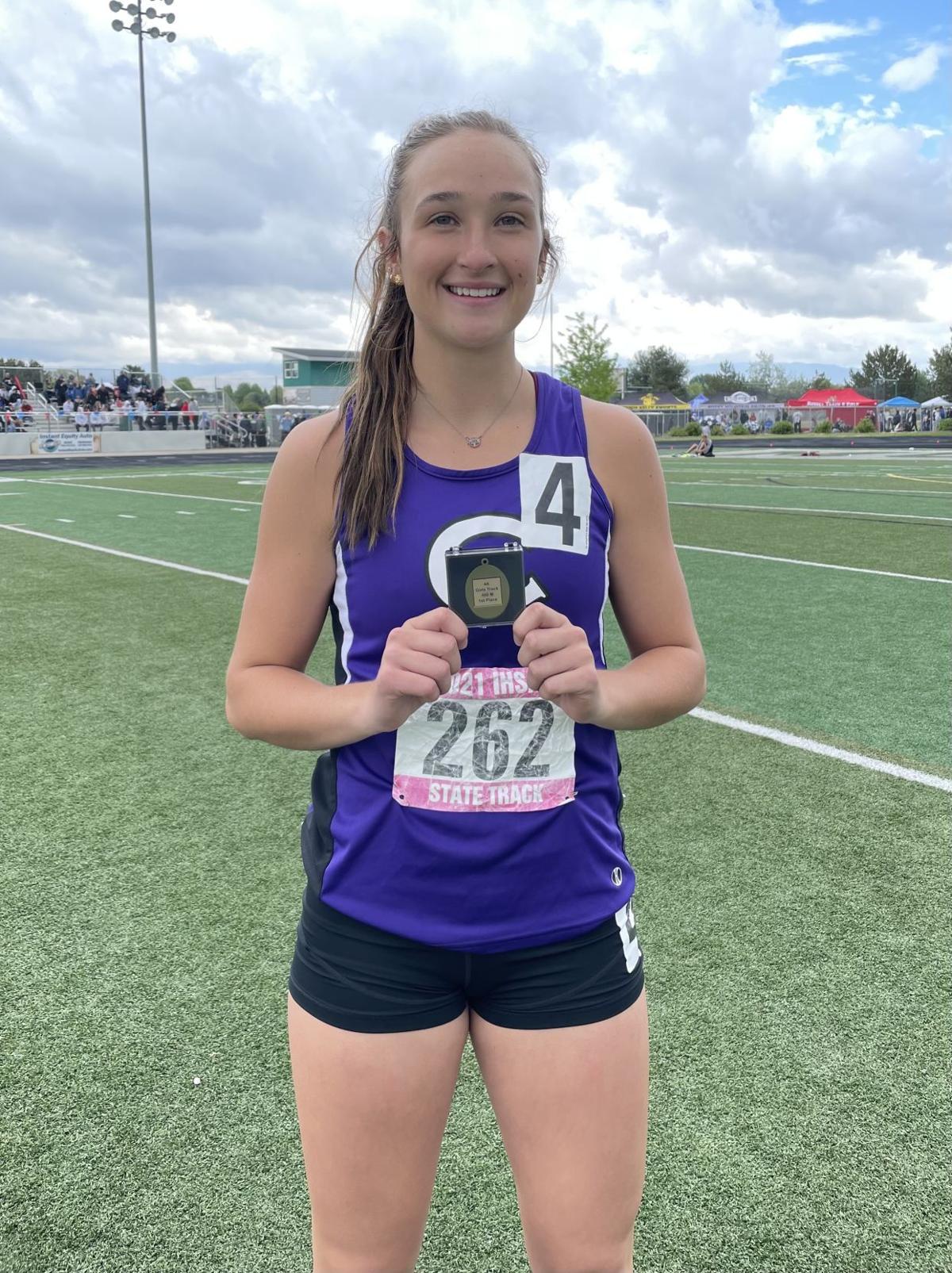 Century's Tenleigh Smith won the 4A state championship in the 400-meter dash on May 22. 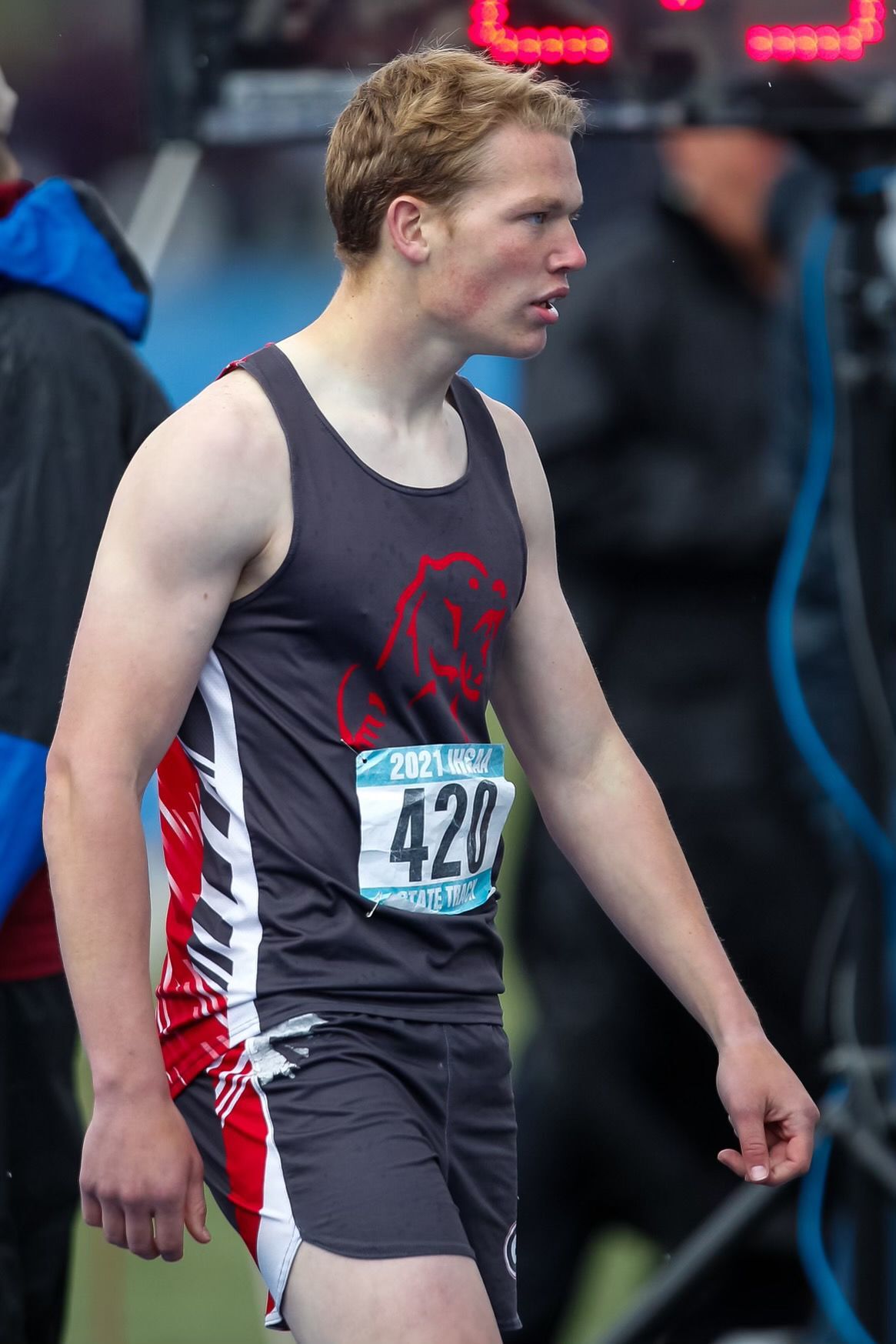 After finishing his leg the 4x400 relay, Trey Draper walks around the track at Middleton High School. 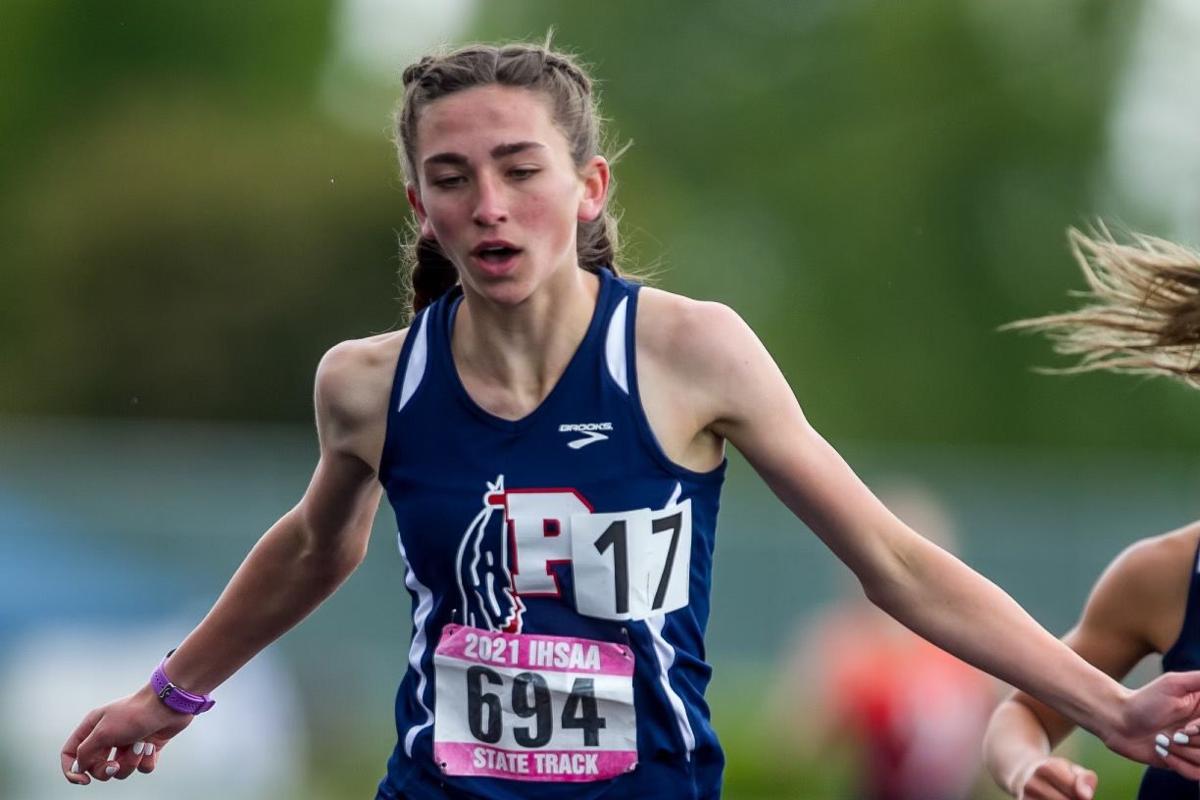 Pocatello freshman Hailey Renzello won the 800-meter race at the 4A state championships with a time of 2:16.28.

Century's Tenleigh Smith won the 4A state championship in the 400-meter dash on May 22.

After finishing his leg the 4x400 relay, Trey Draper walks around the track at Middleton High School.

Pocatello freshman Hailey Renzello won the 800-meter race at the 4A state championships with a time of 2:16.28.

The career of Shane Gard was supposed to end with fireworks, some grand ceremonious observance of the best seasons a local runner has ever had. Instead, it ended with Gard jogging down the home stretch as an in-unison crowd clapped for the only guy still running.

Gard, a Pocatello senior, was seconds away from an illustrious five-feat that would have included the 4A state cross country title as well as track victories in the 3200, 1600, 800 and 4x400 relay. His quest was four-fifths complete when he grabbed the baton. Brevin Vaughan, Krue Hales and Brody Burch had given Gard a commanding lead – and Gard with a commanding lead is water on fire: You know what’s going to happen.

Only this time, Gard didn’t win, he pulled his hamstring with about a third of the track remaining. He fell down and seven other runners passed him while his coaches checked on him. He stood up and began jogging a few minutes later and crossed the finish line to applause – just not the vigorous applause that awaits the winner of the meet’s final race.

“It’s really special to come out here and get three state championships,” Gard said. “I’ve been working my tail off for this since cross country ended and it just feels great when I can put down a goal and achieve it. It didn’t come easy. It’s hard to triple the long-distance events at state.”

The Pocatello girls will also be bringing a trophy back to the Gate City after the Indians placed third. Leading them was a group of youngsters who didn’t seem to be phased by the stage. Freshman Matejah Mangum took second in the 100 and won the 200 in a time of 25:00 — a mark that would have been a meet record if not for too much wind. Mangum helped Poky take second in the 4x200, it’s second top-three relay finish on Saturday.

In the meet’s final event, the Pocatello girls of McKinlee Anderson, Alyssa Covey, Chole Fuller and Hailey Renzello finished the 4x400 in just over four minutes, good enough to take bronze. It was the second medal for Renzello, the Indians’ freshman who won the 800 with a school-record time of 2:16.07.

“You look at her and she always has a smile on her face,” Pocatello coach Richard Call said of Renzello. “She did wonderful today. We had to decide where we wanted to put her. We decided to just put her in the 800 and she did well there in the district and state meet.

Aside from Gard, Mangum and Renzello, the other two local athletes who earned a first-place medal were Century’s Tenleigh Smith and Kiki Baldwin from Highland.

Smith entered Saturday as the fastest 400-meter runner in 4A, but she could hardly cruise to the title on Saturday, Down the final 100 meters, Smith was practically deadlocked with Nampa’s Karly Walker and Preston freshman Elly Jeppsen, and took two powerful strides into the finish line to take first by just over a tenth of a second.

“In that moment, it was just the will to win,” Century coach Bill Vasas said of Smith. “She has been such an example to our younger girls. She shows that you don’t have to necessarily be the fastest — because she was dead even with two girls on the home stretch — but she wanted it more.”

In addition to Smith’s victory, Century’s Myles Guerrero took third in the 800 (1:57.28), the quartet of Myles Gifford, Zac Snow, Jonah Sowell and Jovan Sowell earned bronze in the 4x100 relay and senior Xander Thompson finished in the top five of the 3200, 1600 and 800.

“We got fifth on the boys side and it was close,” Vasas said. “Fifth is the best we’ve scored in a long, long time so I was pleased.”

As for Highland, Baldwin won the 5A girls triple jump with a school-record leap just over 36-feet, 3 inches – coming out of the state meet as the Rams’ only champion.

Others, too, set Highland school records, including 800 runner Hannah Bailey and the Rams’ 4x800 team. Jacob Van Orden bolted to a second-place finish in the 800 at 1:53.79. That was the second-fastest time in Idaho this year, 76-hundredths of a second behind the winner, Idaho Falls senior Zac Bright.

“Those girls are dedicated,” Highland coach Camille Long said. “They show up every day and do everything I ask them. They come with the goal to get better and I think that’s what sets them apart. It was a surprise for them to place in the top three but not to me. Their bodies knew what to do, they just had to let their brains allow them to do it and realize that they belonged there.”

Marsh Valley junior Maycee Lunt was the lone local champion in at the 3A meet. The junior sprinter ran a 12.78-second 100-meter dash, beating her competition by more than two-tenths of a second.

Lunt also won the long jump and finished third in the 200.

On the boys side for the Eagles, senior Dane Wissenbach — who tore his ACL in September playing football — ran his best 100 time of the season (11.23) and took third.

American Falls’ standout was senior Emma Barclay – best known locally for her incredible volleyball talent. Turns out, the jumping ability transfers well to the track. The uber-athletic Barclay took third in the 300-meter hurdles with a personal-best time of 49.02.

The only athlete from Snake River to place in the top-three was Morgan Sensenbach, who jumped more than 16-feet, 2-inches to earn silver in the 3A girls long jump.

The Aberdeen girls finished second and the West Side boys third in the 2A state track championships, which wrapped up Saturday.

Yasmin Ortiz won the 100-yard dash and Liliana Ortiz the 100 hurdles for the Tigers, who finished with 63 points, well behind Melba, the winner, but one point ahead of third-place Orofino and two ahead of fourth-place Firth.

The two Ortizes also ran the final two legs of a winning effort in the 4x100, which also included Courtney Phillips and Emerita Carrillo.

Third-place finishes in both the 4x100 and 4x200 relays were the highlights for the Aberdeen boys.

For West Side, Ashlyn Willis won the 800 and Aubrie Barzee the 1600. Kynlee Beckstead was third in the pole vault

Hayden Robinson finished third in the triple jump for the West Side boys, and Josh Reeder was third in the 400.

For Soda Springs, freshman phenom Jinettie Garbett won the girls 400. Scott Hunsaker was third in the 100, and Kelson Smith third in the mile.

The Cardinals’ girls finished second in the 4x400.

Brynlee Bastian finished second in the 800 for the Malad girls. Rylee Jacobsen took third in the mile, the same as her result from the 3200 on Friday.

Elise Kelsey took second in the mile for Bear Lake.

Behind Trey Draper and Cole Wilkerson, the Grace boys team finished in fourth place, coming in just a point shy of third-place Victory Charter and 10 points shy of Raft River for second in 1A.

Draper was also on that medley team that took first but was also impressive individually. The Grace senior placed third in the 200 and ran the 400 in just under 52 seconds to take second.

The other standout from the Grace boys was hurdler Joshua Smith, who took silver in the 100-meter hurdles (16.22).

Elsewhere in 1A, North Gem’s Elizabeth Michael hurled the discus over 107 feet and finished second.

CORRECTION: An earlier version of this article stated that Jacob Van Orden broke the Highland school record in the 800 at this weekend's 5A state track championships. While Van Orden's time of 1:53.79 is the second-fastest time in school history, the record still belongs to Marty Stroschein, who ran 1:52.3 in 1985.