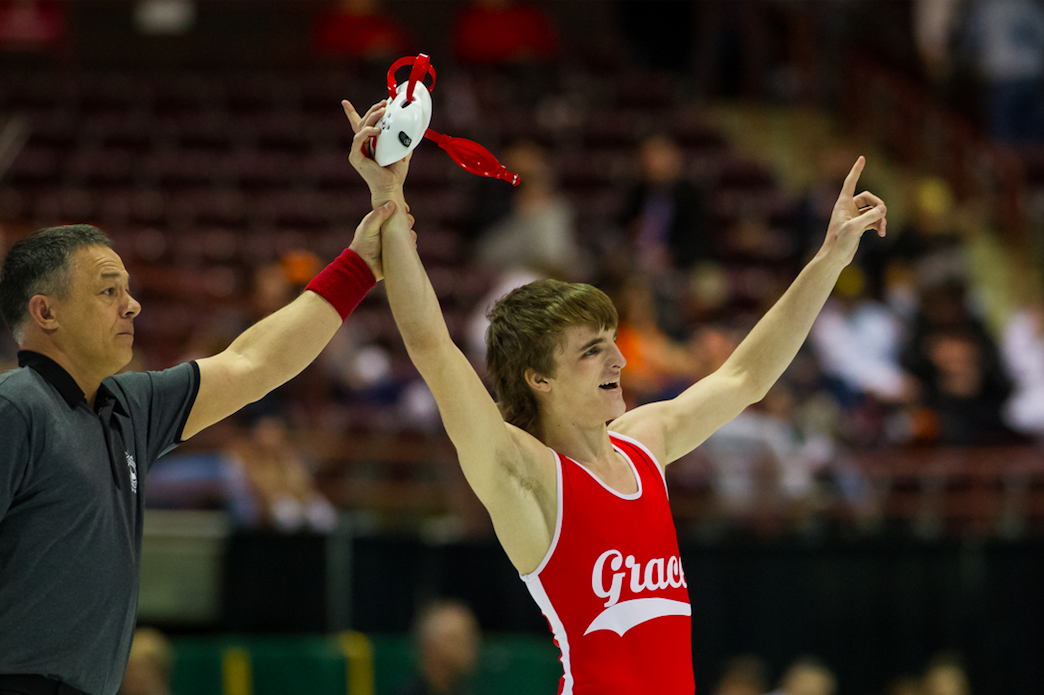 Grace senior Rhet Jorgensen gets his hand raised after pinning Declo’s AV Marino in the second period of Saturday's 2A 138-pound final. 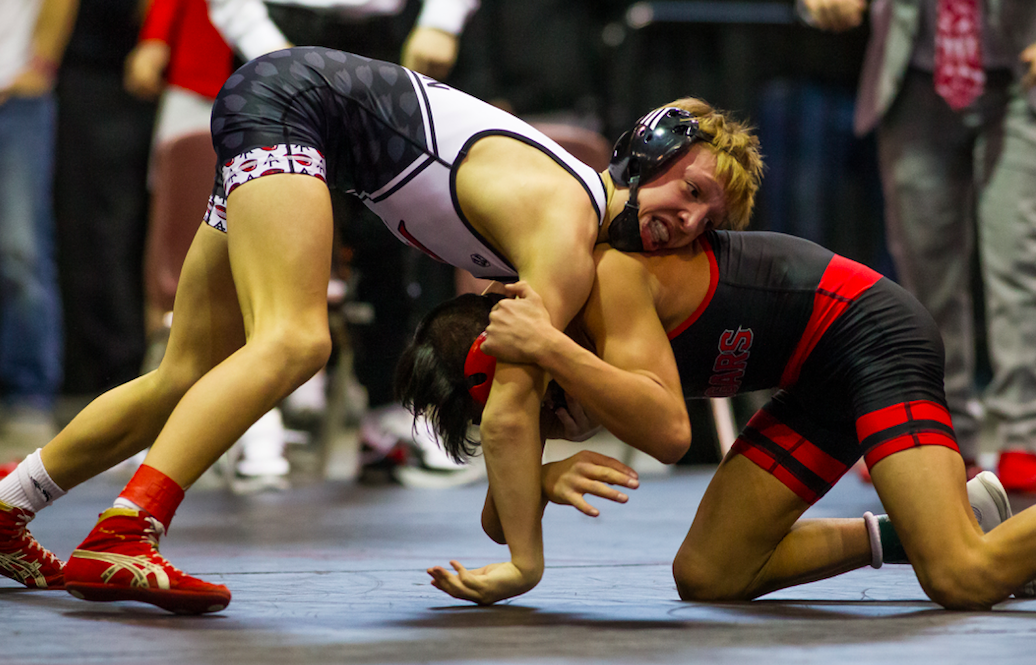 American Falls' freshman Kolter Burton (Left) uses his leverage against South Fremont's Jaxton Parker (Right) during the 3A 98-pound final on Saturday. Burton would go on to pin Burton late in the third period to get the victory. 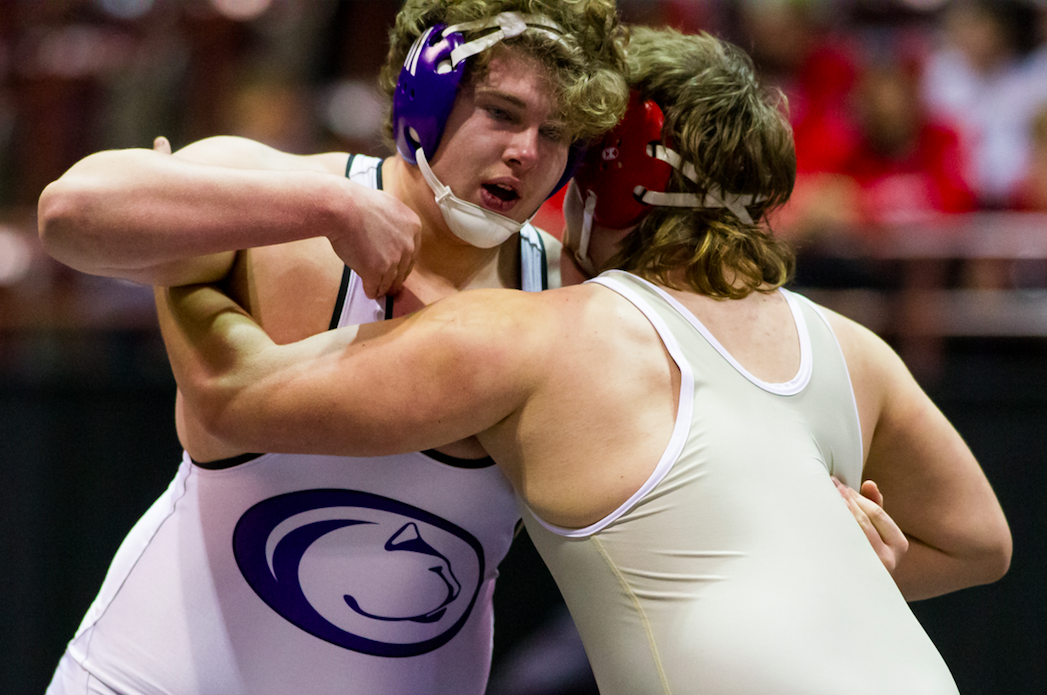 Snake River senior Nicholas Parris (Left) grapples with Weiser's Jesse Lockett (Right) during Saturday's 3A 285-pound final. Parris would go on to capture the state title with a 10-5 decision.

Grace senior Rhet Jorgensen gets his hand raised after pinning Declo’s AV Marino in the second period of Saturday's 2A 138-pound final.

American Falls' freshman Kolter Burton (Left) uses his leverage against South Fremont's Jaxton Parker (Right) during the 3A 98-pound final on Saturday. Burton would go on to pin Burton late in the third period to get the victory.

Snake River senior Nicholas Parris (Left) grapples with Weiser's Jesse Lockett (Right) during Saturday's 3A 285-pound final. Parris would go on to capture the state title with a 10-5 decision.

Grace’s Rhet Jorgensen did not have a unique dream. Every wrestler executes their first cradle or pins their first helpless opponent and wants to be a state champion. Willing that into existence is always a bit tougher. Especially when you’re a senior and haven’t even finished in the top three at state.

Jorgensen was supposed to win on Saturday. He was ranked no. 1 in the 2A 138-pound weight class and the top seed in Nampa. No one was surprised when the Grace senior pinned Declo’s AV Marino in the second period of Saturday’s final match.

Still, there’s something special about a kid making his dream come true. All the sacrifices, the hard days, the brutal defeats, it all seems worth it because, well, it all led to a state championship.

Half an hour after his dream came true, Jorgensen pulled out his phone, scrolled through his camera roll and found the video of his freshman self. He was wrestling at 113 pounds, an imposter compared to the Rhet Jorgensen who just won a state title.

“I wanted to see for myself just how different it was,” he said. “Freshman year, I was timid. Not ready. Not that physical. Senior year, I just came out ready to hammer.”

Watching that video is the entanglement of everything wrestling coaches are after. The sport, to most veterans, is not about results. It’s about the technique, the craft. It’s about how hard someone is willing to work to reach their goal, and how they respond when they don’t. Watching it all back compounds that.

Jorgensen looked at himself in that video. Rather, a naive version of himself. The senior Jorgensen watched his past self on a small screen and knew that kid was going to be a state champion. He also knew his 113-pound-self had no idea how hard it was going to be.

“Rhet definitely worked on his craft,” Grace coach James Newby said. “Basically he had some moves that he was really good at and he got really good at them. People couldn’t stop them. He kept working at it, working at it and that’s what happens when you work in the offseason, get in the weight room and do what you need to do.”

Grace won its second-straight 1A title and finished fifth in the 2A classification on Saturday, producing three state champions in Jorgensen, sophomore Hans Newby and senior Clayton Lunt.

Newby finished off his undefeated 44-0 season with a 10-0 decision in the finals, winning his second-straight state championship.

As for Lunt, his second-period pin of Raft River’s Tegan Whitaker provided a duality of emotions. He celebrated the state title and couldn’t help but thinking of his friend who wasn’t there to see it.

“I was wrestling for a buddy (Traedon) MacPherson we lost this season. It was just a really special moment,” Whitaker said. “He was from Bear Lake High School and died in a car accident … (Winning) was everything you could imagine, plus more.”

American Falls’ coach Nathan Gugelman doesn’t often get emotional at wrestling matches. He’s been around it long enough to grasp the ebbs and flows of the sport, to not get caught riding the emotional rollercoaster on the mat.

“Ill be honest, that one was an emotional moment. That one got me,” Gugelman said. “That one was really special to me. I’ve been with Kolter for a long time. We knew he was going to anchor the weight class.

“His dad’s been with me through it all. We’ve traveled the country together. That was a special moment for me, for sure. That’s one I’ll never forget.”

Gugelman has been coaching Burton since the latter was in the fourth grade. Back then, Gugelman was an assistant coach at Aberdeen, coaching the Tigers’ wrestlers and training some of the area’s best youngsters, like Burton.

Three years ago, Gugelman took the job at American Falls. For a second, it looked like he and Burton may never work together again. Then ...

“They sold their house and moved to American Falls,” Gugelman said.

Added Burton: “It was hard at first to go to a new school and meet new people but I learned to overcome that and now I love it here.”

And now he’s a state champion, one of two Beavers along with sophomore Grayson Williams, the 106-pound no. 1 seed who beat Teton’s Remy Baler by a 2-0 decision in the final to take gold.

After finishing fourth last season, Saturday’s victory was a bit of redemption for Williams. But the biggest obstacle he overcame was his weight. Because Williams hit a huge growth spurt this season, maintaining his 106-pound frame wasn’t easy.

“It was really hard,’ he said.

Added Gugelman: He would do our 6:30 in the morning practices. He would run at lunch hour every day (on the treadmill in the wrestling room). He would go home and run at night. He was pulling four-a-days. It was a big moment for him to see all that payoff.”

For a school that has taken home a state trophy each of the last 11 years, a measly third-place award doesn’t seem like it would hold much weight. Expect for this year.

“To be honest, I’ve never felt better about getting third place,” Snake River coach Jeff Gardner said. “3A was loaded this year … We had our share of disappointments but, at the same time, we had some kids rise to the occasion, too.

Richardson was expected to win on Saturday. The senior who signed a wrestling scholarship with Nebraska Kearney a few months ago was a defending state champion. The chances of a repeat seemed all but a lock until he got down 5-2 against Sugar-Salem’s Skyler Larwill in the first period.

“Oh that scared the crap out of us,” Gardner said. “You can never relax (against Larwill). I knew what we were in for … My heart was in my stomach. But Kyle, he clawed his way back. He was down 5-2 against a good kid and he stayed patient. I was proud of him, he got it done.”

And then there’s Parris, who is perhaps the polar opposite of Richardson. When Parris first began wrestling as a freshman, he worked his tail off but won just a handful of matches. He had all the heart but needed to refine the skill.

Gardner, though, can already see it. He’s going to be talking about Parris to every young kid going through struggles. Four years after he had a tough time winning a single match, Parris became a state champion.

“He’s a great story. He’s one of the best kids I’ve ever had,” Gardner said. “He came in and knew nothing. Some kids start when they’re 5 … With no wrestling experience, to start as a freshman and win a state tournament, I’ve never had that.”