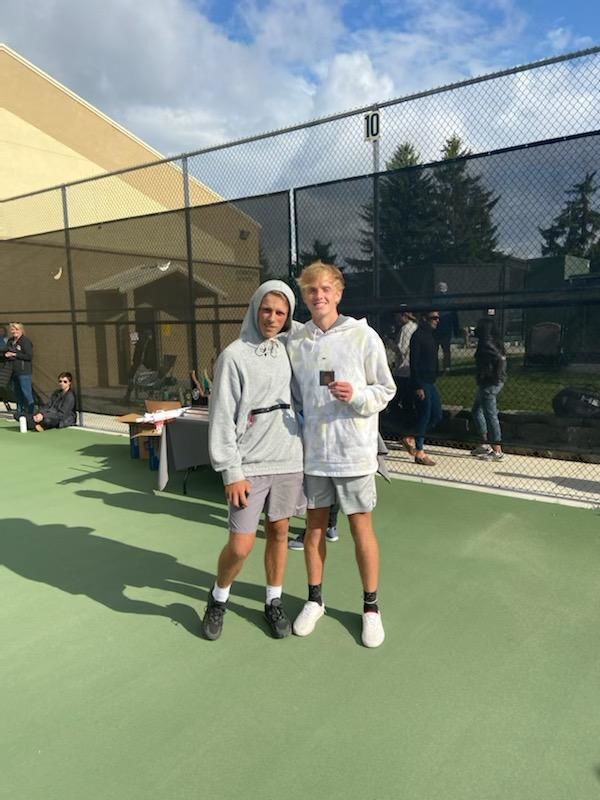 Century’s Scott Holmstead (left) and Aidan Horrocks after winning third place in boys doubles at the 4A state tennis tournament. 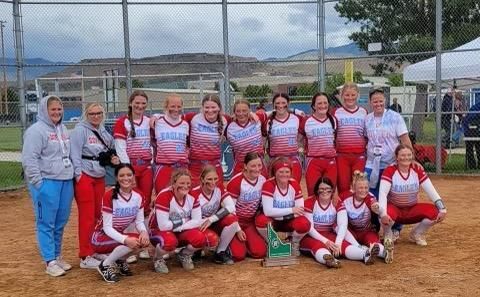 Century’s Scott Holmstead (left) and Aidan Horrocks after winning third place in boys doubles at the 4A state tennis tournament.

At Fruitland, Marsh Valley dominated South Fremont to win the 3A consolation championship.

The Eagles led just 4-3 after four innings, but scored five runs in the fifth to pull away.

Andrew Anderson doubled and drove in five runs from the leadoff spot for the Eagles.

After losing its first-round game to Weiser, 12-10, on a walkoff three-run homer, Marsh Valley won its next two games by a combined score of 28-5 to take the consolation title.

The Eagles finished the year with a 26-1 record.

At Fruitland, Snake River lost the third-place game to Kimberly.

The Panthers played Kimberly even every inning except the third, when the Bulldogs put up six runs.

At Skyview Park in Nampa, Century’s state tournament ended with a loss in the 4A third-place game.

The fourth-place trophy the Diamondbacks won is the first in progrUam history.

Alison McAnulty doubled and drove in three runs for Century, which had lost 19-2 to Vallivue in its first game at state.

“We competed today,” Century coach Bruce Givens said. “They started figuring it out. The first game, they had some nerves because none of them have been to state.”

At Timberline, a wild victory in the first game of the day put Marsh Valley one game away from playing for a state title before the Eagles ran out of gas against Filer.

Still, Marsh Valley ended up with the third-place trophy.

“As a first-year coach, it was super exciting to see the future with how young my team is, and I’m super proud of them for putting up a fight,” Marsh Valley coach Kenzie Van Sickle said. “I don’t think anyone expected little old Marsh Valley to come to state and take third place, and now we know we can compete with anyone in the state.”

Ellee Anderson smashed a walk-off grand slam against Timberlake as the Eagles put up six runs in the bottom of the seventh for a comeback win.

That came just a few innings after Anderson turned a triple play by catching a line drive up the middle, touching second and firing to first to catch the runner trying to get back.

“What a crazy game. Just a back-and-forth game,” Van Sickle said. “We had a triple play. It was a critical moment, they had been hitting the ball. It was something that we needed.”

The Eagles then hung with Filer, trailing just 5-4 until the Wildcats put up five runs in both the sixth and seventh innings.

“We just fought so much,” Van Sickle said. “Such a great pitching showcase for Libbie Larsen, we rode her arm until it fell off. We kind of ran out of gas a little bit at the end.”

Marsh Valley finished the season with a 17-8 record.

Highland’s girls doubles team of Claire Fellows and Drew Simmons had to deal with a lot at the 5A state championships this weekend.

Not only were Simmons, a sophomore, and Fellows, a freshman, making their first-ever appearances at state, the 5A state tournament was held outside, which meant they had to deal with the vagaries of the damp weather that plagued the Boise area this weekend.

“It was really hard to refocus, because we had so many starts and stops because of the rain,” Highland coach Ron Osborn said. “We had to drive to the hotel, sit in the lot for three hours and then get ready to play.”

Then Simmons and Fellows had to play the No. 1 overall seed, a team from Boise High, in the first round.

But after losing that match, the young Rams ran off four wins in a row to make it to the consolation championship, where they lost to Boise’s No. 2 team to take fourth place.

“They played amazing, they went on a great run,” Osborn said.

Horrocks and Holmstead beat Blackfoot and Wood River to get to the semifinals, where they lost to a team from Vallivue.

They then beat Bonneville to make it to the third-place match, which was tied 7-7 before Horrocks and Holmstead won the tiebreaker set 7-5.

“It was just crazy because it rained the whole time,” Century coach Sean Kane said. “They just played really aggressive doubles. They got to the net. They’re like best friends off the court and have a good, easy-going vibe. When it’s time to go to work, they get serious. Their style was the most aggressive style by far and Aidan had one of the best serves in the tournament.”