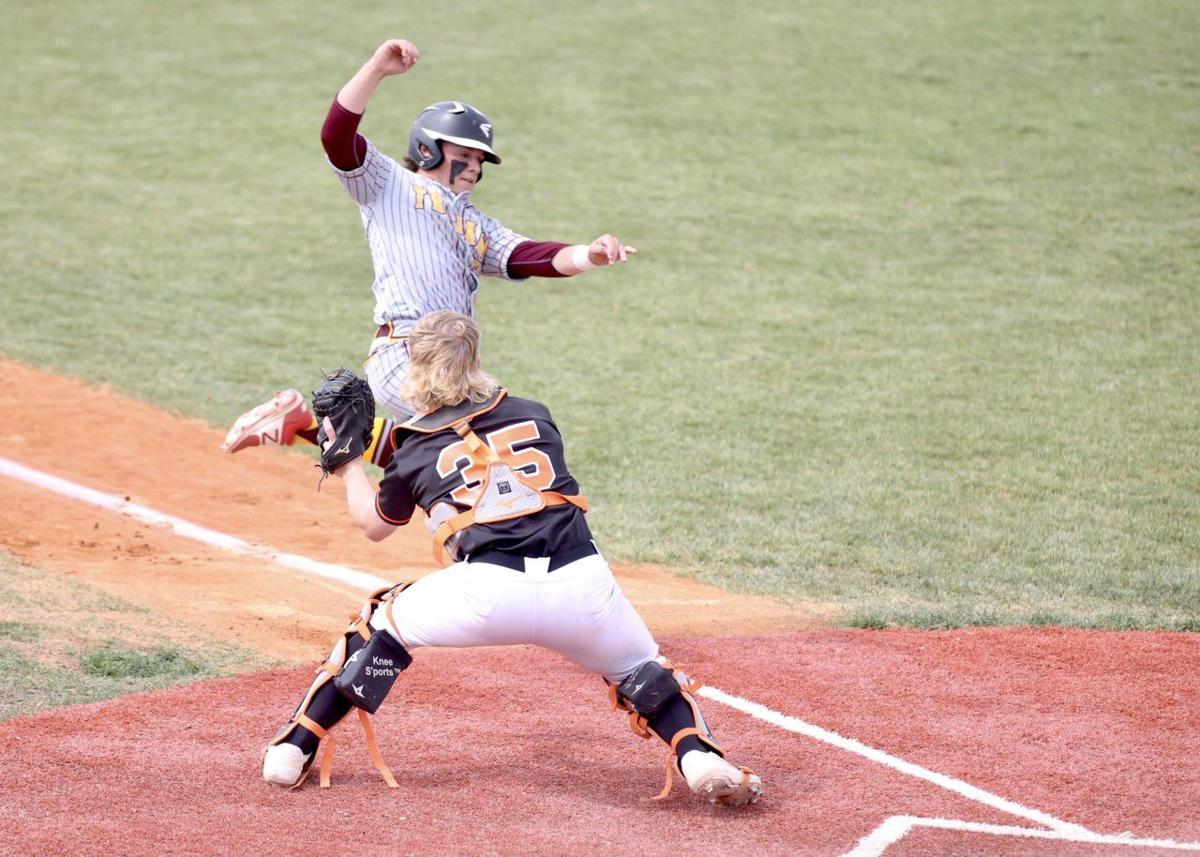 Malad catcher John Evans (35) applies the tag to a Nampa Christian baserunner in the fourth inning of the 2A state championship game Saturday at Halliwell Park in Pocatello. 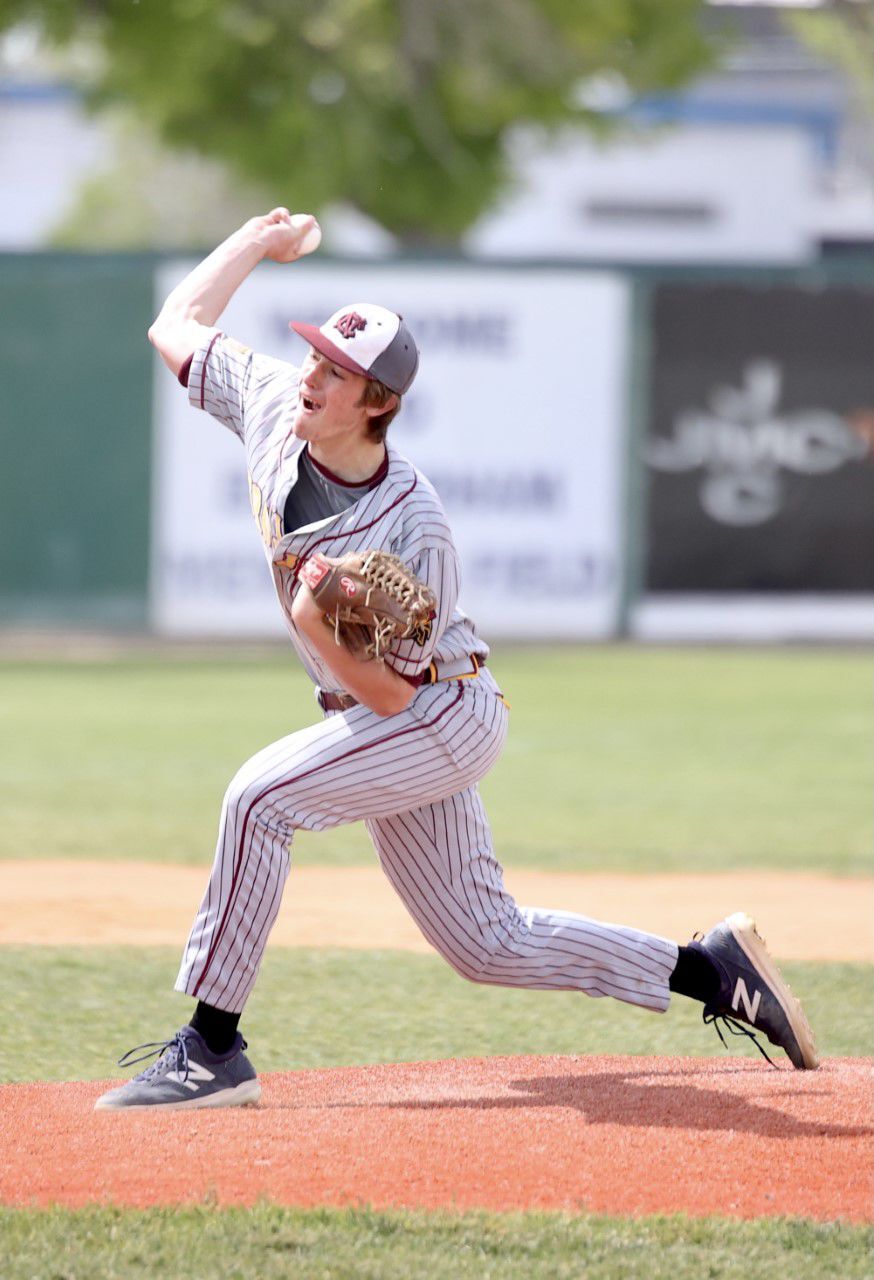 Nampa Christian pitcher Carson Atwood delivers to the plate during the 2A state championship game against Malad on Saturday at Halliwell Park in Pocatello. 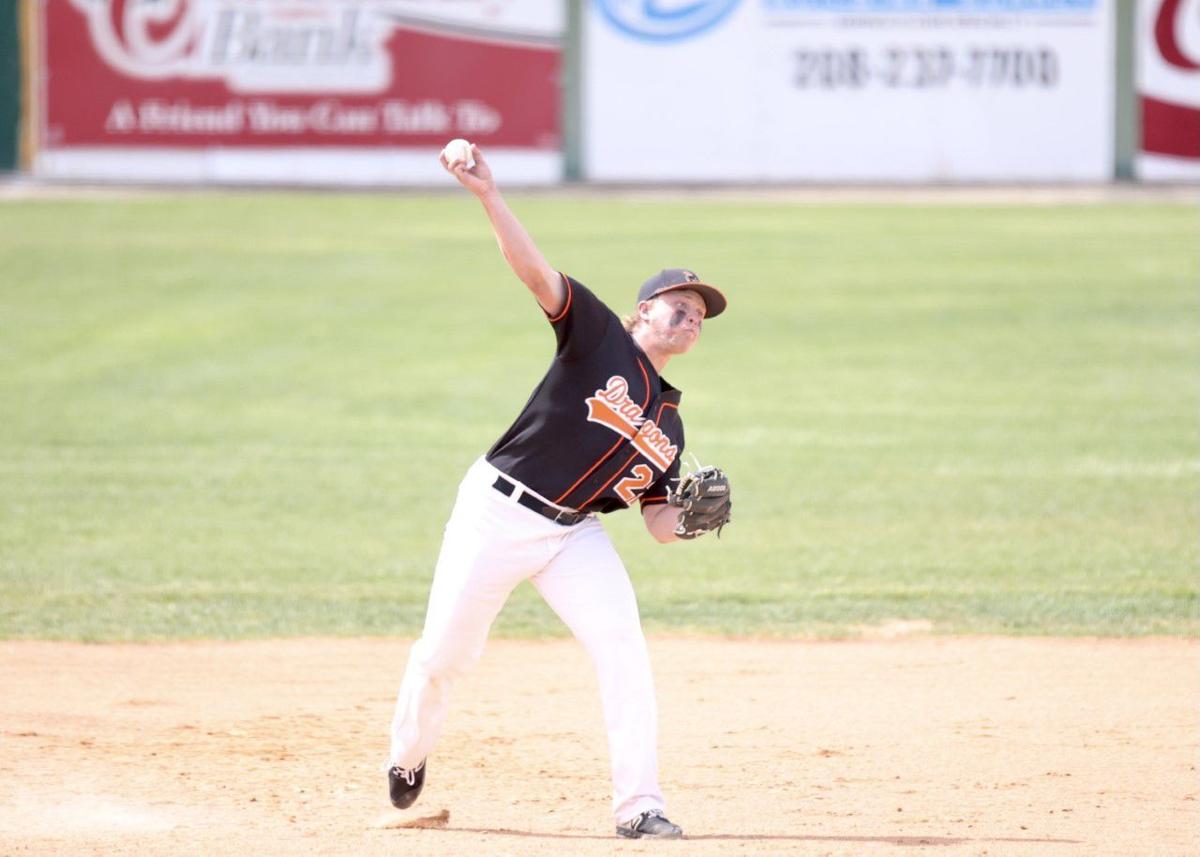 Malad third baseman Tanner Olsen throws across the diamond during the 2A state championship game against Nampa Christian on Saturday at Halliwell Park in Pocatello.

Malad catcher John Evans (35) applies the tag to a Nampa Christian baserunner in the fourth inning of the 2A state championship game Saturday at Halliwell Park in Pocatello.

Nampa Christian pitcher Carson Atwood delivers to the plate during the 2A state championship game against Malad on Saturday at Halliwell Park in Pocatello.

Malad third baseman Tanner Olsen throws across the diamond during the 2A state championship game against Nampa Christian on Saturday at Halliwell Park in Pocatello.

POCATELLO — It’s not that he wasn’t expecting it, especially against an undefeated Nampa Christian team, but when Malad coach Bo Clark saw Carson Atwood warming up to start to the 2A state championship game for the Trojans on Saturday, he knew that his team’s margin for error had just shrunk substantially.

Atwood, a junior who’s probably about 6-foot-8, looks more like a stretch 4 than a baseball player. In Nampa Christian’s team photo, he’s a full head taller than any of the teammates standing next to him — not to mention Trojans head coach Marc Harris, standing directly in front of Atwood with the tippy-top of his ballcap barely reaching up to his ace pitcher’s collarbone.

When Atwood unfurls his lanky frame, it looks like he’s releasing the ball about halfway to the plate. That plus upper-80s heat makes Atwood’s fastball is one of the toughest looks in the state, and that’s not all that makes him difficult to hit.

In the end, after seven tense innings at Halliwell Park, Atwood was too much for Malad, throwing a two-hitter as Nampa Christian won its fifth state title since 2015.

But Malad sure didn’t make it easy for the Trojans. The Dragons limited their mistakes. They took advantage of their few opportunities. They frustrated a Trojans team that could have broken the game open in seemingly every inning.

Malad was outhit 7-2 for the game. The Dragons didn’t get their first hit off Atwood until the sixth, when Traven Ward’s bunt single was followed by a stunning two-run double to the right-center gap by Kyler Horsley.

Meanwhile, Nampa Christian put multiple runners in every inning except the third and the seventh. But Tanner Olsen, who relieved starting pitcher Dillon Evans for Malad, got out of two separate bases-loaded, no-out jams with just three runs scoring, Grady Combs stole a run in the first after working a walk, and Horsley’s out-of-nowhere double cut the Trojans’ lead to 4-3 going to the seventh, giving the Dragons a chance to tie.

Combs, who reached base all four times against Atwood, walked and stole second with two outs.

Tanner Olsen fouled off multiple pitches before lining a hard ground ball to Nampa Christian second baseman Josh Tiersma, who made the play at first to end the game and add another trophy to the Trojans’ cabinet.

“We had a hard ball, a shot up the middle. They just had him played right,” Clark said. “Most other days, that’s a base hit and we’re tied. Today, they had it played right. ... I’m not disappointed in (my players), just disappointed for them. They fought. They never gave up.”

After the game, Harris gathered his team on the pitcher’s mound for a moment of prayer.

His Trojans team hadn’t faced much adversity on its way to an undefeated regular season, winning 20 of its first 24 games by more than five runs.

But in the semifinals on Friday, the Trojans needed a walk-off hit-by-pitch to beat Declo 4-3 and advance to the championship game.

On Saturday, they needed every bit of Atwood’s stellar performance to beat Malad by the same score.

“At the very beginning of the year, the very first practice, we talk about setting the stage, and how great it is to go walk up on the mound,” Harris said. “We’re praying, we’re giving it back to God. I tell them that it’s not ours, it’s His. That’s kind of a tradition that’s gone back. We’ve been at state 26 straight years, and we’ve won several, and that’s our tradition, to go stand on the mound.”

For Atwood, who had moved to Nampa from Kansas City just before the season, the moment was even more important.

“It helped a lot with sports, being able to bond with the guys, instead of just being at the school,” Atwood said. “That’s the most special moment I’ve had playing baseball. Getting to hug my great catcher, Dane (Bradshaw), and the great defense behind me, we all just got to be together and celebrate it.”