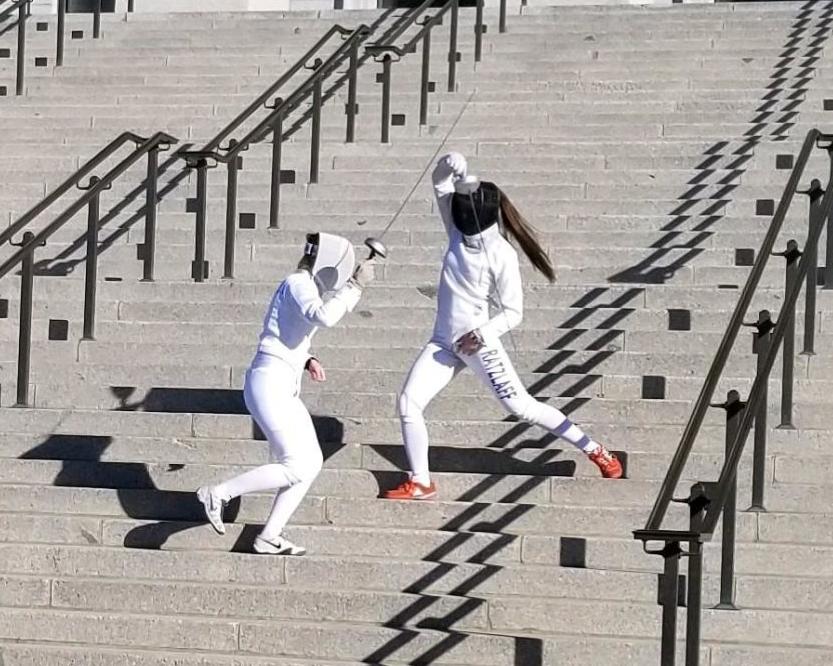 Josie Ratzlaff (right) fences an opponent on the steps of the Utah Capitol building as part of a series of promotional photos for a tournament in Salt Lake City. 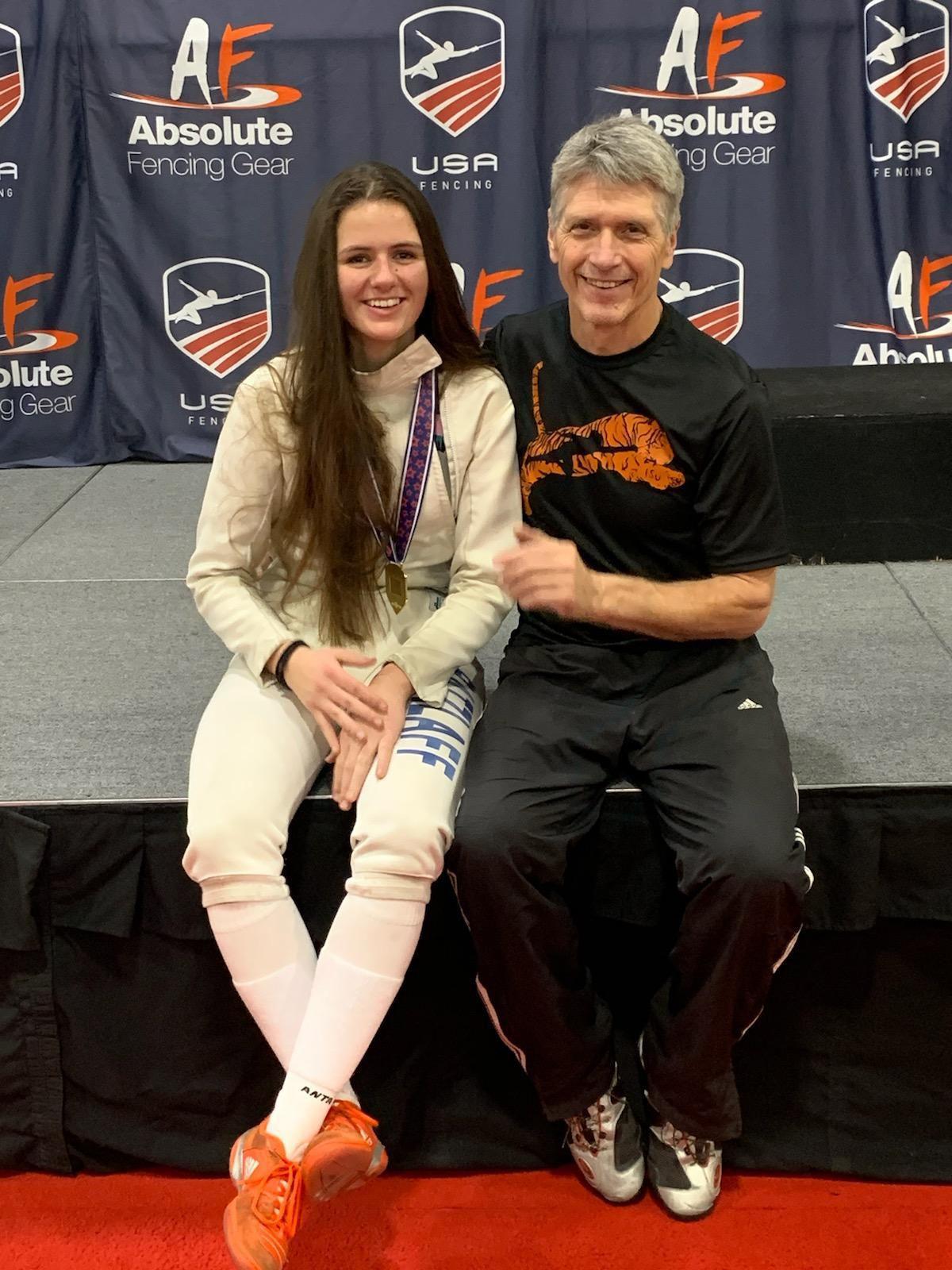 Highland’s Josie Ratzlaff poses with her coach and grandfather Phil Leavitt after medaling at a fencing tournament. 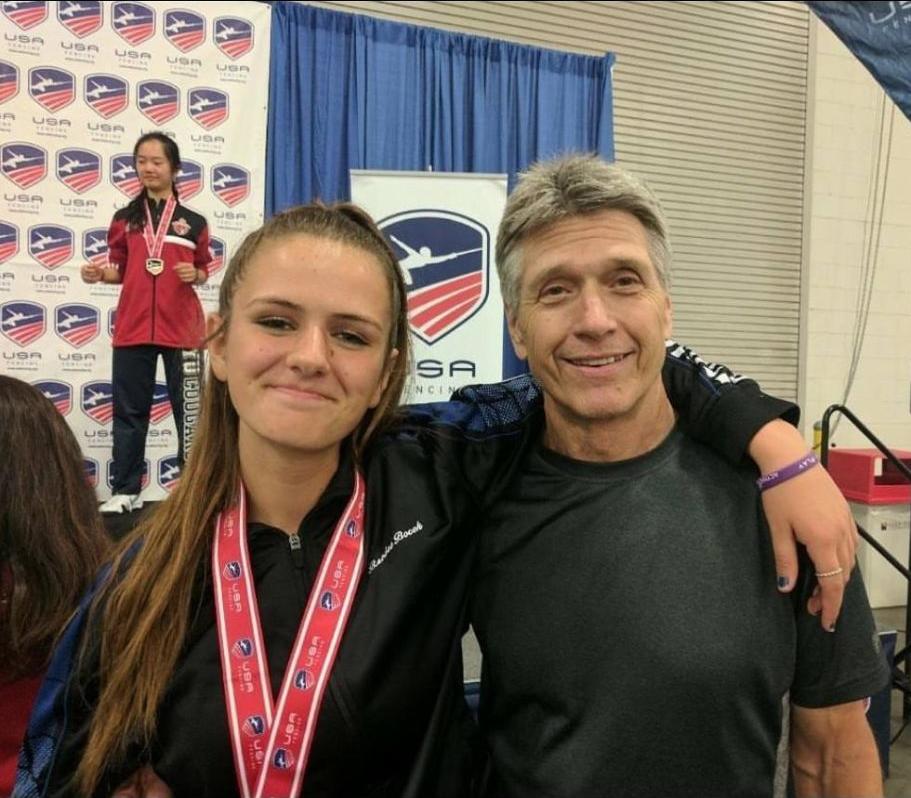 Josie Ratzlaff poses with her coach and grandfather Phil Leavitt after her first national tournament in 2016.

Josie Ratzlaff (right) fences an opponent on the steps of the Utah Capitol building as part of a series of promotional photos for a tournament in Salt Lake City.

Highland’s Josie Ratzlaff poses with her coach and grandfather Phil Leavitt after medaling at a fencing tournament.

Josie Ratzlaff poses with her coach and grandfather Phil Leavitt after her first national tournament in 2016.

Josie Ratzlaff has big dreams — the Air Force Academy, definitely going into space one day, and maybe the Olympics somewhere in there too?

Ratzlaff, who graduated from Highland in the spring, is heading to Air Force in the fall as a blue-chip recruit for the Falcons’ fencing team. A blue-chip recruit is one that the coach specifically targets, and the designation means she’s guaranteed a spot on the team. She’ll also study engineering at the Academy, with the hope of being an astronaut one day.

On an national level, Ratzlaff is ranked 26th in the country in the most recent USA fencing rankings for junior women’s epee.

“She was a bit of a prodigy,” said her grandfather and coach Phil Leavitt. “She’s been fencing for about five years, and everyone that’s in that kind of position has been fencing for 10 years or more. She’s come up very, very fast, has certainly taken the sport by surprise. ... I think you’re looking at somebody who, with the support of Air Force, because they will train her, you could be looking at an Olympian in four years.”

That’s a heady proclamation, but Ratzlaff’s ascent has certainly been rapid — and it came about because of an injury.

When she was heading into her freshman year at Highland, Ratzlaff suffered a series of concussions that left her unable to play volleyball.

With her desperate to find another sport to play when she recovered, her parents gave her a choice — basketball or...fencing?

It wasn’t a random decision — Ratzlaff’s family is the first family of Pocatello’s fencing community. Leavitt picked up the sport around 20 years ago and now coaches at the Pocatello Fencing Club. His three sons have all won national-level medals, as did a cousin of Ratzlaff’s.

So it wasn’t an option out of the blue — and it wasn’t really a choice either.

The road to that position started with another parental ultimatum. Years ago, Leavitt and his wife told their three sons that they could play sports — but they all had to pick the same one.

They chose fencing, and Leavitt — “not much of a spectator-sport guy,” he said — started learning right along with them.

Under the tutelage of Dean Rose at the Pocatello Fencing Club, he fell in love with the sport.

“It’s a great disciplined sport,” Leavitt said. “You don’t see just physical attributes dominating fencing. So much of it is skill and mental control, plus behavior is strictly controlled in fencing. You don’t have bad sportsmanship, it’s just not allowed. It’s a very, very good game, and people can play it for their whole lives.”

Ratzlaff, who’d played sports her whole life, had the right physical attributes right away, but picked up on the mental side quickly as well. There are three weapons in fencing — foil, saber and epee — and she chose epee, in which the opponent’s entire body is a fair target but points can only be scored by stabbing with the tip of the blade.

She medaled in her division at her first national tournament. Rankings in fencing are given out based on tournament results, and go from E, the lowest, to A, with numbers attached for the year in which they were accomplished.

Ratzlaff achieved a B ranking in 2018 before jumping to the A level in 2019. She didn’t have a chance to get her A20 before the coronavirus pandemic shut everything down.

Like her grandfather, Ratzlaff fell in love with the unique nature of the sport.

“A lot of people describe fencing as physical chess, because it’s as much mental as it is physical,” Ratzlaff said. “It’s physically exhausting, especially at these big tournaments where you’re going high-intensity for long periods of time. A lot of it is mentally exhausting, because you’re trying to figure out your opponent. Everything is very technical, every little hand placement or blade adjustment or anything like that makes such a big difference, so your distance between you and your opponent is very important.”

Ratzlaff fences epee with a French grip, as opposed to the more common Russian style, and focuses on controlling the distance between her and her opponent, rather than using her blade to control her opponent’s blade.

“(From the start), she understood the idea of distance, of how important distance was, and she also was willing to just do what I asked her to do,” Leavitt said. “Having someone as good as she is makes me work very, very hard to stay ahead of her. I am always working on how I’m seeing the game that she’s playing and how the other people are fencing her. ... So she’s a real challenge in that way, makes me improve, and it’s very gratifying to work with her.”

Fencing is traditionally a money-heavy sport, and Ratzlaff and Leavitt make an unorthodox pair at high-level tournaments, where the community can be dominated by kids from big-city private schools.

Often, they’re the only representatives from the Pocatello club as Ratzlaff goes up against clubs that can have dozens of kids competing at the same tournament.

“You know there’s a lot of money in it. Obviously there’s arrogance in some people, but the majority is so humble and cool and supportive,” Ratzlaff said. “For me, I’ve paid for pretty much all of my fencing, which has been very difficult, but my parents strive for that. You work for what you get. So, where I’m paying for these tournaments, it’s almost pushed me harder to be successful, because (if) I’m spending $1,000 on a tournament, I really want to make it far, I really want to do the best that I can with this opportunity. I feel like it kind of gave me that special motivation.”

For those fencers from big-money prep schools, fencing can be a way to get into an Ivy League college.

Ratzlaff knew that it could also help her get into college, but instead of the Ivies or Stanford, she had her heart set on Air Force from the beginning.

“I want to be an astronaut, and the majority of astronauts come from the Air Force Academy,” Ratzlaff said. “I’m not dead-set on NASA or SpaceX, all I know is that I really want to go into space. My friend told me the Air Force Academy has fencing, and I was like, this will help me get there. I’m sticking to it, I’m successful at it. ... Honestly, through fencing was kind of what sparked my desire to go to the Air Force Academy. I’ve talked to the coaches since I was a sophomore, and just kind of tried to get in with them, talk to them.”

“I think that fencing has been a real gift for her, because I think it focused her and gave her the mental and physical discipline that it demanded of her,” Leavitt said. “And it let her see just how good she was, and how good she could be at something that was difficult. I think that really built her confidence, and I think it taught her a lot about herself and how to do things.”

At the Academy, Ratzlaff will be coached by former Egyptian fencer and pentathlete Omar Elgeziry, who has placed in several international pentathlon events and won multiple Egyptian national championships in epee.

The Air Force will support her travel to national and international tournaments, which will give her a chance to rack up the all-important points she needs to climb the rankings. She’ll need to be in the top four to qualify for the Olympics, with the next four also having a chance as alternates.

That’s a long way off, but Ratzlaff has already beaten the odds once by getting into the Air Force Academy.

And if she does happen to beat them again, her scheduled graduation date in 2024 happens to line up perfectly with the summer Olympics that year.

“The way the Academy works is, once you graduate, you get 60-day paid leave,” Ratzlaff said. “So within that 60 days, I believe, would be the Olympics, and so if I were to qualify, then I’d fence in the Olympics during that time. It will be very difficult, but it’s totally within reach.”