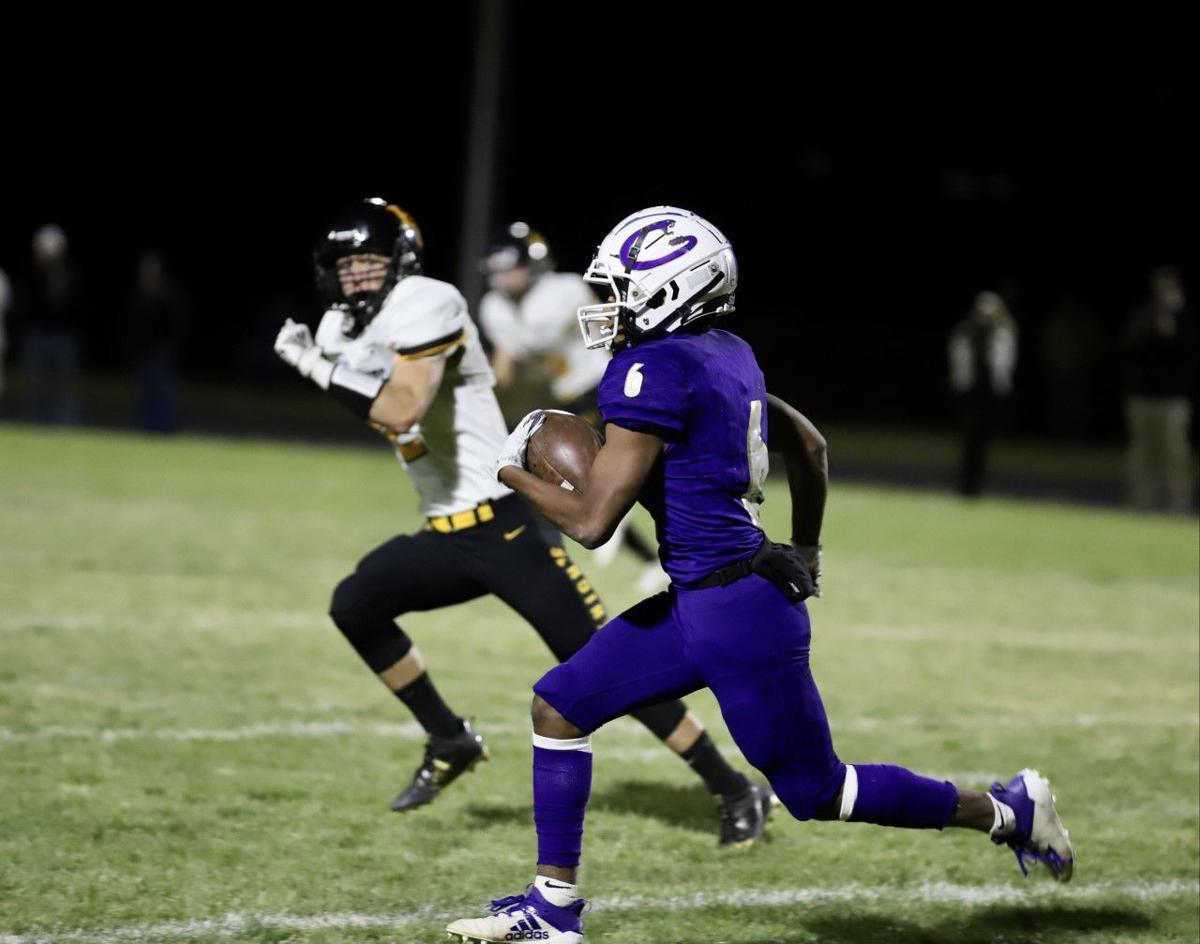 Century’s Jovan Sowell (in purple) runs the ball during last week’s 4A state playoff game against Bishop Kelly at Century. 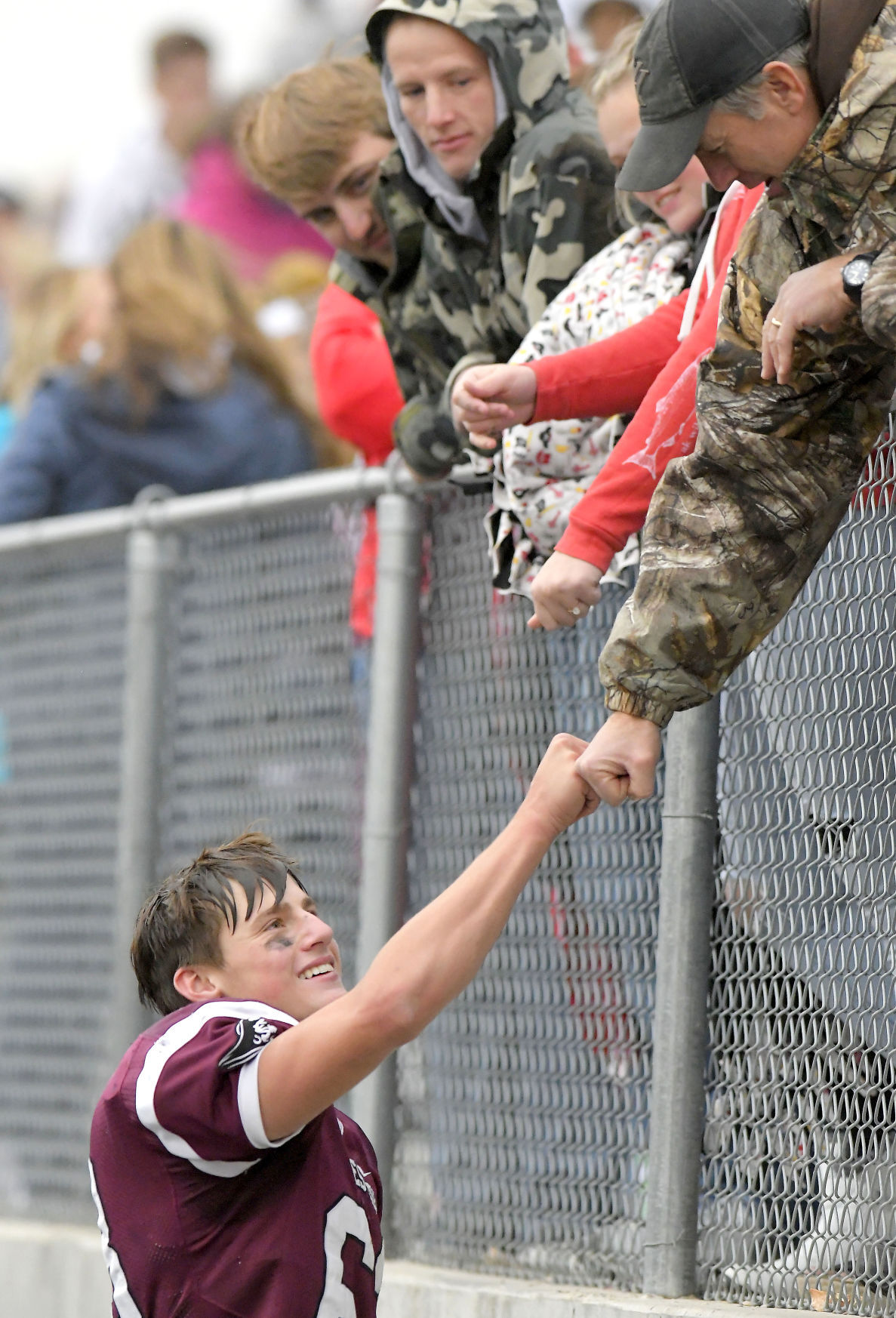 West Side’s Easton Henderson celebrates with fans after the Pirates defeated Grangeville on Saturday in Dayton.

Century’s Jovan Sowell (in purple) runs the ball during last week’s 4A state playoff game against Bishop Kelly at Century.

West Side’s Easton Henderson celebrates with fans after the Pirates defeated Grangeville on Saturday in Dayton.

For the first time in his career, Travis Hobson thanked a coach for beating him.

On the first day of October, Thunder Ridge made Hobson’s Century team look like a pee-wee squad. The 48-28 bludgeoning was embarrassing. It was also enlightening.

“We told them we had a lot of football to play. I made the analogy of a racehorse with blinders — to chase what’s in front of them and ignore everything around them.” Hobson said. “The coaches, we got to work and had to be really honest with each other, to talk about some hard truths.”

Seven Thursdays later, Hobson’s tone was lighter. His boys are running down the homestretch, their blinders fastened and eyes pointed straightforwardly at the two markers in front of them.

The first comes on Friday, when the Diamondbacks will travel west and face Emmett (9-2) in the 4A state semifinals.

The Huskies are on a nine-game winning streak, with their two losses coming by a combined eight points. Many expected them to be in the final four.

Century, on the other hand, had its doubters — most of whom gave up on the Diamondbacks after their ugly loss to Thunder Ridge. Since then, though, they’ve rattled off four-straight victories, reached the state semifinal for the first time in a half-decade and transformed into a new team.

Its offense has proved to be two-dimensional, with two great wide receivers, Jovan Sowell and Bruin Fleishmann, but also able to attack teams on the ground — like last week, when the Diamondbacks hung 243 rushing yards on B.K.

Bishop Kelly coach Tim Brennan couldn’t help but admit that the Diamondbacks’ offensive and defensive lines outplayed his groups, which were much bigger. And, now, all that has put Century a win away from its first state championship game since 2003.

“The underdog card is not a hard one to play because I really think we are the underdog. Tough conditions. On the road,” Hobson said. “It’s really not hard. We watched film as a team and Emmett is good.”

The Huskies shut out Minico and squeaked out a tight game against Blackfoot to advance into the semis. Led by 6-foot-3 junior quarterback Caden Young, senior running back Westyn Smith and a stable of phenomenal pass catchers, Emmett boasts an offense that can trick teams with shifts and motions then dominate them at the skill positions behind a senior-laden offensive line.

“Their quarterback doesn’t throw a lot of balls, but when he does, he picks you apart,” Hobson said. “He’ll throw one and his receivers, if it’s within arm’s length, their receivers are going to catch it.”

On defense, the Huskies are led by 6-foot-5, 240-pound linebacker Axel Sanchez, who seems to take up half the field. Beyond him, Emmett plays very tight and doesn’t allow many big plays.

“I think they’re one of the most physical defenses we’ve seen,” Hobson said. “Their secondary plays kind of soft — they don’t want to give up the deep ball. Their front and their linebackers, they’re about as good as you get. We’re in for a dog fight — and we know it.”

Multiple times in the last decade, West Side’s path has intersected with Declo’s in the state playoffs.

The Eastern Idaho rivals will tangle again on Friday for their third state semifinal meeting in the last four years.

In the two previous matchups, in 2017 and 2018, the Hornets got the win behind star running back Keegan Duncan and went on to win the state title.

“Declo’s been a thorn in my side for sure. They’ve beaten me the last several times,” West Side coach Tyson Moser said. “I’d love to get over Declo. They’ve been a tough opponent and I’d love to get that behind me.”

The history goes back even further. In 2013, Declo beat the Pirates 21-15 in the state title game. In the 2010 semifinals, West Side rolled over the Hornets with a 33-0 win and went on to beat Malad in the championship.

So, if you’re keeping track, the last four times these two teams have met in the playoffs, the winner has gone on to win the state title.

This year will likely be no different. West Side has been the 2A favorite all year, and the Pirates have backed up that recognition, going 9-0 to push their winning streak to 19 games.

Declo dropped games to Aberdeen and 3A semifinalist Kimberly early in the year to fall to 1-2 but has since won six in a row, including a 50-14 blowout of Melba to start the state playoffs.

“They still have great athletes like they seem to always do,” Moser said. “They’re probably the first team we’ve played this year that will match our team speed.”

The Hornets have the best offense in 2A at 40.1 points per game, which sets up a great matchup against West Side’s No. 1 defense (6.1 points allowed per game), but the Hornets will look a little different than in the previous games.

West Side hasn’t played Declo since new head coach Josh Stewart took over the program from Kelly Kidd before the 2019 season. While the defense remains similar with a four-man front, the Hornets have moved on from their traditional wing-T offense, although they’re still run-heavy.

“It’s a shotgun, more of a spread look, but they’re spreading you out to create space for their athletes to run,” Moser said. “We’re going to have to tackle in space, keep people inside, not let them get outside.”

Declo quarterback Gabe Matthews has run for 1,778 yards and 25 touchdowns in nine games. Derek and Brogan Matthews are the other top ballcarriers for the Hornets.

“I don’t know whether they’re brothers or cousins or what, but three Matthews kids and they’re great athletes,” Moser said. “They’re fast, and I’m almost positive that they’re wrestlers, so they’re tough to tackle, good balance. It’s a direct snap to (Gabe Matthews), so you’re putting the ball directly in the best player’s hands, and then he’s faking the handoff to their next-best kid.”

It’s familiar territory for the programs, but most of the players on West Side’s roster don’t have any history with Declo.

“Those were pretty senior-heavy teams,” Moser said. “I don’t think any of these players got any playing experience in that (2018) game. It’s pretty far removed from this group. To them right now, it’s just another game. It’s the game they need to win to get to the championship.”