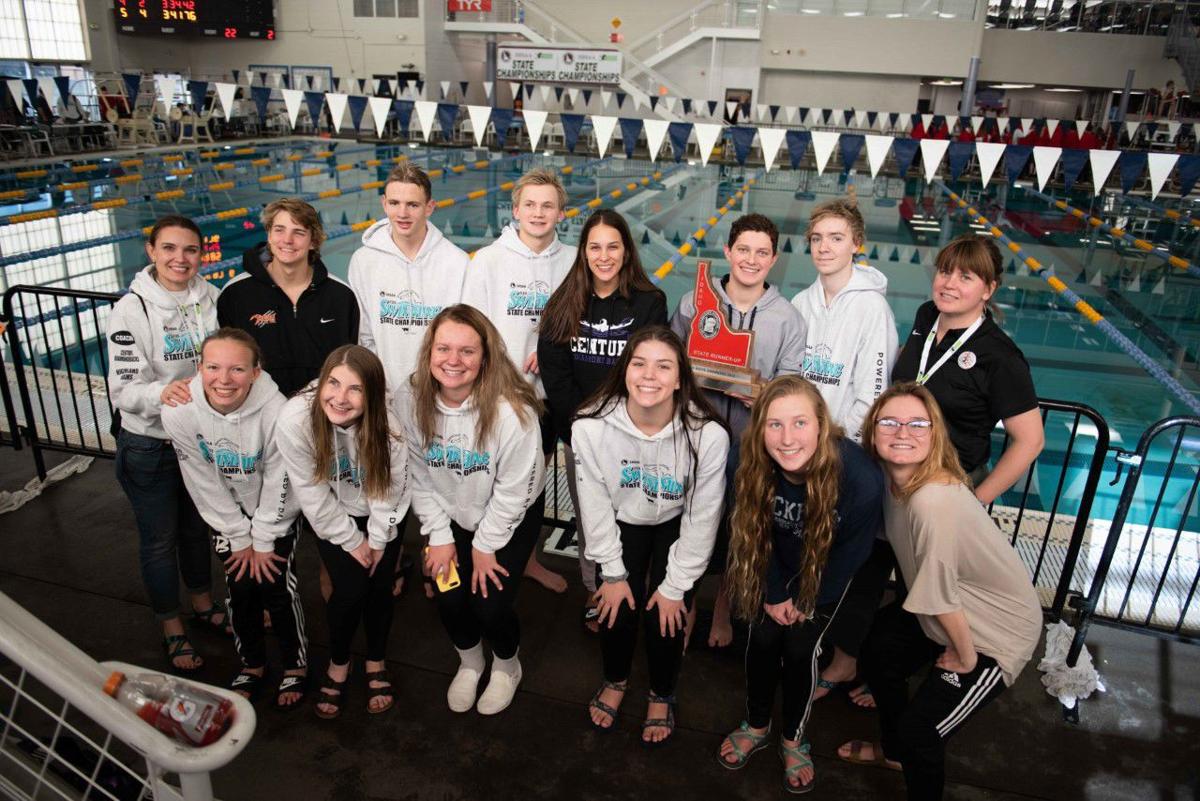 The Century swim team poses with the red second-place boys team trophy Saturday at the 4A swimming state meet in Boise. 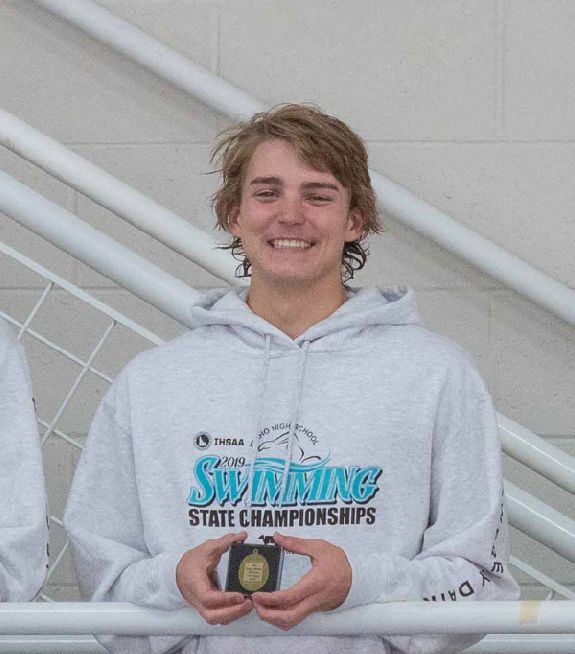 Century swimmer Coleman Sandy poses with his state championship medal Saturday at the 4A swimming state meet in Boise. 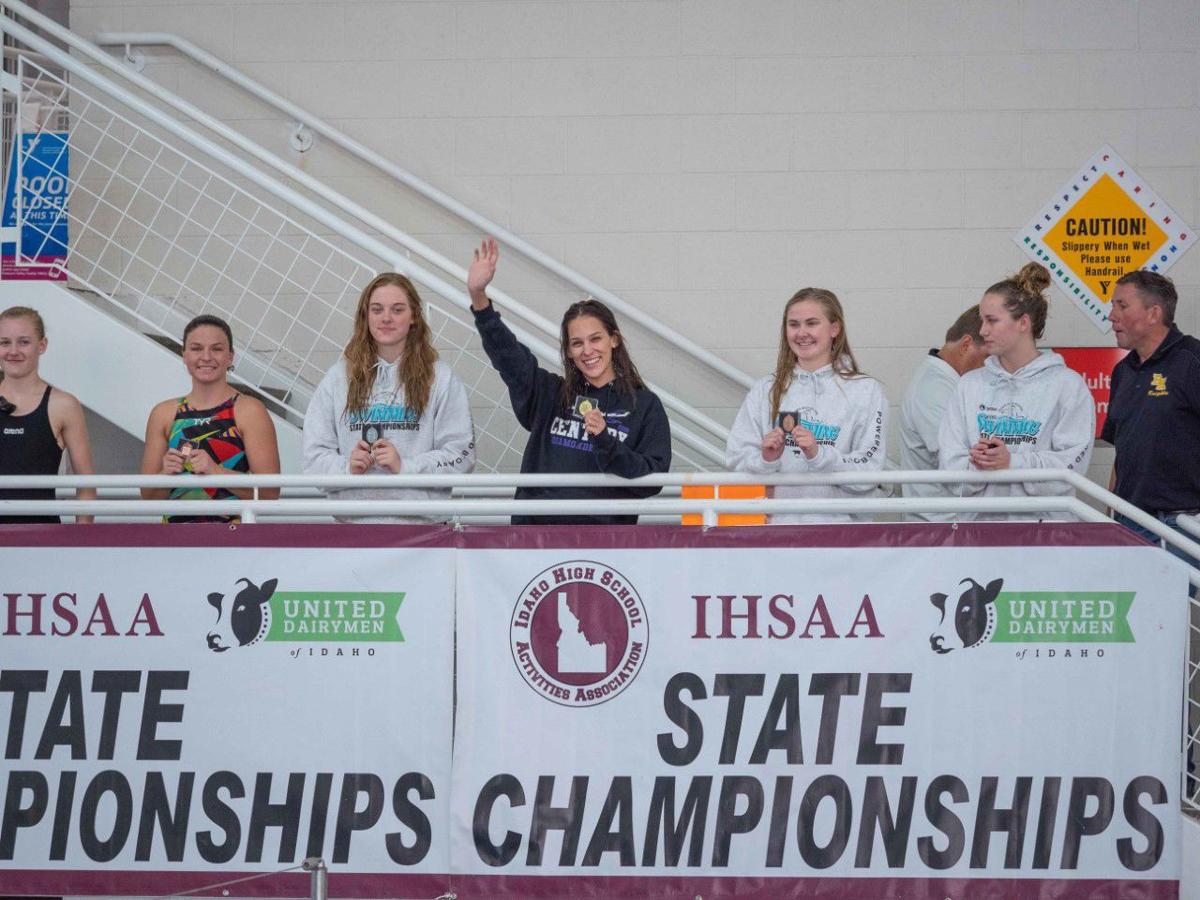 Century swimmer Kaitlyn Shelley, center in black, waves and holds her state championship medal Saturday at the 4A swimming state meet in Boise.

If that’s true, their final two races were good ones to go out on.

The swimmers set new 4A state meet records, too, adding accolades and emotion to a day already filled with both.

“That’s my last meet ever,” Shelley said. “I’m completely done swimming now. I went out with a bang.”

Shelley broke her own 4A state meet record in the 50-yard free, completing the swim in 24.36 seconds — 0.69 ticks faster than last year’s state-winning time, and 0.66 seconds faster than Saturday’s second-place finisher. She was the top-seeded swimmer in the event and expected to finish as such.

But her emotions really kicked in after winning the 100-yard fly.

Shelley was seeded second in the event, behind Canyon Ridge’s Olivia Hall, and had been trying to break the 1-minute mark for years.

Shelley touched the pad at 58.23 seconds, achieving a new personal best, winning state gold and setting a new 4A state meet record, all in one.

“My dad ran up to me after the race and we were both just bawling,” Shelley said. “My mom was bawling with us. It was just a really cute moment.”

Sandy also broke his own 4A state meet record, winning the 100 free in 49.56 seconds — 0.53 seconds faster than his previous record.

“After my 100, I went and saw my mom and she started tearing up, and I was tearing up,” Sandy said. “It’s just a long time coming.”

Sandy added a championship in the 50-yard free, clocking a 22.41 to outpace Burley’s Jackson Rasmussen by over a second.

“I wish things overall happened a little different, but we’ve still got a good group of boys for next year and for years to come,” Sandy said. “You’ve definitely got to keep your eyes out for those boys.”

The Century girls finished third in the 200-yard freestyle relay and finished seventh in the team standings with 81 points. Sandpoint won the team title with 217 points.

Shelley doesn’t know exactly what life after swimming will bring. She hasn’t been able to celebrate her recent victories long enough to think that far ahead.

And for Sandy, who helped Century win Idaho’s first-ever sanctioned 4A boys swimming state title? That legacy is one he’ll carry with him long after his days in the pool.

“The legacy is everything for me,” he said. “Every school assembly, that’s the first thing I look at going into my gym is that (championship) banner. ... I just go in there and I’m like, it happened, we did that. I’m going to be coming back in like 20 years, and the same names are going to be right there.”

Highland’s girls finished 13th and were led by their 200-yard medley relay team, which finished ninth in 2:08.28.