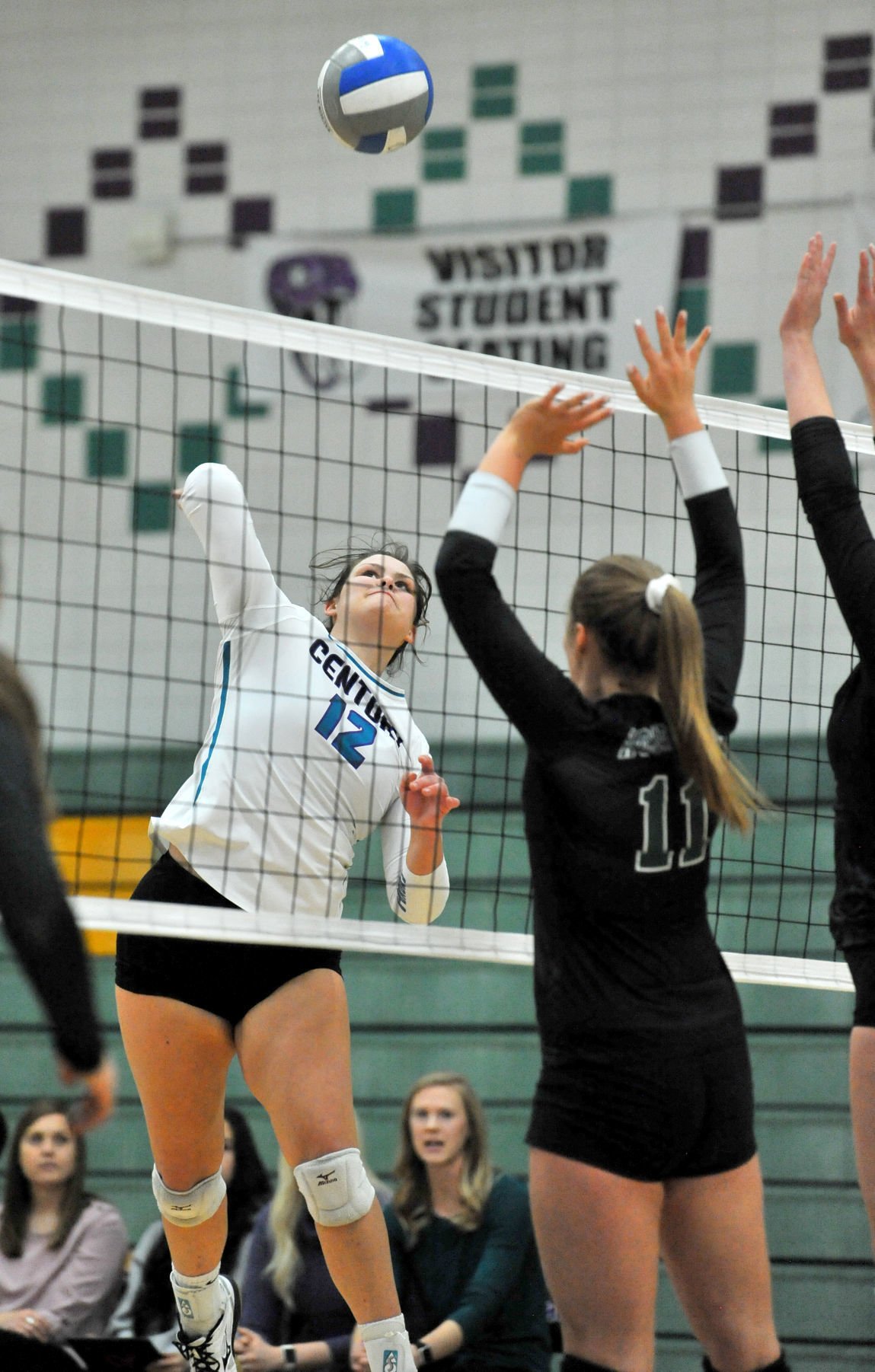 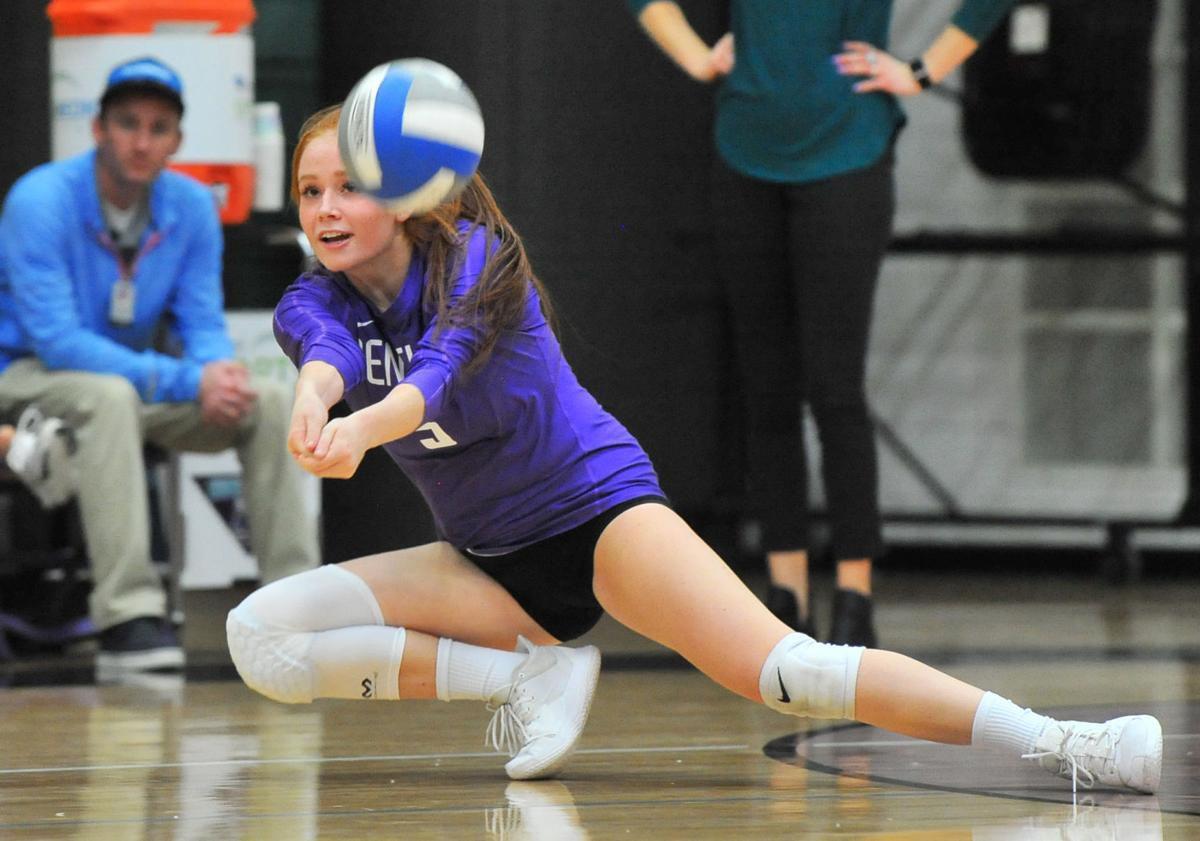 Century’s Julia McNulty crouches for a hit during a match Oct. 24, 2019 at Century High School. 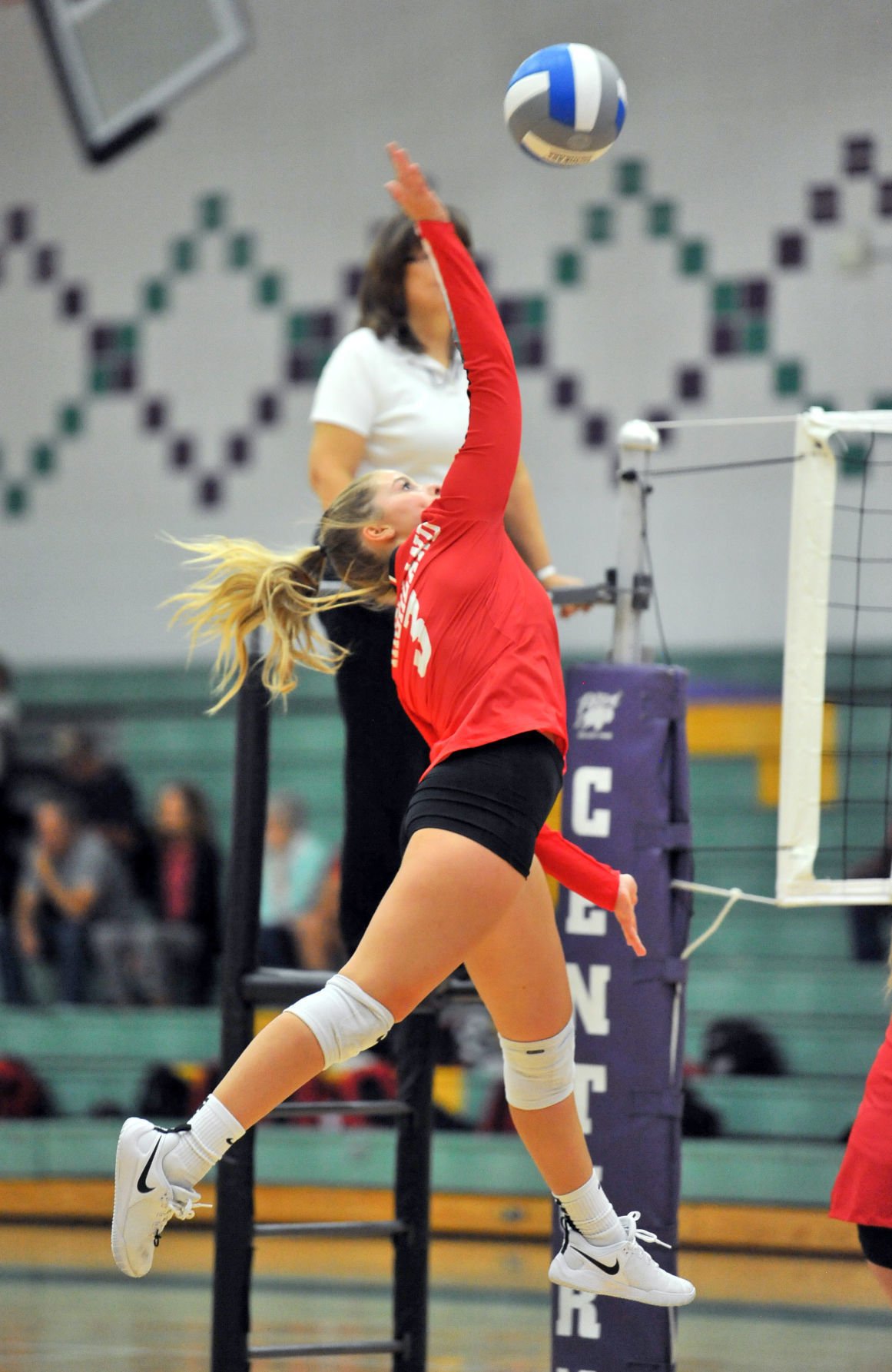 Highland’s McKenna Armstrong eyes the ball for a spike during a match Sept. 12, 2019 at Century High School. 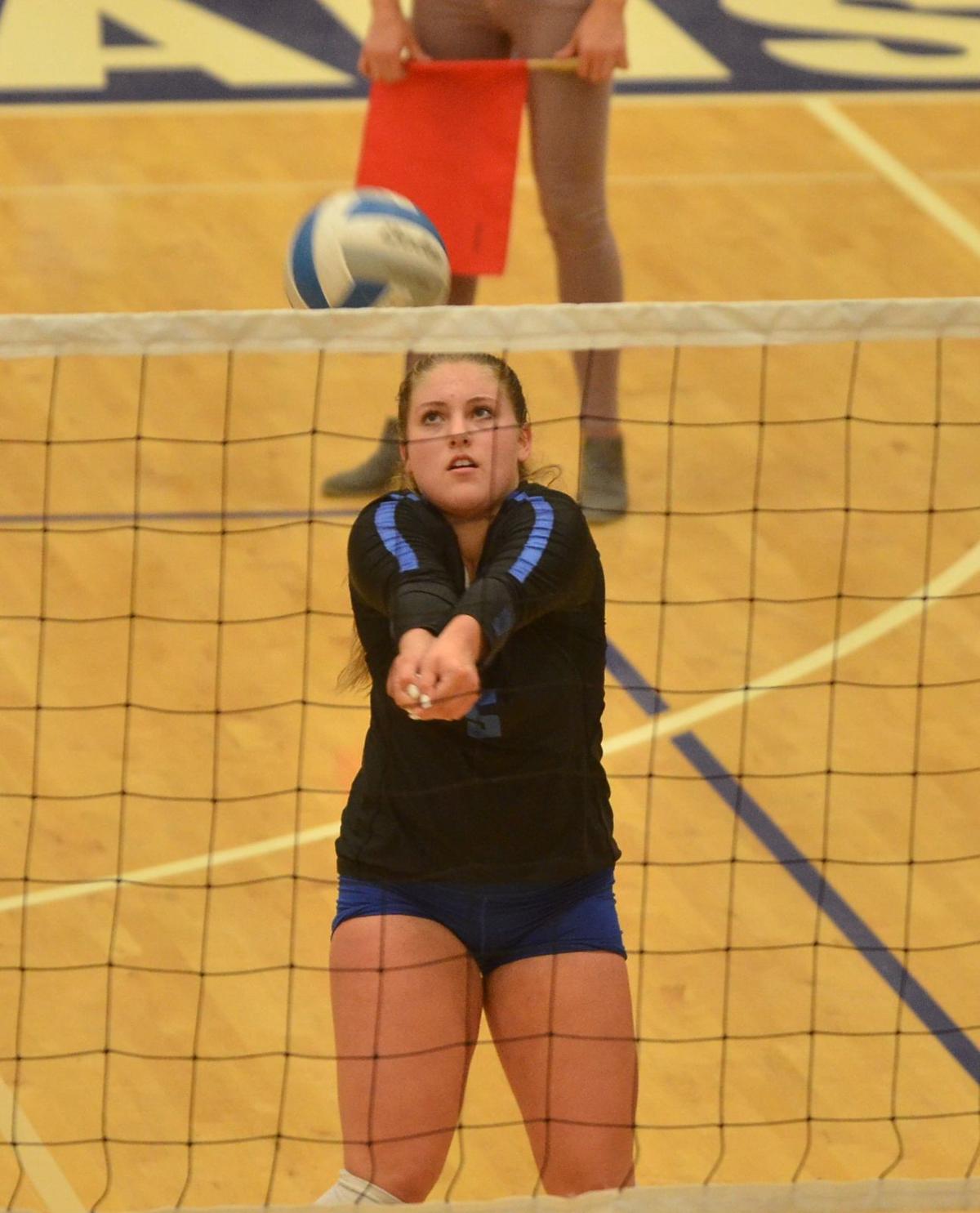 Preston’s Matti Whitehead sends the ball over the net during a 2019 match against Minico. 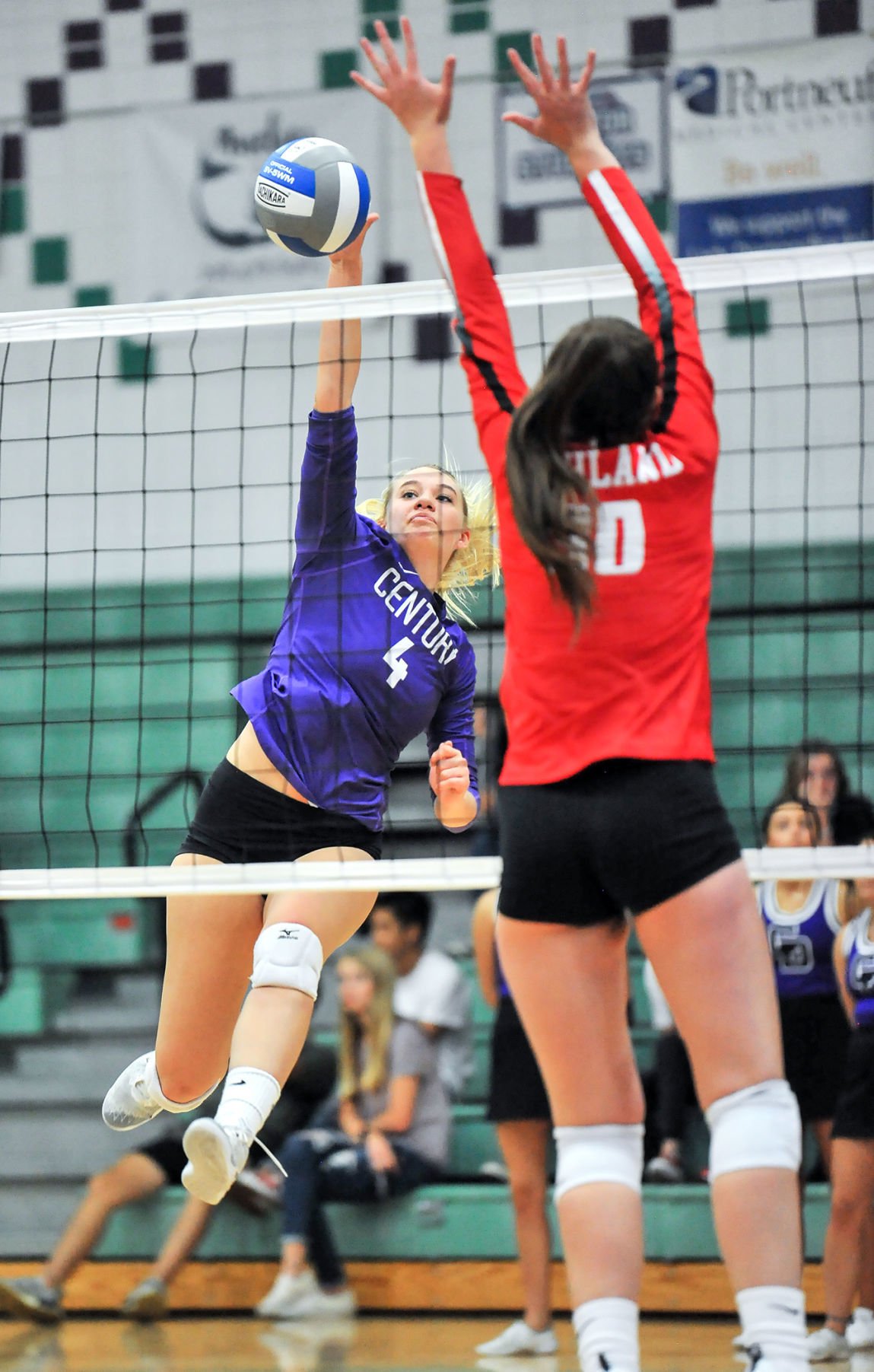 Century’s Ashley Harris (4) hits against Highland’s Sydney Bang (30) during the third set of their match Sept. 12, 2019 at Century High School.

The lowdown: Christensen was the biggest source of offense for the 4A state runner-up Diamondbacks, leading Century with 376 kills on a .216 hitting percentage. When the senior got going, teams had to adjust their strategies to stay away from her at all costs — which only unlocked things for Century’s other players. Christensen was named to the 4A District 4-5 first team.

Quotable: “She was our most reliable hitter, very consistent, and she’s improved so much over her three years. She’s a pretty intuitive outside hitter. She wasn’t quite as vocal (as some others), but she brought a ton of competitiveness. She was the one who was locked in on game day, always showing up to play.” — Century coach Breanne Robinson

The lowdown: It was one of the most successful seasons in years for Bear Lake, which won two loser-out games to make it to the state tournament for the first time since 2011 and then beat state powerhouse and eventual 2A runner-up Nampa Christian in the first round. Gundersen was a huge part of that in the middle, leading the Bears with 432 kills and 118 blocks, two of the top totals in the area.

Quotable: “She really was a force. A great blocker, a great swinger.” — Malad coach Camie Tripp

The lowdown: A three-year starter at libero for Century, McNulty continued her typically-excellent level of play in 2019 as the Diamondbacks finished runner-up at the 4A state tournament. The senior recorded 467 digs and also played a big part in Century’s offense, finishing second on the team in assists (102) and third in aces (54). McNulty made the 4A District 4-5 second team.

Quotable: “She was pretty key for our offense this season, just being able to rely on a good pass. She was a good defensive player and server, she had a great serve. All-around, in her role, she did a great job.” — Century coach Breanne Robinson

The lowdown: Tripp racked up the stats as Malad rampaged through its regular-season schedule en route to a third-place finish at the state tournament, finishing with 1,094 assists to drive the Dragons’ offense. She contributed in other ways as well, recording 82 blocks (third on the team) and pitching in 167 kills (fourth).

Quotable: “She has great court awareness, which plays into her ability to know who has the hot hand. She made sure she got the ball to the player who was putting the ball away the best, and she did a good job knowing the weaknesses of our opponents and keying on them.” — Malad coach Camie Tripp

The lowdown: Wilkes set the tempo as Pocatello, which went into the district tournament seeded No. 5, beat Preston and Minico to come within a match of making it to a state tournament play-in game. She finished her career with a first-team all-conference nod from the District 4-5 coaches.

Quotable: “She’s pretty scrappy and tough and competitive, and she was their leader. She worked hard, she played hard. She was fun to play against.” — Century coach Breanne Robinson

The lowdown: Whitehead was the picture of a classic libero for Preston, leading the Indians in digs (330), aces (34) and serve receptions (382). Coaches in 4A District 4-5 thought highly enough of Whitehead to give her a spot on the all-district first team after she led Preston to the No. 4 seed in the district tournament.

Quotable: “She was just one of those liberos that you would always avoid serving to. She was pretty solid as far as serve-receive went, and defensively, she was pretty darn good too. We tried to keep the ball away from her.” — Century coach Breanne Robinson

The lowdown: Armstrong was all over the court for Highland in 2019, finishing with 264 kills and 247 digs as an all-purpose outside hitter. She could score points on dead balls, too, recording 35 aces, and was named honorable mention on the 5A District 5-6 all-conference team.

Quotable: “McKenna was hands-down our best all-around player. She’s extremely reliable, a great leader on and off the court, and is constantly pushing herself to be better for the team. She improved a lot this season.” — Highland coach Kelsey Bystrom

The lowdown: Harris, along with Lexi Bull and Hannah Hearn, made up a fierce block for Century that other teams struggled to hit the ball through. Harris led the Diamondbacks with 67 blocks (41 solo). She also put down 184 kills, fourth on the team, with a hitting percentage of .194.

The lowdown: Snake River made it to the state tournament for the 11th year in a row in 2019, and Kracl was a big part of that. The senior was a feared hitter on the outside for the Panthers.

Quotable: “She really gave us some problems. She was the one player we had to keep the ball away from.” — American Falls coach Jami Adair

The lowdown: Painter wrapped up her decorated career with a second-straight 1A DI District 5-6 Player of the Year Award after leading Grace in kills (323) and hitting percentage (.196). With her leading the way, the Grizzlies made it back to the state tournament for the second year in a row.

Quotable: “She was my team leader. When we needed a kill, we went to her. She’s going to be a hard one to replace with the leadership and the talent she had.” — Grace coach Heidi Stoddard

The lowdown: Ward dominated the middle for Malad’s state third-place team, using her athleticism to lead the Dragons in kills (435) and hitting percentage (.300). She was a force on defense as well, putting up 113 blocks as Malad dominated 2A District 5.

Quotable: “Just a dynamic and explosive player. She had great ability to get up, see the court and put the ball away. She’s purposeful with her swing. She was a smart hitter, so she took advantage of the opportunities to hit around the block. I think that’s evidence of her ability to swing smart as well as hard.” — Malad coach Camie Tripp

The lowdown: Before helping Rockland’s girl’s basketball team win a state championship in the winter, Wilson was a dynamo on the volleyball court in the fall. As she was on the basketball court, Wilson was a defensive specialist for Rockland volleyball, covering ground and helping the Bulldogs to a state tournament appearance.

Quotable: “She got to everything, never let anything drop. She’s just a die-hard, gives it her everything, and she’s athletic on top of it. The drive that she has on top of the ability that she has puts her on top.” — Rockland coach Shalissa Tomkinson