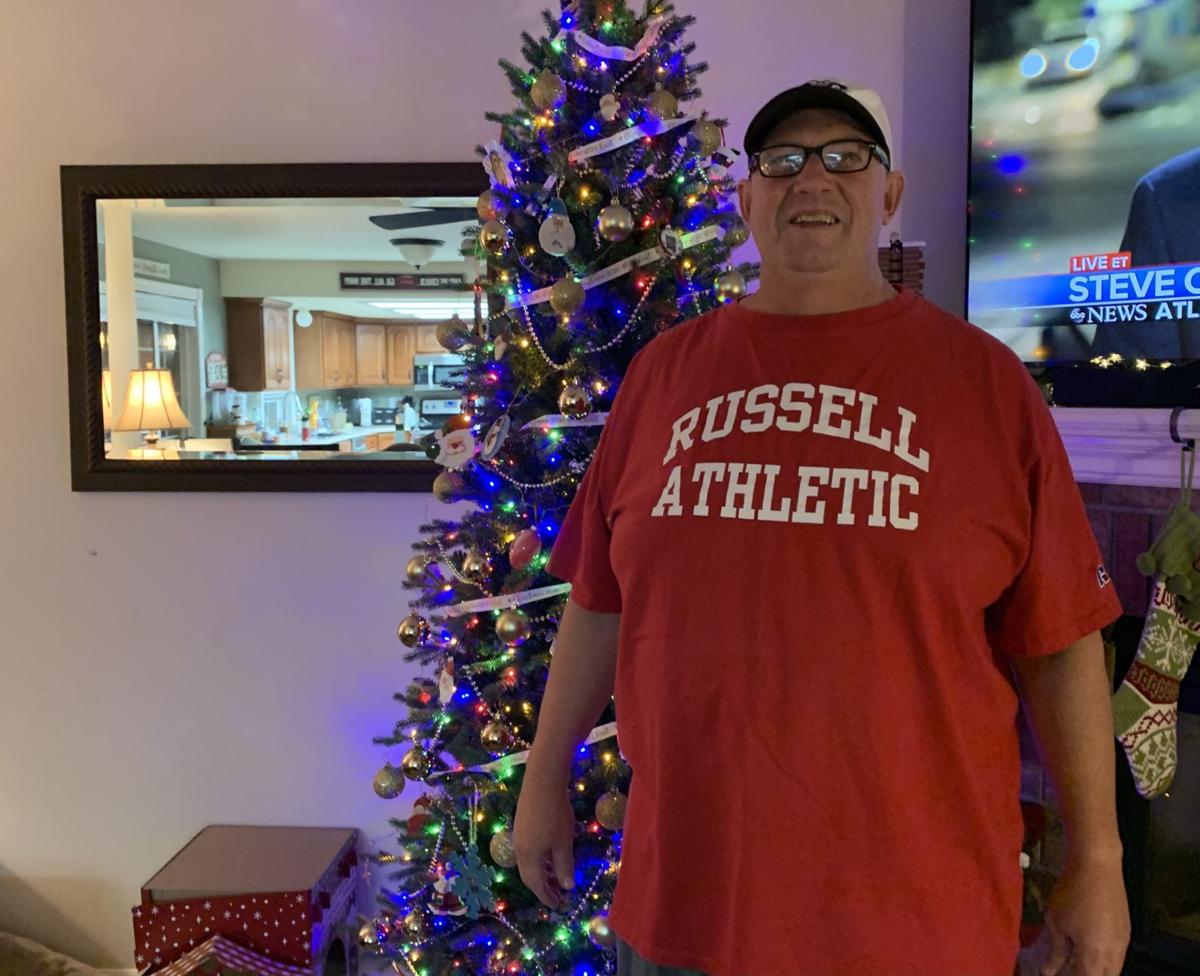 Highland coach Gino Mariani stands in front of the Christmas tree in his living room the day after watching his former star quarterback, Taysom Hill, start under center in the New Orleans Saints’ 31-3 win over the Denver Broncos. 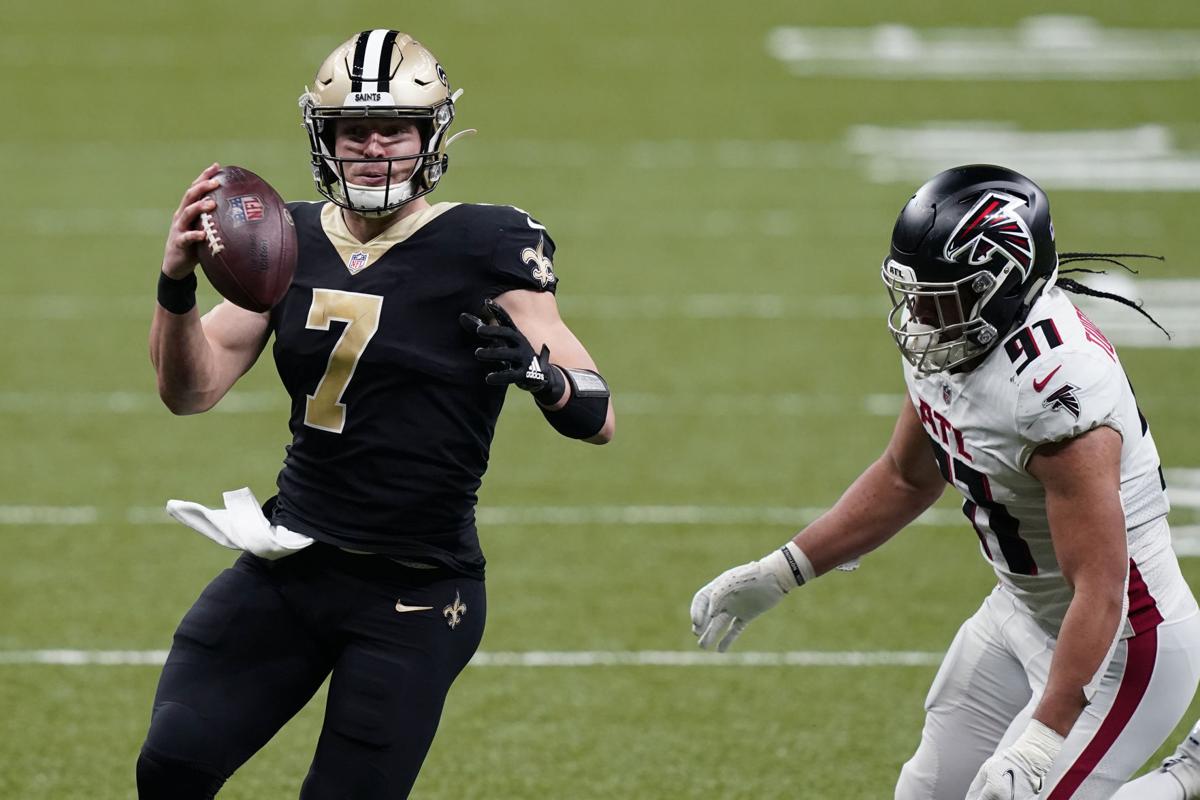 Highland coach Gino Mariani stands in front of the Christmas tree in his living room the day after watching his former star quarterback, Taysom Hill, start under center in the New Orleans Saints’ 31-3 win over the Denver Broncos.

POCATELLO — Years and years ago, Gino Mariani’s relatives relocated from Italy to Ely, Nevada, and worked on the railroads of the small copper mining town. And if you want to know what those houses smelled like throughout the 1900s, Mariani does his best to recreate the aroma in his own home.

It hits you as he swings open his screen door, walking toward the kitchen in his white hat and black shirt. The hallways smell like tomatoes and tradition. A sniff of the pot sitting on his stove sends your brain into a tizzy trying to guess ingredients. It’s pastina soup his grandmother used to make — slightly-altered, of course, to include peppers, onions and some “secret ingredients.”

It sits on the stove for hours, simmering until it reaches the consistency Mariani is after.

And the Highland head coach had all of about 10 minutes to savor it before the phone rang and his opinion about the prodigal son of Pocatello was demanded once again.

“Gino, what did you think?” said Warren Whitaker, an old friend of Mariani’s who used to be Highland‘s offensive line coach.

“He’s doing what he’s being asked to do,” Mariani said. “He doesn’t have to go above and beyond that right now and that’s fine. And, you know what? He’s pleasing his coach and they’re winning games and they’re still No. 1 in the NFC and that’s good.”

“That is very good. I guess I’m still frustrated with the play-calling in the sense that it didn’t help Taysom out a lot when he tried to throw.”

“No, you’re not going to see his full repertoire, that’s for sure.”

“You and I, we’ve never called a pro game so I’m not going to fault him for what he’s doing.”

“Yeah I hear you. I just wanted to see Taysom do his thing.”

Some would say he did because, for the second time in as many weeks, Taysom Hill won a game as the New Orleans Saints’ starting quarterback. But Whitaker’s frustration comes because of what transpired a week ago, when the Highland alum, in his first NFL start under center, wasn’t on the training wheels most first-time starters are bound to. He completed almost 80% of his 23 passes for 233 yards and scored a pair of rushing touchdowns.

Sunday’s performance was more subdued. Hill wasn’t asked to be Superman in a 31-3 victory over the Denver Broncos. His downfield shots were limited. The offense he operated was vanilla. Handoffs were the favorite play of the day. And, from the get-go, eating clock and sustaining drives was priority No. 1.

To those in Gate City — who root for the individual success of Hill more than the Saints themselves — New Orleans coach Sean Payton may as well have put Hill in concrete cleats.

When Hill’s 6-foot-2, 220-pound frame gets churning, they think, defenders better bring backup to tackle him. And his arm has enough zip to huck the ball over the Tetons if he wanted, they figure, because they’re still mesmerized by the bombs he completed in Holt Arena all those years ago.

Mariani is a wizard with the remote. His memorization of every NFL Sunday Ticket channel is about as impressive as his mastery of old family recipes. Commercials on Sundays don’t hold for more than a second before he flips the channel to some actual action.

And turning on the volume is pointless — Mariani’s commentary often precedes anything on the TV.

Just after Hill’s second rushing touchdown Sunday — a two-yard scramble on a quarterback power play, which allowed Hill to run up the middle for the score — Mariani pointed at the TV and described why it worked.

“That was (quarterback) power,” he said. “See, they’re going to kick out and pull the guard —”

A half-second later, Fox NFL analyst Mark Schlereth weighed in for viewers. “Now, we’re going to pull the guard around,” he said.

The best part of Mariani’s insights is they always come back to Highland, to something he’s seen before. To something he tried or can’t wait to implement next season. To something he could only do when Taysom Hill wore the black and white.

“See that fake in and pitch out, we put that in, in the state championship game (in 2008) based on (Tim) Tebow,” Mariani said on the play just before the touchdown, after Hill’s toss right was broken up by the Broncos. “It worked and he threw a touchdown. What was cool about it is they put it on ESPN because (Highland alum) Merril Hoge worked at ESPN.”

Mariani told another story about Hill’s football IQ. He said he used to have all his quarterbacks wear armbands with numbers that corresponded to each play. From the sideline, Mariani would flash the number with his hands and his quarterback knew exactly what to run. With Hill, that was too rudimentary.

Instead of one number corresponding with one play, the number Mariani held up led to a grid on Hill’s wristband that had three options he could call.

Just after halftime, Hill unleashed a dart that was tipped by Broncos’ cornerback A.J. Bouye and picked off. The Fox cameras kept peeking in on Hill on the sidelines, with his even-keel stare glaring at a tablet. His face still looks the same as it did a dozen years ago — well, to Mariani, at least.

A little before the interception, Mariani’s son, Joe, walked into the house with a bag of Wendy’s after deciding to spend his lunch break at home.

“Is he starting again this week?” Joe asked, obviously not too caught up on the success of his father’s former players.

But, perhaps, that’s natural for someone the family doesn’t look at as an athlete. He’s just Taysom, the kid who lived four doors down. The one who used to be so kind to their sons when they’d see him shooting hoops in his driveway and want to join. The one who has been in their lives for years.

Heck, when the Marianis moved into their house, Hill was there helping out.

“We got like two or three other dudes, too, because they were big and strong,” Mariani said. “So when I bought this house, he lived right down the street. So they grabbed their trucks and they’d bring loads and they helped us move in here.”

Mariani’s wife, Jennifer, is still amazed how those boys managed to lug some of their furniture down to the basement, joking that if they ever have to sell their house, none of it will be leaving.

Joe currently occupies the basement, which is more of a man-cave with the mob movie posters on the wall and the vintage blackjack table from the old Sahara Casino in Las Vegas and the brand-new PlayStation 5 that Joe camped out to acquire.

Before Joe took up residency there, though, the Mariani basement had a revolving door of occupants that needed help, many of whom were former Highland players who needed a new home as they transitioned out of high school.

One of those was Mark Scott.

Scott’s family life was unstable as he turned 18, and he decided to pack it all up as he followed his girlfriend from Maryland when she enrolled at Idaho State. He enrolled at Highland in 2008 and Mariani convinced him to use his track speed on the football team. His quarterback that year was Hill, the pair helping the Rams’ state title team.

But, as the year wore on, he started arriving late to practice and having troubles that worried Gino and Jennifer. One day, he showed up at their door.

“He said, ‘I have nowhere to go,’ Mariani said.

“And (now), he’s doing fantastic. Lives in Boise. Got married. Had a kid. Works for ICCU. We’re so proud of him.”

Sitting next to each other at the kitchen table, Gino and Jennifer beam.

To them, athletic success is temporary. Watching Hill is pretty awesome. But whether he’s on an NFL field or the grass of Highland’s practice field makes no difference to them. He could win a Super Bowl and do all these unreal things and they, like many in the town, see him as the kid from Pocatello. Even talking about how he — like Scott — is 30 years old and married with a kid startles them.

Gino still remembers all the recruiting calls that came in from big-time colleges to try and lure Hill out of Idaho. About when he signed to Stanford to play under Jim Harbaugh. About how he decided that could all be put on hold to fulfill his mission for the Church of Jesus Christ of the Latter-day Saints. About, how at that moment, Hill didn’t care about athletics.

“I was like, ‘Dude, it’s a two-year mission. They have their guys for two years. It’s going to be four years before you even see the field,’” Mariani said.

But Taysom went. He came back, completed a rocky five-year, injury-riddled career at BYU and then endured the tragedy of his brother, Dexter, dying after an addiction to opioids in 2015.

“He had the same dynamite personality — had the world by the balls,” Mariani said of Dexter. “It was a rough deal.”

Some things have changed since then. Taysom wears a new number (7) to honor his brother. His celebrity has been elevated from regional status to nationwide. Texts from old coaches and friends aren’t returned as quickly.

But Taysom still comes back to Pocatello, just as he did after Dexter’s death when the community rallied around the Hills. Old friends, coaches and teammates joined together during that time to help one of their own in a time of need.

If anyone knows about that, it’s the Marianis, who have used Gino’s 31-year career in District 25 to support as many young people they can.

“I coach. That’s what I do … and I love teaching,” Mariani said. “I go in every week with a great attitude because I enjoy it. I enjoy my job.”

On days like Sunday, it’s easy to see why.

Furnishing your apartment for $900