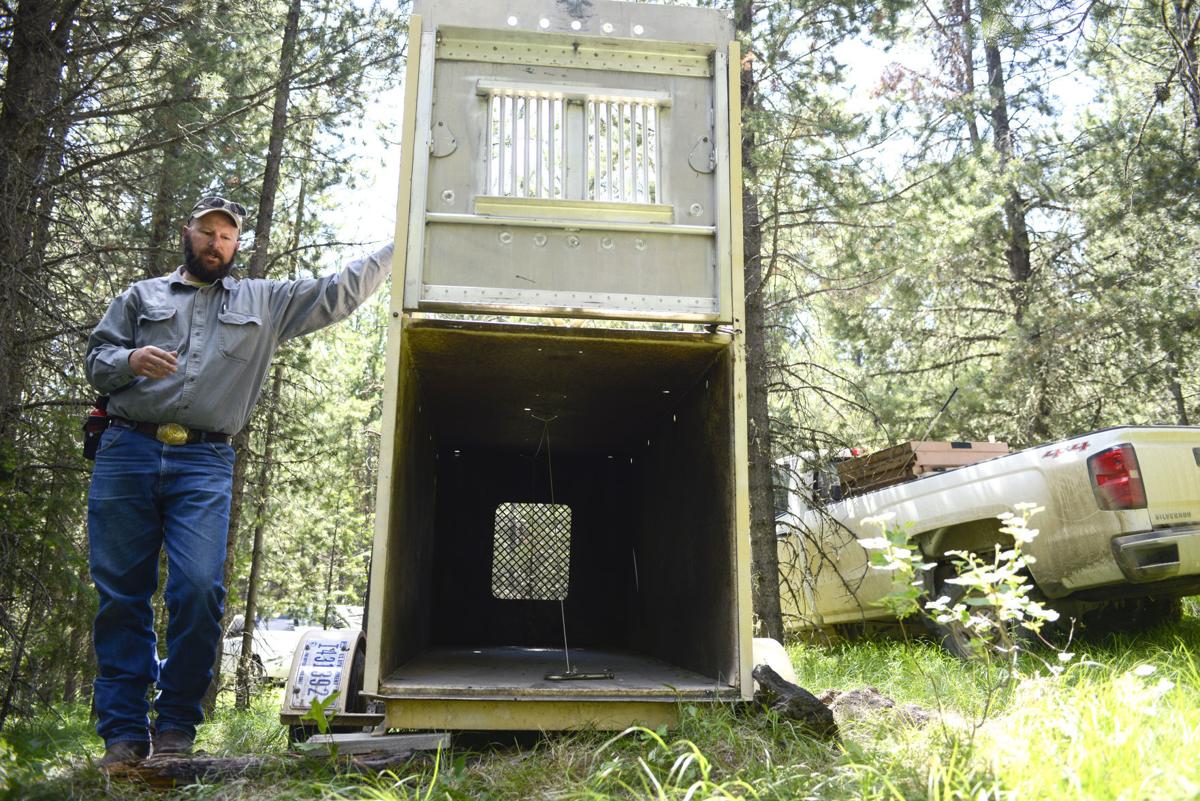 Chad Dickinson, a biological science technician for a grizzly bear study team, explains how a grizzly bear trap works on July 6, 2017, in the Gravelly Mountain Range. 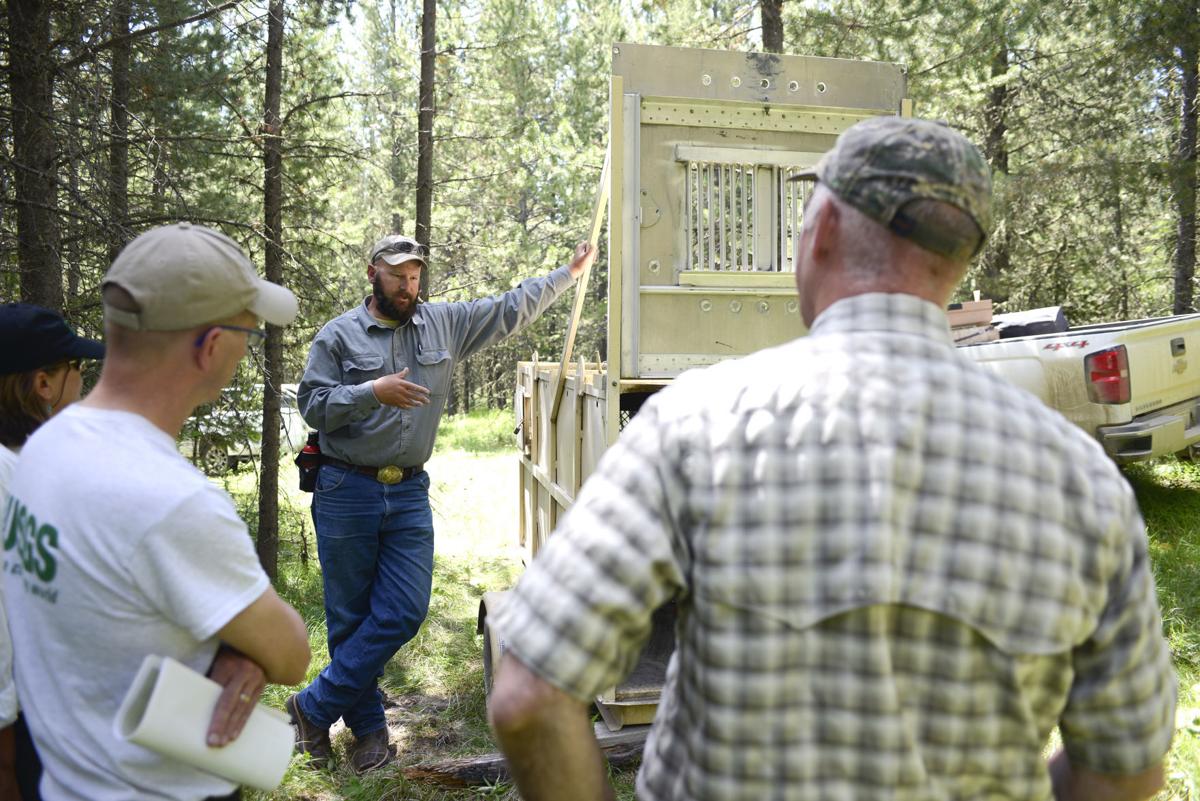 Chad Dickinson, a biological science technician for a grizzly bear study team, explains how the trap works to Greg Gianforte July 6, 2017 in the Gravelly Mountain Range.

Chad Dickinson, a biological science technician for a grizzly bear study team, explains how a grizzly bear trap works on July 6, 2017, in the Gravelly Mountain Range.

Chad Dickinson, a biological science technician for a grizzly bear study team, explains how the trap works to Greg Gianforte July 6, 2017 in the Gravelly Mountain Range.

If you were to imagine someone who traps grizzly bears for a living, you’d imagine someone like Chad Dickinson. Large, bearded, deep-voiced. The kind of guy who would much rather be deep in the woods than in an office talking to a newspaper reporter.

His love of being out there is part of the reason Dickinson is slated for his 24th consecutive summer of trapping grizzlies.

“I still love to catch bears,” Dickinson said earlier this month. “For me personally, it’s just seeing them and being up close and getting your hands on them, and treating them the proper way.”

Dickinson’s official title is biological service technician, but he serves as the leader of the Interagency Grizzly Bear Study Team’s field crew. The crew, an arm of the U.S. Geological Survey, goes out each summer and sets culvert traps for grizzlies around the Greater Yellowstone Ecosystem.

Once a bear is trapped, Dickinson and his team gather data that inform studies and fuel arguments about the management of the animals — like whether they should be protected under the Endangered Species Act or not.

Endangered Species Act protections were removed from the bears in 2017. Multiple lawsuits have challenged the decision, but delisting critics and supporters alike turn to data that begins with biologists setting a bear trap.

“Other scientists have disagreed with some of the findings, but in general we’re very supportive of (IGBST’s) work,” said Zack Strong, of the Natural Resources Defense Council. “Debate is a good thing, and the more information we have to use in our debates the better.”

Delisting has ceded management responsibility to the states, but the IGBST is still largely responsible for monitoring and studying the population, meaning Dickinson still needs to go out and trap bears.

That’s all right with him. He has always liked bears. He grew up on a dairy in Ohio and hunted and trapped as a kid. Moving west was always something he wanted to do, so that’s where he looked when it came time to look for colleges.

“I kind of looked at the areas that had grizzly bears, basically,” he said.

After two years at a community college in Ohio, he landed at Montana State University. Shortly after graduation, he took a seasonal trapping job with the study team, beginning in 1994. He became a permanent employee in the early 2000s, which means his winters consist of data entry and that he oversees two other trappers each summer.

By now, he’s used to the hitch schedule (10 days on, four off), knows all the trap site safety protocols (truck always pointed toward the way out, the doors always wide open in case you need a quick getaway), and can stand the smell of bear bait (mostly roadkill). He’s used to horseback rides into Yellowstone’s backcountry, long drives up rough forest roads and bear encounters don’t scare him as much as the average person — he called it a “controlled fear.”

Usually, they set four or five traps in the same area. Once a telemetry device tells he and the other crew members when one of the trap’s doors has dropped, they head to the site as soon as possible.

If it’s a black bear, they let it go. If it’s a grizzly, the work has only just begun. They tranquilize it and lay it on a tarp. They check the pulse, temperature and respiration. If it’s a new bear, they pull a tooth, tattoo its lip and attach an ear tag.

Ear tags are often how they know they’ve caught a bear for the second time, Dickinson said. It happens once in a while, so there are a few bears he knows well, including one that was euthanized last fall that had been with him from the start.

“He was probably the second or third bear I captured, or helped capture, in 1994,” Dickinson said.

The first capture was in the western part of Yellowstone National Park. About a decade later, the bear turned up in the Gardiner area, on the north side of the park.

Dickinson, now 46, said it was interesting how the bear had reappeared throughout his career.

“We caught him as a sub-adult. He was probably a 2- or 3-year-old. And then to live that long on the landscape, making a living,” he said. “It was interesting to see him kind of move back where he came from.”