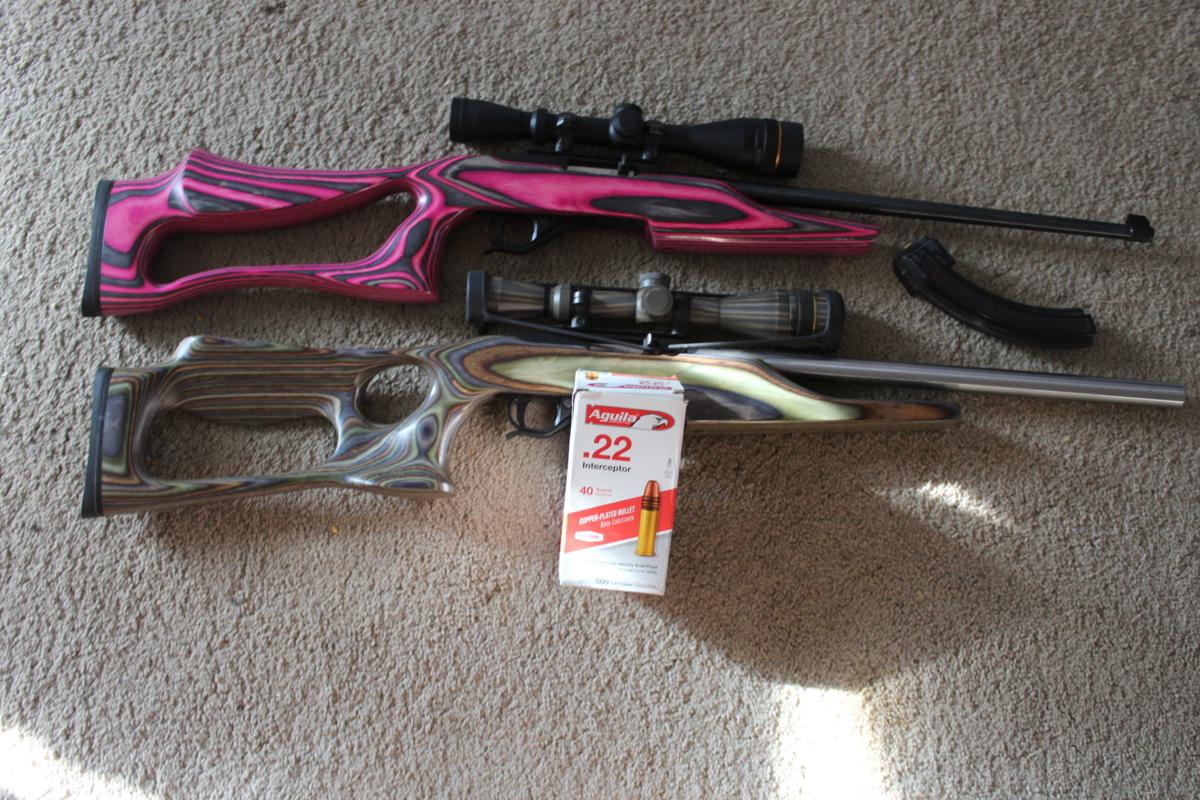 A couple of tricked out Ruger 10/22s. Timney Triggers, Brownell's bull barrel, 25-round clips, Boyd's Stocks, a custom scope out of the Leupold Custom Shop and some high-quality Aquila ammo and you'll be in plinker's heaven.

A couple of tricked out Ruger 10/22s. Timney Triggers, Brownell's bull barrel, 25-round clips, Boyd's Stocks, a custom scope out of the Leupold Custom Shop and some high-quality Aquila ammo and you'll be in plinker's heaven.

Everyone has to have a plinking gun, don’t they? I’m talking about tin-can shooting, all-out plinking! Serious stuff. And the all-time favorite is the .22 caliber. It is the king of all plinkers. When you take the kids out for an afternoon of plinking, what do you throw in the truck? When you head out whistle pig hunting, what do you take? For varmints around the barn? A .22 of course.

If you think about it, it is amazing how long the .22 has been the king of the plinkers. Look at other calibers. The old .30-30 Winchester used to be the king, then the .30-06, but every outdoor writer wants to relegate them to a spot in history beside the dinosaurs. Then popped up the short mags, then the all-around .300 Win Mag. Now it’s the 6.5 Creedmoor. But ever since my dad was a kid, the .22 has held its No. 1 spot as the king of the plinkers.

Plus, I think the ever-popular Ruger 10/22 has vastly helped the popularity of the .22. The 10/22 has to be the most trick outable (is that a word?) gun on the market. There are 52 million different after-market gizmos available, aren’t there? Twenty-five shot clips, Boyd’s Stocks, Timney triggers, Brownell’s has some cool bull barrels and the list goes on and on.

In the old days, you could grab a brick of shells for $10 and shoot all day. And now that prices have dropped, they’re again super affordable. I’m a big believer that practice makes perfect, so I think plinking with a .22 is a great way to improve your shooting skills.

Plus, they aren’t very loud. I’d advise having your kids wear ear plugs, but I don’t think it is really necessary.

So let’s say you’re in. What do you shoot? There are some fun targets for your kids to shoot. There are ground targets that bounce around, spinner targets or ones that kids really like are the Birchwood Casey Shoot N-C targets. They’re made of a certain composition that when you hit the target there will be a .50 cal florescent color hole. Kids love seeing this. Or save up tin cans and take a bag full of them out to shoot or fill plastic bottles with water.

One word of caution. A .22 is a real gun so make sure you have a backstop. A hill or whatever. You don’t want bullets skipping across the prairie. Hunting and shooting is a blast, but it sucks the fun right out of it if someone gets shot. Remember the old Winchester saying, “All the pheasants ever bred cannot repay for one man dead.”

Everyone has a budget, but you’re going to be shooting small targets and if you slap on a cheap scope then you’re going to be frustrated. Check out some of the Riton Optic scopes. Your .22 will be a lot more fun to shoot with a good scope.

So the moral to this article? Buy a .22 and go out plinking and have fun!