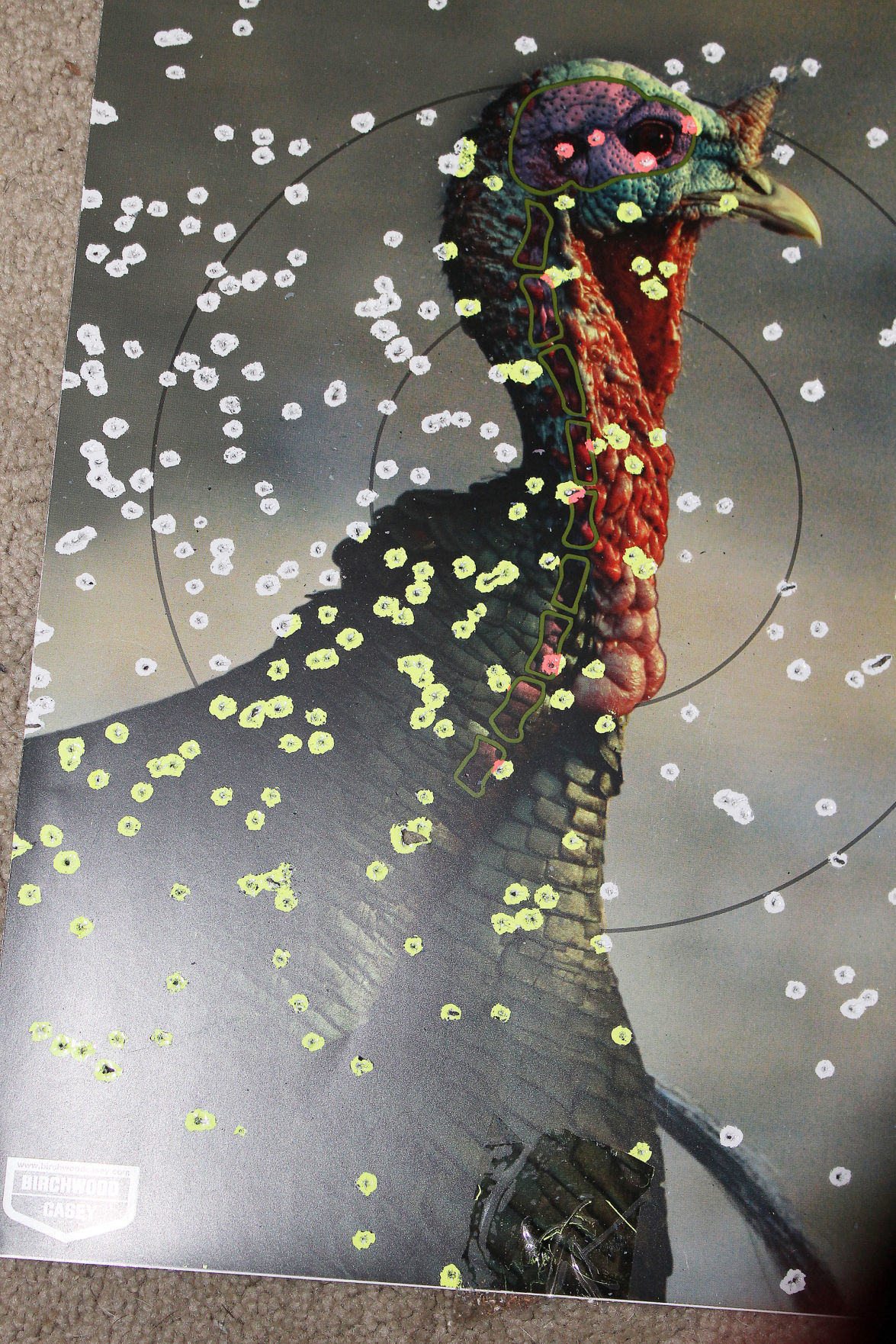 At 40 yards, it got 98 BBs in the kill zone. And you can tell the main pattern is actually a little to the left, so I should have had 110 BBs.

At 40 yards, it got 98 BBs in the kill zone. And you can tell the main pattern is actually a little to the left, so I should have had 110 BBs.

Turkey season is upon us. You better be getting prepared. Digging out your decoys and calls and starting to scout tops the list of important items. But don’t forget another big item — picking the right shells.

Years ago, I used leftover 4-shot from pheasant hunting or 2-shot from goose hunting (in the old days when we still shot geese with lead shot). Then I met HEVI-Shot. They’ve turned turkey hunting on its nose.

It used to be 30 and 40 yards was the max you’d shoot at a gobbler. Now 40 yards is a chip shot and 60 yards isn’t impossible. That last 20 yards is huge. How many times in the last few decades have gobblers held up right past 40 yards on you?

In the old days, I never thought about sighting in or patterning a shotgun and I sure never entertained the thought of using a scope or sights. But with the distances that we can shoot now, you need to consider all of the above so let’s discuss these topics today.

Most shotguns come with one or two beads, right? And that works for shooting doves, quail, chukars, etc. But on turkeys, you have to aim at a body part. Here’s why I say this. With bird hunting, you probably use an improved cylinder for quail and a modified choke for doves. For turkeys, you’re not even going to use a full choke but something tighter. This spring I’m using a HEVI-Shot Hevi13 Turkey Choke Tube System.

When you’re using a choke this tight, I don’t want to over exaggerate and say it’s like shooting a rifle, but it almost is. So you’ll need to aim at a body part just like when deer hunting. Let’s say the bulk of your BBs will hit within a 16-inch circle at 40 yards. You would like to have them all hit in his head. But since you have a pattern, if you aim at the head, 50 percent of the BBs will whiz harmlessly over his head. So aim about 6 inches below the top of a gobbler’s head. That way the bulk of the BBs will hit him in the head, neck and heart.

Nowadays there are a number of turkey loads offered on the market which are better than what we used to have, but HEVI-Shot shells are head and shoulders above the others that I’ve tested.

I favor their blend that has 5, 6 and 7 shot. You may wonder why they include 7-shot? Well, the 7-shot gets a dense pattern and the 5s penetrate and kill better. I went out shooting last Friday and got 97 BBs in the kill zone on a turkey target at 40 yards.

The main pattern was a little to the left so if I had hit dead center, I would have had 110 BBs. That’s devastating!

So to make sure that it is clear, it’s imperative that you pattern your shotgun so you know where it’s hitting. You wouldn’t get a new rifle, grab a box of ammo and go deer hunting before you sighted it in, would you? It’s just as important to sight in your shotgun for turkey hunting.

You see a lot of sights and scopes advertised for turkey hunters. I don’t have them yet but when you start shooting out to 60 yards., you should get one. I rationalize it away because I’ve shot my shotgun a lot and know where it hits, but I’m sure I’ll make the switch soon.

The easiest way to pattern your shotgun is to make a mark on a big piece of cardboard. Shoot and then determine where the thickest part of the pattern is at and adjust accordingly. Then put up a turkey target and practice until you’re comfortable with where it’s shooting.

As we close, even if you use some good turkey loads, if you don’t know where your shotgun is hitting, you still won’t kill one. Sight it in.