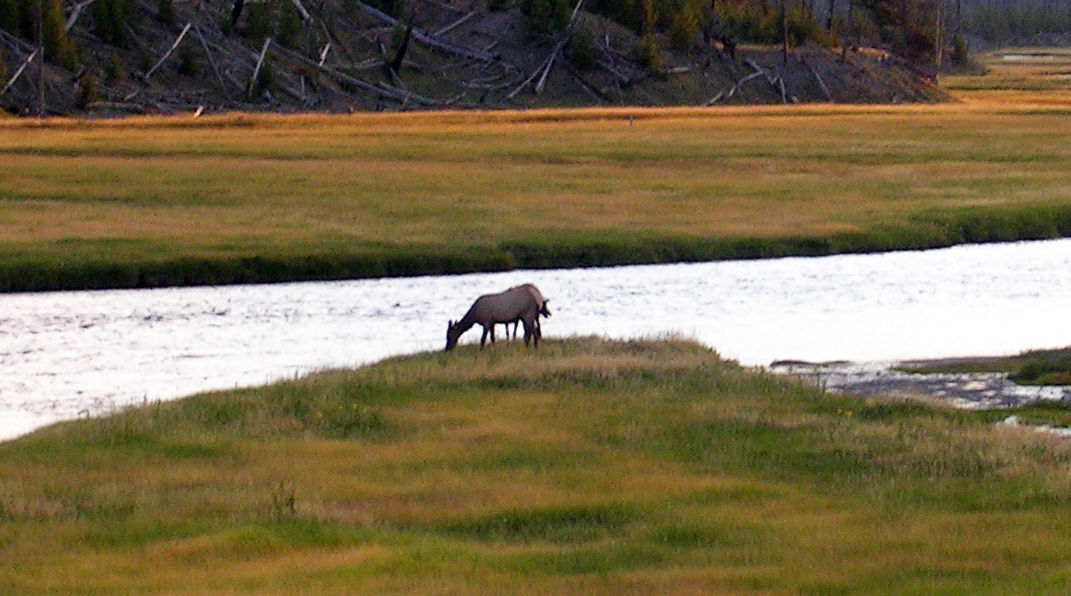 An elk in the meadows across from the Madison Campground in Yellowstone National Park.

An elk in the meadows across from the Madison Campground in Yellowstone National Park.

My father once told me about a trip he and some of his friends took to Yellowstone National Park in the late 1930s. They stopped to look at a bull elk with an impressive rack that was lying down in the meadow a couple of miles from the Madison Junction.

One member of the group wanted to get a picture of the bull but wanted the elk to stand up so the picture would show how truly big he was. At that time, there was a bridge between the road where the boys were and the island where the bull elk was lying down.

My father offered to cross the bridge and try to get the bull to stand up. So, with a pocket full of small rocks, my father crossed the bridge and embarked on the most ill advised adventure of his young life up to that time.

The bull seemed to explode to his feet on a dead run at dad. Dad turned around and ran for the bridge. Although dad was one of the fastest high school 100-yard dash track stars in Idaho, the bull elk was gaining on him fast.

About half way back to the bridge, dad’s glasses fell off his face and he could no longer even see the bridge he was running toward, so he just kept running as hard as he could.

At this point he could actually hear the bull almost on top of him when he ran right into the Madison River. He swam as hard as he could, hoping the opposite shore was somewhere in front of him and the river would either stop the bull elk or at least slow him down. The bull followed him into the river until he was up to his shoulders and stopped, while dad continued to try and find the opposite bank, which he still couldn’t see clearly.

The other boys called to him and guided him to the bank, where they helped him out of the river. As they left, the bull elk was still in the middle of the river shaking his head from side to side.

The boy who wanted the picture got a great photo of the bull in the middle of the Madison River, but dad declined a copy of the picture when they returned to Blackfoot, which was where the pictures were developed.

When my father showed me the place where this incident happened, there was no bridge connecting the meadow below the road to the island the elk had been resting on. Maybe the park officials became aware that people would cross the bridge to get closer to wildlife and removed the bridge.

That experience was one my father really took to heart and he would never let any of his children get anywhere near wildlife on trips to Yellowstone or any other national parks we visited.

He even cautioned me to never take anything for granted on hunting trips for deer and elk.

While staying at the cabins behind the hotel at Lake a few years ago, my wife, Ann, took an early morning walk and found herself between a bison and her calf as she came around a corner on the trail. The bison just raised her head, looked at Ann like she owed her money and then went back to grazing. Ann backed off and returned to the cabin to warn the rest of us that there were bison close to the trail.

Having grown up in the Rocky Mountain Northwest, it is hard for me to understand why anyone would think they could get close to wildlife such as bears, bison, elk, moose, and deer, etc., without possible painful repercussions.

One cannot get through the gates into Yellowstone or any other national park without receiving a brochure that warns of the danger of approaching wildlife too closely. Yet every year people are injured in our national parks because they won’t take good advice. Then they irritate wildlife by coming too close to the animals that they are trying to photograph or get a closer look.

If you get a chance this summer, I encourage you to visit our national parks and enjoy the natural wonders they offer. Just keep your distance from the wildlife and use a telephoto lens to get those close-up pictures.