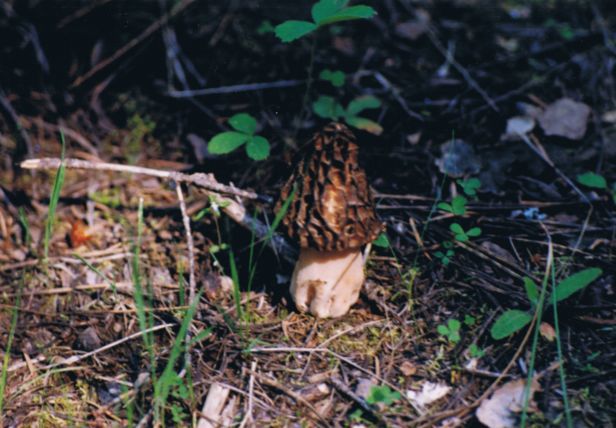 Right now is one of the best times of the year: morel mushroom picking time! It is a short season, so you want to make sure that you don’t miss it. In Nebraska and Iowa, it is somewhere around the middle of April. Up in the mountains, I do good around the first or second week of May, and they start popping up after that as you go up in elevation.

There are a lot of edible wild mushrooms, but I only can identify a couple. A few years ago, I thought, “It’s crazy to spend all that time walking around and only be able to identify a few varieties. Why not take a class so I could come back down from the mountains with more?”

Here’s the deal. Morel mushrooms are the best tasting food in the world, but if you screw up and pick the angel of death, well, let’s just say that you and God had better be pretty good friends. In a nutshell, one little snack is not worth dying over, so the first few times go with an old timer. Today I’m going to cover how to find morel mushrooms. I’m not going into how to identify them; find a trusty old timer and have them coach you.

Where do you find them? A lot of writers confidently say something like, “Go to the woods and look around dead logs.” I’ve got news for them. The woods are full of dead logs and you don’t find a morel at every one. While you can find some around logs, not every log has morels. I’ve hunted morels for more than 40 years. By now, you’d think I’d have it down pat and could give you the “Five Steps to be a Morel Mushroom Hunter.” The problem is I can’t.

But let’s go over a few things that I have learned. In Nebraska and Kansas, I find them on sandy river banks. I’ve made hauls out on islands and in the woods along the river. Again, not in wet turf but kinda sloping drained areas.

In the mountains, I’ll find them on the uphill side of old logging roads and in slight drainages that have some spread out vegetation but not thick grass. I’ll find them in brush piles. My old hunting buddy Roger Ross says he likes to look around Tamarack trees.

Sometimes they’ll be found around fresh (from last fall) caterpillar tracks. It seems like torn up soil promotes their growth. If you find some, look downhill. The spores get washed downhill. One year after a fire, I found a bunch like this washed down a draw on a mountainside.

If you found some last year, go back there this year. It’s not a guarantee every year but almost. I have one spot that I find them at almost every year, but not last year.

They are really temperature and moisture dependent. When the weather finally turns warm, if you get a rain and a warm night it seems like they pop up overnight. A few years ago, I was talking to a Forest Service employee, and we were talking about mushrooms. She brought up the thought of taking the temperature of the soil when you find them. Then just this week I read an article and the writer said when the soil hits 50 degrees, they start growing. Maybe so.

The absolute best place to hunt them is in places where there was a forest fire the previous year. There was one place where I could fill two 5-gallon buckets. Under a lodgepole pine that was laid down, I found 17. In one area I could have covered with a 10- by 12-foot tarp, I picked 162.

Real pickers use a mesh bag so the spores can drop out. They also use a knife to cut them off at the ground.

When you get home, slice them lengthwise and gently rinse and put in a bowl of water with salt to kill the bugs and set over night in your fridge. Dip in beat eggs and roll in flour. Sprinkle with salt and pepper or my favorite is Tony Chachere’s seasoning and fry to a golden brown.

Morels are the best food in the world!