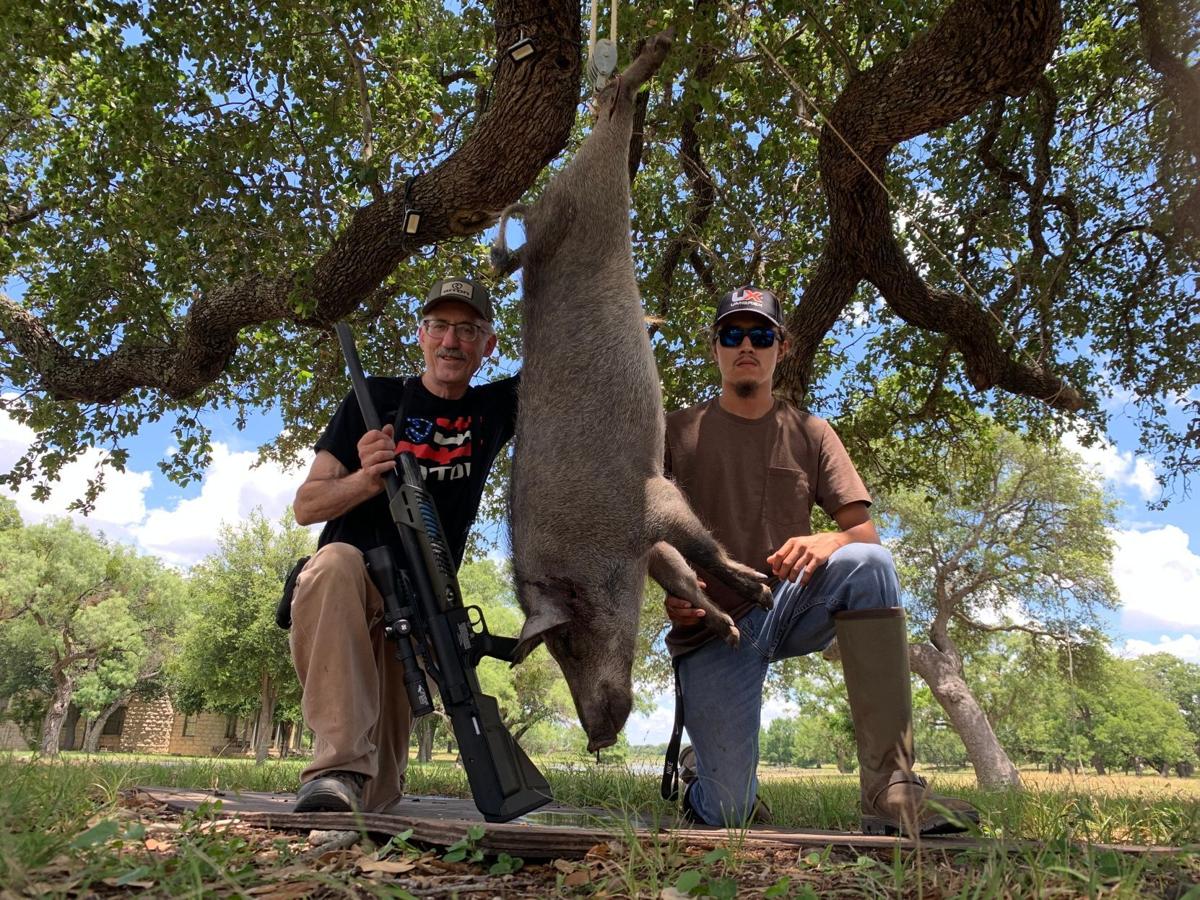 Tom Claycomb, left, and Eddie Gonzales posing by the hog that was dropped with a Umarex .50-caliber airgun.

Tom Claycomb, left, and Eddie Gonzales posing by the hog that was dropped with a Umarex .50-caliber airgun.

A couple of weeks ago a good buddy of mine Bill Olson who is the publisher for Texas Outdoors Journal lined us up an airgun hunt with Adventures Missions Recreation Properties on one of their ranches in Menard, Texas.

I was going to use the new Umarex .50-caliber Hammer on axis deer and then switch to the Umarex Air Saber and hog hunt.

The air saber is like an airgun that shoots arrows-at 450 fps. That’s fast.

The hunt gelled fast due to the quality of people making it happen. Bill called me Wednesday and told me to grab a plane ticket and fly into San Antonio the next Tuesday.

D-Day soon hit and Air Olson (Bill’s truck) picked me up and we were off. We stopped by Uvalde to meet Bob Zaiglin, whitetail deer extraordinaire biologist.

I hadn’t been to Uvalde since years ago when right after the bell rung, I got thrown under my horse and he stomped me pretty bad. Ended up in the hospital in San Antonio.

The next morning we headed to Menard and met our guide Robert Shipman and owner Scott Huggins. We sighted in our guns and then jumped in a blind. We were going to hit the axis deer and Aoudad sheep first and then hogs.

We set up a Slow Glow to get the hogs coming in and were going to give it a few days to get hit. But sometimes schedules get changed up when hunting. Robert and I were doing a spot/stalk hunt for axis deer. If I remember correctly it was the middle of the day and the sun was up and it was warming up.

By now the axis would be bedded down under a mesquite tree or live oak. We were creeping along stopping ever so often to glass with our Riton Optics 10x42 binocs. No need for a spotting scope because half the time you couldn’t see 50 yds.

We must have been moving along pretty quiet because we got within 20 feet of a boar on his bed under some brush. He shot out like a bullet and Robert hissed hog!

When spotting/stalking I keep my scope cranked down to 4x so I can take a fast shot. If something is way out there you should have time to crank it up.

I threw up my .50-caliber Hammer and hit him in the rear end. The big 350 gr. slug flattened him. Impressive.

But in a hot second he jumped up and charged downhill straight at us. Robert yelled he’s charging.

I jacked in another pellet and leveled out again. He was coming down the slope at a full charge. The brush stopped about 10 feet from me. I didn’t want to shoot at him in the brush and take a chance of the bullet deflecting so I was going to wait until he hit the edge of the brush. At 10-15 feet he went down.

I don’t know if he stumbled and fell or what but I shot him again right fast and ran up and shot him behind the ear with my .44 mag and he was down for the count.

Wow, that was exciting. Don’t even have to go hog hunting in Texas, they come hunt you!

We drug him down to where we could get the truck to him and took him back to the lodge and hung him up. We took pics and then skinned him out right fast.

I had a prototype of the new Professional Boning Knife that Knives of Alaska is just coming out with. I’ve been working with them on developing it so am excited to see it hit the market, probably by the time this article prints.

I whipped out the new knife and in a few minutes we had a pile of meat. Upon getting home I smoked the forequarter and wow, it was the best smoked ham I’d ever had.

Katy and I made chopped BBQ sandwiches and the forequarter didn’t last long. Now I can’t wait to go get another hog. That’s the first big game animal that I’ve killed with an airgun. I’m hung.