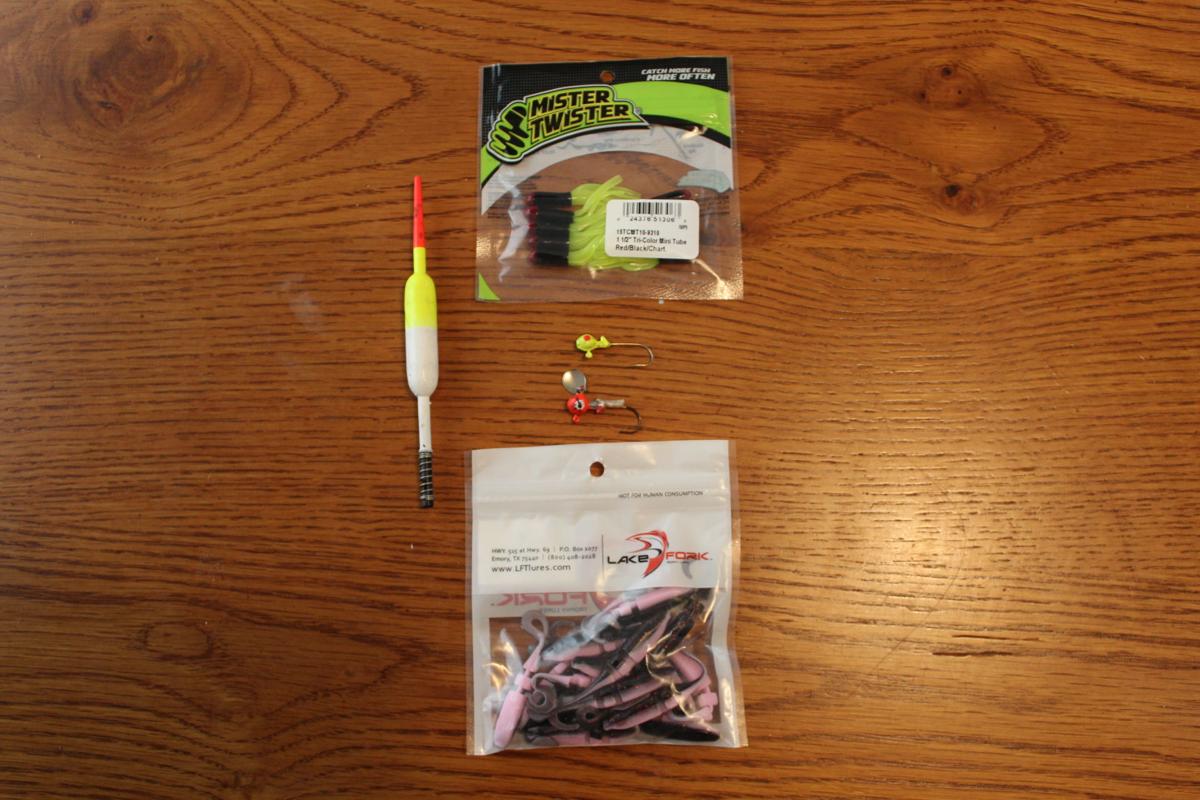 The tools of the trade are pretty simple for crappie fishing. Jig, plastic tail and a bobber and you’re good to go.

The tools of the trade are pretty simple for crappie fishing. Jig, plastic tail and a bobber and you’re good to go.

Either I’m a miserable planner, I’m too busy, or PETA is plotting against me so I can’t get out and harvest some organic fish!

This marks the fourth week that I’ve been trying to go crappie fishing. OK, most of the delays have been weather-related. It’s hard to get in the crappie fishing mood if it’s snowing, if it’s cold or if there are gale-like wind conditions, but I’m going this Friday no matter what.

A buddy caught quite a few perch four weeks ago, so if the crappie aren’t biting, no biggie, I’ll go hit them. Here’s the conditions that we need for the crappie fishing to get hot. The experts say that crappie start moving out of their wintering holes when the water temperatures hit 45-50 degrees.

At 55, they stage off their spawning grounds. For us here in Idaho, that means they’ll be out in the channel in about 30-40 feet of water.

I like to hit the lake a few days early because I don’t want to be late for the spawn, plus you can catch fish before they move in. When I’m jigging out deeper, I’ve noticed that they’ll be biting super-light. I flip my jig out as far as I can and let it sink to the bottom. To aid in sinking, I clip on a small split shot. When it hits bottom I slowly pick up the rod tip and then let it down and reel in a half crank. Repeat all the way back to the boat. I’ll have them hit all the way back to the boat. Whether they followed it off the bottom or are up high suspended, I don’t know.

I’ve never liked using them, I thought they were for gunsels, but a couple years ago I started using Crappie Nibbles. I like the Sparkle ones. Put one or two on your hook and it will increase your hits big time.

A lot of times I’ll hook a worm on and flip it out the back of the boat. I just use a medium-sized split shot to get it to sink. Over the course of the day I’ll pick up another 15 fish on this set-up. Catfish, perch, crappie and even some bass.

If by the time you get out, they are already up along the bank spawning, here’s how to catch them. I put on a thin pencil bobber and about 12-18 inches below a small jig. I’m sure some colors are better than others but I use red, yellow or chartreuse. Then put on a plastic like the Lake Fork Trophy Lure Co. Boot Tail Baby Shad in the 2 1/4 inch size or Mister Twister Black/Chartreuse tube jigs.

Flip the above set-up right up against the bank, like 12 inches away from it. I don’t know why it matters but I do a lot better if I use pencil bobbers as opposed to the old red and white round bobbers. Keep your line semi-tight so if one hits you can react immediately. You don’t want to jerk it and rip his lips off, but pull up the tip of the rod and start reeling.

Many times the bobber will barely start skating along the top of the surface. You’ll have to use your own judgment as to whether to wait to set the hook or let him take it better. It seems like half the time you’re wrong.

So you’ll have to judge as to which lake you’re on if they’ve moved up and started spawning already or if they’re still staged out further. Next article hopefully has some pics included with a table full of crappie!