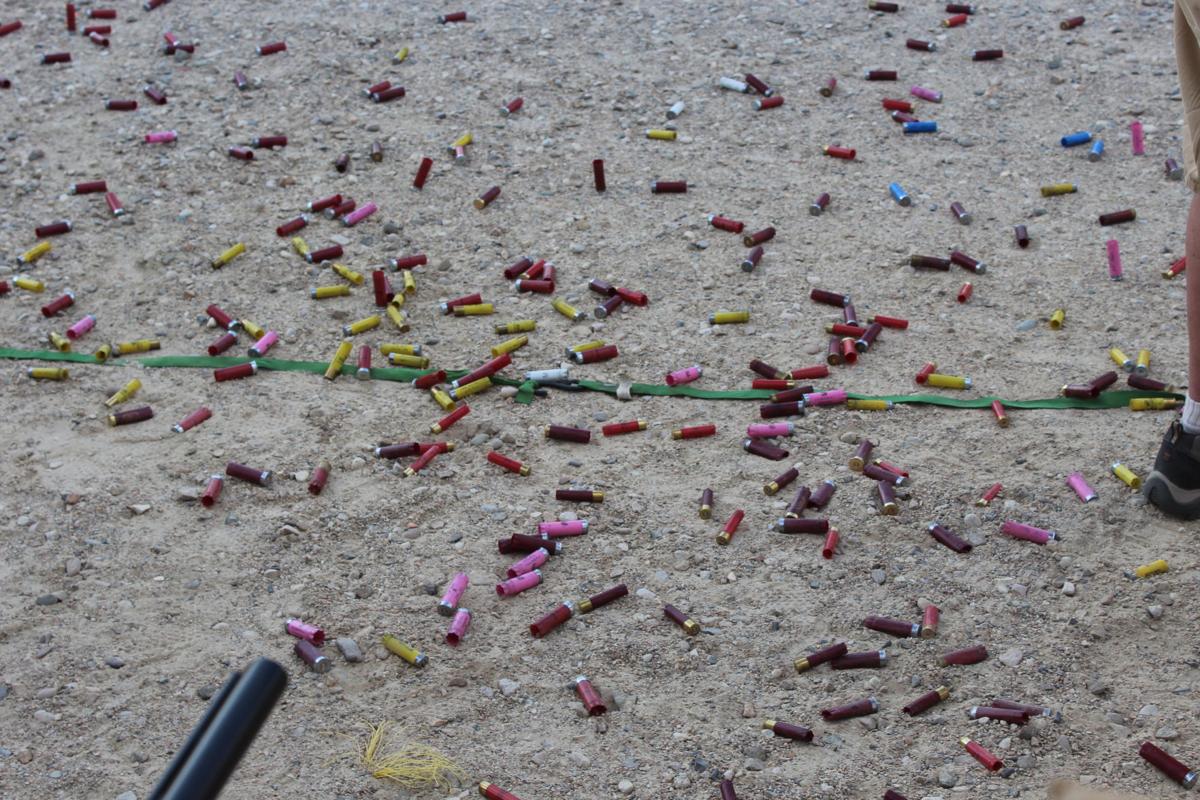 The pile of shells tells it all.

We have a shooting event every summer that I can only describe as Combat Trap Shooting. It’s a blast. You ought to try it sometime with a group of friends.

I help with a camp every May called the Scooter’s Youth Hunting Camp. The camp takes a lot of work but is more than worth it. It’s one of the coolest events I do all year.

In June, the founder, Scott McGann, puts on a potluck picnic for the volunteers. Of course we eat and shoot the bull and have a good time. This year, everyone brought desserts and side dishes and Famous Dave’s BBQ catered smoked pork ribs, chicken, beans and potatoes. It was a great dinner.

But the highlight of the night is the trap shoot. Here’s how it runs — we set up four throwers in a row. Eight shooters line up on the firing line. I don’t know how we ended up with eight but that seems like the perfect number and it works great.

Then the throwers start throwing birds. They throw them as fast as they can and us shooters shoot away. You’re shooting as fast as you can. Run out of shells? No one is going to wait on you. The clays just keep flying. You’ll be grabbing shells and dropping them while you’re trying to cram them into your gun. It works best to wear a pouch on your belt to carry shells or a shooting vest. However, a vest doesn’t hold enough shells. You have to be wired to the max.

So because of the nature of the fast shooting and vast amount of shooting you’ll be doing, I like to use a semi-auto or I’ll miss out on too many shots. I used an Improved Cylinder choke this year since you need to try to take as fast of shots as you can so you can try to shoot first. Although many times you get a shot at a lone bird that escapes and is out a ways by the time you get a shot. But still, the Improved Cylinder worked out fine even on the long shots.

I forgot to take my plug out but I guess it didn’t really matter. Pretty soon your gun is so hot that you have to quit shooting anyway to let it cool down. Without a plug, you’d just have to set out faster. So you could justify bringing two or three guns.

Here’s why this event gets you so wired up. Not only do you have to hit the clay bird but you also have to beat the guy standing next to you or the clay is already dusted.

By the time the event ended because we ran out of clays, everyone had gotten their fill of shooting. It was a blast. Next time you have a get-together and can’t think of a good activity for everyone to do to pass time, you might just want to consider putting on a Combat Trap Shoot. I’ll forewarn you, though: You might just end up finding a new sport that you’re going to be addicted to.