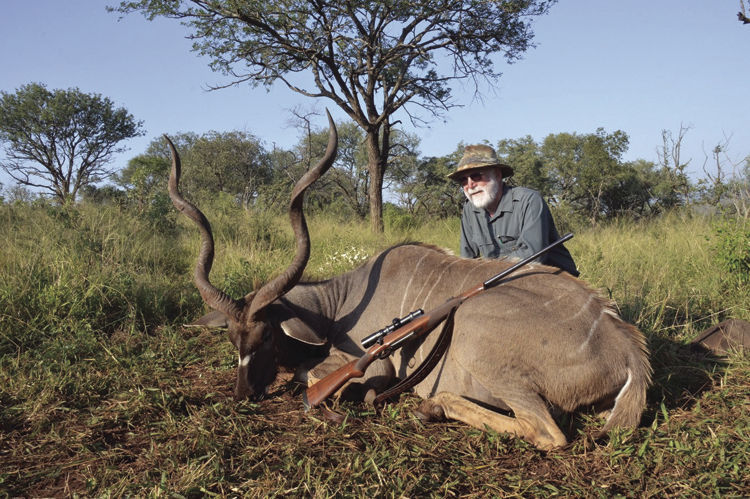 Hunter Geoff Hogander with a Kudu he took in Africa. 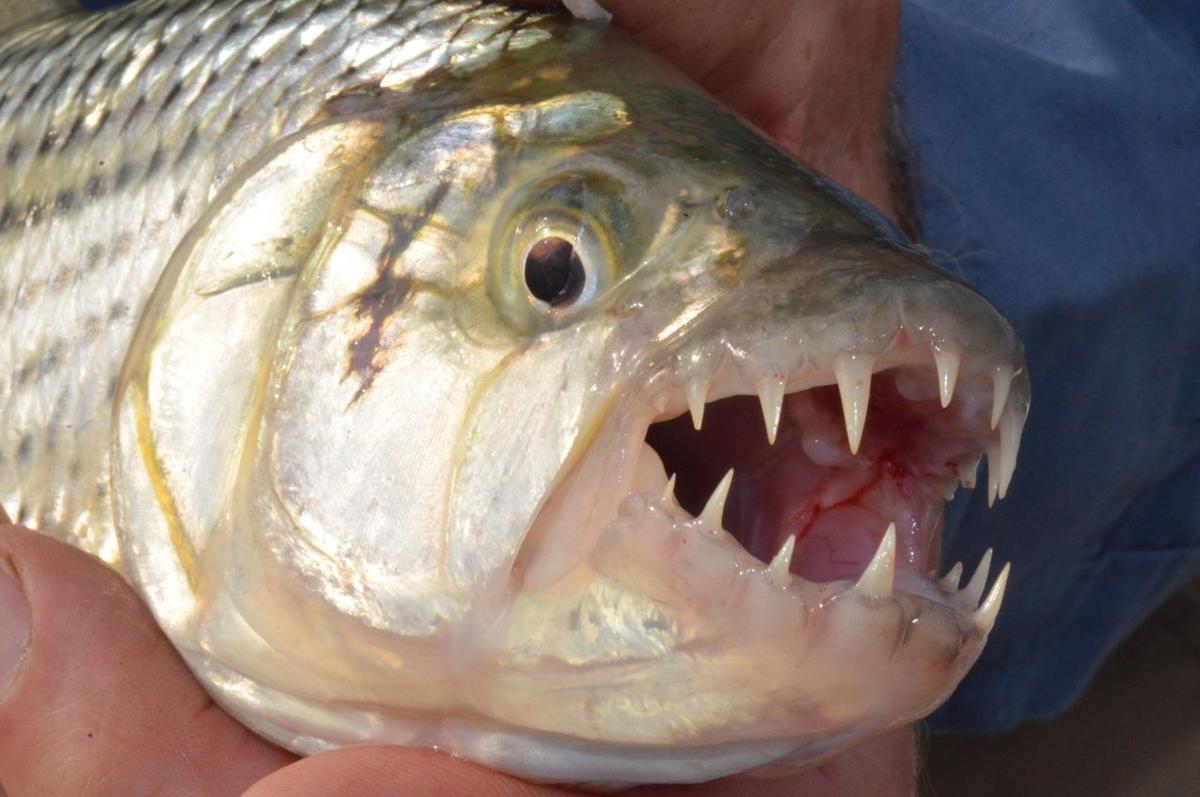 Tiger Fish in Africa have razer sharp teeth and can inflict serious wounds.

Giraffe are ever present in Africa. 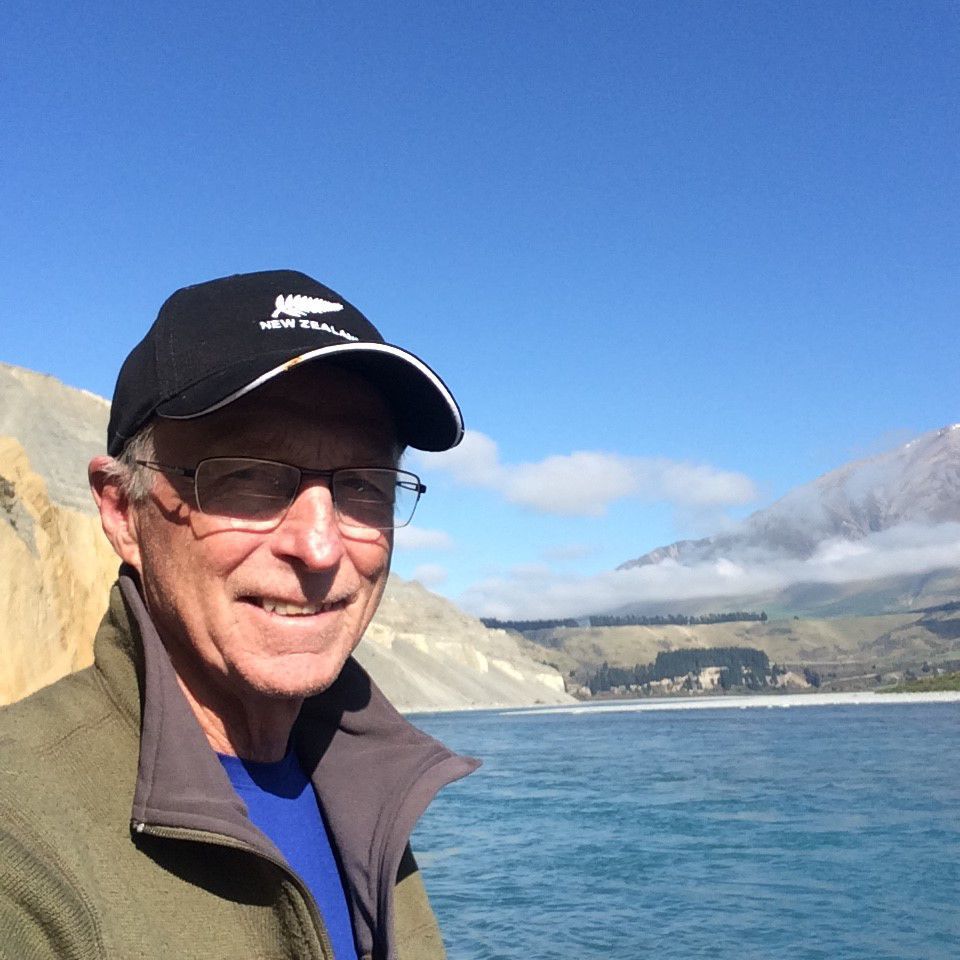 Hunter Geoff Hogander with a Kudu he took in Africa.

Tiger Fish in Africa have razer sharp teeth and can inflict serious wounds.

Giraffe are ever present in Africa.

Geoff Hogander’s dream was to visit Africa; catch a tiger fish, hunt a kudu and find a geocache. When the opportunity came to join me on a hunt to South Africa with Harloo Safaris in Zululand and visit Tembe Elephant Park next to the Mozambique boarder he was all in.

Zululand in South Africa is tropical jungle country with rolling mountains, deep draws and rivers. The safari area bordered Lake Jozini, known for its superb tiger fishing. Our hunt was the first part of the trip, fishing second and Geoff’s geocache hunt and wildlife viewing in Tembe Elephant Park the wrap-up.

We booked the hunt for the end of May when kudu are in rut. Kudu are called the gray ghosts of Africa for their ability to elude hunters. Similar in size to our rocky mountain elk they are wary. The best time to hunt them one time is when breeding season is in full swing.

Geoff’s chance at a kudu came on day four of the hunt. Glassing a ridgeline a mile away he saw a single bull slowly working his way through the woods. It would cross an open area a half mile ahead where we could intercept it. Thirty minutes later our professional hunter, Niel Uys, had us in place and Geoff glimpsed the kudu moving along the edge of the clearing.

The massive bull crossed the opening 100 yards away and dropped with Geoff’s shot. We marveled at the long spiraling horns and it beautiful grey coat. It is truly one of Africa’s iconic antelope. Two days later we were enjoying Kudu tenderloin over an open fire at camp. They reminded me of mild, tender elk steaks.

Next door the Phinda Game Reserve was culling nyala. They are mule deer size antelope, sporting a shaggy dark gray coat, white strips and black spiraling horns they are exotic. Phinda’s game manager asked if were interested in hunting nyala.? You bet!

In Africa when antelope start to overgraze an area, game managers use hunting as a tool to save the habitat and provide meat for local tribes. The one drawback was lions. We needed to be very careful since this conservancy had a thriving lion population along with cape buffalo and rhinos.

Parking our Landrover in the early morning light the adventure began. Nyala live in dense cover along the edge of grasslands. The local game manager lead the way along trails weaving through dense cover. Luckily, lions do not like hunting in this type of cover. We were very cautious since we had seen a pride of lions when driving into the area.

The game manager knew exactly where nyala crossed the opening in the dense cover. Each of us made good shots and nyala and the animals were on the way to the butcher by noon. We enjoyed several prime cuts of meat for dinner. It was delicious.

Sprawling Lake Jozini bordered our hunting area and is a tiger fishing mecca. Tiger fish are fierce predators with razor sharp teeth and are sought after by anglers for their fighting ability. A member of the piranha family, their canine-like teeth can inflect serious wounds.

Fishing with sardines was the most effective way to catch the toothy fish this time of year. Niel, our professional hunter, had a supply in his freezer. An avid angler, he supplied the boat, bait and tackle, and took us to his favorite fishing spot. The 8-pound to 15-pound tiger fish were not biting now, but we would catch plenty in the 3-pound to 5-pound range. Only he would handle the fish. He didn’t want us going home minus fingers!

Geoff got the first strike and the line ripped off his reel as the tiger fish headed toward the other end of the lake. It turned out to be the best fish of the day. We took pictures and released it.

Our only problem came at the boat launch. A 4,000 pound white rhino, measuring 10 to 12 feet long and 5 feet tall at the shoulder, grazed at the waters edge. Geoff and I did a double take. A rhino grazing next to the boat launch ramp? Welcome to Africa.

We traveled 150 miles north to the Mozambique border to Tembe Elephant Park. No trip to Africa is complete without getting a look at some truly wild country and elephants. Plus, Tembe held Geoff’s geocache.

The Tembe Tribe run the only concession in the 115-square-mile massive transnational Tembe Wildlife Park. Part of the legendary Ivory Route where the greatest tuskers roam, the park was set up in 1983 to protect migrating elephants between South Africa and Mozambique. It’s a wild and unique place. It’s on the low end of the luxury scale, on the high end of wild and one of the lowest-priced lodge experiences in Africa.

Each morning at 6 a.m. we loaded into a converted Landrover to slowly drive through thick sand-forest. Twice elephants materialized out of the impenetrable foliage halting our vehicle. They gave us a brief look and walked right by us disappearing into the jungle.

Geoff’s geocache was located under the step of one of the Tembe wildlife observation blinds. Geocaching is an international activity in which participants use their GPS to find a hidden container and it’s one of Geoff’s favorite sports. Once he found it, he carefully removed the ledger and inscribed his name and the date on it, completing a life-long dream of visiting and achieving a series of goals in Africa. Harry Morse

Find a video with this story at xtremeidaho.com

Harry Morse is currently a freelance writer living in Pocatello. His articles have appeared in national hunting and fishing magazines. The majority of his career he worked for Washington, Idaho and California Departments of Fish and Wildlife as an information officer. He has travel broadly an enjoys photography, fishing and hunting.